Tracks past the cabin 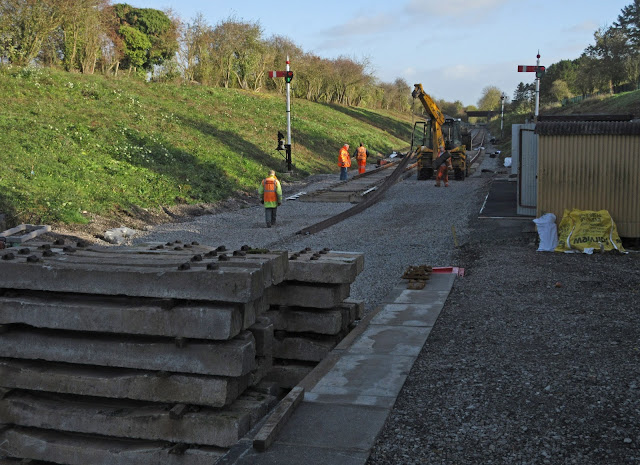 The forecast was for strong winds, followed by rain in the afternoon. Our compact gang hastened to Broadway after only a single cup of tea and a single (well alright, two) dunking biscuits, to try and get something down before it all got too miserable.
You can see here the fruits of Steve's preparatory labour yesterday. Anticipating that the Telehandler would be in use at Winchcombe with the 'chair persons' there today, he brought up these two stacks of concretes yesterday afternoon, and we were glad of them. This morning he arrived with two rails for them as well. 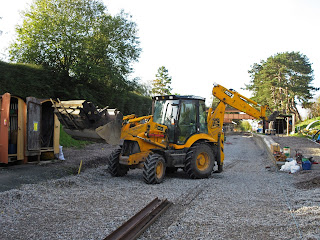 At the other end of the JCB Steve had grabbed three units for the barrow crossing that we will install about where he is positioned in the photograph. They're in the front bucket. 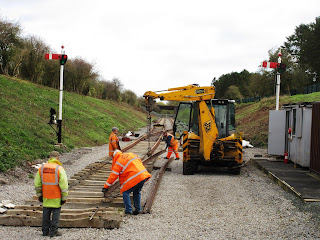 We were soon busy laying out those stacks of sleepers. First on the Malvern side, where 26 laid in a row were enough for that pair of rails Steve brought in.
Just the 6 of us today then - four on the ground, one in the JCB, an one behind the camera (sometimes). It's best to stand well clear when the rail is lifted in. Rail is moody, and does funny things. 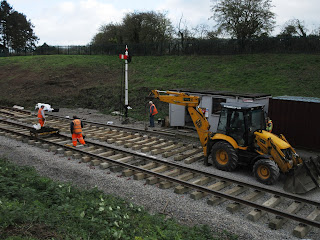 We got the first length in on the Malvern side, and then had to go back to the Cotswolds side to lay a parallel piece. We now have to keep alternating, otherwise the JCB will be too far away to lift the rails in end on. It's already a challenge, but we manage by using a fulcrum to move the far end about, and then lifting the near end into place. Clever stuff.
In this picture we are laying track right across the entrance to the Broadway group's container - that must have been a surprise! 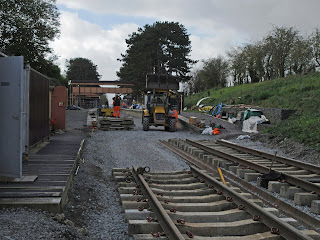 Here the first two lengths of the day are in, one on each side. They still need clipping up, a long and slow job, and with our small gang we could only do the bare minimum to make the rail secure, in between JCB arrivals. 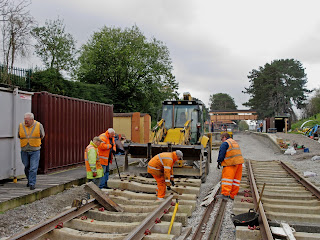 After adjusting the direction of the previous length a bit, we carried on with the next one. It's important to get the end of a length in the right spot, as the next sleepers laid will follow it, and if it was say 6 ins out, all the next length will be too. Of course the whole thing has to follow a curve, and hit the right spot as we arrive at the platforms. 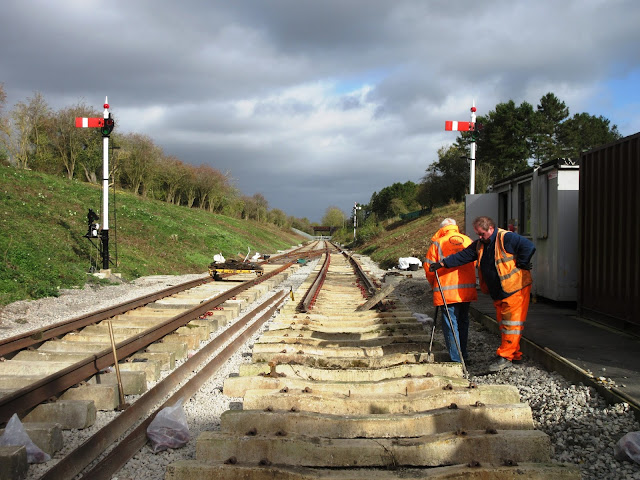 The sleepers are brought in by Steve and slid off the end of his wobbly forks. Because of this, they end up higgeldy piggeldy on the ballast, and in this picture you can see the next job, which is to eye them up and bar them into a straight line (or curve, in this case).
The next pair of rails has already been positioned in the six foot. 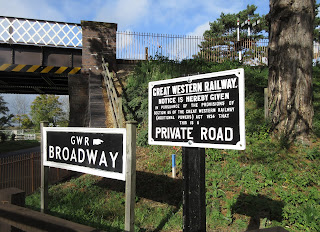 While we were doing that news came of a piece of welcome heritage just placed at the bottom of the station approach. It's a 'GWR PRIVATE ROAD' notice. We have been hunting around for two of these for a while now, and were successful at one of the railwayana auctions recently.

Our station approach is a private road too, something we would like to remind people of. And it adds to the atmosphere. We even made sure the post was bullhead! 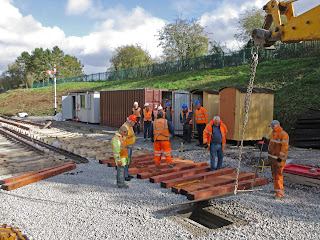 Back to the farm. It now gets a bit tricky, as we are approaching:
a. A barrow crossing requiring special hardwood sleepers with FB base plates.
and
b. A change of rail from FB to bullhead, requiring a different type of wooden sleeper, and cast iron chairs.

The concrete and red hardwood sleepers in the picture will bear a single FB length of rail.


The steel plate protecting one of the catch pits was also removed at this point. The pit will be built up with more rings, and finally covered by new concrete lids. From now on, there is no longer a risk that road vehicles will fall in. 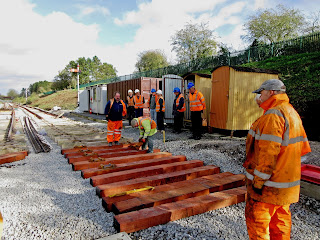 Here are the hardwood sleepers for the barrow crossing laid out in a row.

The spacing between them is different and has to be very accurate, otherwise the rubber crossing units that go on top won't fit.

By now we have attracted the attention of the Broadway gang.... 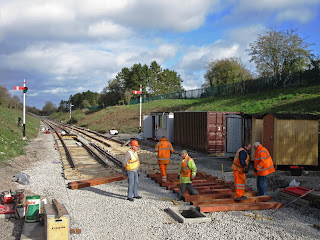 We also had a special visitor today: Garry Owen, former head of PWay, and former chairman of the company.

Garry was in on the earliest days, and saw many track extensions built under his management. He was impressed by the quality of our work, better than anything in his days, he felt. 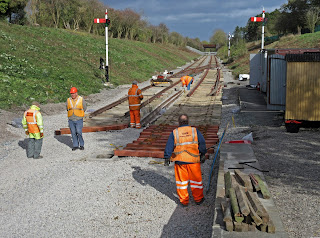 With enough sleepers in for the third length today, Nigel checks the alignment so far.

Are the sleepers in line enough to bed a rail down, and is the curve correct to meet the space between the platform ends? Hmmm.... 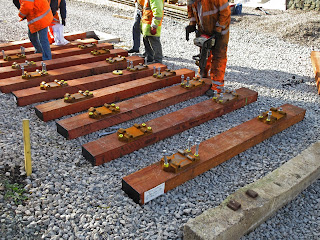 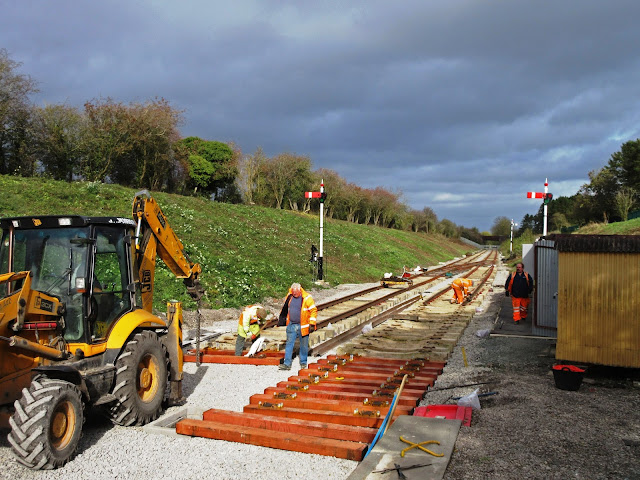 Under an increasingly threatening sky a shaft of autumn sunlight illuminated our site as the third length is readied to receive the next pair of rails. 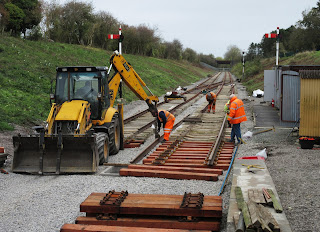 Then, in they go.

One rail is already bedded down on the right, as the second is prepared for lifting on to the left.

The 'Pan 11' sleepers for the platform 2 side of the barrow crossing have also been brought up now. This will go where the JCB is standing here. 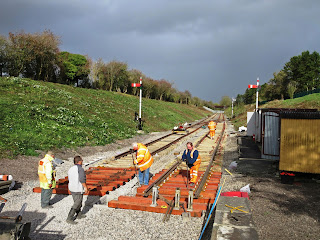 They're in! Both rails on the third length are down, as well as the timbers for the platform 2 side. Steve walks over to see Nigel for a shake down of the day's activities. We can see rain approaching up from Winchcombe, it won't be long now. What's on next Saturday then? 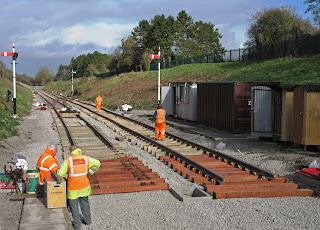 Here's the same shot from the other side. The sleepers are now just about touching the catch pit in the middle. They need their ends sawn off to fit as they are slightly longer than the concretes. 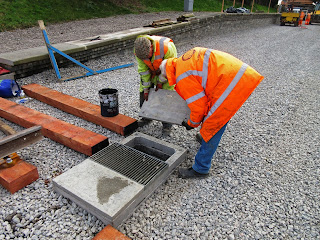 As the catch pit has a rather deep maw, and although there are still 2 more rings to go on them, we decided to fit the covers for the time being at least. 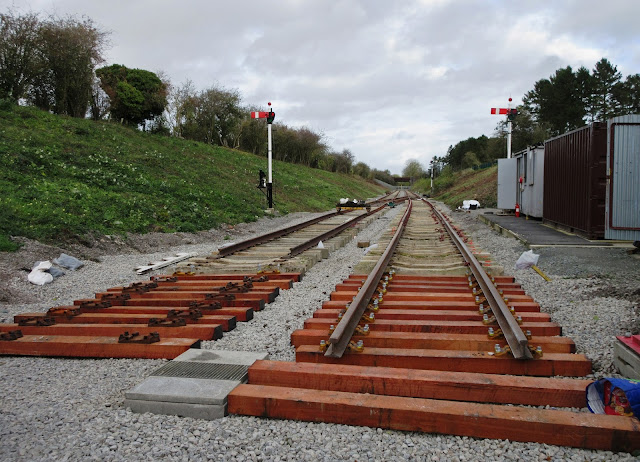 The last shot of the day. The crossing seems quite far back already, as we are about to enter the Broadway platforms. Two timbers are nudging the catch pit and need sawing to size, while on the left we need to find two lengths of rail to match those on the right, as from here onwards we will proceed in bullhead. Second hand on the left, and new on the right.

The new bullhead rail is being delivered on Monday, when we are also doing a pair of ballast runs. Before that, ballasting will continue at Broadway. Busy, aren't we?

And finally, a big thank you to our blog readers:

For the first time ever, the monthly page views on this blog reached over fifty thousand. That's a hell of a compliment! Thank you for your continuing interest in our activities. You can always come and join us, or if you can't, send something to the GWR Trust with gift aid to help us financially.

The blog will continue to be free of ads.