A very busy day at Winchcombe

Full of good cheer the gang started in the mess coach at Toddington, with plenty of tea and biscuits. That's the way to get us going! 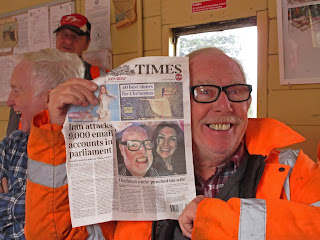 Amid the laughter Bob suddenly produced a newspaper front page and showed it to John, our very own 'Duke' (- of Gloucester is the intention, but mostly abbreviated)

The resemblance was indeed striking, but John took a firm line:


We then split into a Toddington team, and a Winchcombe one. The Toddington team continued with the alignment and levelling of roads 6, 10 and 11 by the shed. Although the inside of road 6 was packed at length using a Kango last week, someone had unkindly tested it with a class 26, and now it was now longer level. Well, what did you expect! 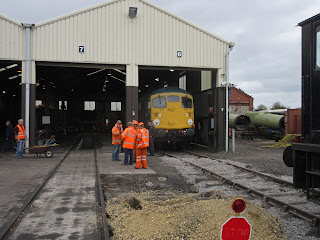 A further supply of ballast was also ordered, and Steve was on hand with his JCB to ladle it into the right places.

Yours truly's first duty was to take the Landie to Toddington, to provide Jim with a new gas bottle for the mess coach. This was a priority of course, otherwise there will be no tea next time. Then on to Broadway, to hunt round for as many bearers as possible for the sleeper team at Winchcombe. 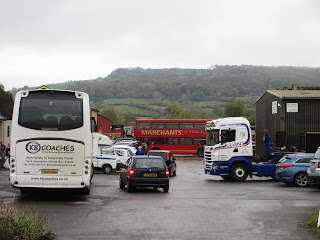 Back at Winchcombe, it was pandemonium. Two large buses and half an artic had conspired to block all access, and the queue of volunteers / passengers trying to get in stretched all the way up to the Greet road. It was engines off, until one of the buses finally managed a multiple point turn at the bottom before trying to exit the narrow appraoch road to the top. Here he met a resident's van parked on the double yellow line. 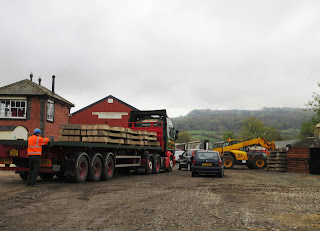 Once inside the yard progress continued to be slow as the yard was filled with two lorries bringing material for the Broadway extension. We managed to zig-zag between the lorry loaded with sleepers and the Telehandler trying to unload it through the traffic. 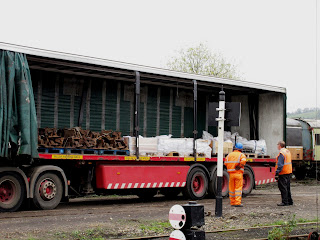 The second lorry, a 44 tonner, was stationed behind the C&W shed, waiting patiently for a Telehandler. Well, we have one of course but it was busy trying to unload the earlier lorry with the sleepers. 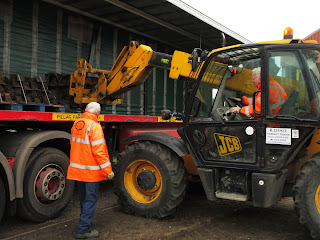 Well into the morning the Telehandler, also trying to juggle requirements to move chaired wooden sleepers around, managed to help the lorry loaded with PWay materials, principally second hand cast iron chairs for the track between the platforms at Broadway. 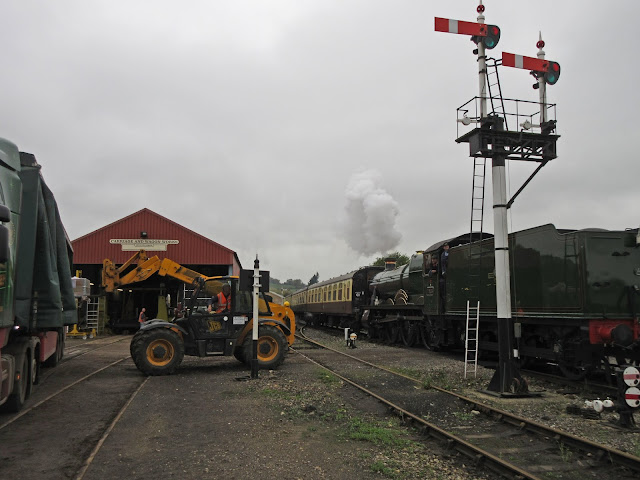 Then, just when you want to pull out with a load of materials for the other side of the yard, a train goes by! It was everything at once today.

During all this time the PWay gang was unable to do anything very much at all, as the Telehandler was a kingpin in the logistics of supplying drilled sleepers to be chaired, and taking away completed ones to put on the pile. Very frustrating, particularly as the gang had been given a 'target' (and we thought we had left that sort of stuff behind when we got pensioned off) of 100 sleepers chaired for the day.

At the end of the morning we had done - six ! What would the Saturday gang say now ? Oh shame... 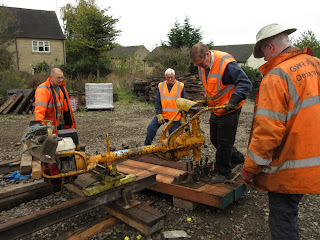 It wasn't until l2 that the second lorry was finally emptied as well that the Telehandler was released back to us, and we resumed chairing up furiously.

One team worked off the end of the little Stumec track (to prevent the derailing experienced on Saturday). 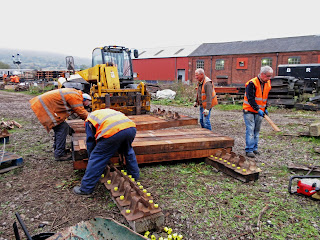 The other worked further down the yard, using the hand held 'Animal' and working off a stack of drilled sleepers that slowly got lower and lower.

In the foreground you can see chairs that have already been brought up and fitted with new yellow ferrules. They are lined up, ready to go. 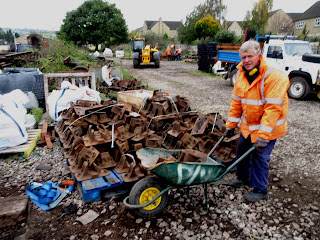 With all the materials coming in, and the surplus bricks from Broadway not yet transferred to B&S on the other side, there was very little space for us and so a large pile of second hand chairs was dropped right by the first work station.
Dave here ferried chairs over in a barrow to the sleepers being worked on. 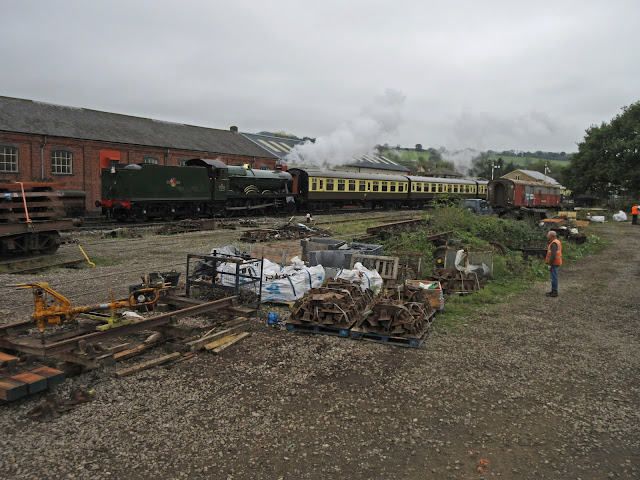 All the time trains seemed to go this way and that, although apparently there was only one steamer out, and the DMU. Sirens sounded in the distance as hordes of children in period dress ran for cover in the platform 2 'air raid shelter' waiting room. So that's what the buses were for. 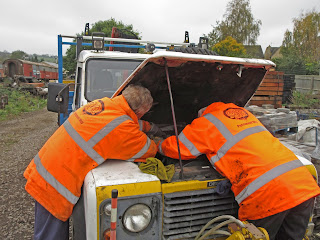 While waiting for the Telehandler a further investigation was made into the belly of the Landie. While the brakes now worked fine, something else had come adrift. Our two expert mechanics got their hands dirty, but without success. A bit of a mystery here. 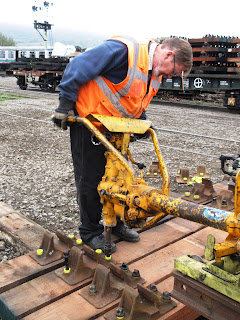 On team one Dave was on the Stumec all afternoon. In this picture the alternative M.O. can be seen. Four sleepers are placed under the end of the 'running rail' and three of these can be reached by the machine. The fourth had to be done by the 'Animal' as it was just out of reach. Actually, half of the third sleeper was also a bit out of reach, as everytime Dave tried to do up the chair screws there, the Stumec fell off the end of its track.
We're now half way through the chairing up programme. Will we find the best way to do it before we do them all?

At least we are happy to report that this way the Stumec never derailed as such. Just fell of the end, that's all. 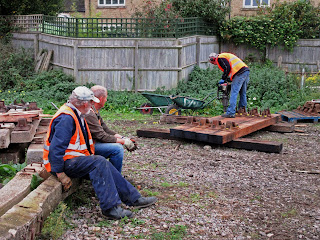 By the end of the afternoon we started to really get into the swing of things, as you can see on this picture. No, wait, maybe that's not a good one to illustrate it. To be fair, they're sitting still because they can't place any more of those heavy chairs until the next four have been taken away. 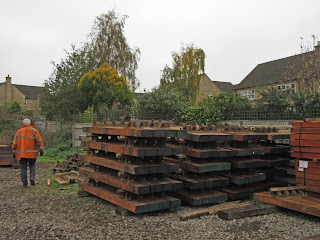 The tally at the end of this mizzley day was 92 sleepers! Wow, where did they all come from, after starting with only 6? We felt really good about 92, as the target was 100 and we had to unload two lorries at once all morning. Well done, team Winchcombe. That makes a total of 292 sleepers fitted out all told so far, out of a total of 600 (or more, depending on which ones you count) 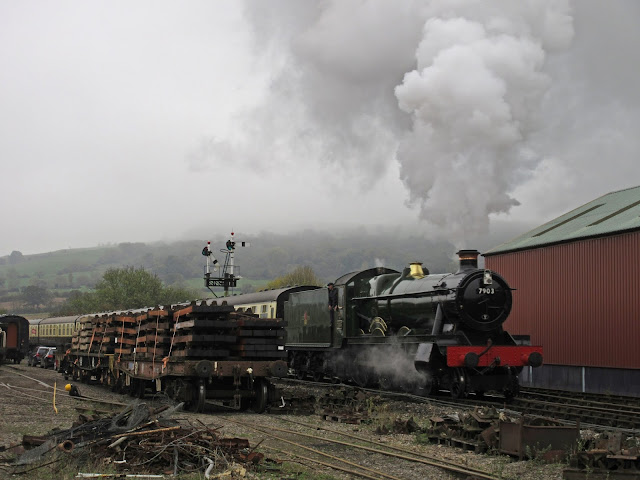 As Foremarke Hall heaves its 7 coach train from a stop at the inner home, you can see the 2 Warflats that were loaded up yesterday with both wooden and concrete sleepers, ready to give the Saturday gang at Broadway something to play with. They should get to well within the platforms with this lot of goodies. 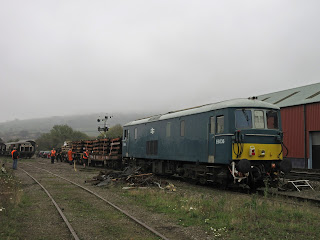 At the end of the afternoon the class 73 rumbled in to pick up the extension train. There's a lot going on at the moment, it's all go for the extension! 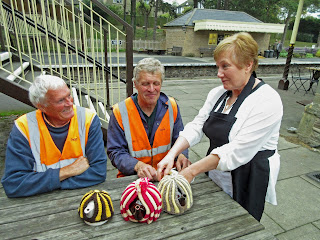 It's all go for a final cup of tea as well. With the tools locked up again, six of us sat beside the Coffepot and wound down after a busy but enjoyable day. Tina came out with three well wrapped up pots of tea for us. Wonderful. Out of the picture some daring types were even consuming coffee and walnut cake! Whatever next?

A few people have emailed us to say that reading this blog encouraged them to make a financial contribution, or to come and join us. What a great idea. If you too want to play a part in our great enterprise, then you are most welcome. It keeps us fit, we are going somewhere and helping to achieve it, and it's a social thing too - you get to meet some wonderful people.

You can join us here:
https://www.gwrt.org.uk/Become_a_Member_or_Renew.html

Finally, in a dark an increasingly wintery evening, the class 73 set off with the extension train for Broadway: 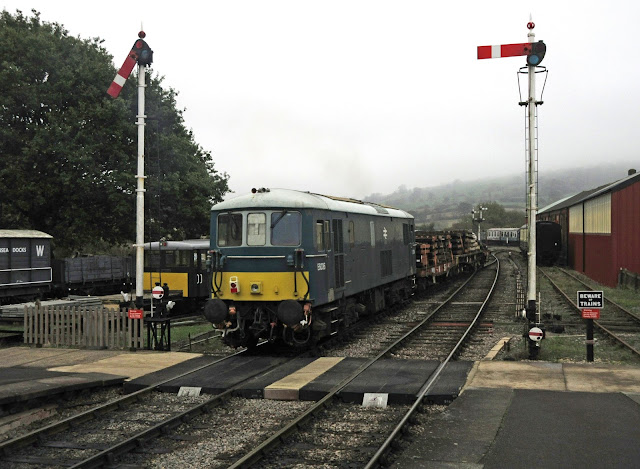 If you're neither, but a bit interested- we'd love to hear from you!
Posted by Jo at 19:12