Getting our ducks in line

Quite a lot is happening mid-week these days, all work that is not immediately obvious. 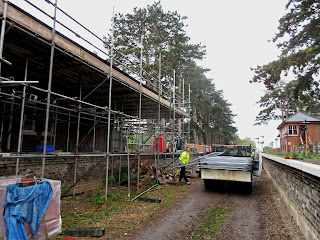 We kicked off on Monday by removing the Heras fencing along the trackbed (at last) for use a bit further along on the embankment.

That part of the scaffolding that stands on the trackbed was due to be removed on Thursday (read further on). 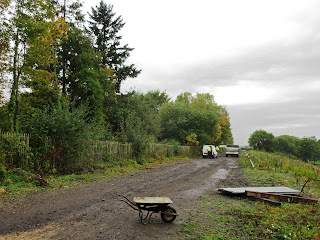 This is where we took the Heras fencing. Dividing the GWSR and Caravan Club properties is a rough and ready stock fence, which needs putting in its definite (slightly different) location. This was provided for in the sale agreement drawn up at the time of Chicken Curve when we sold the goods shed, but not yet acted upon as a lot of fine detail had to be worked out behind the scenes.
We now have the green light to move the fence to its definite position. 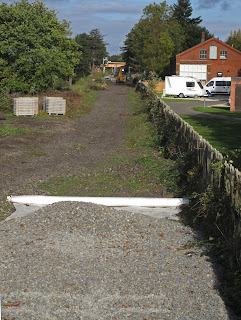 Looking at it from the southern end, you can see that the trackbed as ought to be is too close to the fence. This is because the fence was roughly built in a straight line, whereas the railway line describes a long curve here, all the way from Pry Lane and through the station to the northern side.

The fence will be now moved back for a maximum of 3-4ft at its 'apogee' as it were, lessening towards the opposite ends.

Trees standing too close to the future railway line will also be removed and/or pruned back. These trees self seeded after closure. 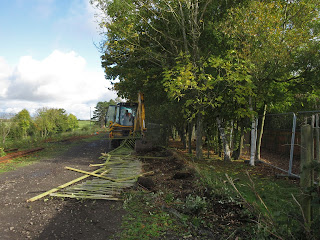 Here you can see the Heras fencing erected to protect the Caravan Club customers, while Steve removes the old fence at the front. The new fence line here will be somewhere in the middle - it's not a very big adjustment, but vital for the track to respect its curve into Broadway. 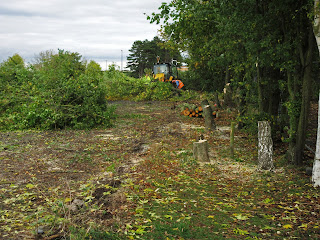 After a day's work, about a 50m stretch (of say 150m) had been cleared. The old fence line can be made out on the left, while the new fence line will be approximately where the smaller stump is in the middle. This still needs to be taken out. The taller stump will stay, left higher so that it will not become a trip hazard for the dog walkers that use this area. 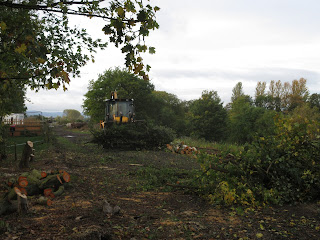 The logs were put to one side and will go to various volunteers who were quick to offer their removal services.
In the centre Steve is removing the brash with the JCB. 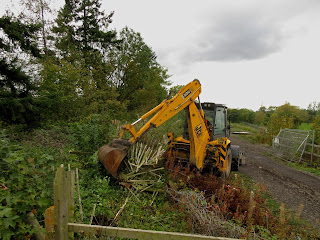 At the bridge end of the site the land still belongs to the railway, but needs sorting out as double track will come through here. The photograph was taken from the position of the down line, so we're not quite ready here yet to lay track! 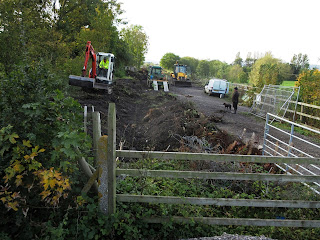 A day later, and much of the down line here is cleared, with debris being worked into an orderly pile on the left. It contained demolition rubble - brindles, blue plinth headers, concrete pads - which would have come from either the SB demolition, the station demolition in 1963, or the repair to the bridge pilasters, one of which was knocked over at an early date. 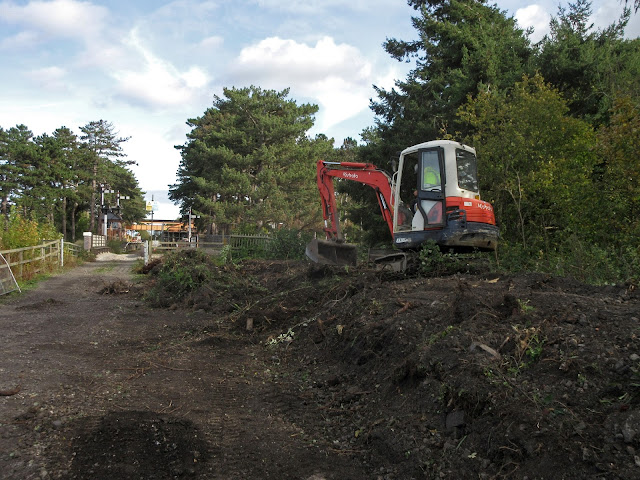 This morning the contractor was in a mini digger, busy landscaping the area on the right containing the rubble. It will have a flat top, which will make it easier to mow/maintain in the future. A pile of tree stumps awaits removal in the centre.
The trackbed in this area is lower than it should be, and will be built up with spent ballast. Next to raising the trackbed to its proper level it will also make the landscaped area on the right appear less high than in the picture.
The southern turnout will be located here, just south of the road bridge. 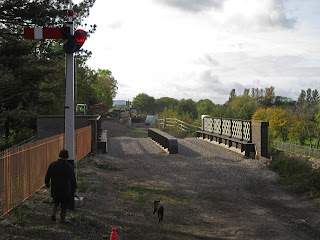 This is the view south from the platform.

The pile of spent ballast on the left is temporary and is destined to raise the bottom of the trackbed level back to where it should be.

The original signal box used to stand behind the blue brick wall on the left. It was completely made of wood, given that this is made up ground. 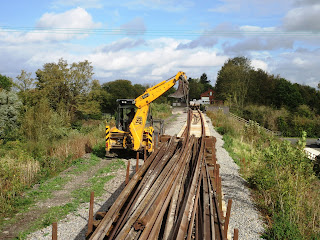 On Thursday the bullhead rail sorted out from Stanton was unloaded from the bogie flats. There are 14 pairs of it. The ends will be cut off, and redrilled, to avoid inheriting dipped joints. An extra pair of rails is included to make up for the offcuts.

Towards the end of the afternoon it was all off. Once the trackbed through the station is ballasted it can be dragged up to its final location. It's all coming together. 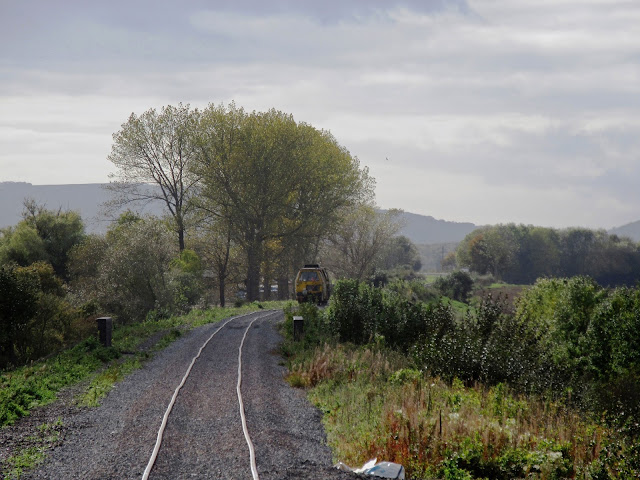 South of the extension train, the hired in B&R tamper was very slowly moving up the final 1000m of CWR, starting from the current limit of operations in the far distance. This is in preparation for stressing this last piece of CWR, which ends near Pry Lane bridge just visible here. The track here has had a first pass of ballast, and the tamper will sort out the levels and the slight wobbles you can see. 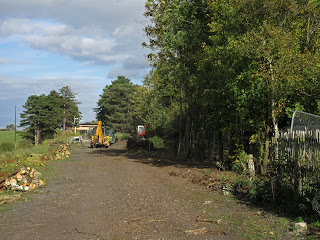 By the goods shed the first stretch for the new fence was almost ready. The tree stumps have been removed, while the mini diger is finishing off the landscaping of the long pile of demolition rubble.

Once this area has its new fence, we will move along to the next bit, behind the camera. 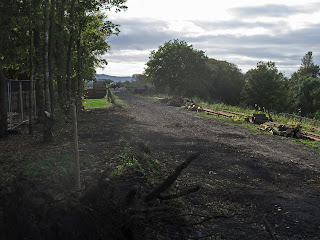 Last shot of the day along here - the view back south.
The post in the foreground locates the definite fence line, a couple of feet further back now. 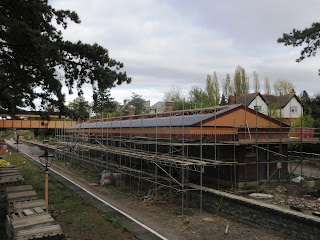 Back at Broadway station itself, the scaffolders had indeed arrived and were busy removing the nearest section of the scaffolding.
In this view they have already removed the planks, which starts to open up the view towards the canopy. A strip remains near the top where the glazing will go. 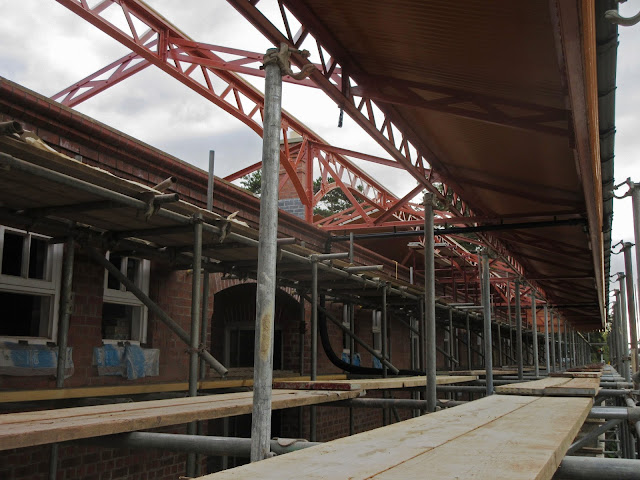 A peep under the canopy, with the scaffolding partly removed. You can now begin to see the loftiness of the rivetted canopy construction.
To the right of the ridge purlin is the strip where the glazing will go, and to the left of it is the last area which still has to be sheeted over with the corrugated iron sheets. Soon the building will be dry. 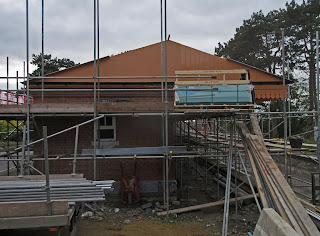 The northern end shows parts of the scaffolding already removed and stacked.
A raised walkway around the building will be retained until all the overhead work is complete. For the moment, only that part which stood on the trackbed, and part of the platform, is being removed.
Tomorrow it will look very different, as the removal work is expected to be completed around lunch time.
The new glazing has been delivered in two packs, one of which can be seen here. It will be fitted between Friday and Sunday. 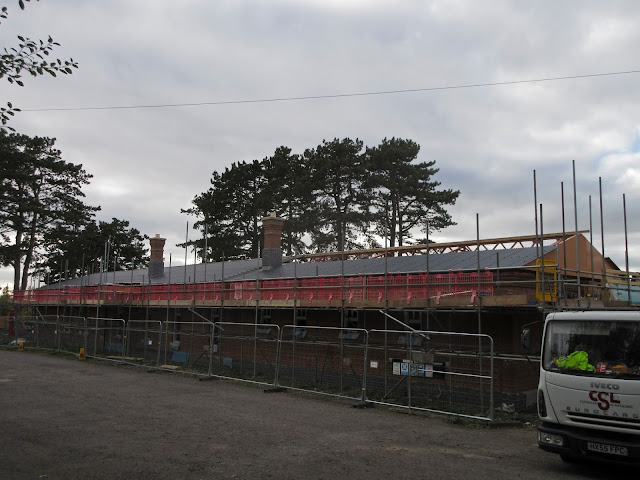 A last look at the station building from across the forecourt. The short bit of sheeting that still remains to be fitted extends from the RH chimney to the end on the right. Maybe a day's work, that's all.
Normally the northern canopy overhang would continue on the right. There would have been a 7m long circulation area at the bottom of the footbridge steps. We're having a think at the moment how to integrate the footbridge where it was actually placed, with what there was.
Posted by Jo at 19:35