Today our small gang of 3 carried on at Broadway. Two of us removing spent ballast, and one, Stevie, busying himself about the place grading and bringing in sleepers for tomorrow. 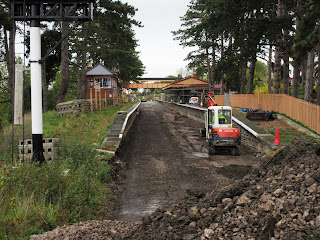 At the start of the day - a much drier one, thankfully - we had the last stretch of spent ballast to remove on the Cotswolds side, between the last two of the 9 catch pit lids. In the far distance you can see Steve with a worried expression - is the ballast level at the north end right for tomorrow's laying session? He was up and down with the JCB, pushing and grading the ballast this way and that. 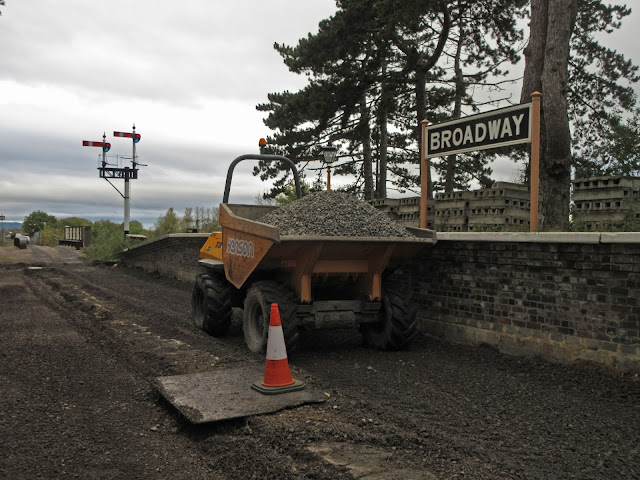 After an hour the Cotswolds side was cleared as well - high five! All the spent ballast between the platforms has now been removed. We immediately started bringing in fresh, knowing that several more lorry loads were expected in a car park area that was now very full indeed, as most of the spent ballast was dumped there as well.
Notice the tiny gap available between the dumper's bucket and the platform edge, with a similar gap available between the front wheel and the edge of the deep catch pit. So far, so good. 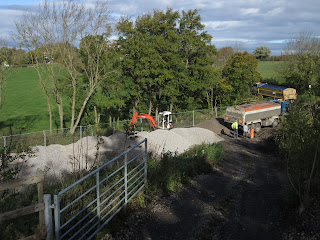 And then they came ! The poor little minidigger here is completely surrounded by ballast, as a second lorry load arrives, and just as we were dealing with it, a third. 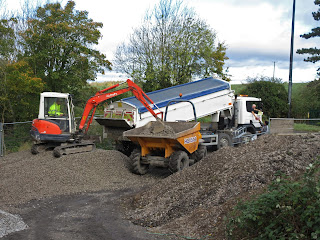 Adam had only just climbed on to one of the new piles and started filling the dumper, when the next load tried to squeeze in.

In the foreground on the right you can see a large pile of the spent ballast we took down here. More is parked on top by the new fence, ready to fill in a void detected in the old trackbed. 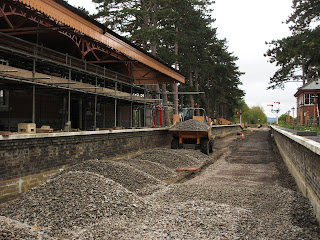 Then, with only a tiny parking space left for the dumper to load in the 'car park' we resumed the shuttle trips. We decided to concentrate on the Cotswolds side, leaving the Malvern side flat so that vehicles (JCB, Landie etc) could pass on Saturday. 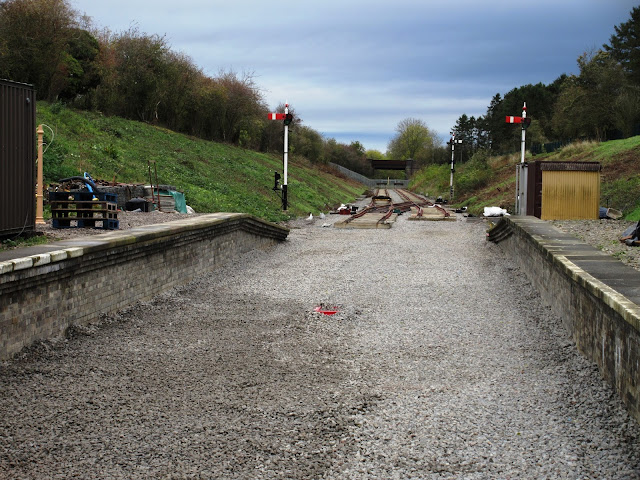 After quite a long time carefully grading, here is the first area that is completely ready for laying sleepers between the platforms. It's tricky working out the heights, as different sleepers are thicker or thinner, you have to know what is going to be used where. 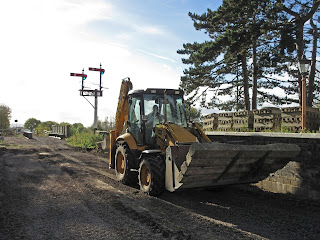 Next to the grading excercise, Steve also shuttled up and down with supplies of concrete sleepers. This is not only to empty the extension supply train, but also to position for tomorrow's laying, when there will be no Telehandler on site. The Telehandler will be used at Winchcombe to chair up more sleepers with a split gang. 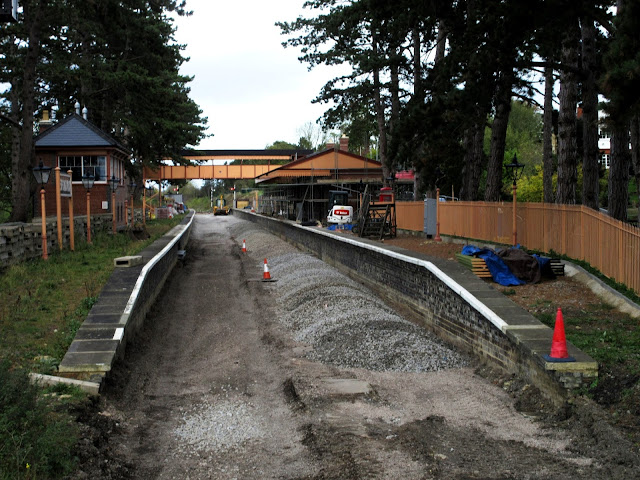 At the end of the day, another milestone: all the initial ballast is in on the Cotswolds side. Well OK, maybe two more drops, but we were tired. 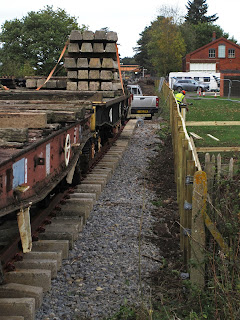 At the end of the day we wandered over to see how the fence contractor was doing. Answer: he has almost finished, just putting on the last few rails. What a good job he has done, and such good company he was too.

We're standing by the Childswickham bridge here, and looking along the top of the fence you can now see that it has a gradual curve to the left, just as it should. This now means that the track can continue along it at the same distance as in the foreground. Besides a bit of trackbed tidying up along it, we're ready to continue, but first the platform roads.

Monday will see us ballasting a second time on the last 1000m of CWR, to fill the low spots revealed by the tamper.
Posted by Jo at 17:38