A productive day today, with two gangs on the loose.

A briefing session was well attended. There seem to be more of us these mornings, can there be something attractive in the mess van these days? 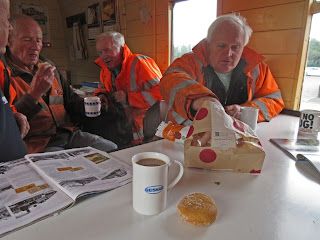 Tea, doughnuts, a railway maggie to read, and good company is the winning formula! 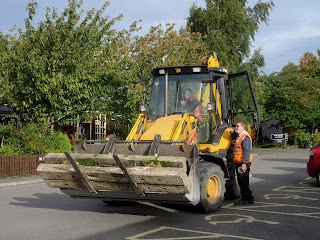 A few moments later there was a toot outside, and it was Stevie, arrived from Stanton where he had dug a few extra BH sleepers out of the undergrowth.

These will be needed for completing road 6 behind the loco shed.

A second gang set off in the Landie for Skew Bridge to do regular maintenance on the line leading up to the tunnel mouth at Greet.


A large number of minor defects was successfully addressed, but on the way back the trusty Landie went into a sulk and wouldn't go into reverse any more. Its occupants, expecting a comfortable ride home, had to bale out and push! Such an indignity. It was eventually coaxed into the opposite facing position, and a ride home in forward gear was achieved. Phew! We suspect a low clutch oil level, and a leaking master cyclinder. 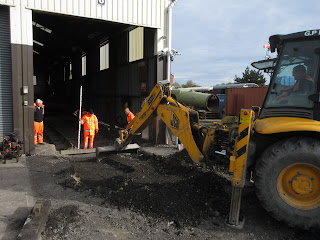 Behind the shed Stevie put the sleepers to one side and started to dig out the trackbed for the connection into No. 6 road.

Jonathan is holding the level for an occasional spot check to get the correct depth. 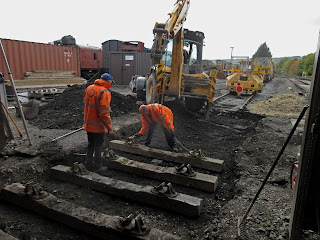 Shortly afterwards all was well, no more high spots detected. In fact we found two more concrete sleepers burried in the debris, so that was a 'gimme' and we used them straight away, after cleaning them of hardened on clay and rust. 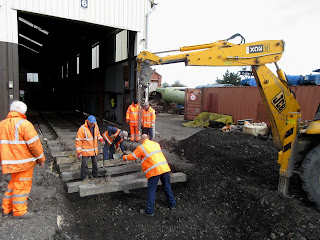 Then came the sleepers fetched from Stanton, and finally a few more from around the yard, until they were all in. 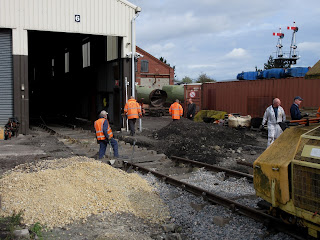 There - all the sleepers are back in. Both the inside and the outside of the shed are to be concreted for a nice smooth floor, after years of working in the dirt. This was made possible by a kind member who left us a legacy, an act which is very much appreciated indeed by the GWR Trust.
You can see how we put the money to good use, and the tax man gets less too. A win all round. 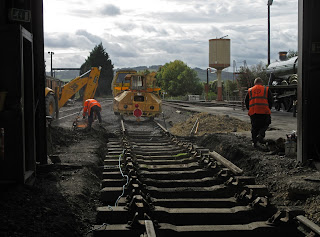 Here's a view from the inside, with all the sleepers laid out, and now in a nice straight line. We've fetched up a length of BH rail, and Martin on the left is cutting it to the correct length to fill the gap. 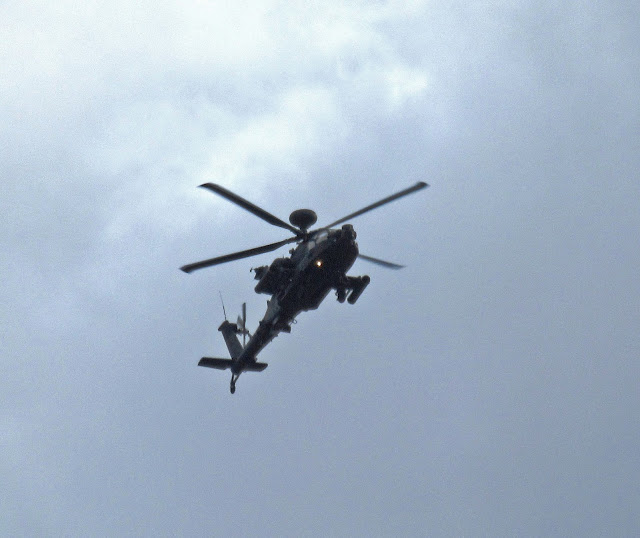 We then had an overhead visitor (two in fact, one behind the other) which is believed to be an Apache, although readers will no doubt correct that. It seemed to be armed to the teeth and was very impressive. 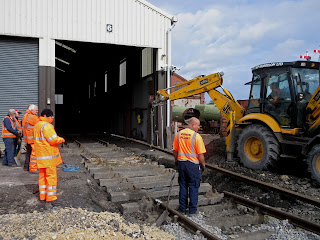 The length of rail was cut to size and cleaned, having lain in the mud for a long time.

Here Steve is lifting it into the shed, made possible with a bit of juggling and fiddling with the attachment point. We finally got it all the way in, and rolled it into the chairs. The hammering in of the first Mills key is always a satisfying moment. That's not going to move any more.

Time for lunch. Paul went 'foreign' today (anathema to the Saturday gang, who want their chips) and we got spaghetti with a carefully calculated number of meatballs on each plate. 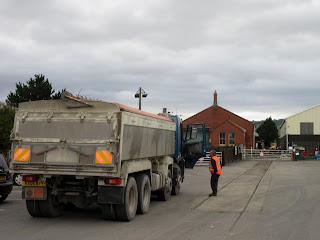 Another toot outside, and it's Breedons with twenty tons of ballast for us. 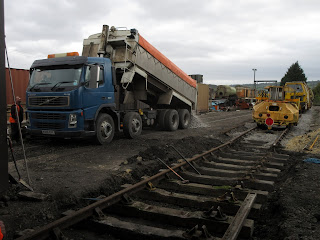 This was tipped next to our bit of track, ready for Steve to shovel it in. 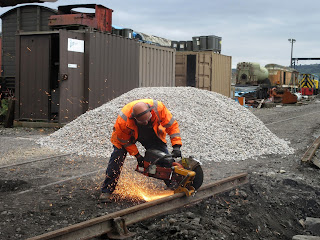 First Martin went to cut the second rail to length. We all stand well back to watch the display of sparks. 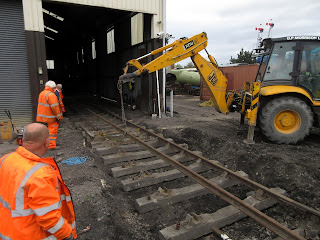 A moment of slight suspense as the second rail is lifted in. 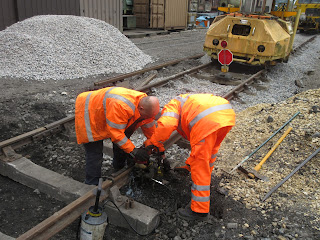 The rail having been cut to length, it needed a new set of holes to get the fishplates on. 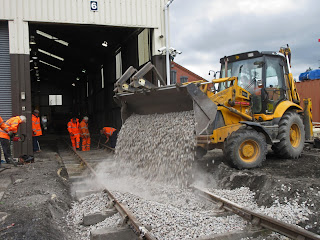 Then things got slightly more interesting, as Steve set about moving the 20 tons of ballast into the new length of track.

The men from the loco dept. told us they wanted it all in the same day. Give us a hand then ! 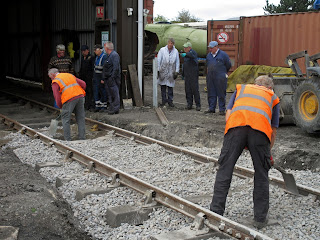 They were shy people, and preferred to watch us respectfully from a safe distance, while Paul and Dave sweated in the foreground. 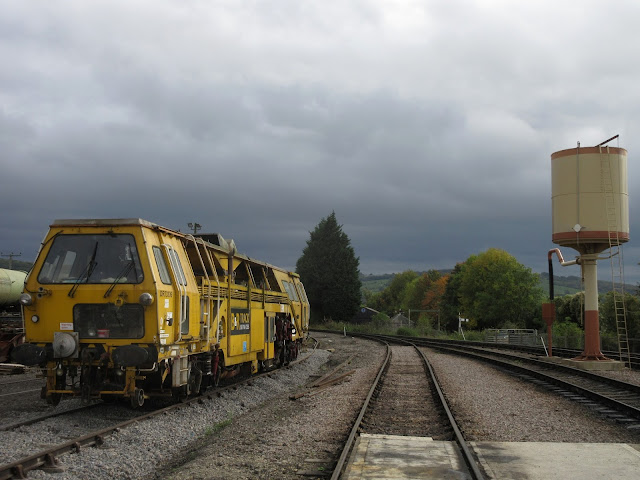 Then it was time to level and pack the new bit of track. It has to be just right for the concrete pad to go over it. The B&R tamper has come back, it was even parked on the right section of track, can we use that then? 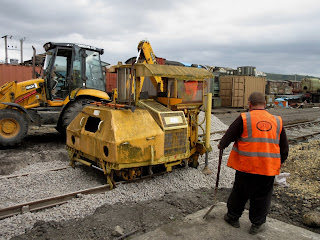 Sorry, you can have the little Jacker Packer.

Jolly useful it was too, although it gives a slightly comic impression as it scuttles about, lifting itself up.

Did a good job though. The road was lifted, and a dip taken out. It needs a heavy loco being pushed over it, then we will finish the job next week. 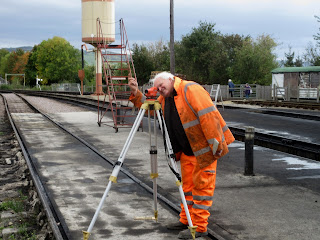 We had Peter on the theodolite to make sure everything was level. He got it down to a few mill (or eights of an inch, just to add fuel to that debate.) Whatever, we were pleased with the result. 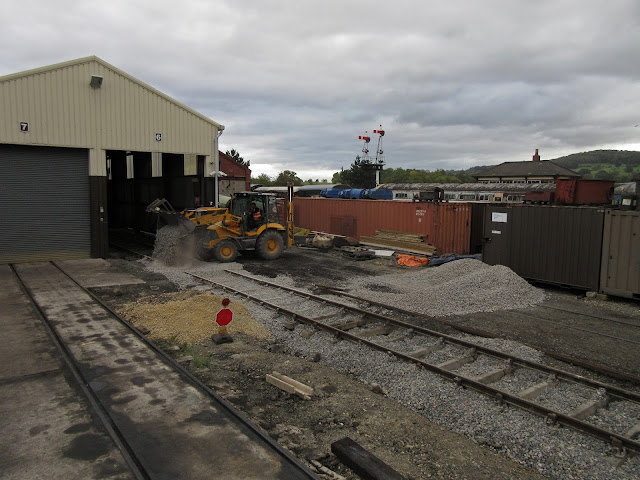 At the close of the day, with the volunteers already gone to return the tools to the van, Steve was shovelling in the last loads of ballast. Job almost done.

Fettling roads 10 and 11 (on the far left)
The tamper back in action on the last stretch of CWR
We dig out the rest of the trackbed at Broadway
200 Hardwood sleepers arrive for laying there !