After a short spell of ballast dumping at Broadway this morning, activity shifted to the third and last 1000m of CWR on the extension, which now needs ballasting further after the first pass of the tamper. This lifted the track nice and level, and so doing exposed several spots of still insufficient ballast, or lack of shoulders. 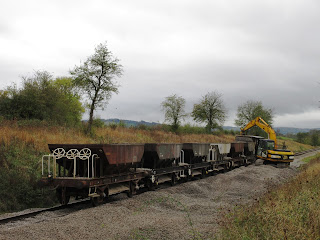 Mid morning found Adam at Stanton loading up the train of 6 Dogfish. Four volunteers were found at short notice to accompany the train and deal with the drop.
Another volunteer was on duty at Toddington to receive a consignment of new bullhead rail, destined for the through road at Broadway. We've now got everything we need. 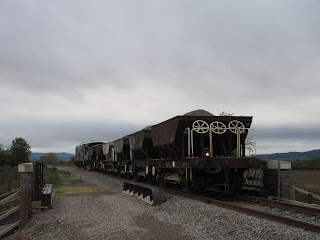 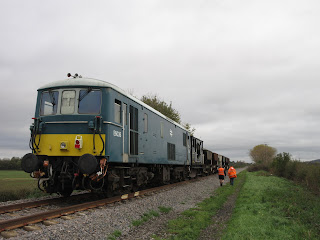 We parked up just beyond the LOO and then walked the length to discuss what would be dropped where.
In the foreground is the northern end of the second 1000m stretch of CWR. The next stretch will take us to Pry lane bridge. 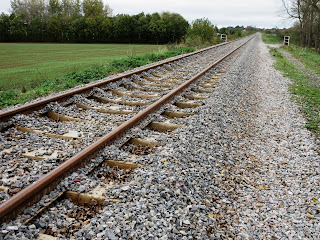 This is an example of where we need some drops. After tamping the sleepers have risen out of the ballast. 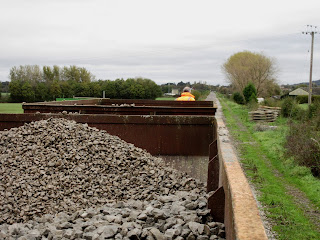 We dropped each Dogfish in turn, heading towards Broadway. Twenty tons just sink away into nothing in a few seconds, cascading in to the 'four foot', from where it is 'sharked' out into the cess. 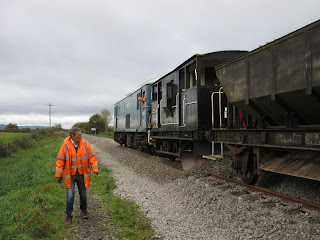 Here Neil propels the class 73 slowly forwards.
The Shark plough is dropped and, as visible by the darker colour of the ballast behind, overturns what is in the 4 foot into the cess outside.
In that way the four foot is filled to the level desired, and the excess goes on to the shoulders to support the track laterally, which is important if you have CWR to prevent buckling. 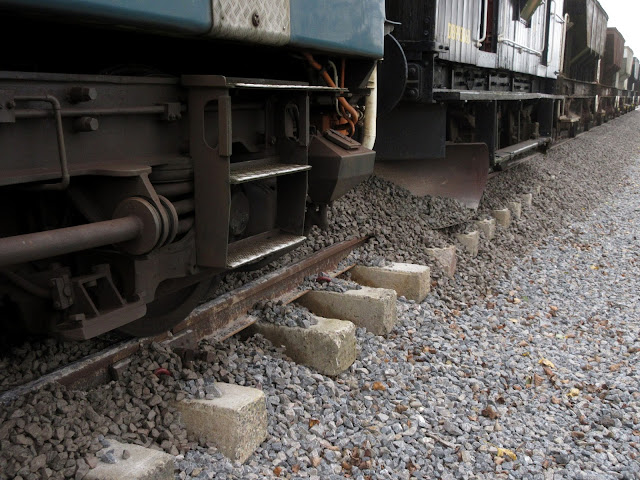 In the middle of the stretch of CWR-to-be is the location of the pulling point. In this picture it's a small gap in the rail, held together by two plates and a G clamp. The Class 73 bogie wheel is on top of it in this shot, with a bit of red Pandrol clip peeking out.
The Shark plough, squealing and crunching as it goes along, will catch on the screw of the G clamp so the train needs to be brought to a halt here, the plough raised, taken over the pulling point, and dropped back down again.
In the background you can see how the drop has successfully covered the sleeper ends, still exposed in the foreground. 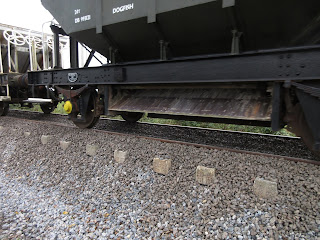 In this area, just north of Peasebrook Farm underbridge, the track is now quite high, after tamping. There is a good 2ft under the sleepers here, and a great deal more ballast is required on the shoulders.
Every Dogfish full costs us £500! It's budgetted for, but you still have to find the money. 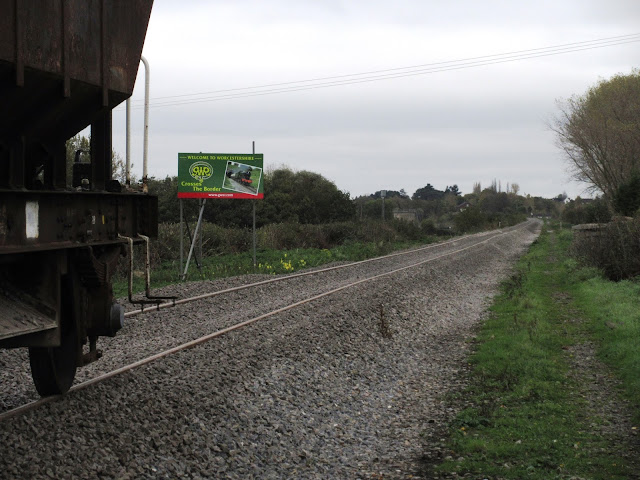 As the train slowly travels back south again, it reveals the success of the drops just made, two train loads today, with a refill in between. More is needed beyond the underbridge, as shown in the previous picture.
Once this extra ballsting is completed there may be another pass with the tamper, and then the ballast regulator will come to sweep the track clean, so that it can be stressed, and all the clips put back in.

There'll be another mammoth clipping up session soon, prepare your diaries, folks! Lets hope it rains less than last time.