On a soaking wet day today a gang of three continued with the removal of the spent ballast at Broadway. It was at times truly miserable, it was so wet. But that's what we have Goretex workwear for. Except for the neck. And the hands. How come the water still manages to creep in?

A few opening pictures for today: 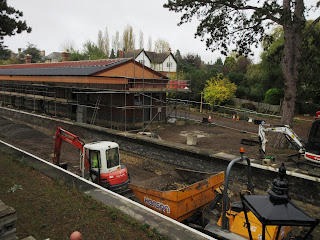 With Steve working the Childswickham end of the site, it was for the mini digger to try and punch through the hardened cake of spent ballast. It wasn't really up to the job, and eventually had to resort to a smaller bucket, armed with teeth. Just goes to show how hard and impermeable this stuff is.
This opening shot from the doorway of the SB shows that we had already passed the station building, at least on the Malvern side. 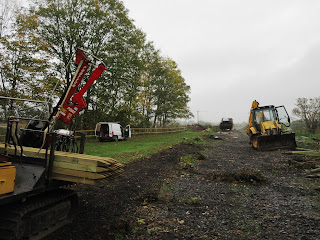 At the Childswickham end, Steve was helping the fencing contractor with the removal of the old fence, and then preparing the PWay unloading site for more materials, basically the sleepers loaded at Winchcombe yesterday.

The last stretch of old fence was taken down today. 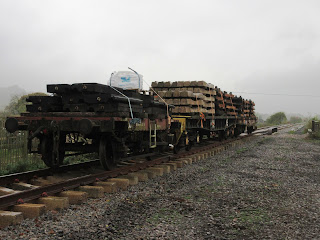 It needs unloading urgently, as it will be needed again for a further resupply. Hence Steve's preparation of the area. 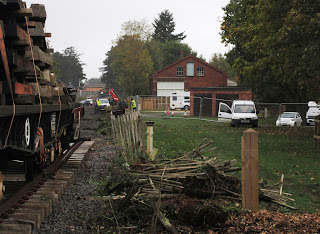 This is the start of the 'pinch point' where the track laid so far is hindered by the old fence. The new, permanent fence will be 3-4ft further back by the goods shed, a few inches at either end. That brings back the curve that was here. 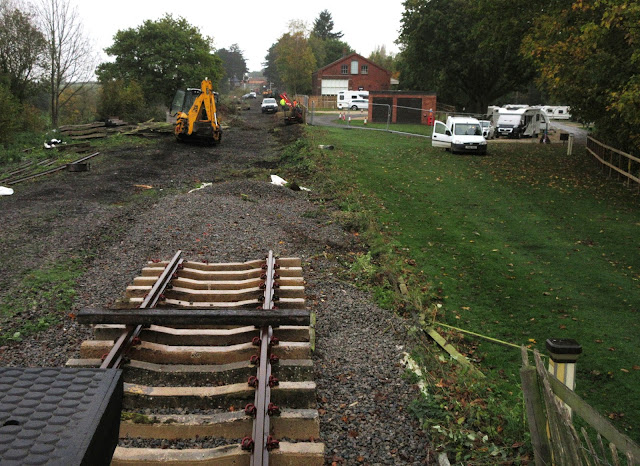 A more 'aerial' shot illustrates the pinch point better. The fencing contractor was a fast woker and in this shot was already well past the goods shed. The exact line of the permanent fence was set out with little yellow stakes on the ground by our PWay dept, so all the contractor had to do was follow them. Simples, and precisely measured. 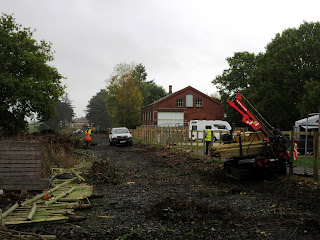 Here is the contractor assembling the 4 bar fence, already well past the goods shed. Not so far to go now. He's a local man, so over tea we shared some great stories. One way or another we all know each other, via via. 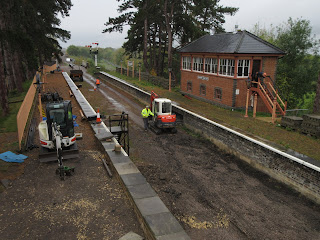 An opening shot of the ballast removal excercise here, seen from the opposite direction and higher up. The instruction was to proceed up the Malvern side, and if any time was left over, start on the Cotswolds side by the yellow gravel in the foreground.
Also in the foreground is the completed stretch of platform slabbing. Now it's one continuous curve all the way through. Next it's further infill to bring the ground up to the level of the building, not forgetting a supplementary lamp post in the bottom LH corner. 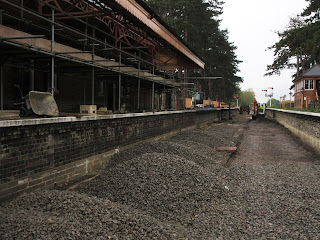 From ground level there are prodigeous piles of ballast now along the Cotswolds side, which Steve hasn't had the time yet to grade off. Too busy! 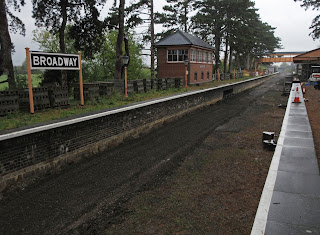 Regular digging all day took the Malvern side beyond the building, past the signal box, and past the running in board. One long clean stretch here now, ready for fresh ballast in a day or two. Speaking of the running in board, ours was put up 3 - 4 years ago now, one of the first heritage items on site. However, we had to use letters cut from plywood, which delaminates over time as you can see here.
With 4 more years of experience under our belt, we have since built up sufficient contacts to be able to source replica GWR cast metal letters. In future (when our busy carpenters have a moment) both our running in boards will be so equipped. 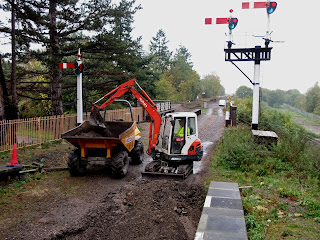 At lunch time we finally reached the end of the Malvern side. 200 yards of digging. Now for more of the same down the other side - luckily only about 50 yards of that remain to be done. Photographs were taken in between bursts of heavy rain, gloves wet and reluctant to come off, camera under 3 layers of wet clothing and not very happy in all the dirt. The blogger's camera needs to be replaced about once a year, at a cost of over £100. Part of the price of your hobby, we don't mind.

Now a look back over what we did: 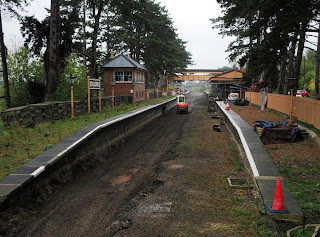 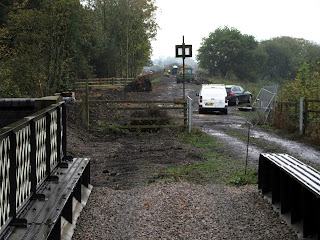 Here we are on the bridge. You can see the curve towards the right, through the gate, through the pile of willow stumps waiting to be removed, to the white blob in the distance, which is the Conflat on the end of the extension train. It'll be double track here up to where the white van is parked. 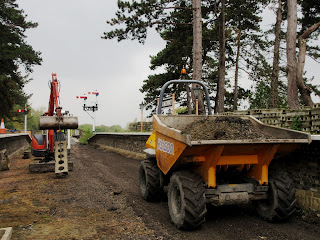 Now we want to go back the other way, on the Cotswolds side, but there is a lot of stuff still lying on the trackbed.

This one belongs to S&T, it's one of those concrete frames you bury in the ground and on which you can attach cranks and pulleys etc.
We parked it on the end of the platform from where they say they will collect it. High enough so that there is no lifting involved, aren't we kind. It's heavy. 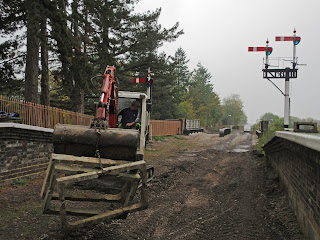 Next, a fine selection of broken concrete catchpit rings. They went down to the corner of the 'car park'.

Also removed were supplies of rebar, a street lamp post no longer required, some scrap on a pallet and of course the wooden steps that used to lead down to the trackbed. In future volunteers will need to use the barrow crossings that will be installed at each end. One is already on the extension train. 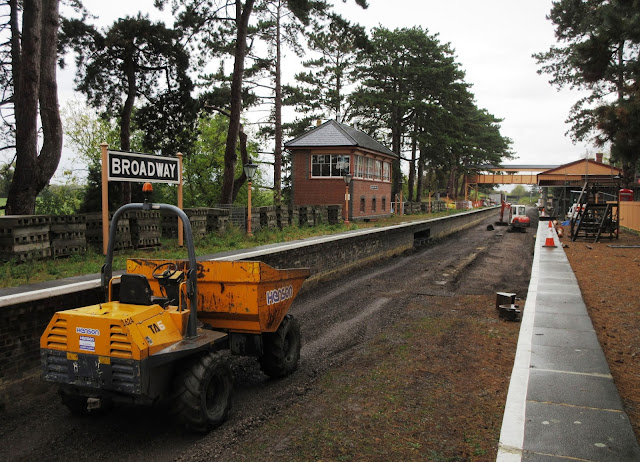 At four o'clock a final rain shower made it go so dark that for a moment we thought it was (already) the end of the day. We were about to quit when it was gone as quickly as it came, and we did a bit more. We extended the Cotswolds side of excavation to within 1 catch pit from the end, i.e. about 30 yards still to go. That shouldn't take long, then it's fresh ballast every trip. Five more lorry loads have been ordered, and there's no room in the 'car park'. Better get going tomorrow then. 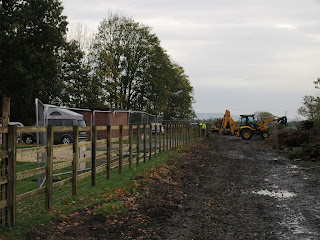 At the end of the day the fencing contractor was within sight of the end, as you can see here. Didn't he do well?

The trackbed needs a bit of soil removal here still, before we can ballast it. That grass has got to go. 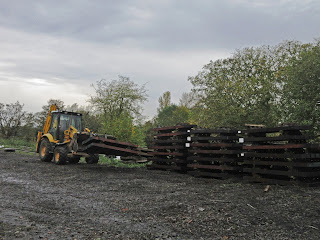 Steve meanwhile had started on emptying the train as the light began to fade.

Here are some of the wooden sleepers, now fitted with chairs. Concrete sleepers, in use outside the platforms, were also brought up. 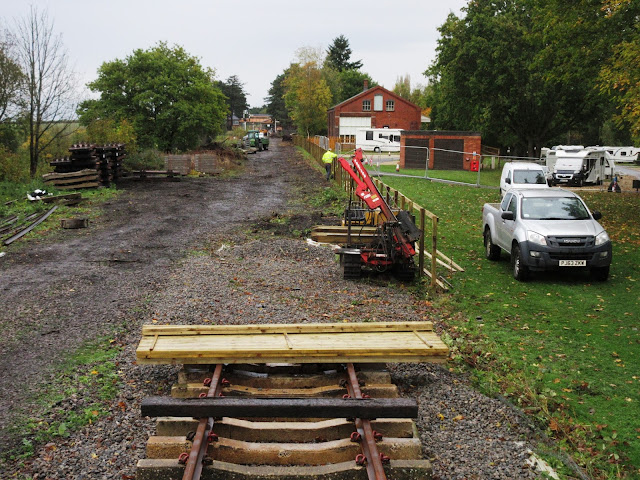 Here's the end of the day shot from the Conflat - compare with the same picture at the top of this post. The fencing is almost finished, and it looks so normal now. The track coming off the bridge behind the camera no longer seems intent on ramming it, and you can see a gentle curve into the station. 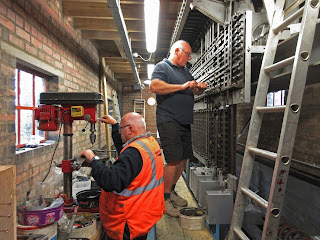 Just to show that we were not quite alone at Broadway today. Malcolm and George spent the whole day in the SB down in the locking room, on the slow and tedious job of fitting the locking.

Nice and dry in there.... we're in the wrong department... 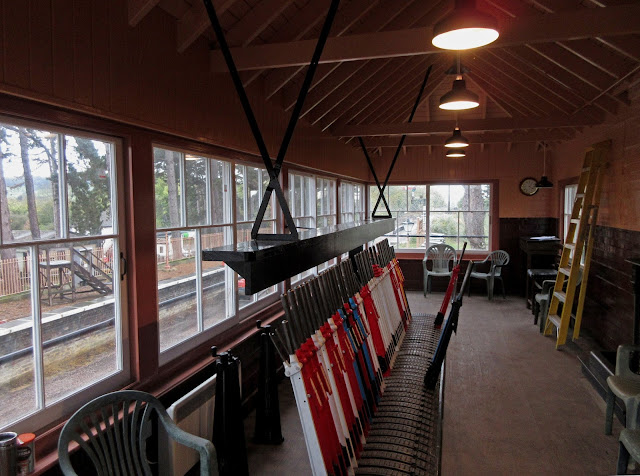 Upstairs the lights were on, and a chance for this atmospheric late in the day shot.