The ballasting gang was active again today, to remove spoilt ballast from between the Broadway platforms, and to replace it with fresh. 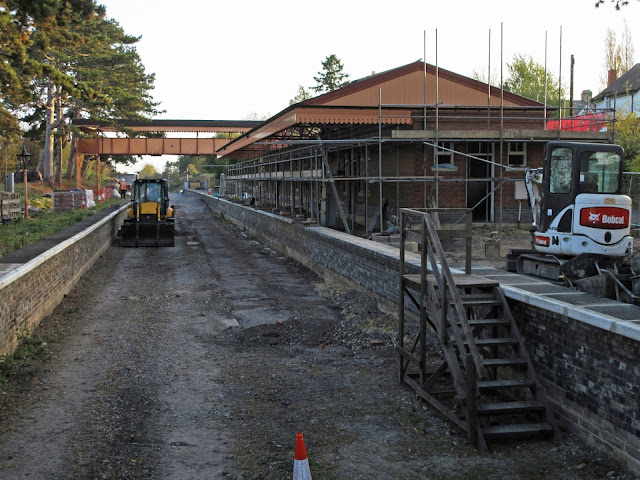 Our opening shot shows the situation first thing. The ballast removed on the right now extends to the southern end of the building, and today we did the same for the strip on the left. 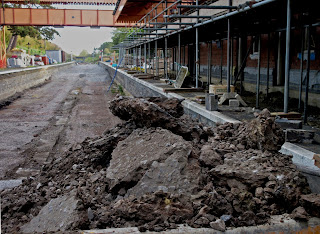 This is what comes out - great big cakes of gravel held together by years of impacted clay. They're going out of here! In fact this stuff is still useful in a way. In fact further along by the site of the original signal box we're building up a bund which will eventually support the new fence line. The dirty ballast extracted was mostly dropped here and used to make up the bund. Previously there was a hole on the left, which was where the foundations of the old wooden signal box once stood. 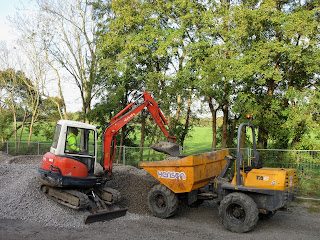 Once we'd removed the c**p from the strip on the left for another length between catch pits, Adam went down to the 'car park' and started to load the dumper with fresh ballast. 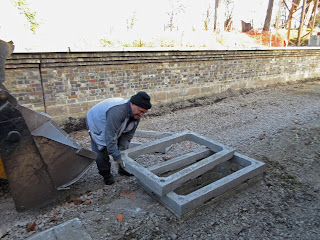 Before dropping the fresh ballast between the platforms, Steve went to get some more catch pit rings to raise their height above the new ground level. 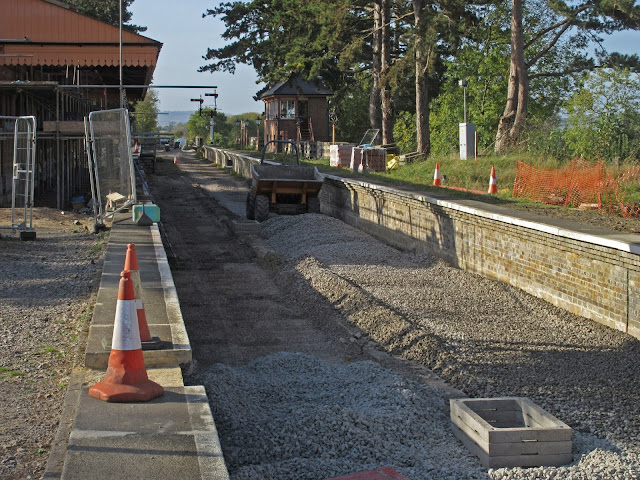 Mid morning we had dug out the strip on the Malvern side to the next catch pit, and filled it with fresh ballast.
The raised catch pit with extra rings is in the foreground. 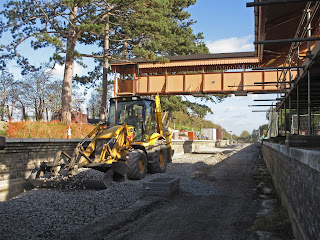 Steve then graded the first few piles. We're level with the station building now. Tipping ballast on the right was tricky due to several fragile plastic drainage pipes that crossed the trackbed at insufficient depth. 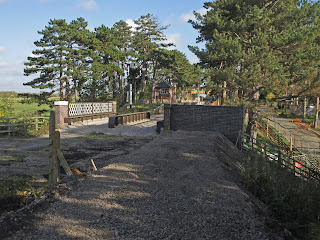 In the latter half of the morning the contractor that was erecting the new and permanent fence along the goods shed signalled that he needed the Heras fencing moved along a bit.
On the way is the new bund crossing the site of the old signal box, which used to stand up against the wall here. The double track formation is on the left. The bund is on the site of the (fourth) track that used to run right in front of the goods shed, prior to a turnout where the camera stood, and a head shunt by the box. 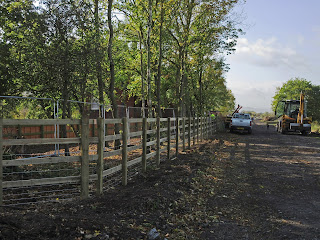 The fencing contractor has done well. This is the corner where the GWSR property line moves diagonally across towards the Cotswolds, giving us part of the fourth track that once ran up to the site of the old box. The old fence ran where the line of leaves can be seen. 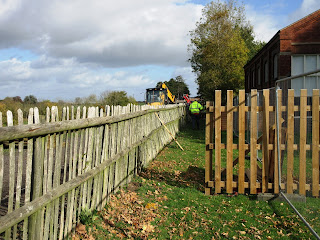 The next bit of old fenc to come down then is along here, just south of the goods shed.

The new fence will meet up with the fence coming in from the right; i.e. back about 3 feet.

The old fence was rotten at the bottom too (as well as in the wrong place) and you can make out a prop a bit further along. 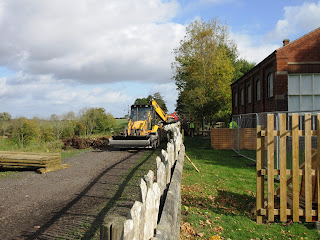 Here Steve has just started extracting a further length of the old fence. 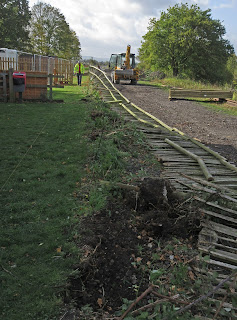 Steve has the old fence down in a moment. It must be 20 years old; it was put up years ago to stop trespass by quad bikes on the grounds of our then tenants of the goods shed.

Until 2013 there was no question of selling the goods shed, but then along came Chicken Curve and a desperate search for funds. Needs must. 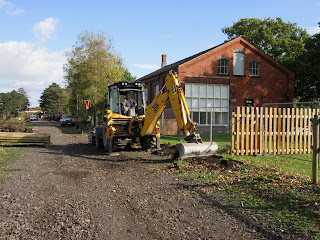 Once he'd removed the fence, Steve scraped off the vegetation and bits of Postcrete still left in the ground, ready for ballasting in a week or two. 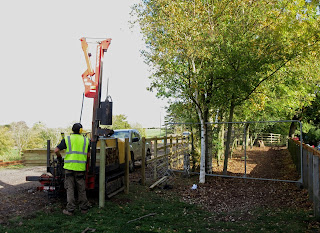 Behind us the contractor was piling the posts for the new fence, which will have 4 rails and wire mesh along the bottom.

What he has done so far looks very neat and tidy. 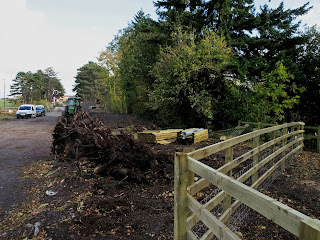 This shot at the corner where the fence cuts across the 4 track shows where the GWSR ownership of the trackbed starts, and eventually leads to the new bund by the SB.

Some enornmous tree stumps have been dug out (self seeded Willows) and still need removing. 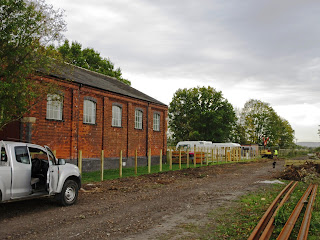 Late afternoon the fencing contractor had erected so many posts that he had almost reached the new end of the Heras fencing that we moved only that same morning. We'll have to move it again tomorrow, for the third and final time.


After doing our bit at the fence line, we resumed the ballasting operation, with a digger loading in the 'car park' and a second levelling between the platforms, and the dumper shuttling in between. That went on for several hours... 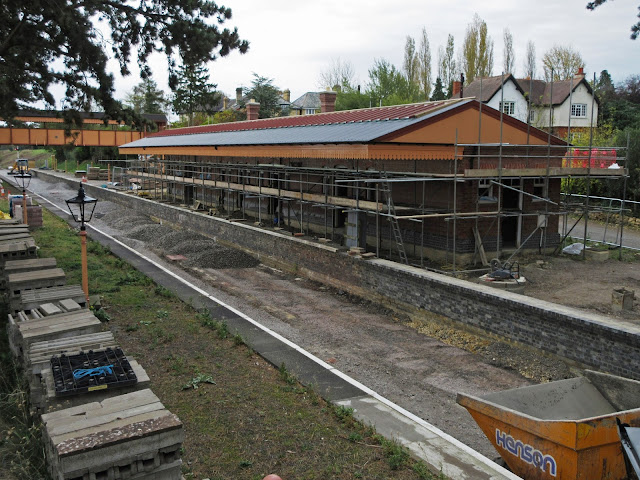 This end of the day shot shows how the rows of dumped ballast have almost reached the southern corner of the building. We did a bit more after this picture, but you get the idea. At the end of the day we had completed 5 of the 8 sections between catch pits, so we're over half way now. The scaffolding that was standing on the trackbed was removed only last Thursday, and today, Tuesday, we're already way into that area, and almost past it.

Notice that the glazing on the canopy is now also finished. Two panels cracked (one during transport, the other by the strong wind as it was handed up through the roof) but without consequence for us. They're laminated, and both have been replaced so the job is now finished except for the flashing, which was being continued by a sole BAG volunteer today. 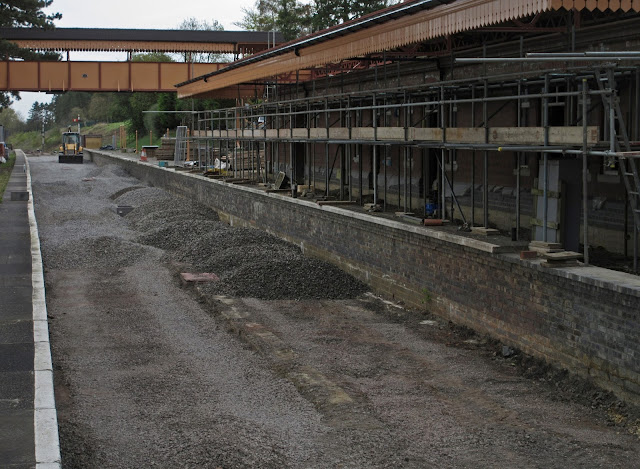 A last look at our work today, from further down. There are many piles of as yet ungraded new ballast on both sides. Steve has been concentrating on the northern end, to make quite sure that the final levels are right, and ready for the next bout of track laying. We now have the materials for this.

A bit of history

Garry Owen, former head of the PWay department in the heady days when the railway went pioneering south from Toddington, has allowed us a peep into his substantial collection of track laying photographs from the 1980s. In due course these will be posted on the 'early GWSR' Flickr site. They are now part of our history. We'll be looking at some more as well.

Because we're now at Broadway, you might be interested in the three photographs below, which Garry took in 1987 during a sponsored track walk along the line of the former railway. 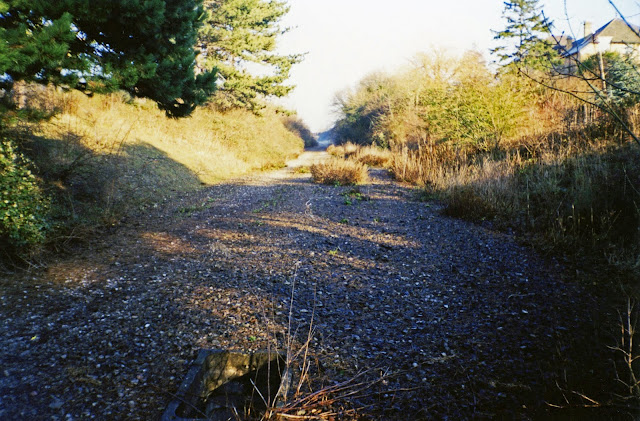 Broadway, looking north. There is nothing left - no station, no waiting room, no platforms, no track. The only recogniseable point of reference is the former stationmaster's house top right, before it was extended left (and we sold a strip of land for this purpose, keeping just enough for platform 1). The platform 2 waiting room was in the patch of sunlight on the left.

Right in the foreground is one of the catchpits also visible in the ballasting pictures above.... 30 years have passed, and now we are winding back the clock. 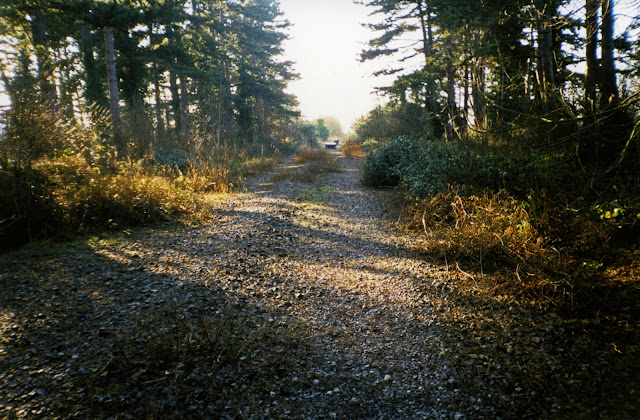 From the same spot, this is the view the other way, looking south. It's unrecogniseable. You can just make out station road bridge behind the square box in the distance. 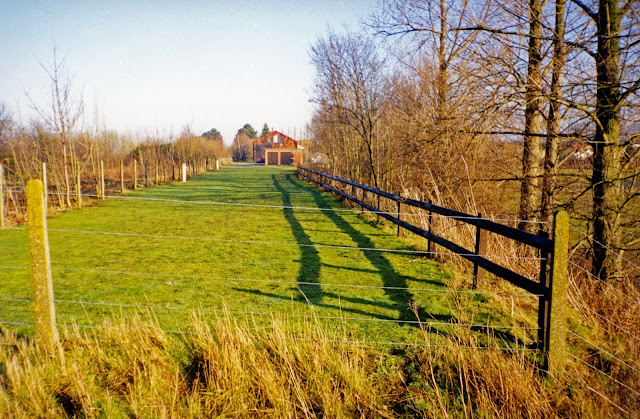 A shot of the goods shed, when it belonged to the GWSR but was leased to the Caravan Club. Additional caravan stands have now been created in the foreground. The overgrown nature of our trackbed far left, is quite striking. This is where we worked today. The concrete fence posts in the foreground are original and would have stood by the headshunt behind the camera, up against Childswickham Road bridge. A turnout on the right led to three tracks leading down to the goods yard and the gate by station road. It was from this point that the 10 goods wagons ran away down the hill in June 1936 (as described in the last edition of The Cornishman).