By the goods shed

Two of us on PWay work at Broadway today.

We started work early and did several trips with ballast into the platfoms. With the JCB absent this week, the mini digger was pressed into service to try and level out the piles a bit, to see where we are with the levels. 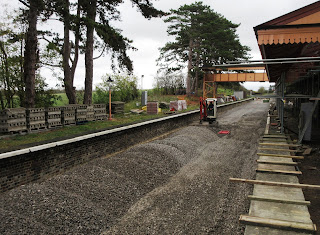 The news was not good, we need to put in more. We'll have to go back over some of what we did. It's mainly in the southern half, the northern half is about right and two sections between catch pits are already useable. 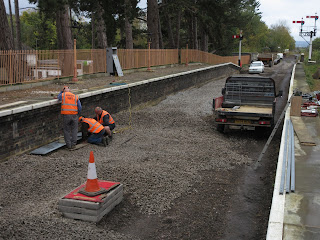 At 10 O'clock any further ballasting was curtailed by the arrival of the S&T group, who then occupied the trackbed. 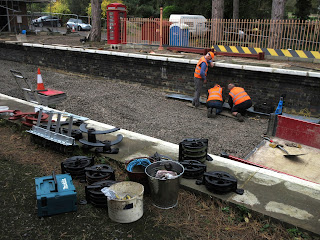 They are preparing the pulley wheels and cranks for the rodding runs etc that run down the opposite side to the box.

They arrived with some quite interesting bits of kit, laid out here on platform 2 in front of the box. They bolted a large base plate to the 'C' sections let into the concrete poured a couple of weeks ago on the opposite side. 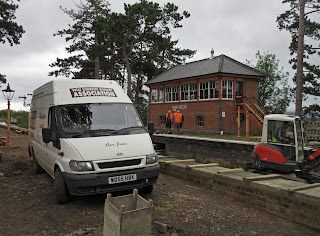 A pleasant distraction from the repetition of driving up and down the embankment with ballast from below was the arrival of a customer to collect a new replica GWR lamp post casting. Naturally we can't reveal the name of this venerable establishment.
There's quite a lot of interest in these replica GWR platform lamp post castings, like the one on the left. A GWSR supporter sponsored a pattern, and having satisfied Broadway's needs for lamp posts (22 in all!) we can now sell them to other railways. If interested, get in touch (breva2011 at hotmail.co.uk)

Another happy customer left with the goodies in the back of the van. With ballasting blocked, now what? 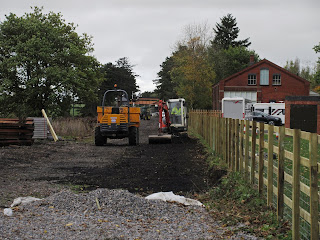 We found ourselves another job on the embankment by the goods shed. Now that the permanent fence has been erected, a shoulder of stumps, weeds and foundry waste remained, on which we do not want to lay track. Tomorrow this stretch will be surveyed to peg out the levels of the track here, so we decided to remove the unsuitable material and grade the rest nice and level. 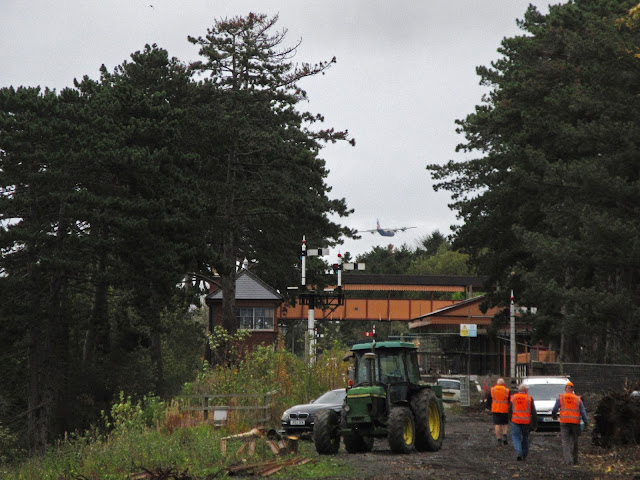 After a while, Adam suddenly pointed urgently to a spot behind the dumper. In a matter of  few seconds a huge C130 described a 'question mark' type curve around us, having flown up the trackbed from Toddington. It flew over the station at little more than treetop height, and vanished towards the Cotswolds edge. How exciting ! That's our boys up there, and one of them must be a supporter. 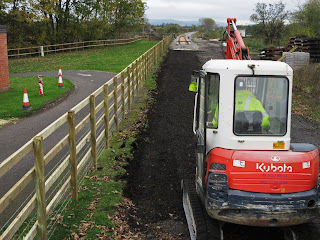 Here is Adam cleaning up the old shoulder, which was filled with odd bits of concrete, brambles and broken bricks with ash.

In the background is the railhead, paused to allow the new fence to be erected. Once we have the levels, we can carry on here towards the station. 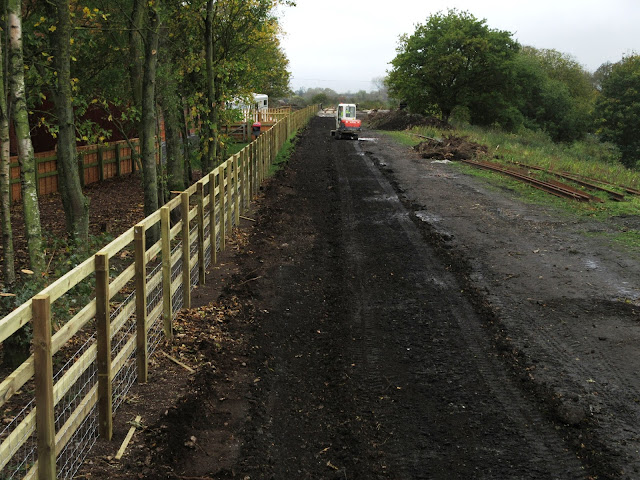 At the end of the day Adam was running the blade over what he had removed. It all looks very neat and clean now, and ready to accept track. Several Caravan Club customers came to speak to us over the fence, and all were very supportive and wanted to know when the first train was.

At Toddington yesterday we received the shipment of bullhead rail that had been specially ordered for the through line in the station. A member of the 2807 society took a couple of photographs and sent it to the blog - thanks, Stuart ! 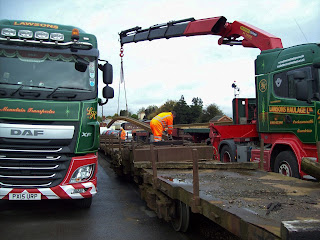 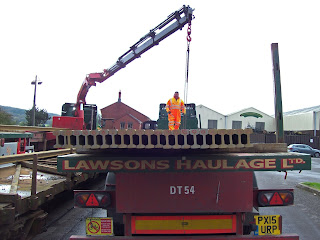 A shareholder asked us recently: What does Bullhead rail look like? Well, here you are, it's like a figure of eight in profile. You can still get it, but it's a special order and, as Nigel commented, slightly more expensive. Have any other preserved railways ordered it? We are buying it purely for the old fashioned look between the platforms.