Two days spent digging away at the bund on the embankment by the former signal box...
It's a slow job, but it's all got to go and the good news is that it reveals the site of a siding that might be of future use to us. 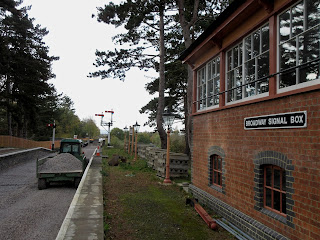 While two of us were digging away at the bund, Steve was working on his own in between the platforms, levelling the ballast to the correct height for laying, and taking away the excess to the space between the southern end and the bridge. 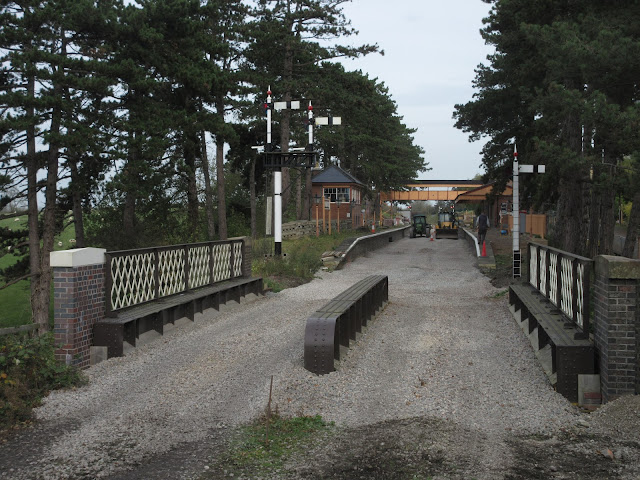 At the close of play yesterday he had (roughly) filled it all in, so that the ballast infill now stretches all the way up to the station road bridge. The area with the correct level so far is where the JCB is working in the distance. He's a bit over half way along there. 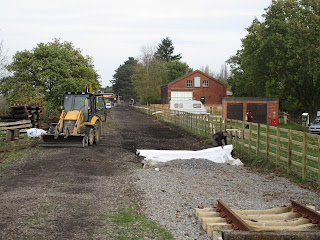 With that area filled in, Steve took an interest in the rail head at Childswickham.
Now that the fence has been relocated to the correct curve, we could, one supposes, recommence laying track here....

First a layer of Terram, and some ballast on it though. 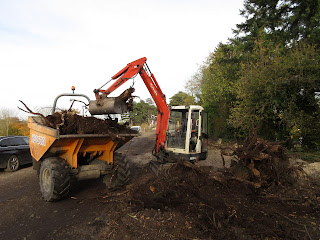 Meanwhile, we continued removing that bund. It's amazing what came out of it. It's principally ash, with red and blue imperials, concrete pads, stone, and the stumps of trees that self seeded here over the years.


Some of what we found was potentially useful: 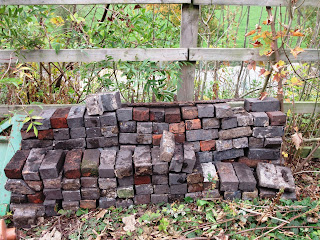 There were so many imperials in it, some of which were in near perfect condition, that we asked a couple of people in other departments if they weren't interested in collecting them. B&S were first with a positive reply. 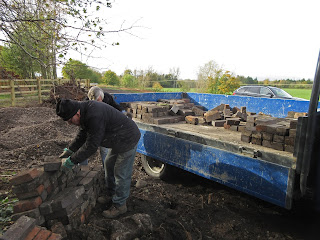 They came with the blue Transit, and were soon picking up the several hundred bricks put aside yesterday and throughout today. 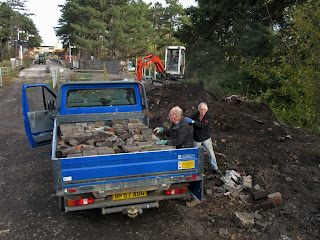 The little stacks and piles of imperials were scattered about the site, as the recoverer and stacker was also the dumper driver, and we didn't want to leave Adam in the digger with nothing to do.
The appeal for interest in the bricks was no false alarm, B&S left with a complete truck full, which means about a ton in weight. A single blue imperial can cost anything between 50p and £1 at a reclamation yard. 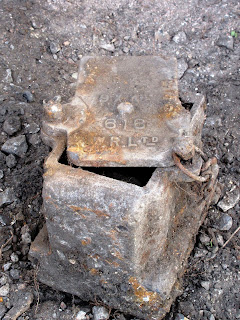 What else did we find in the demolition rubble?

Well, how about this: An axle box !

Extraordinary, what on earth was it doing there? 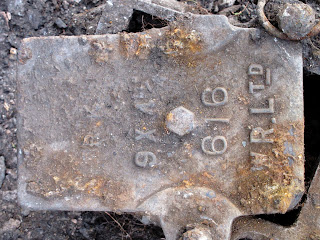 Here's a close up of the cover. Not very visible on the left (i.e. the top) are the letters 'RK' and at the bottom what we presume was the foundry: W.R. Ltd  . No evidence of a railway company, perhaps that points to a private owner wagon? Can anyone say any more about it?
Should it go for scrap, or does someone want it? 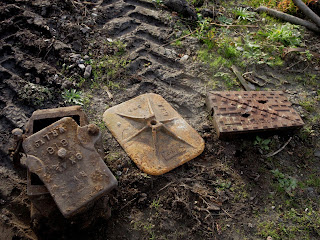 In the centre of this shot is a 'foot' of sorts with the inscription GWR on one end and GWR Signals Dept on the other. Who knows what it was for?
Does anyone want it (for a donation perhaps)? 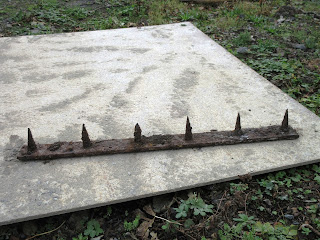 Finally, the 'piece de la resistance', this row of spikes, on a bar with 6 screw holes in it. Now we do know what that was... it was part of a row of spikes fixed to the top of GWR toilet cubicle dividers, to stop people 'saving a penny' by climbing over the cubicle wall and making use of the facilities for free. Almost cartainly from Broadway station, but how it got to the other side of the bridge (while tracks were still down during the station demolition) is a mystery. You can actually see one in place at SVR Kidderminster station, an authentic rebuild.

Given the large lumps of concrete in it, the most likely source of the demolition rubble is the former goods shed extension on the southern end of the goods shed. Some of the concrete plates had angle iron attached to it, which would point to the nissen hut type building that stood there until some point after track lifting took place. (see end of report for historical pictures) 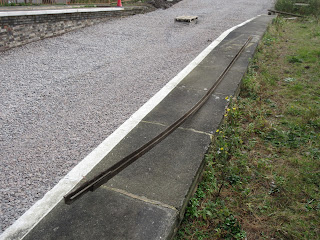 This is a channel rod for pointwork, 5m long. We left that for our S&T guys to discover, it may well be useful. 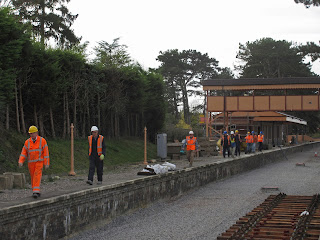 In the station area itself a migration took place at precisely 11 o'clock. Strange. What could the reason be? 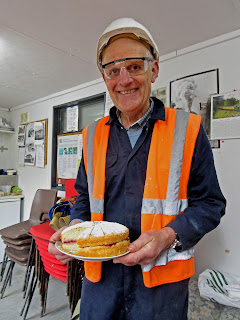 Well, of course it was elevenses and today there was a special treat from Keith.

It was his birthday.

In case of any doubt, this referred to the number of slices. The cake was home made, and particularly tasty. You could tell. 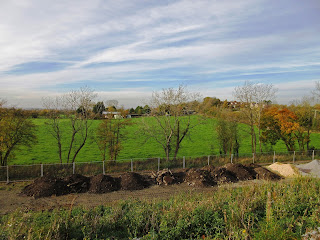 After lunch, more dumps. That bund, once dug up, was quite voluminous and here you see the result (of maybe half of it) down in the 'car park' where it has been parked. Concrete lumps carefully separated in the middle. 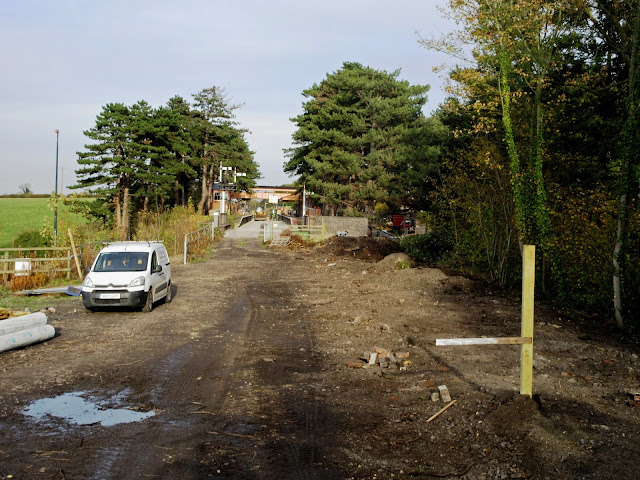 This is where it all came from. It was a one track wide strip on the right, exactly on the site of one of the sidings in front of the goods shed. It's going to be quite a useful area; we could perhaps even get a siding back in? 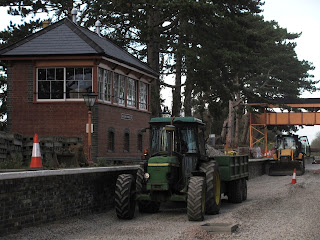 A freight train then appeared at platform 2, towing a single ballast wagon. It didn't exactly thunder through the way the 1960s iron ore trains used to do here, but picked its way carefully between platform walls and catch pit rings in the middle. 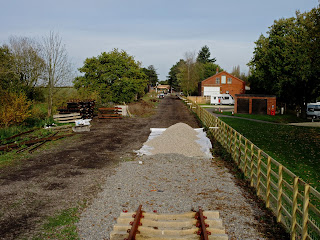 Having rolled out a length of Terram, Steve started to ballast the area beyond the rail head.

There is a plot afoot to start a second track laying front here next Wednesday, while the other gang heads south between the platforms on Saturdays.

This points to a golden spike somewhere near the southern turnout! 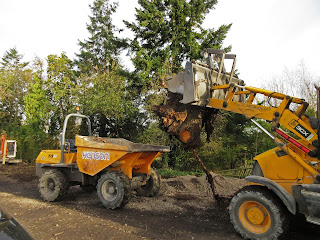 Near the end of the day - the bund is still not fully cleared, but with a bit of luck tomorrow - we did a bit of site tidying up.
Adam managed to get all the concrete slab bits into the dumper with the mini digger (which needed great skill) but this huge tree stump from a self seeded willow defeated him, and Steve had to be called to use the split front bucket. 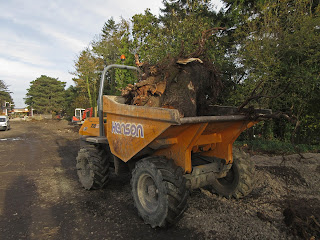 It felt a bit like 'open wide' and - 'whump' - the massive tree stump dropped into the dumper, shaking it from side to side.

Forward vision was impossible, we picked our way to the dumping site by peering round the side and driving very slowly. 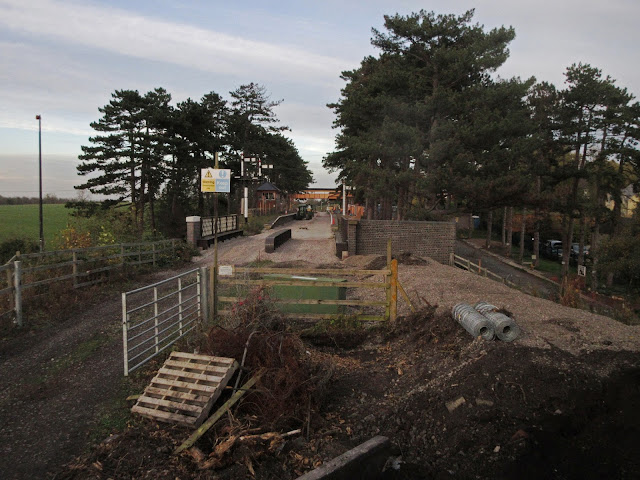 This is where we are at the moment. The bund is removed up to the bottom RH corner, with another 20 yards to go up to the wall where the old wooden signal box once stood. Beyond the rolls of fencing wire the bund is recent. We put it there using spent ballast to enable the fence line to continue, but tomorrow it too will go and then all will be level. The fence will go on to the shoulder of the embankment. The gate and fence will need to go as well. 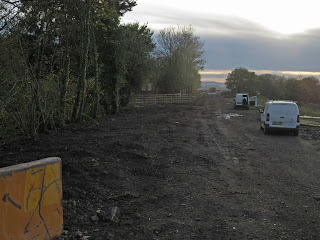 Here's looking the other way. The disturbed flat area on the left is where the bund once was.
The embankment is very wide here, you can see how it easily accommodated 4 tracks next to each other. It's huge really.
One could imagine a reinstated siding here, with perhaps a waiting DMU stabled in it to allow a loco hauled train to go by? 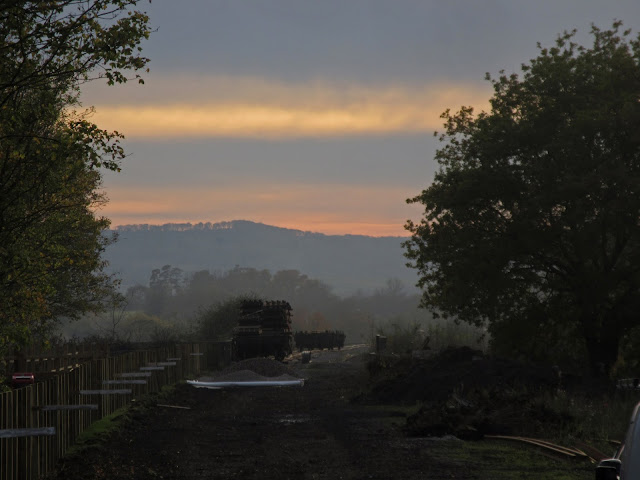 Another atmospheric shot. It's so easy at Broadway. The extension train sits on Childswickham Road bridge, with the rail wagons close behind. The Terram is rolled out and there are now 5 heaps of fresh ballast waiting to be levelled, ready for track laying in a week.


A bit of history.

George Bryant, former signalman at Moreton in Marsh, took these photographs of the goods shed during track lifting in the late 1970s. He was kind enough to share them with us. 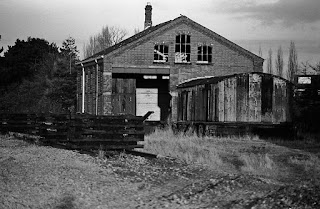 Here is the goods shed, bare and open, with the windows thrown in. Note the corrugated iron (fruit packing?) shed attached to it. It is no longer there today. The down line is being lifted in the foreground. 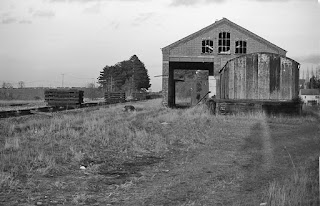 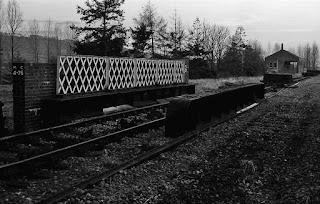 The corrugated shed stands on a raised platform. It is probable that when the shed and platform were removed that the brick and concrete slab rubble was taken to the northern side of the goods shed, from where we are now removing it again.


This view across Station Road bridge shows that the area immediately south of it on the left (where the box and the siding were) is flat and grassed over. Consequently, the rubble can't be from the 1963 demolition of the station, as it clearly isn't there in the late 1970s.
The up line has already been lifted here.
Posted by Jo at 18:59