Out into the country

One of the unseen jobs on the railway is accompanying the tamper crew on one of their days up the line. A member of the PWay gang accompanies them each time, for the purposes of liaison and local knowledge.
Tuesday was one of those days, when our contractor B&R took their Plasser & Theurer 07 out on to the Broadway extension.

The 07 is open to hire by any railway, so moves about from job to job. This week it was based with us. 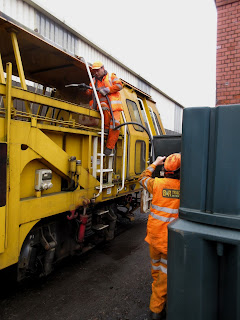 The first job of the day was to refuel it. The tamper has a high revving diesel engine, which amongst other things runs a hydraulic pump that propels it along and operates the tamping tines. 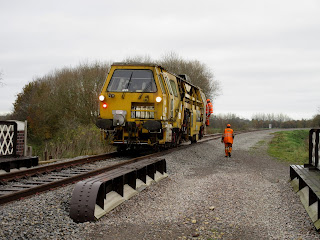 The job for the day started 150m south of Little Buckland bridge. This is actually on the recently lengthened operating section, but as the track settles down in use, you have to come back and correct it here and there.
From here the tamper travelled up the line to Pry Lane bridge, measuring as it went. It does a recording, prior to the job. 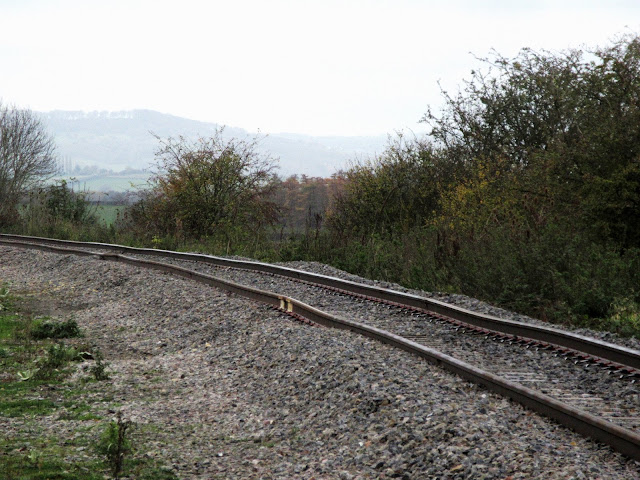 Then it came back to do the 150m south of the bridge. In this zoomed in picture (which exagerates the defects) you can see that a couple of twists have appeared. 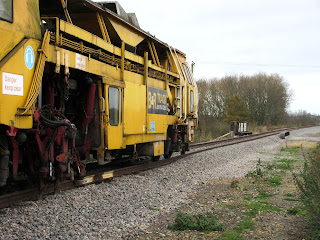 Here is the 07 on those twists, which were easily removed.

If you look carefully, you can see a low bit between the tines and the front bogie. This is lifted as the machine moves a long, a bit it a time, and tamped, a bit at a time. 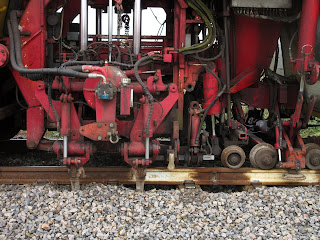 The wheel just in from the right lifts up the rail, and then the tines descend, and vibrate the stone in under the sleeper in question.
The spot between the white marks was actually the pulling point for the second 1000m of CWR, and hadn't been tamped before, hence it was a bit lower than the rest.
The operator sits in a small gondola suspended under the machine, just off to the right. All he can see is two sleepers, directly ahead of him. A second man sits in the cabin, and makes sure the machine doesn't (very slowly) run over anything. 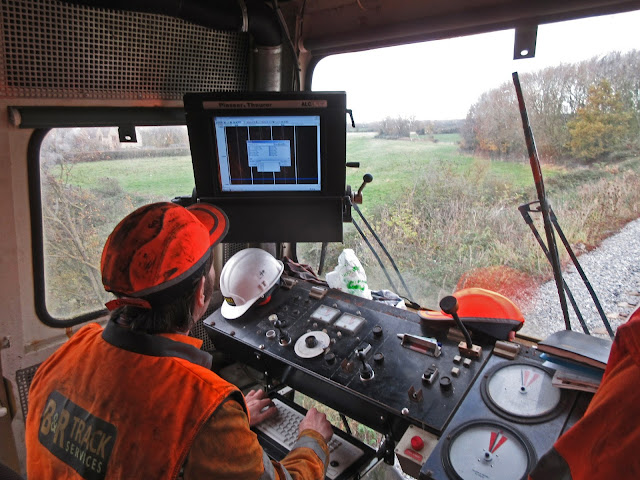 This is one of the driving ends. Bob (the 'B' in the 'B & R track services') is setting up the machine on the track recorder, after one of the measuring runs. On the right are two dials which show the attitude of the machine.
Not visible in the picture: the microwave and the kettle! You are out on your own here. We didn't even stop for lunch, these are hard working people. 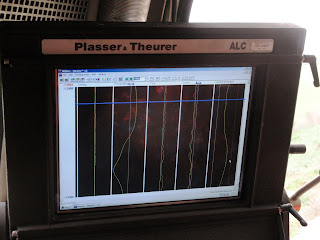 The screen of the track recorder shows various attitudes, and also top left in red the distance still to be travelled to the end of the measuring run.

That was handy in the dark, as we couldn't see where we were... a beep tells you that you have arrived. 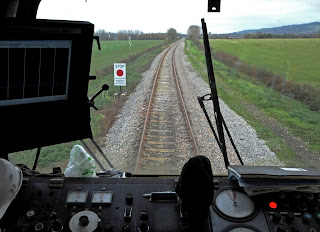 The second job was to (re-) tamp the last of the three 1000m CWR sections after an additional ballast drop. That's now ahead of us. 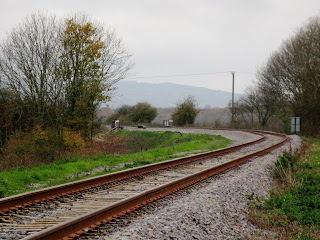 Behind us is the curve north of Little Buckland bridge, a job just completed. Doesn't it look good? The back of the stop board is on the right, so in the foreground is the start of the next length of CWR.

Can you imagine that iron ore and coal trains hacked along here at 60mph? 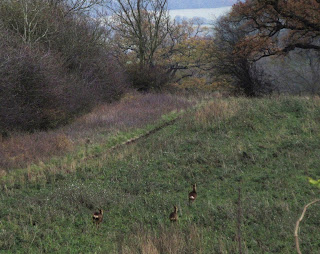 That would have scared the wildlife. Well, we did anyway. Here are three roe deer galloping away from us across a field, their white back ends hopping up and down.

They gathered at the top and peered back at us, as we slowly ground along with a steady drone. 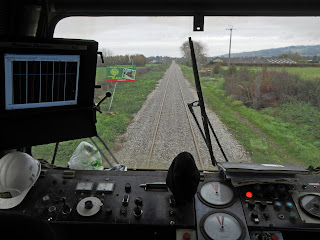 A bit further along, and we have reached, on the left, the sign representing the Gloucestershire-Worcestershire border. Broadway seems miles away here. Well, one mile anyway. The problem (for the PWay gangers) is that our railway is one of the last ones to be built in the UK, and was laid out for fast running. There are many long straights, unlike some of our colleagues in the industry, who meander and wriggle through narrow valleys. Inside the train you don't really notice this, as the Cotswolds hills and stone cottages slowly drift past. Very pretty. 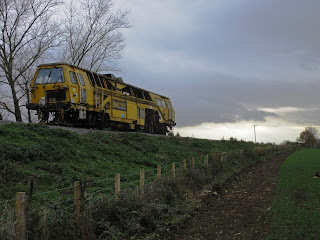 Here's a picture you won't see very often, as the tamper approaches bridge 4 at Peasebrook farm.

There is new fencing all along here, and the bridge is private. Once the line is up and running, steam locos will be pulling away here, as it is uphill. 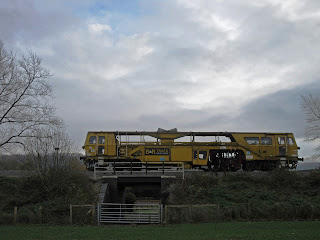 The tamper slowly crosses over bridge 4 at Peasebrook farm. The Cotswolds edge is behind it, and the clouds are gathering in a winter sky. 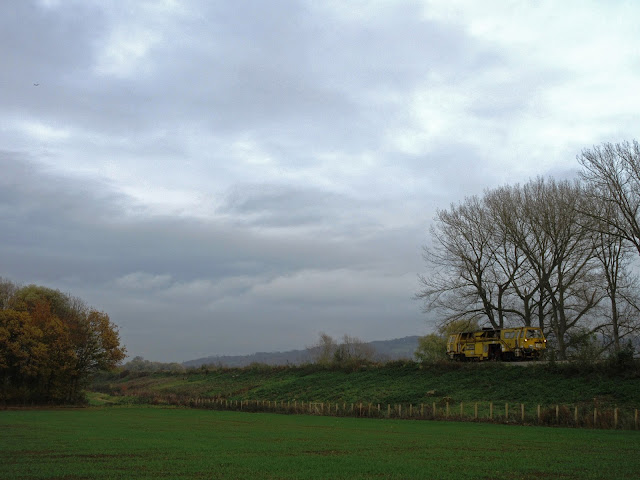 Another unusual view, as the tamper slowly works its way north to Broadway. This area is quite inaccessible, unless you arrive here by tamper. It's so slow, you can get out, walk back to the bridge and into the field, take the photograph, back to the bridge and up the track, and the tamper is still very much where you left it before. It takes 3000 tamping movements for one kilometre, and today we did one and a half. It took all day. 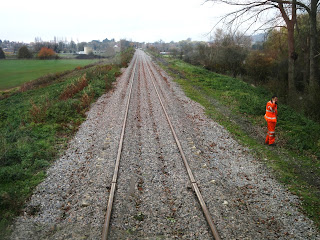 Another job for the second man is to warn the operator of any difficulties up ahead.
Here in the foreground we have the next pulling point, midway in the new CWR section. The rails here are only held together by temporary fishplates and clamps.
Further along is the breather (expansion joint) another thing to look out for. 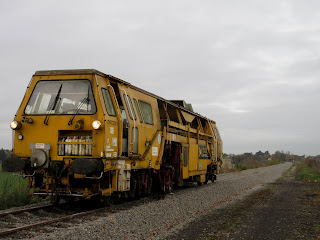 Past Peasebrook farm now, and Broadway is in sight. The start of the long curve through the station can be seen in the distance. It's starting to get dark. No matter for us, we just follow the instructions of the track recording machine.

With only another 300m to go at dusk, we decided to press on regardless to the end. This meant that we did not have to return to the job to finish it off the next day, when the regulator was due to come here. Worth the extra couple of hours.
The tamper here has paused for a bit of TLC. All the kit is on board, so it doesn't take long to fettle it from time to time. Good moment to take a moody picture too. 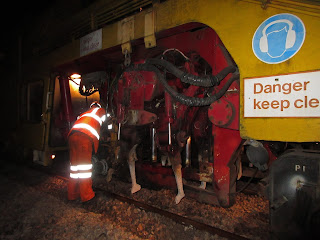 Finally we reached the end, the beep came and told us so. We were at Pry Lane bridge (bridge 3) although you'd never know it. We had a full beam on, so you could just make out the pilasters in the gloom.

To make the tamper fit for travel back down the line, the tines and measuring wheels have to be retracted again, and secured.

The next day the regulator came out and swept the same section. It is now ready for the final preparations for stressing.