A great day today, as we forged through the platforms in full gear.

The day started with a downpour, as we sat in the mess coach debating recent board events over tea. From time to time we stuck an arm out of the window, and - you need to be lucky in war - the rain stopped just as we were getting up to move out. 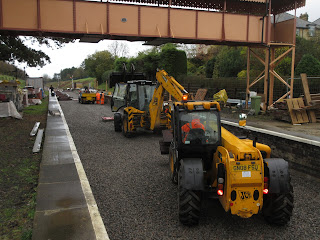 Here is the gang, arriving in force at Broadway with 3 vehicles. 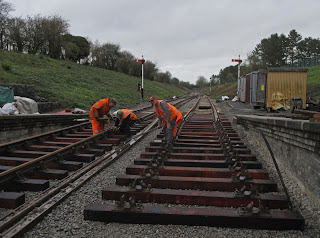 We spread ourselves into a number of smaller gangs, so that we could progress the work at different levels.

In the foreground a first length of 24 sleepers has been laid and is waiting for the pair of rails on the left to be lifted in.

On the left a sub-gang is clipping up the length laid in last week. 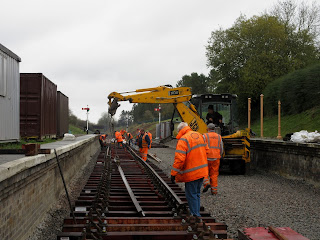 As the clipping up was going on near the platform end, another gang had been busy laying down sleepers in the loop, and this made it possible for yet another sub-gang to start dropping in more rail. 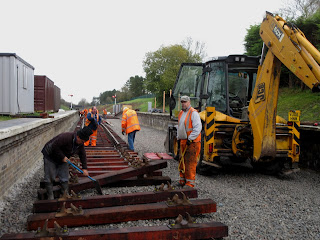 Laying the sleepers progressed at a pleasing pace, but sometimes we had to stop and dig out ballast from underneath them, as they ended up high on small ridges.

Steve levelled all this carefully, but these ridges had a habit of reappearing, due to vehicular traffic up and down.

The nips were just right for this job. 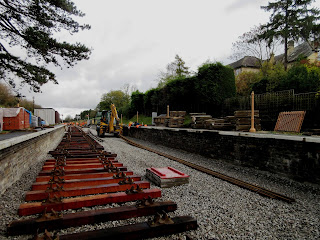 The sleeper layers absolutely zoomed along in the loop, but had to pause from time to time to let the JCB through with more rail. 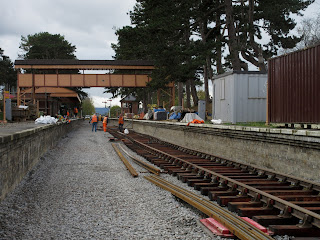 At lunch time the loop road had passed underneath the footbridge and was near the northern end of the station building, with the rail laying team not far behind.

The orange coloured rail lying in the six foot is the new rail destined for the platform road. You have to position this in advance. 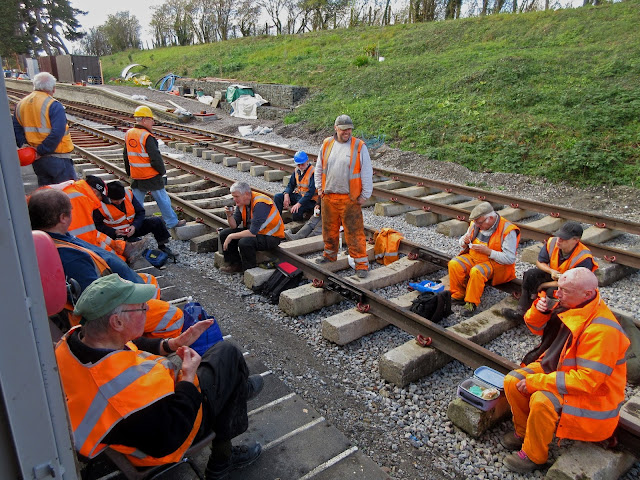 We treated ourselves to an early lunch, part in and part out of the BAG cabin, where we knew there was a big tea urn. Very attractive..... 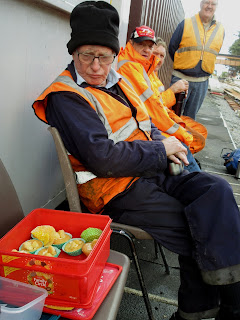 John was in charge of fairy cakes today. He cast a critical eye over them, and over the amount of money in the honesty box in the foreground.

Did you pay? How many fairy cakes is that you've had? 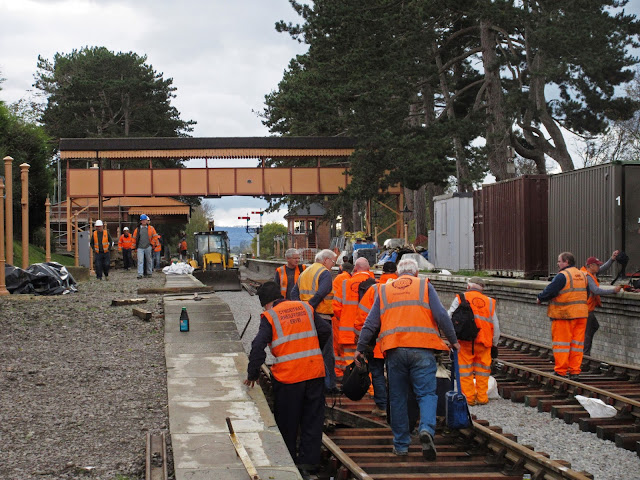 One o'clock, and a change of shift. The PWay gang march off back to work, as the station gang head for the tea urn. 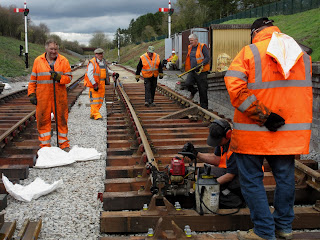 The new rail in the through road is ex steel mill and therefore undrilled.

Leigh here sets to work preparing the newly rail to receive its fishplates. 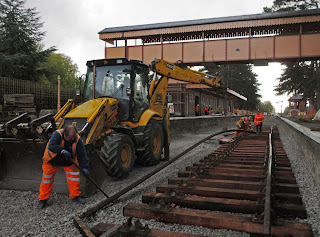 Meanwhile on the loop road Steve and Nigel were lifting in the next length of S/H bullhead rail, now just about under the footbridge. 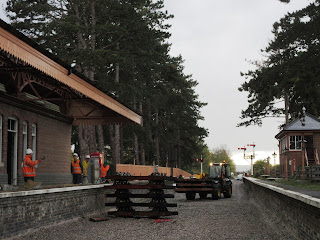 Further along the loop road the sleeper laying gang, delayed by a few last fairy cakes, found that Alan had not wasted any time waiting, and begun to stack up high the chaired up sleepers he was fetching.

A feeling of foreboding came over the three sleepers layers... 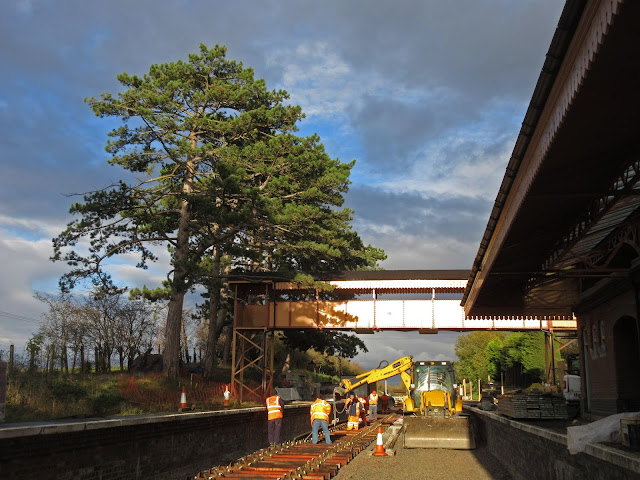 Behind us, the lovely evening sun began to light up the railing team under the footbridge, domiated by the venerable GWR Scots pines so typical of the site. 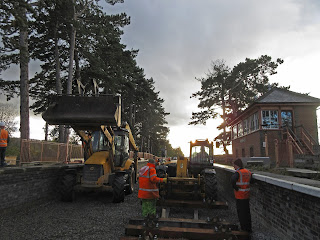 Now past the station building and approaching the signal box, the sleeper laying team on the loop road had to pause to let Steve through with the next pair of rails. It's busy here. 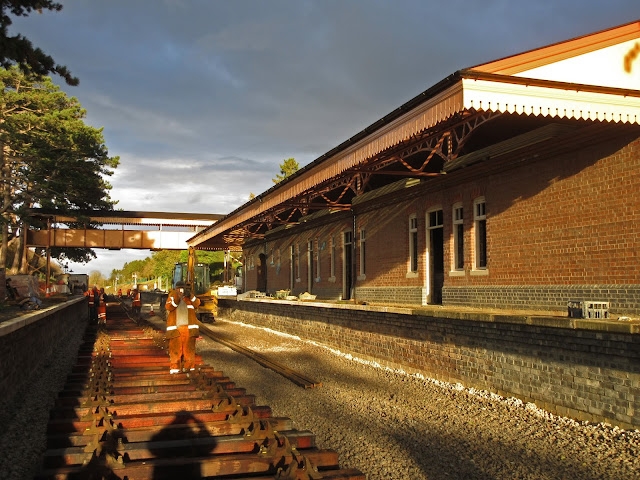 As the light of the setting sun hits the newly revealed station building, another photographer seizes his chance.
The dappled sunlight hits the trusses and arched ridge purlins on the canopy. The end wall, disguising the last room (a kitchen on the drawings) is now clearer after the temporary 1970s BR location cupboard was removed. Several others still remain on site. Will they also be removed? 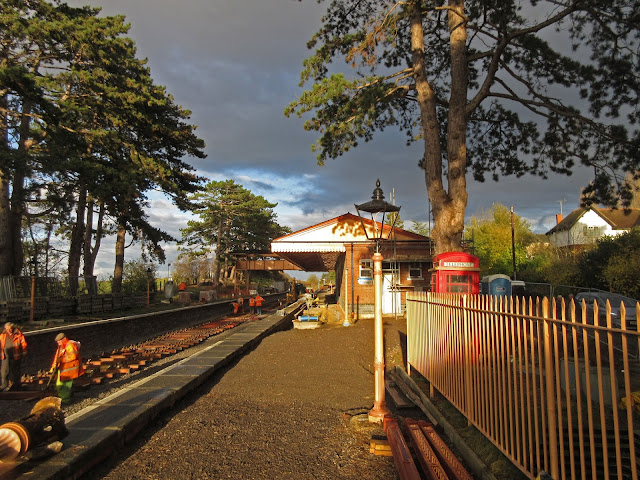 The evening sunlight is too tempting to continue with the smaller pictures, so here is another big one in all its golden glory. 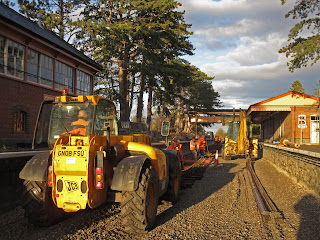 More rail is dragged through by Steve, this time SH bullhead.

The sleeper laying team is right in front of the signal box now, having laid out one of the two roads almost through the station site. 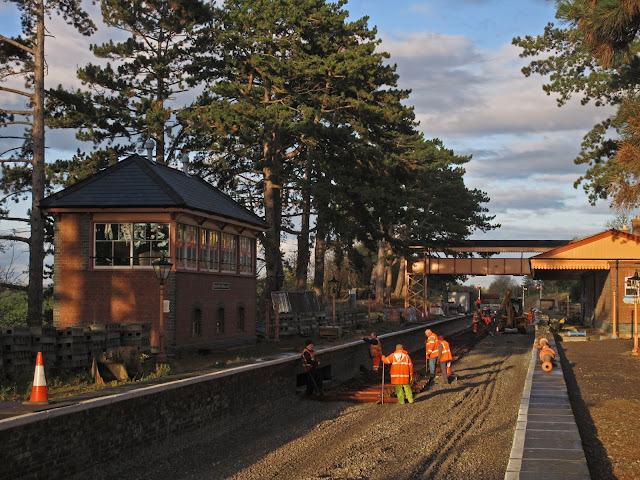 Here they are in front of the box, with a majestic row of pines along the rear.

The through road is way behind now. Although the intention was to move the roads along in tandem, in practice the presence of the JCB (as here) hindered the Telehandler in bringing more sleepers to platform 1, so we concentrated on the loop instead, bringing it out far ahead at the end of the day. 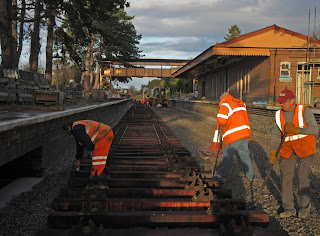 The three sleeper layers were on full time duty pulling the heavy chaired Jarrah sleepers off the Telehandler forks, so a small team followed on behind to straighten out the somewhat irregular result. 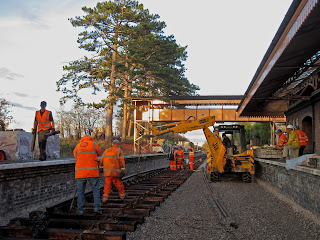 A few moments later Steve was ready to lift in the two SH rails he had just brought in.

Our total laid today was a respectable 8 panels, or 16 rails laid in. We were very happy with that. 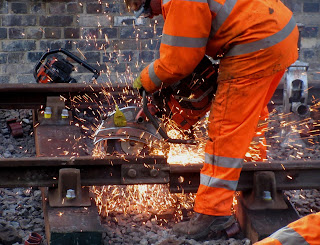 The last two S/H rails had half a fishplate on them still. An extended go with the 'animal' failed to dislodge the bolts. Ah, so that's why they were still on.
Steve was undeterred, and just cut them off with the disk cutter. No problem. 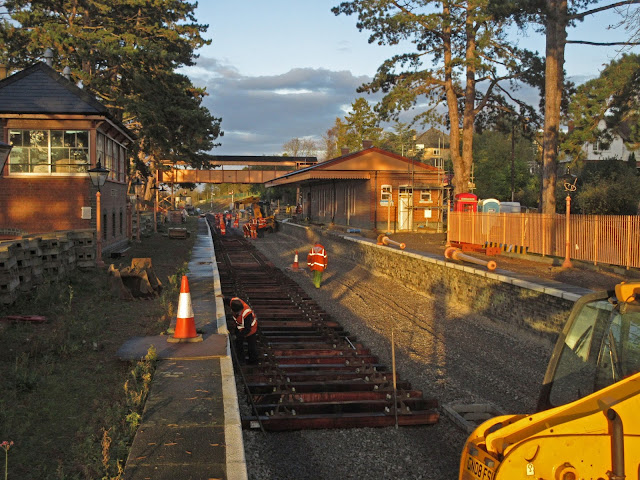 This picture shows the maximum extent of the sleepers laid today, now well past the signal box. Exact numbers laid were unknown, perhaps 200? The extension train has been cleared of sleepers in any case, and it will shortly be taken away again for reloading with concrete sleepers.
These are required to open the 'second front' at Childswickham on Wednesday, when the other gang will resume laying north. We want to get all the track in by the end of the year.

The Telehandler here is just making a 180 degree turn, in order to go back into its stable at Winchcombe at the end of the day. Its driver has just taken on the responsibility for the Broadway station fit out, and we fully expect that in future our Hi Viz safety gear will sport a compulsory tartan design, instead of just plain orange. We must move along with the times. 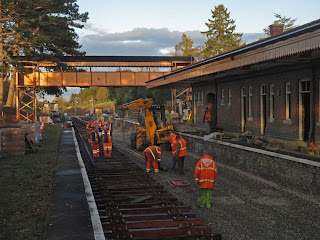 While the sleeper laying team has called a halt to the day - we are all over 65, some of us over 70 - the rail laying team cracked on with a last pair, now at the level of the middle of the station building. 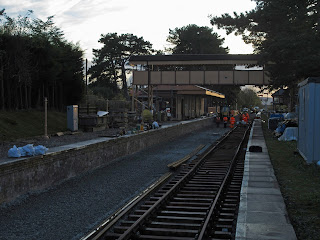 A last view from the other end. It's starting to get dark now.
The loop road seems to stretch right through the station, but it needs three more pairs of rails to catch up with the end of the sleepers laid. 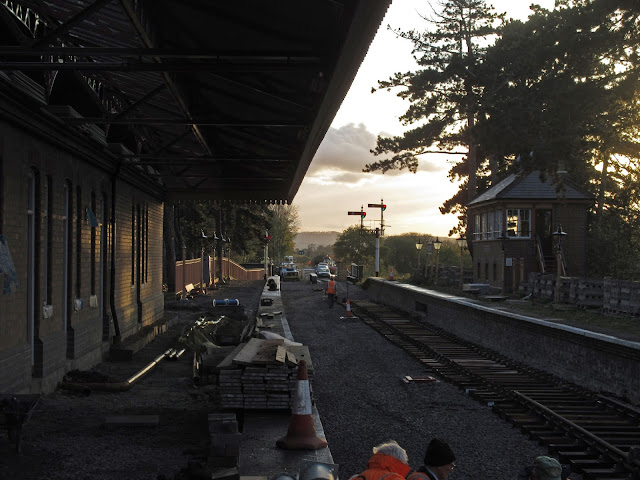 Here is the end reached today, seen from under the canopy. The sleepers laid out (which is only the first stage of track laying of course) have almost reached the southern end of platform 2. The rail head can be seen in the R/H foreground, and is now mid-building. The through road however gained only 2 panels today, due to the conflicting movements of the JCB and Telehandler. 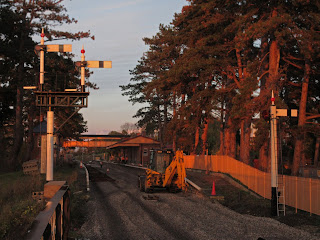 A last look a the end of the day, with the light now going quite orange.

On Monday we will continue with ballasting by the goods shed, and the remaining bund near the old signal box will be removed and dropped behind platform 1 at the southern end of the building.

News on the Broadway station cafe.

The cafe, for which the station building was laid out with dining room and kitchen, has just been dropped from the plans in a surprise move. Instead, the space will become a souvenir shop, with a coffee machine.

This picture of a similar cafe at NYMR Pickering station shows what it was intended to look like, a very close resemblance. Fireplace, wainscotting, Victorian wall and ceiling lights. 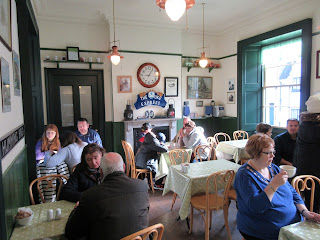 The wall space will be now be fitted with shelving, and the kitchen will become a store room.

Concerns about staffing the intended cafe have led to this last minute change of plan, we were able to ascertain.