Up to the goods shed

A scattered gang set to work today, with several jobs going on all at once.

One gang set off for Winchcombe, to chair up further wooden sleepers, which are now desperately needed at Broadway for laying.
Another gang joined the loco group to further their concreting of the inside and apron in front of the shed at Toddington.
A small group (4 gangers only) went to Broadway to meet Steve, and start the 'second front' resuming the track laying from the Childswickham bridge in concrete. We were small, but packed a big punch! 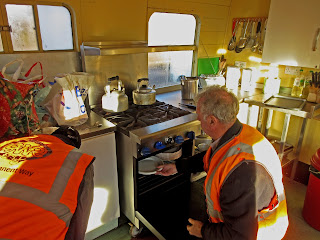 A frosty 1 degree start saw us cluster round the stove in the mess coach, hoping for a bit of heat to escape from the stove where the kettles were on.

Paul was warming the plates for lunch, which in kit form was piled up in shopping bags on the left.


The small gang of 4 set off for Childswickham, to find Steve already there. 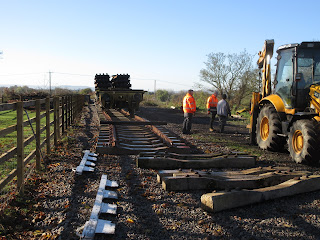 He had started unloading the extension train which was brought up reloaded with sleepers yesterday, and laid some bundles of sleepers out ready for lining up on the ballast.
The first thing to do was align correctly the end of the track laid, as it was veering off line somewhat. This resulted in a bit of a 'dink' which will be corrected once the train has vacated its spot. 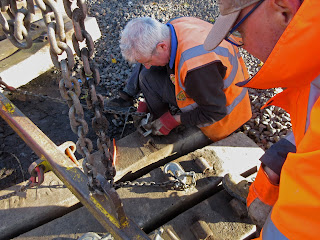 We were laying recently purchased s/h sleepers here, but some of them were less than fully useable, with the Pandrol holes sometimes blocked with dirt as in this picture, or worse still, the loops squashed flat so that the ends of the chain could not be inserted.

In the picture Andy is fruitlessly trying to poke dirt out of one of the holes, which in the end wasn't so much dirty as oval. No good. 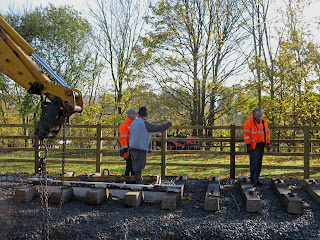 Here Steve is giving some advice on the straightness of what we just dropped in. It actually went very well, for a gang that had little practice in laying out sleepers, and only 4 of us too. 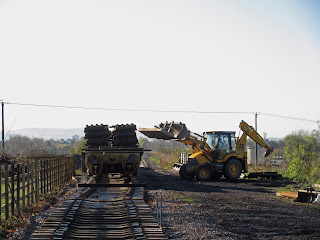 After we had exhausted the lot Steve had laid out ready first thing, it was time to get some more off the train. Here you can see the benefit of the wide embankment north of the bridge, which allows him to manoeuvre freely, as well as stack some of the supplies we are going to need later. 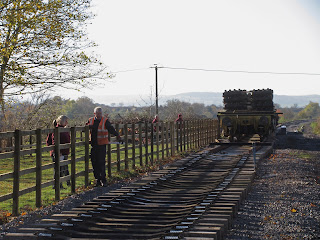 Both staff and customers from our neighbouring Carvan Club came up to chat to us, and we were happy to explain the goings on.

By now the first 26 sleepers (for one length) were down, and pretty straight too. Not too hard to drop the rail in then, in due course. 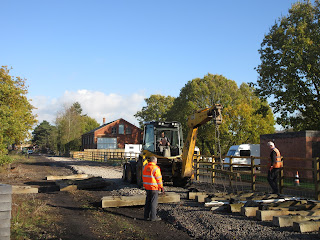 Here you can see the piles of sleepers Steve had brought in on the roadway, and sets of 4 sleepers being dropped on to the ballast bed laid only last week. 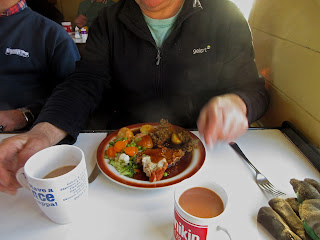 We nipped back to Toddington for a quick bite to eat. Actually, it was quite a large bite. On Maitre d' Paul's menu today:

Plus a mug of strong tea, and a jumbo roll of chocolate digestives. Even mince pies - in November? We didn't care. We were spoilt. Paul even joined us later for a bit of track laying too. 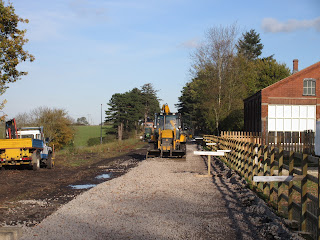 Then back to work by the goods shed, to find Steve giving the next bit of ballast a final regrading, with the mobile ballast indicator board, just to be on the safe side.

Looks about right, doesn't it? 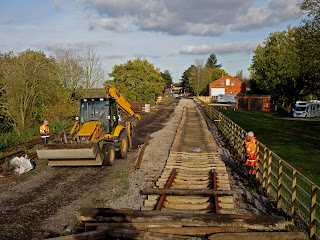 After laying out quite a line of sleepers (about 100 of them in fact) we felt it was time to lay in the rails that go with them. Steve here has just brought one up. It comes from those laid out a bit further along, ex Laverton loop, i.e. s/h flat bottom. All dragged up from about 2 miles away. 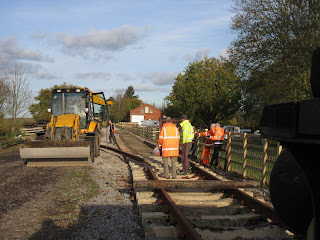 Our second rail of the day goes in, just ahead of the Conflat in the extension train. 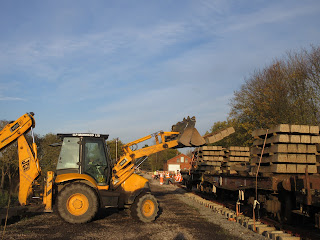 We counted the sleepers laid - 104 - and worked out that if only we laid another 4, we had 108 on the ground, and enough for a fourth pair of rails in. Soon done. 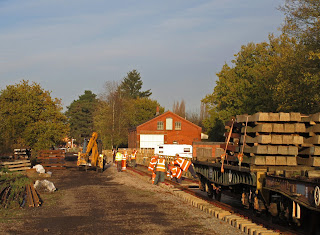 After lunch, our gang gratefully grew in size by those who had just finished concreting behind the loco shed.  The 'supplement' set to work keying up the first pair of rails laid - just 108 Pandrol clips to tie down, on an undulating loose rail. A little challenge for them. 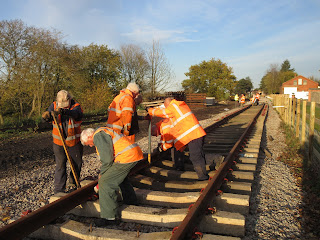 Here's the clipping up gang hard at work with the Pan pullers.

Far away in the distance is the original gang, now nearing the goods shed itself. 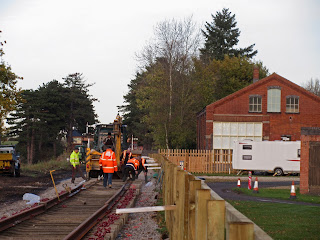 Laying out all the kit for keying up involves a lot of shuttling backwards and forwards with heavy bags of Pandrol clips. Some heroic person has done this - see them all laid out in a row along the R/H sleeper ends.
It looks as if we will need more bags of Pandrols in order to keep going. One bag doen't go very far. 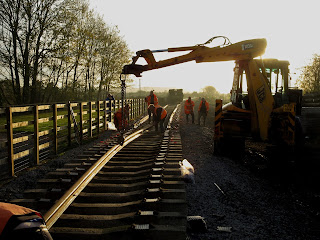 As the sun set, and the temperature began to fall again, we laid in that fourth pair of rails.

That supply train looks quite far away now, doesn't it?

We're about 75m nearer our destination now. We should meet the others laying south between the platforms somewhere near Broadway station road bridge. And before Christmas too. 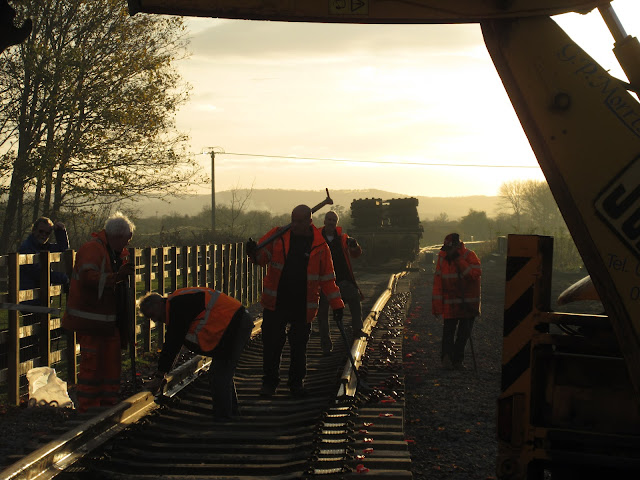 Heigh-ho, heigh-ho....  the Pandrol clippers start to return home, while the railing team still has one rail to go. 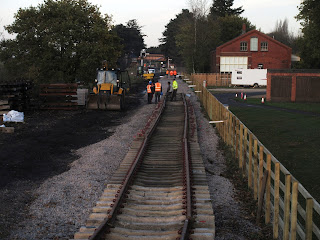 This was the end of the day view of the works. The nearest rpair of rails is fully clipped up, the next ones have all the kit laid out, ready for next time. We still have another 100 concretes on the train, good for another day's work next Wednesday. Of course the track also needs tweaking to its final position, possible once the train has gone again and you can walk back a long way to get a better view of the curve required. 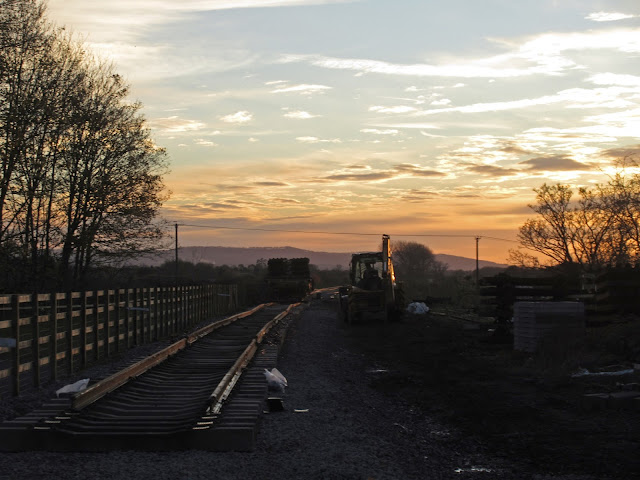 A sunset shot at the railhead - yes, its possible, not just at the station. Can you imagine a Hall running into the site here, in the setting sun? The glint will reflect all along the train at this time of day. 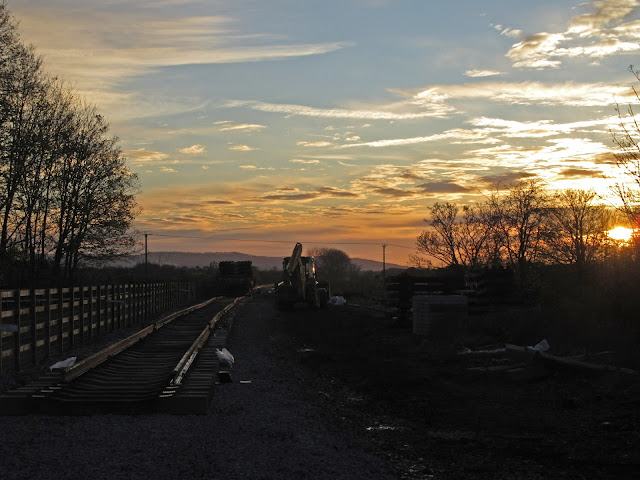 Our last shot today. Steve is tidying up, the sun is about to sink below the horizon, we drive home in the dark. It's winter.