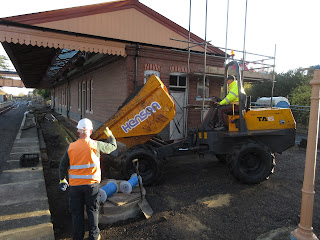 A request came in for back fill material for the platform, and as it happens, we were removing the (old) signal box end of the bund, where there was some of the spent ballast.

Six or seven dumper loads were taken over to the station, where it was dropped at the southern end and under the canopy, as far as the current ducting installation allowed. 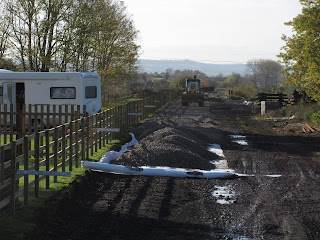 Then it was back to ballasting by the goods shed, to get a decent stretch ready for Wednesday, when the 'second front' will open here. Our Wednesday gang will lay here in concrete sleepers, resuming where we stopped a while back by the unloading area further back. It's wet and sticky up here, hence the use of the Terram. Steve recalled that after track lifting here in 1979, the contractor also took out the ballast using a drag line and lorries that came in at the former station site. So today we're pretty low down.


Fishing around in our old photographs, we found this picture of a lorry parked on the old station site at the end of the 1970s.

After the chat with Steve today, it seems clear that it was there to remove the ballast we are now having to replace. 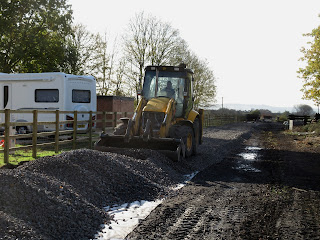 While we were bringing fresh ballast up from the car park, Steve started spreading it out on top.

This enabled him to give the dumper driver some feedback as to how high to pile it. 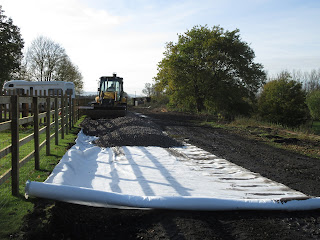 With every load that came up from below, we had to stop and kick the Terram out a bit further.

This is our second 100m roll today already. Good progress, despite the ice cold start, and the water on the dumper seat.... 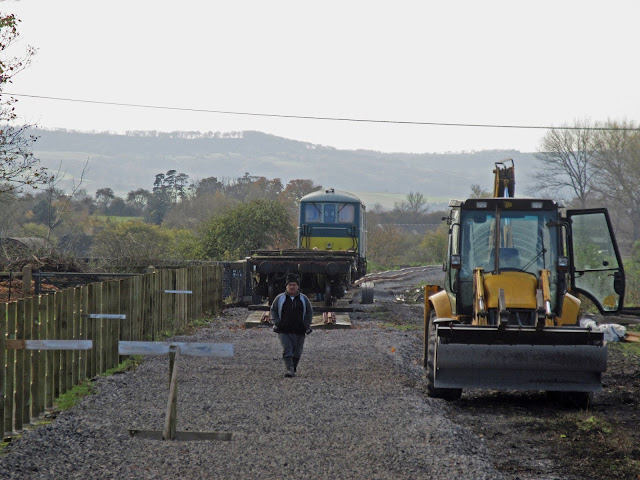 Two things to note in this picture now.

Firstly, you can see Steve comparing the actual height of the ballast he has levelled, against the desired height, as per white finger boards. We think he got it just right! A clever system, devised by two of our PWay gangers. It really works.

Secondly, the class 73 has arrived in the background to pick up the now empty extension train. Good coordination here. It's going to take the wagon down to Winchcombe to be reloaded with concrete and Jarrah sleepers, for each end of the laying exercise. 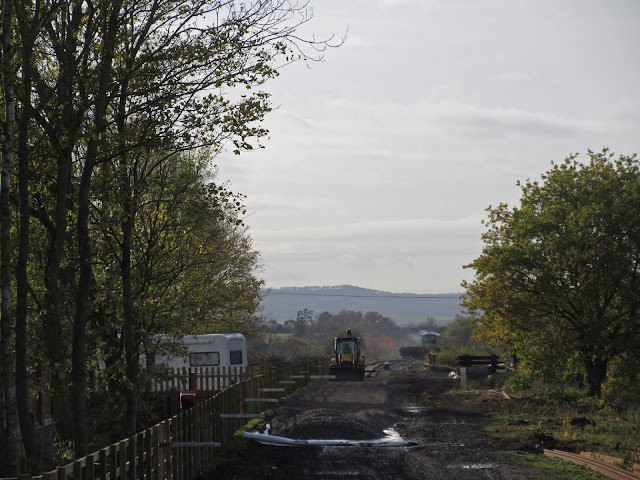 Moments later. Steve, having checked progress with levelling, has resumed pushing the ballast with the JCB, while the class 73 makes a slow and smoky departure in the background. 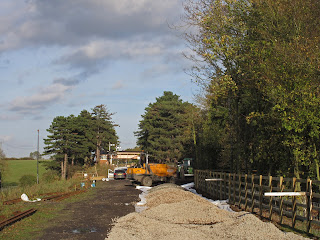 Around lunch time the ballast had reached its apogee, as it were.

Beyond the corner of the fence the terrain wasn't quite ready for any more yet. The dumper has parked up by the next bit that needs clearing for Terram. 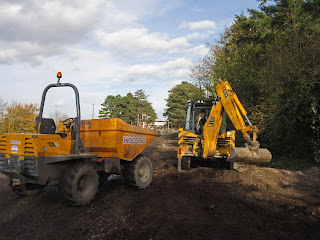 Steve then came over and cleared the triangular bit that comes next. The fence line here takes a diagonal line a few yards back, and then continues along the Cotswolds shoulder of the embankment up to the wall by the former signal box. That length still has to be erected. 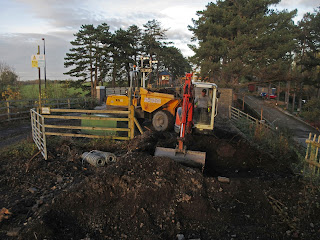 Our mission ('should you decide to accept it') was to remove the remains of the bund up to the site of the old signal box. We're going round the back of the site access gate here, and this will come down very shortly as it is clearly now redundant. 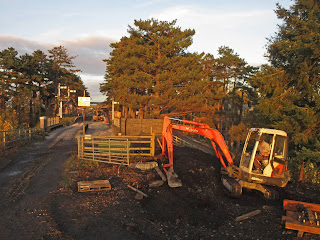 Once again the sun weakened, and then turned orange. Just as we got to the last few helpings, the mini digger started to hop along on one track and wormed its way in this manner up to the dumper.

Strange. It turns out that it had a torn track, so that put an end to today's digging activities. If its key can be found, we could carry on tomorrow using the Broadway mini digger, which is parked only a few yards away.

At the end of the day we got as far as this - ballast brought up and levelled to just beyond the turn in the fence line. One more day could see us join this ballast with that heading south from the bridge. 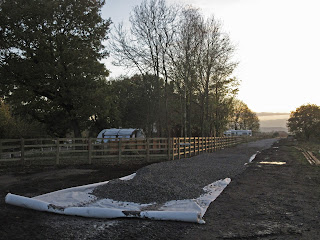 In Stalinist times, a production worker at the people's own perambulator factory was asked how he enjoyed his work.
'Fine' he said, 'I am really motivated making these prams for the greater benefit of the people.
The only problem is that, once they get to the end of the production line, they are Kalashnikovs.....' 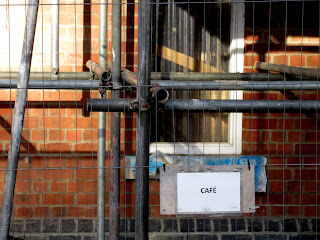 Outside on the Heras fencing we explained to our many visitors what the different rooms in the building were for.

This photograph was taken today.

Now it seems that two years ago it was decided to give our visitors a shop. We had no idea; indeed, several volunteers at Broadway were looking forward to working in this cafe after the build was completed, until a few days ago.

This blog is just a chronicle of a motivated volunteer giving his time for the Pway and Broadway gangs. Yesterday however it was overwhelmed by the largest number of reactions ever seen on it - 74 at the time of writing. All this because of a small PS at the bottom: the Edwardian cafe is cancelled, it will become a shop.

If you are disappointed with the cancellation of the Edwardian cafe, then make your feelings known to those that decide.