Through, and out of the station

A surprise visitor was found this morning in the car park at Toddington: 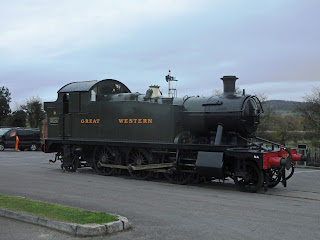 It's newly arrived 5526, a visitor from the South Devon Railway. What a classic branch line engine, such elegance. She was built way back in 1928, and has now done more than a million miles in traffic. 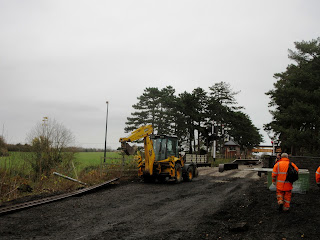 After inspecting the visitor, we had tea and biscuits, and then set off for Broadway.

Here Steve was already on site and busy dragging up rails for us. 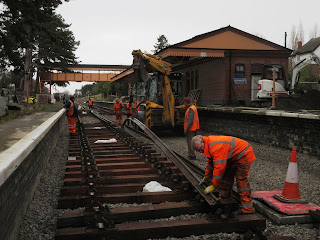 We had quite a few sleepers left from last time (without rails laid in) so the first job was to do just that.

The weather was pretty awful today. No one seemed to anticipate it, but we had a steady and very wet drizzle that lasted all day, without let up. We got soaked. 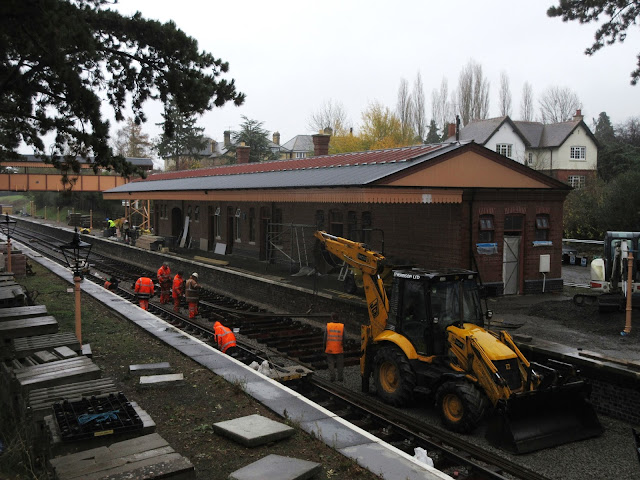 We alternated the laying in of rails, first with the Malvern side and then on to the Cotswolds. In this picture we are laying the last panel in front of the station building - soon we will be through. 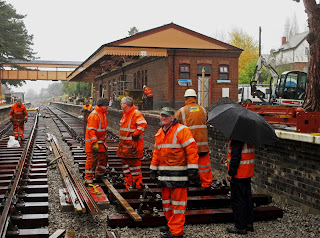 The rain got so bad that one unnamed gang member even got out an umbrella. Well, the Broadway gang was working indoors, so why not us? You can't do much track laying while holding on to an umbrella handle though. Pass me that... oh, never mind. 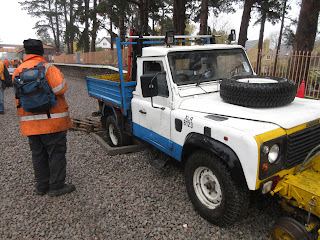 Much hilarity resulted from this little 'incident' (we don't seem to have accidents any more, although this looks very much like one) where the reversing Landie suddenly wouldn't go backwards any more, even though the accelerator pedal was firmly pressed down. 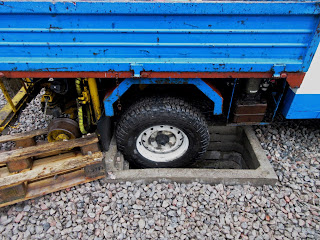 Ah, that could explain the lack of backward progress. 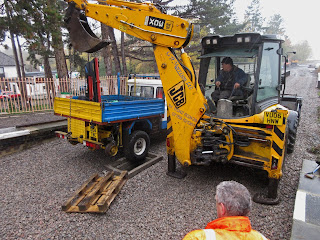 No problem though, we only find solutions!

The Landie was hooked up to Steve, and its driver told to drive forwards, its back end hanging in the air.

Who did this, who is the perpetrator? Tim put his hand up.

He then said that he was going to Singapore immediately, although it was not clear whether that was out of shame, or to glower at us triumphantly from under a tropical sun. 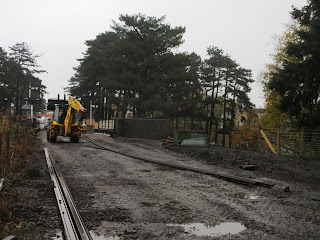 More rails were brought up by Steve, here crossing the site of the future southern turnout. Double track will continue up to this area, after crossing the bridge. 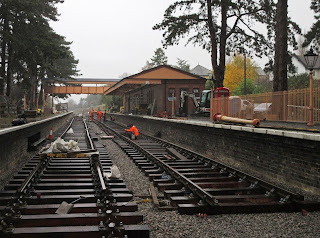 The rails laid in continued relentlessly throughout the day, here in a neck and neck race to the end of the platform. The building has already been left behind. 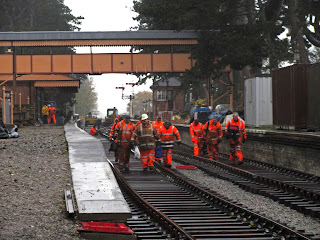 In the hope that it might stop while we had our lunch, we decided to break a bit early. The cake siren sounded, and the gang marched en masse down to the cabin (we recommend - it has a new heater!) 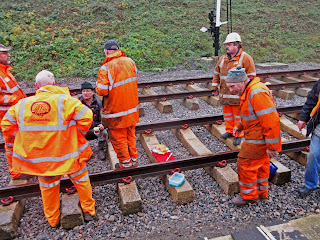 The Pway gang is so tough, a number even sat outside in the drizzle over lunch. Possibly it was because the fastest among them grabbed all the seats inside in the warm. Mrs. B's cake tin in the middle here was exposed to the gentle autumn rain, but not for long. It was swiftly emptied. 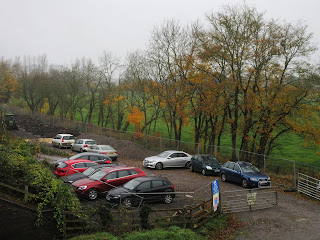 Car parking is getting very difficult now at Broadway, what with the trackbed up on the embankment largely occupied by ballast bed and vehicular traffic going up and down.
Luckily the big pile of trackbed scrapings at the bottom was removed by Adam and Steve, and taken up the station drive for re-use. In this way 5 extra spaces were created, which were gratefully employed today. It's still crowded though. 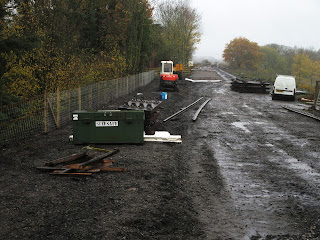 This is the latest view on top today. Steve has put up the new fence aloong the edge of the embankment on the left. Sleepers and a pair of rails wait to be used. Everything is black and slushy. There was even a complaint that the Landie was dirty - now that must mean really dirty. 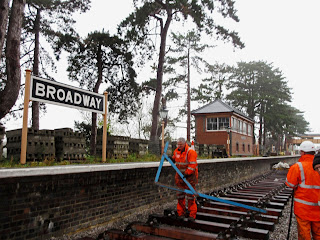 Having laid in as many rails as we could, we had to resume laying down sleepers.

With the exact spacings here a bit in question over the last few days, we are careful to get the measurements from the platform edge just right, here using our track gauge.

The BROADWAY running in board and signal box now form the background to our work. 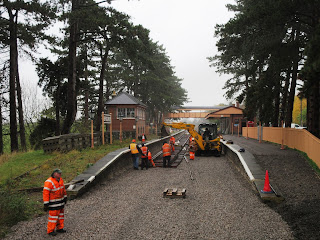 In this picture the loop road has almost reached the end of P2. Steve has squeezed in on the down line to lift in another pair of rails.

Pete is thinking about stuff. Sometimes it's good to stop and reflect on things. Where did I leave that corkscrew last night? 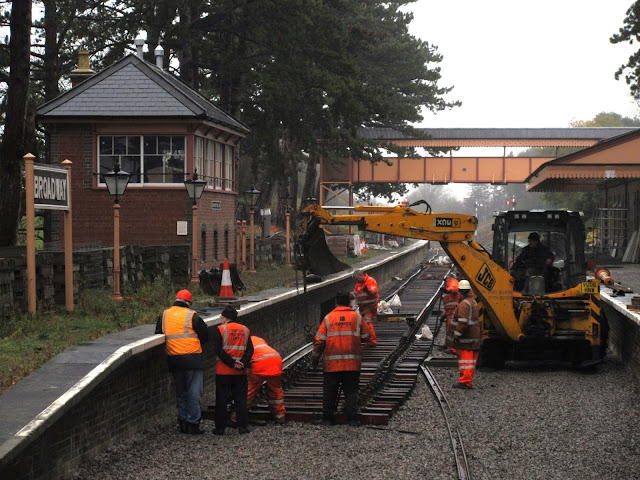 The rail going in here gave us a lot of trouble. At first it went fine, after all the sleepers were eyed in to give a nice straight line along the open chairs. The rail went in OK, except for one chair, where it decided to hang. The usual method for recalcitrant rails, a speedy bang on top with the digger bucket just gave us a loud 'clang' but didn't shift it. 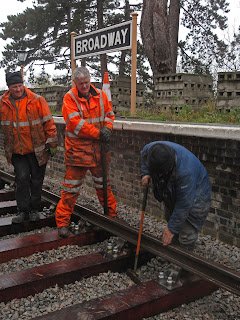 After watching us struggle with this rail from inside his nice warm and dry cab, Steve eventually got out - yes, really! - to give the situation the benefit of his 30 year experience with the GWSR.

Some hearty whacks with a keying hammer were prescribed, and effected. They didn't help either. Hmmmmm....?

The final and successful diagnosis was a burr under the second hand rail we were using. Moving the sleeper in question along a bit eventually solved the problem, after the rail was lifted out, and back in again. This time it did indeed drop down.

You can't beat experience with a book. 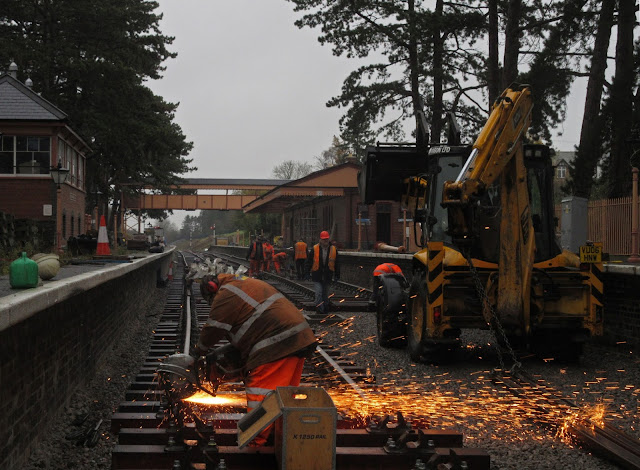 As we were laying in a curve, the inside rail was starting to overtake the outside one (well done that spotter in the last blog post) so Nigel stepped in with the disc cutter to even things up. 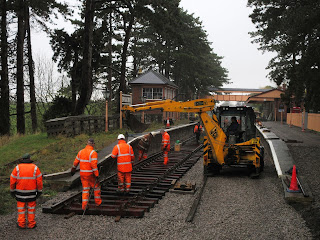 This allowed us to lay another 24 sleepers, enough for the up line to reach the southern platform end.

The first rail of the last panel today has just been lifted in here. 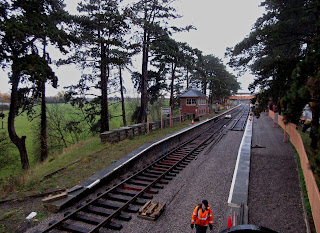 With both rails in on the last panel today, you can see here how far we got today, in one of the wettest days we've had so far.

There are just 48 sleepers to lay on the down line, to bring both roads to the platform end.

We're not sure just what we laid today, it's something like 7 or 8 panels, a brilliant result in the conditions. 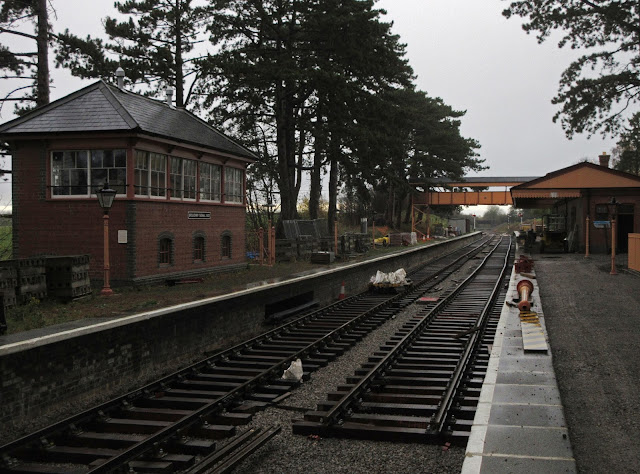 Here's an end of the day view of the track now through the station.
Signal box, track, station building, footbridge... it's all there now. This is pretty much what Broadway station will look like. The track still needs fettling and ballasting of course. We'll do that when it's joined up to the running line. 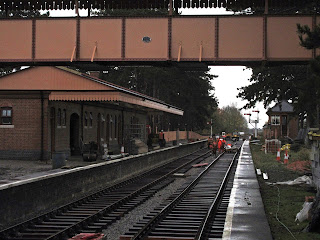 Looking the other way, the double track is laid past the buildings and seems to stretch into the distance.

Of course there's a gap of a couple of hundred yards to close still, and a turnout to be laid. 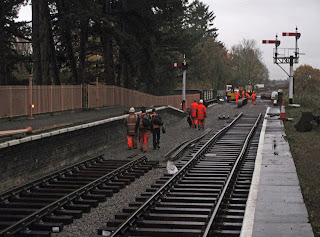 At the end of the day the bedraggled PWay volunteers trudge back to their cars. We were wet and cold, but triumphant.

Broadway station track is almost done, just the gap over the bridge to fill now.