The beast from the east hits us

Minus 6 degrees in the middle of the night, and the forecast for the day was that the temperature would rise - rise - to minus one at lunch time. How spoilt were we? Gee, thanks!

Nothing for it but to wrap up and get stuck in. No warm carriage shed for us, no canopy above us, and the job has to get done because the number of working days left can now be counted on one hand. 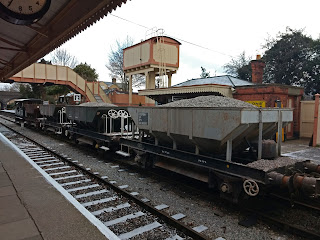 Yesterday the ballast train was out. Broadway urgently needed additional ballast, after the tamper used it up and left voids.

Luckily (or perhaps not) the train was already partly loaded. They took the train to Broadway, opened the hoppers doors and - nothing happened. The ballast was one big frozen lump. Well, we sort of knew that, so we loaded up the empty Dogfish and used the ballast immediately. Got the job done, regardless of the weather.

We took one crew to Broadway to shovel some of that extra ballast into low spots and accompany the tamper, while the main gang went to Gotherington. 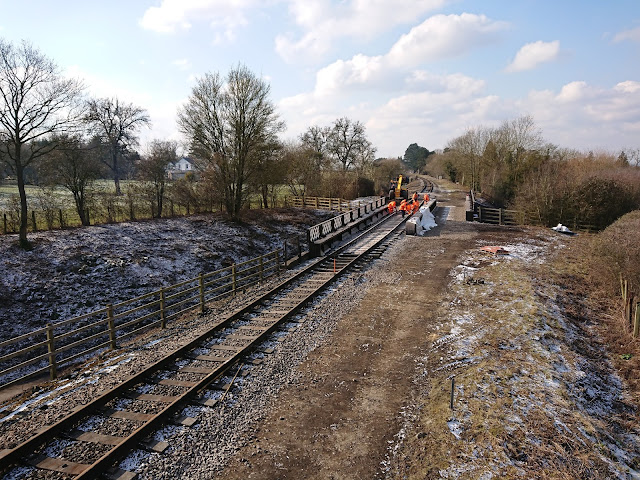 The jobs here were to finish off the last 18 SHC clips (just not quite enough time on Saturday) but mainly to get ballast in for the tamper tomorrow.
The 'drone' was out agin today, this time with operator Jonathan. It looks quite pleasant there, but it felt unbelievably cold, especially on the fingers, as warm gloves are not good working gloves for this sort of work.


First thing was just to polish off that clipping up job.

With the proper tools (the yellow sleeper lifter being wielded here, and the 'equaliser' to line up the sleepers the final few mm) the job went pretty quickly.

Peter has the lifter, Rick swings the keying hammer, while Dave - well, someone has to oversee the job, haven't they? 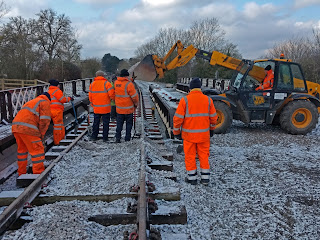 A bit further along, and look what happens to the colour when a snow cloud comes overhead. They were tipping in the ballast with the Telehandler, and spreading it around and under the sleepers by hand. 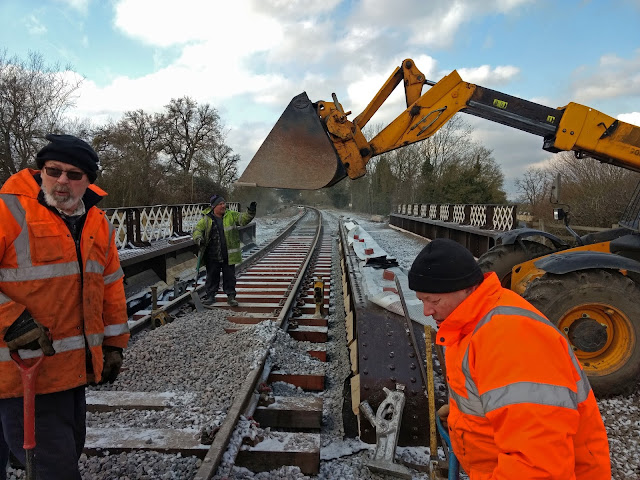 A bit more here, a bit more.....   WHOA !!! You can make life so much easier for the shovellers if you tip in the right place. 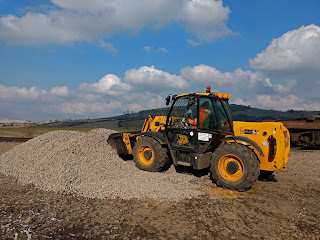 Peter garnered himself the job in the nice warm cab, and dug into 40T of ballast with gusto here. 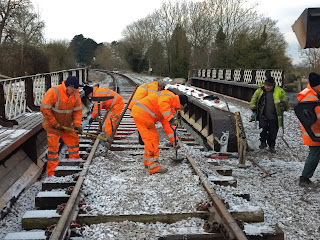 When a load of ballast has been tipped, the shovellers spring into action and spread it around, in particular under the sleepers, as the track has been lifted with the jacks to get more material underneath. The bed was a bit too thin for our liking (risk of hitting the bridge deck with the tamper tines if too thin). 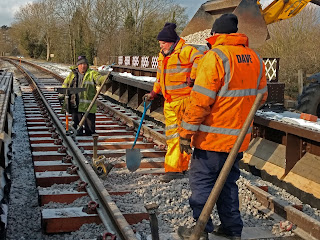 A pause in the shovelling is announced, while Steve next to the sighting board follows instructions from behind the camera for a bit higher, another bit...
The tamper will formally tamp this area tomorrow, then the bridge is fit for use again. 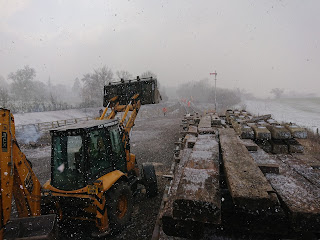 If the activity at Gotherington looked quite sunny in the morning, look how the weather changed after lunch! You can barely see the ballasting gang in the distance. In the foreground Steve is tidying up the site by loading the very last of the sleepers here, those that were really too bad to use, even in sidings. Thanks for the picture, Jonathan! 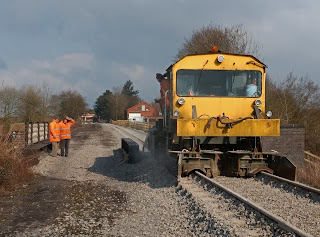 After lunch, a visit to Broadway to accompany the tamping crew and give them a lift back to their car at the end of the day.

Lovely sun here, as very slowly the regulator hove into sight and passed us by a in a great cloud of white dust. 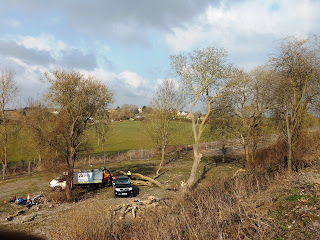 Below us, activity in the future car park. A contractor was sprucing up (is that a good word for trees?) some of the remaining trees at the bottom that had unhealthy branches. These were cut up and turned into chippings. 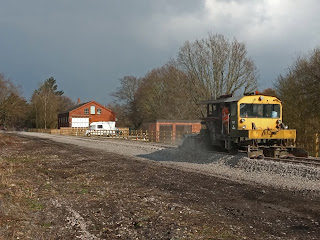 Above again, the regulator slowly whirled its way along the new fence, heading for the former goods shed.

The coming of the railway back to Broadway figured this month in the Caravan Club magazine, and they are delighted. It will make their site even more popular. 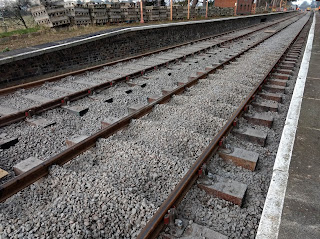 Walking ahead of the regulator a bit, we found this area at the southern end of the platforms which yesterday received a bit more ballast. Of course in the middle is not where you want it, but rather along or just outside the rails. 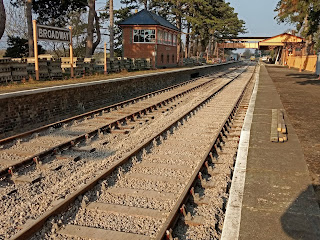 After the slow passage of the regulator the same place looked like this in mid-afternoon.

Very neat, with plenty of ballast just where it should be. 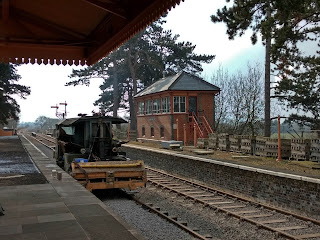 Here's the machine just trundling along the platform, seen by the signal box. In fact it made two passes, the first one here somewhat faster as it was pulling a plough to get the worst off first. 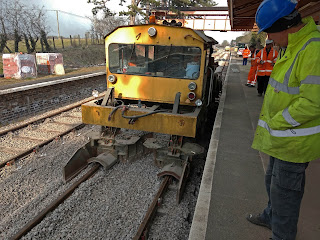 The back end of the regulator is modular and the 'ploughshares' can be adjusted to any of a number of angles, including two not so visible in the four foot. They heave the material outside the rails, where the outer ploughshares give it another push further away. 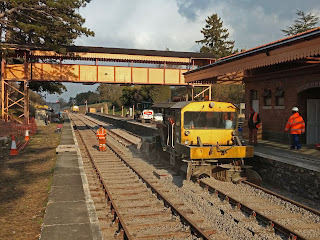 Another neat trick that it does is to lift up one plough unit in order to avoid an obstacle. In this picture you can see the LH unit raised up, as it is about to pass the raised catch pit, which it does not want to hit (and destroy). Beyond the catchpit the plough unit comes down again, a bit like a lady lifting her skirts to walk over a wet puddle. 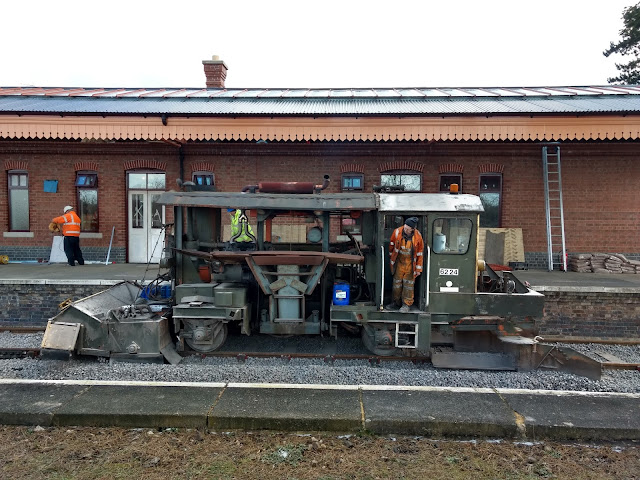 Here is a sideways view, not seen so often. This versatile machine was the first production model, and already quite a hit with its many features. Larger and even more useful models followed though, and a regulator today is as big as a Mk 1 carriage.

You can see a big one in action on the KESR here:
https://youtu.be/Tcuv-6u0buU 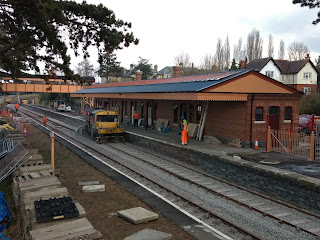 With this final pass the little machine completed P1 and then reversed back to the southern tunout, in order to come down the P2 road, where it regulated the siding up to the up line buffer stop.
That completed the tamper crew duties at Broadway. They have one more day's work to do for us (Gotherington for example), and the tamper unit will then depart for the next job on Friday. 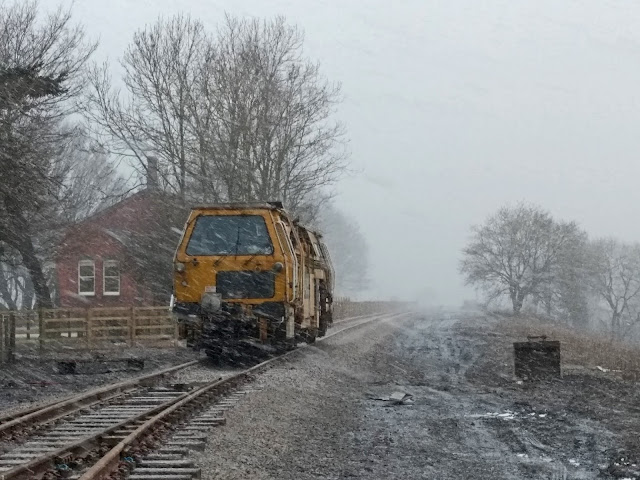 The completion of the tamping at Broadway coincided with a dark cloud appearing over the northern horizon, and this is what it contained.
It began to snow heavily. 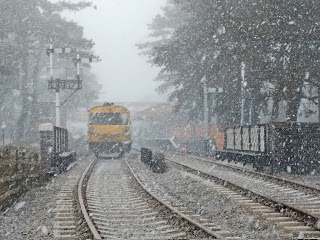 Where was that regulator again? Oh, there. It was actually being driven towards the camera, in order to hook up with the tamper and return to Toddington as a pair. 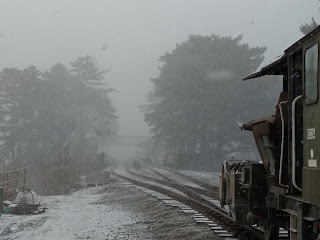 Here Broadway station is almost completely hidden in snowflurries. Remember all those lovely golden scenes in the evening sun? Well, this is what you can get in winter. The station approach to Irkutsk, you might reasonably guess. 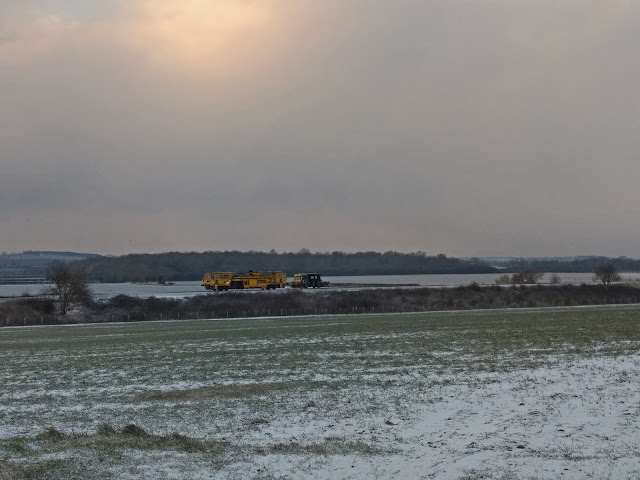 On its way back home to Toddington, the tamper here was caught at Laverton on the Broadway extension. Soon there will be steam trains along here. There will certainly be some on 21st March for volunteers, but possibly earlier for a test run to check everything out, date to be decided on (and it isn't tomorrow, have you seen the forecast?) 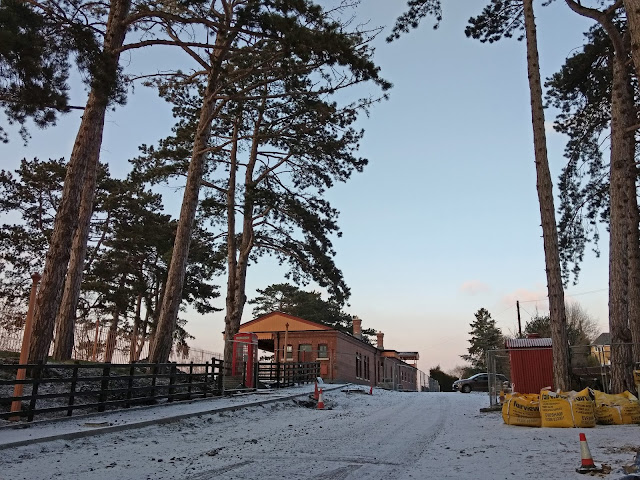 By the time the tamper crew were taken back from Toddington the same evening back to Broadway,  the station was clothed in snow, but he golden evening sunshine had returned. It was never far away in Broadway, the station with the magic light.