One of several tamping days with the B&R tamper, but it's the first one, and it was a lovely, cold sunny day, good for photography.

Here is our report. 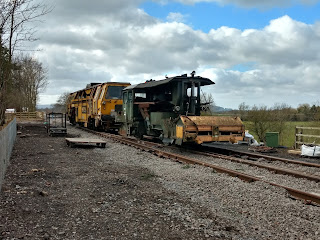 The B&R crew arrived at Toddington today, with their machine having been delivered the day before.
For reasons of expediency it was decided to push the regulator up the extension at the same time as the tamper movement, so that it would be ready when required without further movement. 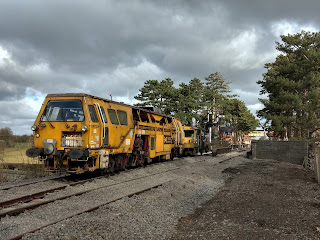 The regulator was parked by platform 2 at Broadway. It looks like the crew will be here for 3 days in a row. 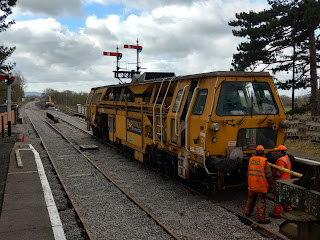 As the regulator has no buffing and drawing gear, it is transported using a bar, which is being detached in this picture.
Some of these regulators did have buffers, so that is perhaps an accessory to think of for the future.

The tamper then did a measuring run back down to near Pry lane, just north of the point where it left off last time. 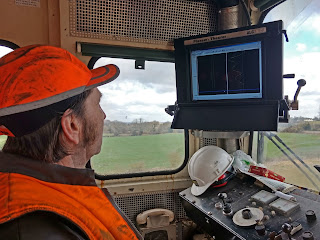 Here Bob is just taking a couple of minutes to go through the results of the measuring run, which unrolls like a scroll on the screen. You slowly tamp your way back to the beginning, and you get a beep when the computer says you are nearly there. 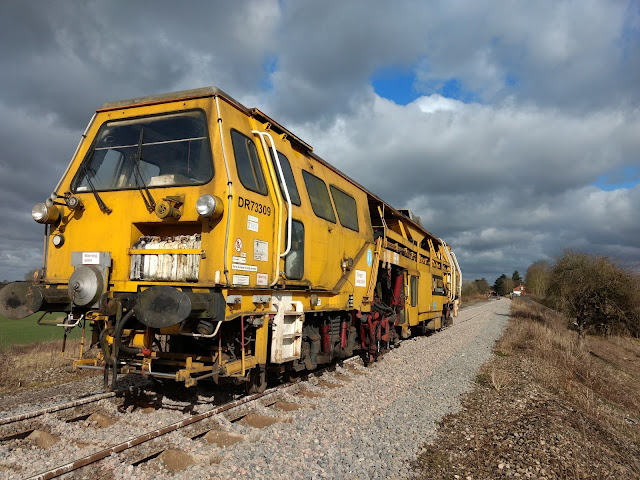 Here is the tamper just setting off from the Pry Lane area, destination: Broadway station! The weather was, on occasions, very sunny but with a biting cold wind out here on the embankment. All the pictures were taken when there was a gap in the clouds. It wasn't that sunny, you know. 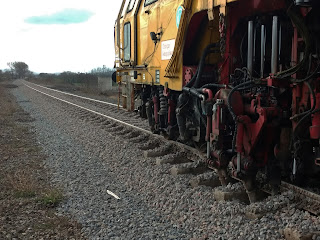 Here you can see where tamping has resumed, and you can make out how the track is lifted out of the ballast.
A pass will be made with the regulator and this should enable some of the voids left by the tines to be filled again. 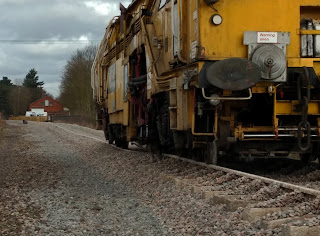 Looking the other way you can see how the track has different heights before and after the tamper passes. The rail is quite bendy in the middle.

That's the old Broadway goods shed in the distance. 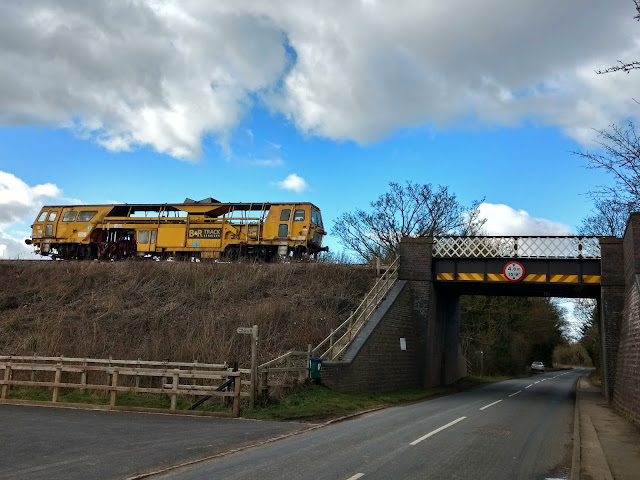 After an hour or so the tamper can be seen approaching the Childswickham Road bridge. It's so slow, you can take a picture from both sides, and it's still up there. But this is the pretty, sunny side. 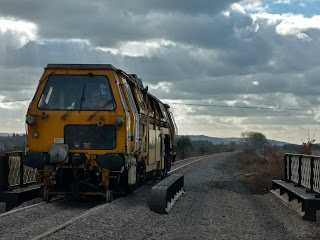 So slow in fact, that you can walk back up the road after your photograph, and still take another as it crosses the bridge from above.
No, we didn't have a large camera crew here, it's not the BBC you know. It's all done by one reporter. 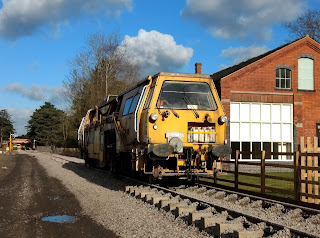 Here is the tamper a few yards further, as it starts to pass the former goods shed. We had lots of Caravan Club visitors emerge from their 'vans and come and stare at us.
Note how the sleeper ends are now bare, after lifting. More ballast is needed here to secure the track. 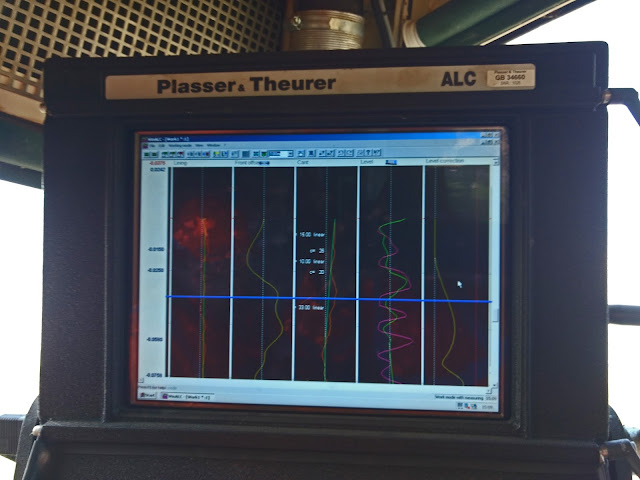 This is a peek at the screen that shows the measuring run, and how it unrolls backwards back to the starting point. The red figure at the top left tells you how many metres still to go. The line on the right is your blogger's heartbeat, after someone offered him a brew. Yes, please ! After lunch we arrive back at point zero, just short of the turnout, where we started the measuring run. Now we will go in the opposite direction, over the turnout and into the station. That also needs a measuring run. 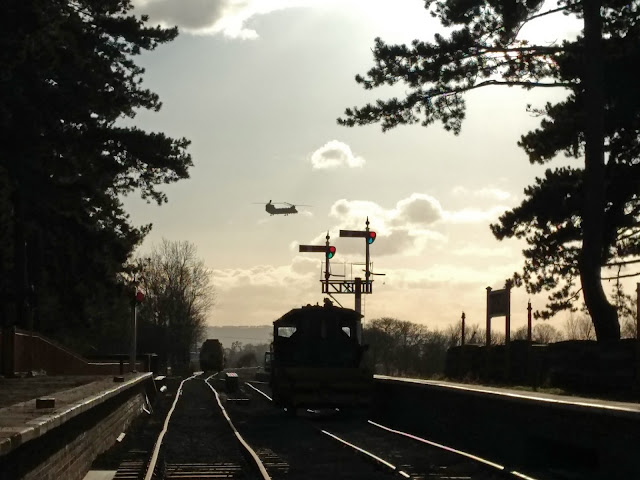 As the tamper does its measuring run for the next section, a Chinook chops its way along overhead. The regulator is parked by the P2 starter. 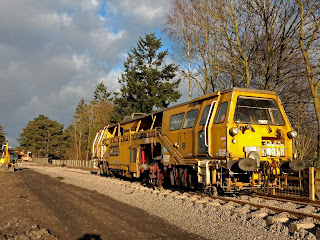 Here is the tamper just starting its somewhat trickier session over the southern turnout.

This model can handle turnouts, but with all the diverging rails on them it's a much slower job. We do the through road first, i.e. straight on to P1. 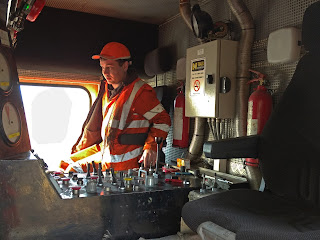 This machine is very versatile compared to earlier models, and the tamping sets can be split and worked one bank at a time. Normally the tamper is operated by one person sitting in the gondola underneath, with a lookout in the cab in front. For pointwork both operators sit in the cab, and work one side each. Here is Rick tamping just one side, while Bob is off somewhere. 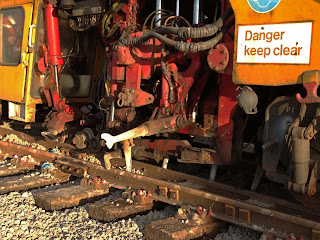 In this picture you can see what Rick (just visible in the gondola top left) is doing. As the rails on the turnout diverge, one tine is folded away and only a single one is used.
A hook (just next to the tine in the ballast) is used instead of the normal flanged lifting wheels.
This tine has a chunk missing on the end. It's all too easy to hit a rail or a sleeper with it, as each movement is controlled manually and sometimes you just get it wrong. Then it's an expensive  new tine and a scowl from the boss.


There's a video of the tamping in progress at this spot here:
https://youtu.be/dAl-5jv-jbI 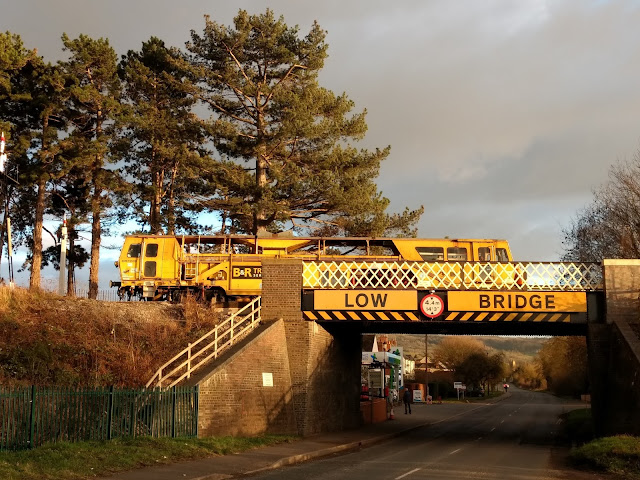 Near the end of the day the sun is low as the tamper slowly crosses station road bridge at Broadway.
The absence of traffic - just like in the 1950s picture in a recent Cornishman here - is a fluke, normally there are loads of cars on this road, despite the bypass. 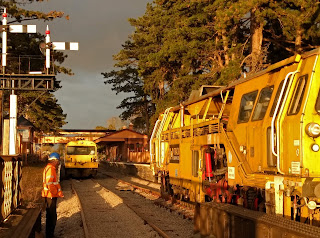 As we near the station, the last volunteer still there at the end of the day wanders out to see us in action. 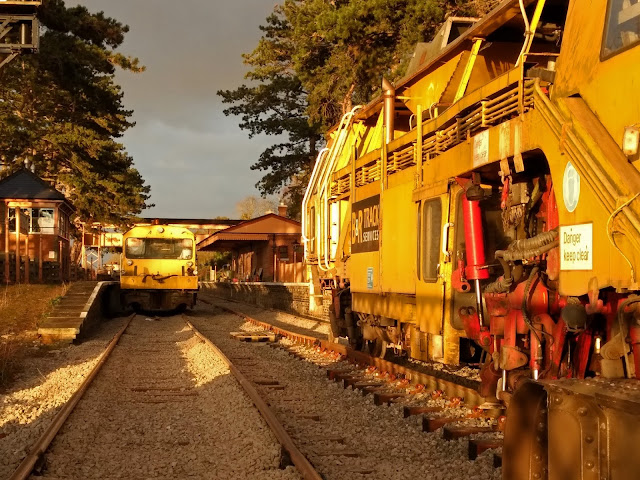 Tamper, regulator and the station buildings bask in the low evening sun at Broadway. 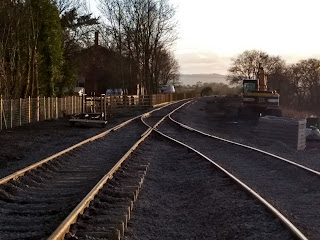 Behind us is the job we did today: a nice level line and even curve heading back off towards Pry lane. 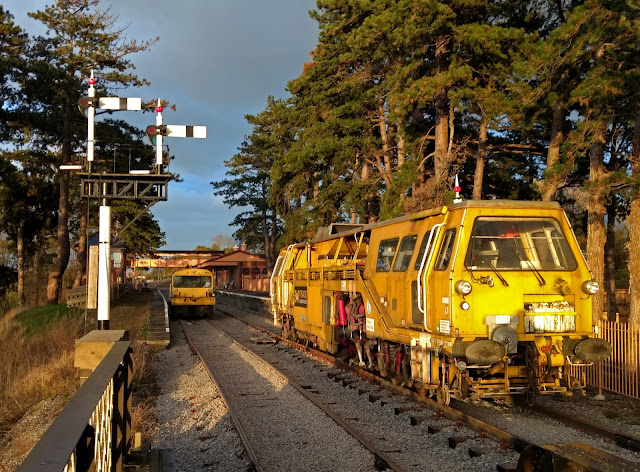 A last look of the tamper and regulator at rest. We then packed up our kit and took the big machine back to Toddington.
More tamping at Broadway tomorrow, but also regular PWay track work. You will read about one, or the other.

Take a look and wallow in nostalgia (if you were there, otherwise it's just interesting to see how they put all that track back on to a recently emptied trackbed)
Posted by Jo at 21:12