Progress with the turnout at last

It was another grim day. What is this, winter or something? Every time the Pway sets its foot outside the door, we have foul weather. This is the fourth week in a row. The forecast was for wind and rain, every hour from 9am to 5pm. And what hours do we work?

On the positive side, with Steve and Alan back, we made real progress with the turnout. First we have to get to work though.


Given the steady rain, there were two options:

Option A: Stand in the rain like a gnome and suffer
Option B: Cadge a lift with Steve and his nice warm cab (only for those who buy him a drink) 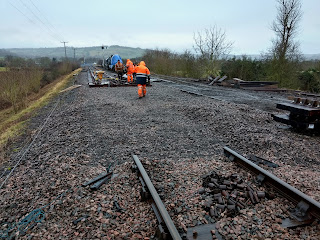 You will recall that we had pretty much finished the through road, but without Steve we couldn't lay back the plain track as intended last week. Well, Steve was back today, feeling better again, thank you. 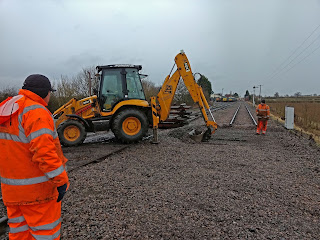 He jumped straight in and scraped off the high bit at the far end. Three men had a crack with shovels last week, but there's nothing like horsepower. In seconds the 20 yard stretch was ready to lay. 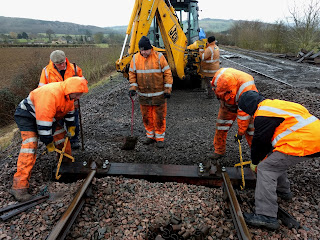 Because the 20 yard stretch is quite short, we weren't able to slide the sleepers off the forks as usual, but had to pick them up with nips from the adjacent pile. They were jolly heavy - Jarrah sleepers, with chairs on, and soaking wet. Even if only one of the four on the nips, it was borderline heavy for some of us. 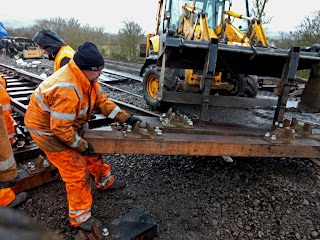 I say some, because others like Bert Ferrule here are younger and have these sort of sleepers for breakfast. With an almighty yank (who are you calling an almighty Yank?) he pulled the sleepers off the awkwardly proffered forks and straight into the crib. We gaped in awe. 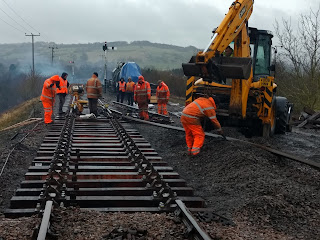 Soon the plain stretch was filled with sleepers, all nicely lined up too. Next, a rail. We can't just put back the rails that were there, because a long turnout has taken their place, so we need to measure and cut. 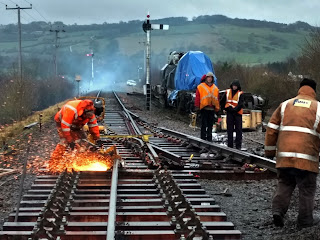 Chris gets the cutting job. There is a huge meteor of sparks, as we stand and watch, collars turned up against the 2 degree wind. 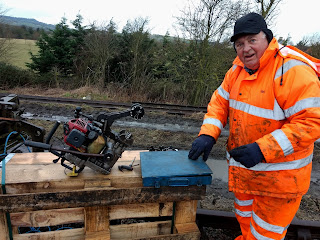 Neil is the 'driller killer' today. Wanna know how to fit a new bit for the Rotabroach? 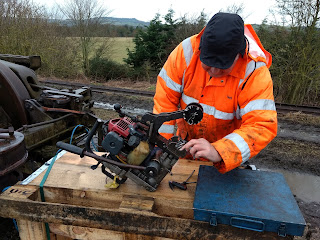 You stick it in here, and try not to break it, as they are expensive. But it did break ($+!!&***) because someone hit the rail he was drilling and the shaking snapped it. 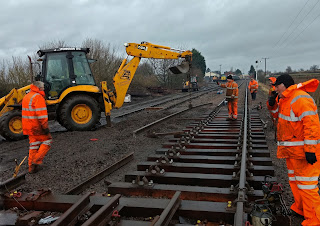 This is the rail in front of Neil which he will drill, as it has been cut to size, so there are no fishplate holes at the cut end. A second rail is already being swung into position. 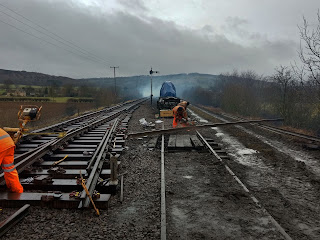 Here you can see a third rail being cut, and this one is for the curved road, which is missing a closure rail and a stock rail.

The smoke in the background is the clearance gang. Last week the smoke headed for Didbrook; this week it headed straight for - us! (cough) 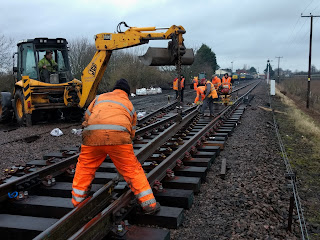 Here's the closure rail being laid in. This one is the trickiest of them all, as it is on a curve and a rail in its rest state likes to be straight. You also have to allow for the curve when measuring up.

Oh yes, measuring up is very important when cutting a closure rail... 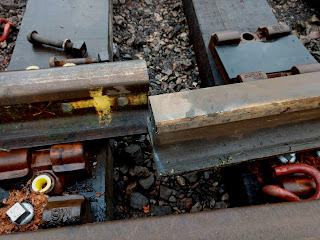 ... because this one didn't fit. Or seemed not to. There was a half inch overlap. Blame the cutter. Or the measurer. Or someone. Please.

All part of the plan, we were reassured, once we introduce the curve it will pull back and fit. 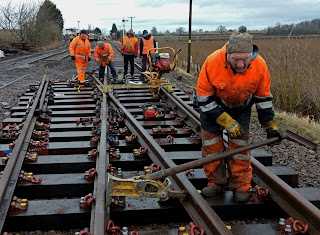 The Duff jack (we have a new student volunteer called Jack and got a lot of mileage out of that) will soon push a curve into it. However, it must be straight at the fishplates. 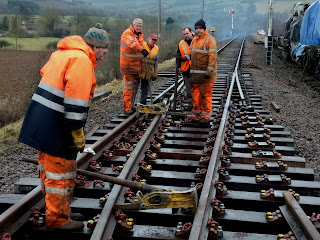 At the other end a second Duff jack was installed to push the opposite way.

See, that will make it curve. Now it will fit. 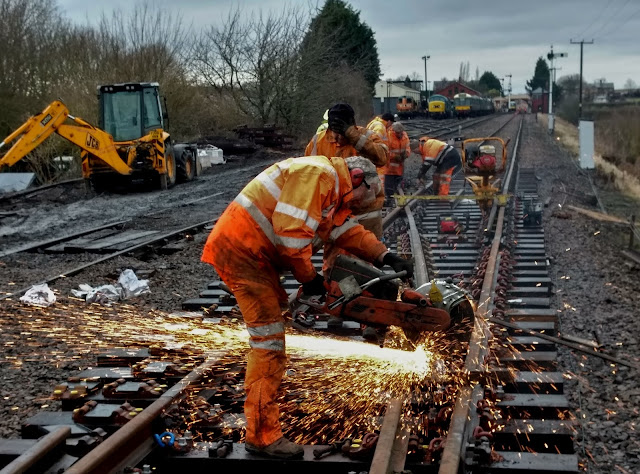 Alas - it still didn't. It is hard though guessing exactly the amount of compensation to allow when measuring the length in a curve. We resorted to Chris to taking a tiny slice off the end. 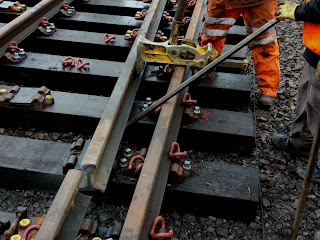 Then it fitted. It just needed a little 'Duff' help and a jerk on the bar to get it in. Then it was 'fly fished' (bit of jargon here, it's a fish plate bolted just on one side to hold the next rail in place) and the base plates drilled, bolted down and clipped up. Job done, the through road is ready in raw form. 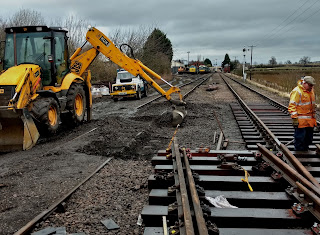 Meanwhile, Steve is already thinking ahead.

Here he is making a start on digging out the area of the short panel of track between the two turnouts we are building here. 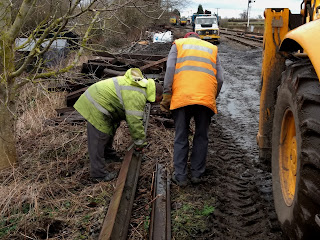 With Ivor he also measured up the other lengths of FB rail we have on site with a rail gauge. This allows him to see what the wear is, and which piece could be best attached to the turnout so that a plain fishplate can be used. 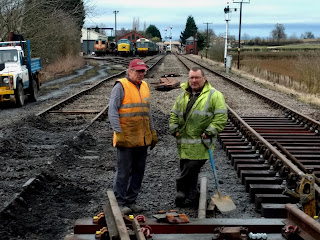 Afterwards these two experienced oldies did a traditional lean on the shovel to discuss what the youth of today is doing all wrong. Behind them the plain panel of track is all clipped up and ready to roll. 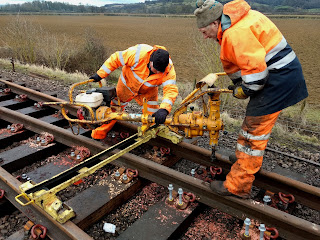 Neil and Steve L had the TB2 out to secure the bolts on the curved closure rail we fitted.

Does anyone know why it's called a TB2? What happened to TB1? The machine is actually a Geismar-Stumec, made in Alsace. It has a torque that is considerably higher than that of the portable 'animal'. 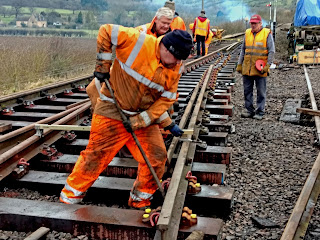 With the closure rail in, attention turned to the curved stock rails. In fact this one is fitted with check rails, so is straight as it passes the crossing. But the far end will need a bit of curving to align with the stub of the switch in the distance. 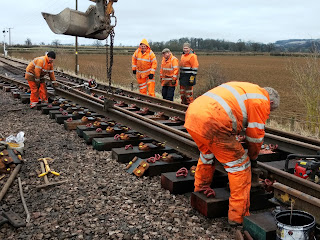 The plain curved stock rail was also measured up and laid in, Chris here inching it towards the stub of the switch, until there is an equal 1/4 inch gap at each end. Rest assured, we only cut this one once!

By this time the temperature had recovered considerably, from +2 and a high wind in the morning, to +7 and little if any wind at all. It became almost pleasant. But light was beginning to fade, and with this last stock rail we felt we had achieved something very satisfying - the assembly of the main line turnout. 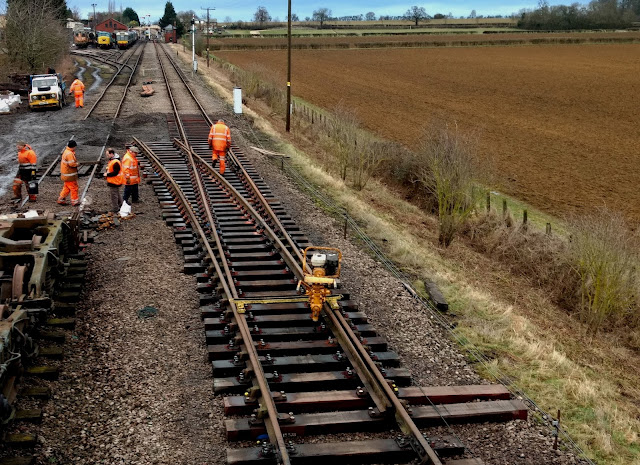 Here's the view from above at the end of the day. The complete turnout is in, as well as the section of plain track just beyond. The curve points tantalisingly towards the next job on the left.

Isn't it brilliant how this small plucky gang can lay an extension to Broadway on time, and turn round a week later and get stuck in straight away with the major winter maintenance job? 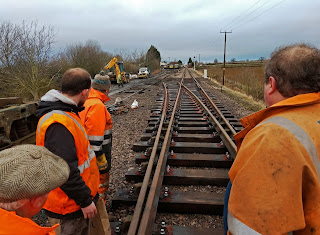 At the end of the day the gang enjoy the sight of the assembly job complete - we built this!

It isn't completely finished of course, there is some more bolting down to do, a smaller base plate has to be found where the standard one didn't fit, the stretcher bars have to be fitted, but it looks the part now. 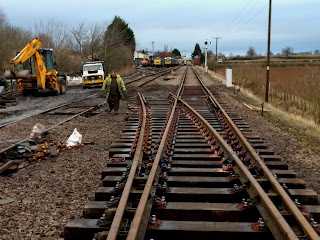 Next week we finish off those odd jobs, while a start will be made on the second turnout behind Steve here. The plain track there has to be dismantled and the bed dug out.

Can we have some fairer weather next week, for once? Your blogger's woodburner is not keeping up with the drying out of the sodden leather gloves.... 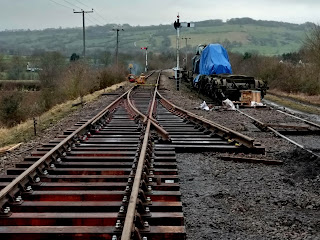 A last look here, from the other direction. Note the height difference between the main line and  the siding beyond. That will be interesting to deal with. 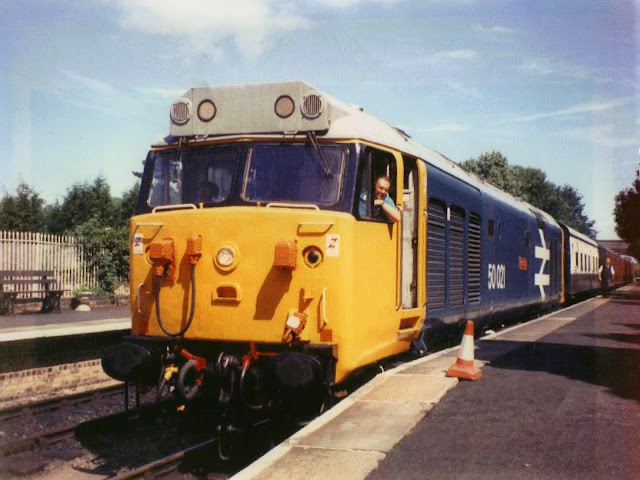 Here he is at the controls of 50021 Rodney, on the 10th of July 1994. Ivor was one of a small number of people passed out to drive the class 50. Wouldn't it be nice to have one based on the railway now?