Making a fine point of it

We turned up at Toddington today and screeched to a stop at the top of the drive - it was full up with parked cars! What's going on? 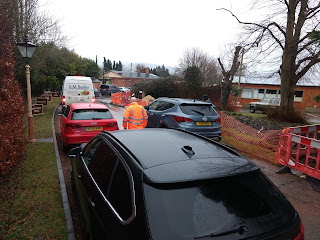 It was just one and a half degrees outside, and raining, so the temptation to get out of the car was not great. But why this traffic jam? 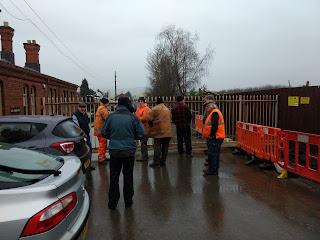 It turned out that the gate was jammed shut. It is a moody thing, as this is not the first time, and the combined knowledge of the people in the picture was not enough to make it change its mind. That was reserved for our office manager, bless her. It obviously needed more charm applied to it than we could muster.

Today was the fifth consecutive PWay working day that it rained, but at least it wasn't snowing and we could see the ground. There were just 11 of us, after two last minute cancellations. Probably looked out of the window from their beds! 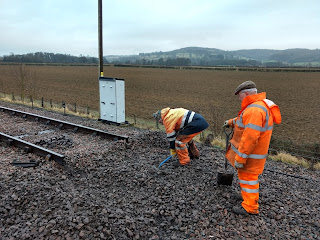 A good way to warm up is to shovel some ballast, and three of us decided to give the ballast bed on the plain track here a bit of a scrape by hand. It certainly warmed us up, but in the end it turned out to be futile as the whole 20m length needed lowering, which was too much for manual labour. We had counted on the presence of the JCB to lift in rail and scrape this trackbed, but to our great disappointment Stevie called in sick. We would have to cope without him. Evil tongues suggested that he became unwell at the sight of his bar bill; kinder ones felt that he had succumbed to the lurgi that many of us have had since Christmas. It is very common. 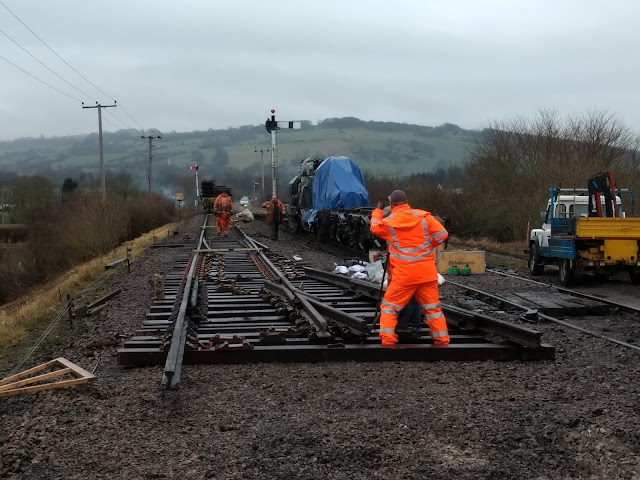 Last week saw much of this new turnout laid out, but not actually bolted down. That was to become the main job today, in the absence of Steve. To boot, we missed the services of our regular Telehandler driver, who being also a board director, found himself in a day long meeting today. Nigel therefore had to drive, as well has shout out orders, which is a bit hard if you are in a nice warm cab with the heating on and the windows shut.

In this picture Bert Ferrule is lining up the crossing itself, while Tim is barring it this way and that until it is acceptably straight, ready for drilling the sleepers. 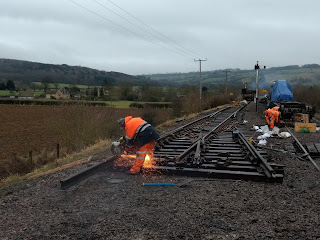 The long timber across the end marks the northern extremity of the turnout, so beyond this plain track starts, with bullhead rail on the left instead of flatbottom. We need to equalise the lengths of the rails, which is why Steve L here is cutting the end to size.

Only 2 people visible too. The others were all in  a huddle behind the camerman. 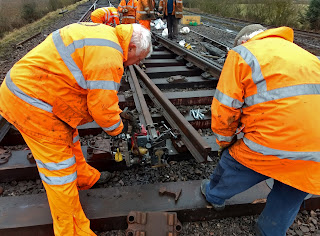 After cutting the LH rail to length on the through road, we drilled the RH rail ready to accept the next stretch, that length of plain track. It's already had a bit lopped off, as you can see in the foreground. Neil does the honours. He was fresh on site today, after several weeks in Oz. Let him to the hard work then. 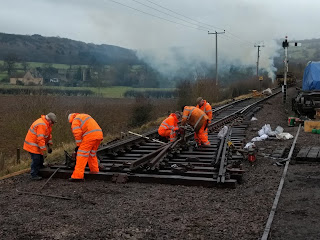 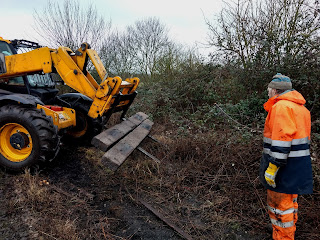 We had the idea of putting in the length of plain track today, if only to dispose of the chaired up sleepers still on the Warflats at the back. We need to empty those. But with the absence of Stevie we had to postpone this effort to next week, so the chaired up sleepers taken off the Warflat were stacked in the brambles next to the road.
Here Nigel is bringing in two older sleepers to act as bearers. 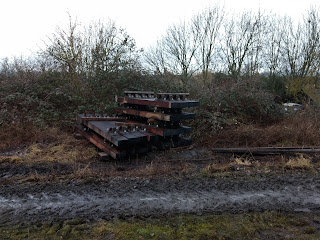 And there we go - one pile of sleepers ready to go in next week, and not in the way of anyone. 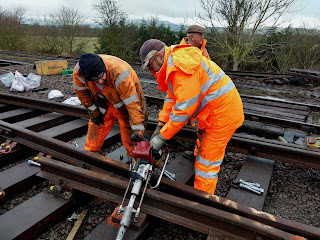 Time to start the second drill. Another machine with moody periods. Tim pulled and pulled at it in the cold, until it finally yielded and buzzed into life. It's a two stroke with a tiny engine on top. 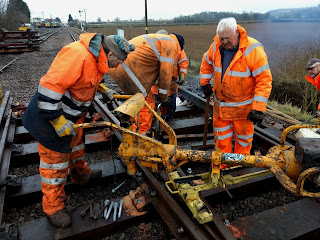 After a few holes had been drilled we started to put in the chair screws, and Steve L followed on behind with the big STUMEC chair screw machine. 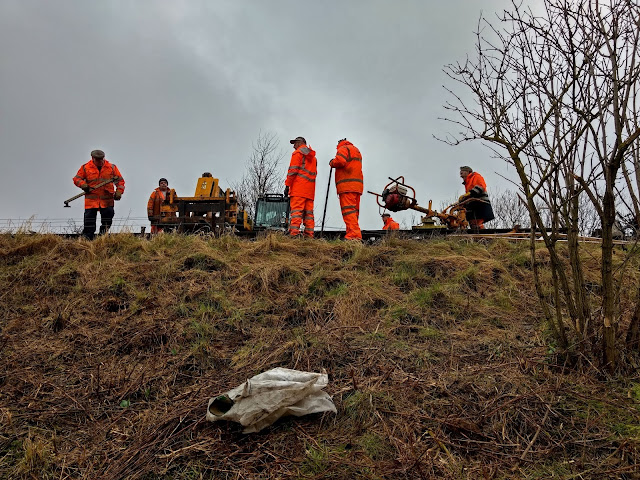 Once again we are on top of an embankment, but at least we have a beautiful view of Didbrook village and the Cotswolds near Hailes Abbey behind. A few desultory flakes of melting snow billowed around. 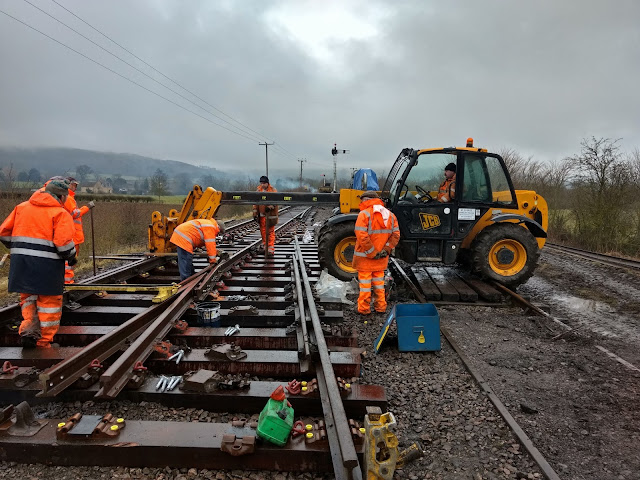 Without the help of the front and back ends of the JCB we had to be innovative, and here you can see the Telehandler being used to inch the rails around the crossing tiny distances this way and that. 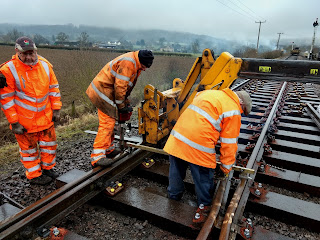 After each tug forwards or backwards Mike went in to check the gauge achieved. If correct, Bert Ferrule on the drill then sank the holes and the base plate in question was quickly secured in place. 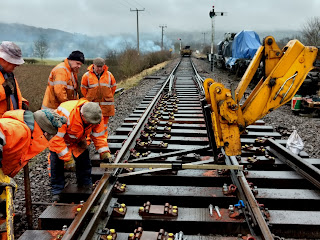 The area of the fishplate seemed to be tight of gauge, so here it was pushed out a tiny bit using the tips of the forks. Again Mike chcks the gauge until it is just right. 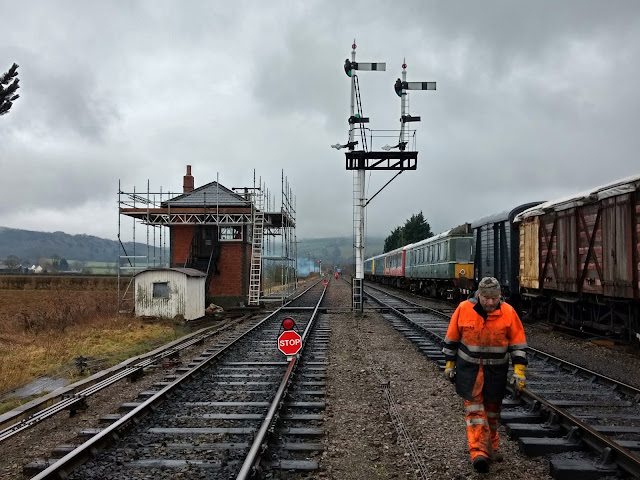 We had a late lunch today, but at least the mess coach is reasonably near, and it does you good to stretch the muscles a bit with a good walk. We passed the signal box, now with an impressive new roof. 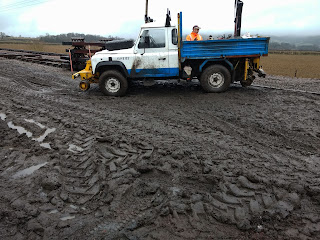 Aftre lunch it was back to work, but it was still raining steadily. This picture might give you an idea of the conditions underfoot. It's 4 inches of thick mud, interupted by the tracks of the Telehandler and Landrover which allow the rain to form into little puddles, until it is squelched out again by the next set of wheels. 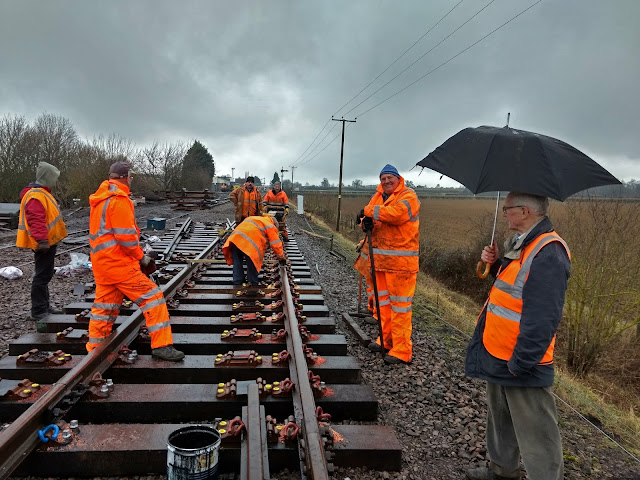 The only sensible person on site today was John, here passively regarding the activities in the February rain. He had his umbrella with him again, although it is no longer in the flower of its youth and is now less than perfectly round. It has a hard life with the PWay. 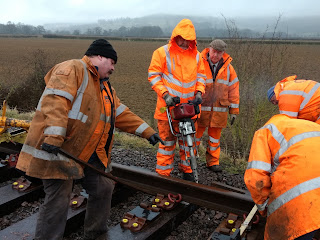 Towards the end of the afternoon we were almost there. The through road was nearing completion as far as bolting down was concerned.

Nigel here points out a ferrule that hasn't been drilled yet.

Tim had the best rainwear today, with an impressive tent around his head. Us others make do with flat caps and beanies. Simple is sometimes best, but not always waterproof. 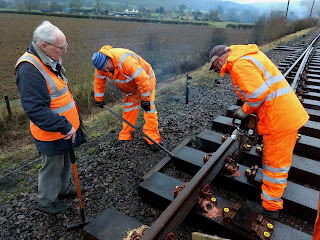 In a moment without rain John L waits patiently with the keying hammer for his moment to strike.

Neil bars up the timber, so that Tim can drill it straight. 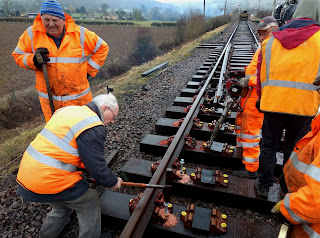 And then John L pounces ! The oiled up chair screw just inserted by Richard gets a whack on the head.

This makes sure that the STUMEC machine gets a good grip on it. Otherwise, if not exactly over its hole, the chairscrew can spin round and round, in defiance of the horsepower applied behind it. So John L and his umbrella play a key role. 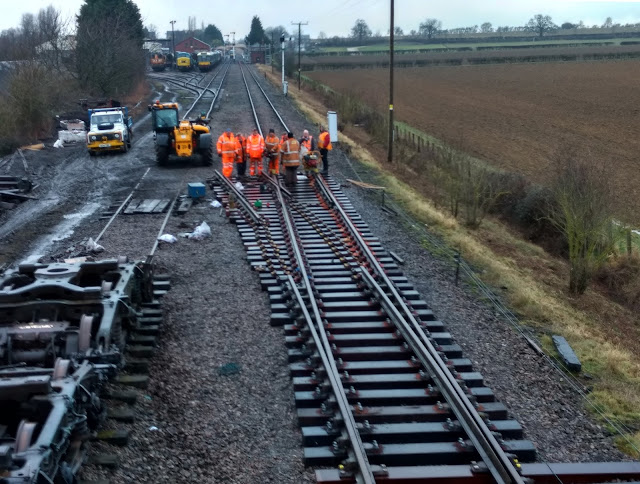 At the end of the afternoon, in the failing light, the remaining gang of only 9 men line up to inspect the job done today. The through road (straight ahead) is in and bolted down. With this in, trains could theoretically run, were it not for the panel of plain track still missing immediately behind the group of men.

Next week: We replace the panel of plain track, and lay in the two closure rails You can see where they might go, we did everything to ready for it, but without the JCB we couldn't complete the job.

There is a new post on the bridges blog, keeping you updated on the works at bridge 34 at Gotherington:
http://bridgestobroadway.blogspot.co.uk/2018/02/update-on-bridge-34-at-gotherington.html

The bridges blog link has now been restored to the company website.
Posted by Jo at 19:13