A blog entry for today, but no work !

It was a last minute decision, the Doodle was up and several had already registered, but late last night it became clear that we could not work today. 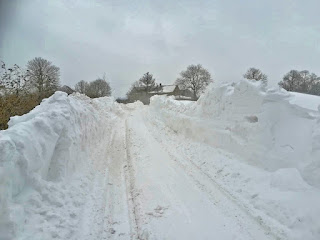 While the volume of snow fallen was not that great, it was the wind and the resulting snowdrifts that did it.

Here is a picture taken just 30 miles from Toddington, on the edge of the Golden Valley. Some of the snowdrifts were taller than the cameraman.


Some of the gang live as far out as Birmingham and Gloucester, so the decision was based on our inability to see the work site (what chairscrew?) and the low numbers registering, bearing in mind snowdrifts somewhere along their intended route. So today was cancelled. It was the first time ever in Nigel's long career with the GWSR. 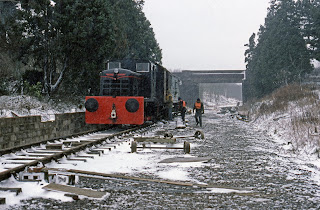 We're not afraid of snow, but you do have to see what you are doing. Here are some photographs taken by John Lees in March 1987, exactly the same time of year, but 31 years ago. 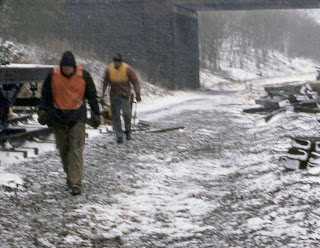 It must have been cold then, just look at how hunched up they are, leaning into the icy northerly wind as it blows down the cutting at Winchcombe.

Our clothing is so much better now.

Although... on Wednesday, the day of the snowstorm, a contractor working at Broadway was seen  - in shorts ! Must have been a postman, moonlighting. 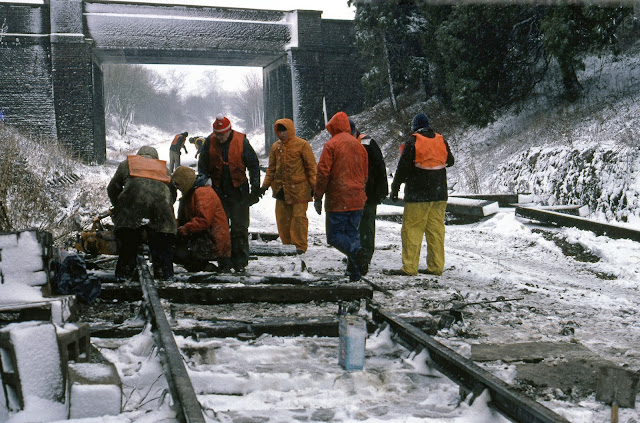 Here the 1987 gang is seen at the southern end of the first track laid into Winchcombe station, prior to opening of course, cutting a rail to length before construction of the loop turnout is started. Later this turnout was moved further south, and then again last year further south still, almost out of sight round the curve in the background. That's the sort of railway we are, getting bigger and more professional all the time. 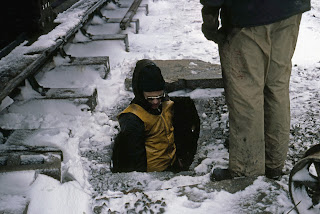 While waiting for the rail saw to do its job, what better use of your time than to climb down into a catch pit to clear out the inevitable rubble down the bottom of it?

These pits, built out of a kit of concrete rings, have a sump at the bottom that is exactly as deep as the top of your wellingtons. Stand still, and you are fine, move a muscle, and they fill with icy water. 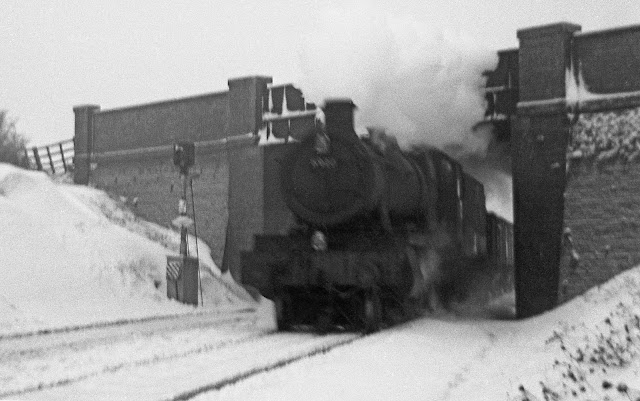 To finish with today, here is a magnificent photograph taken by George Bryant (he of S&T gang fame) on 5th January 1963. The conditions look similar to ours yesterday, with snow wind blown this way and that, clinging to the icy steelwork of the bridge.
The loco is 6920 Barningham Hall, bursting out from under Springfield Lane bridge just north of Broadway and heading north with an empty mineral freight train.

How do we know all this, from a smudgy number plate? 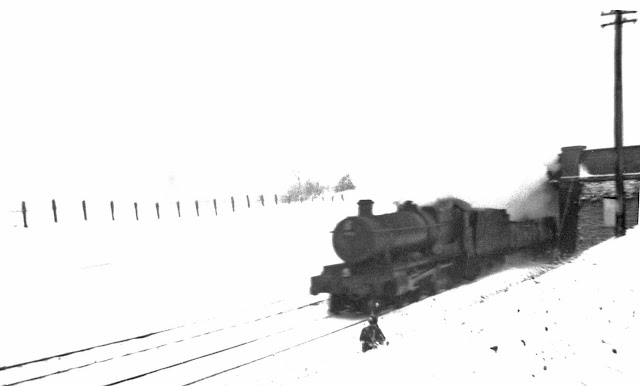 Yes, because here is the same moment captured by fellow photographer Brian Parsons sitting a little higher. George is the figure out in front. The telegraph pole tells us that this was the up side, and Brian noted down the number and date.

A moment in time, frozen.

And so were we.