A lusty 18 of us gathered in the mess coach today, keen to get to work (after tea and chocolate chip biscuits of course) until we saw outside - it was pouring, and only 4 degrees. Yuk ! 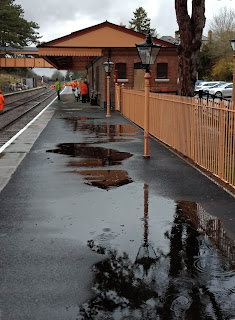 Nevertheless, duty calls. We pulled our collars up and hats down, and descended into the gloom.

We split into two main gangs;

- A track clearance gang, picking up the remains of what it took to lay the extension, and

- a gang laying in the northern barrow crossing, with a little ballast shovelling on the side, to keep warm.

At Broadway, the rain was not so bad, as you can see from this photograph. 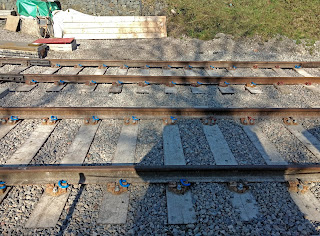 The barrow crossing had a complication attached to it. The sleepers on the two running lines have to be in line for the pads to fit properly. Ours weren't, in fact they were almost perfectly staggered, and deeply burried in ballast. 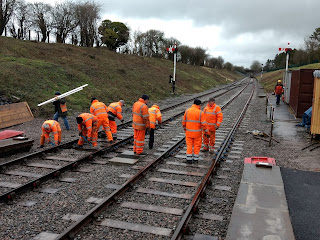 The first job therefore, still in the rain, was to dig out 5 of the sleepers and move them all along a few inches. 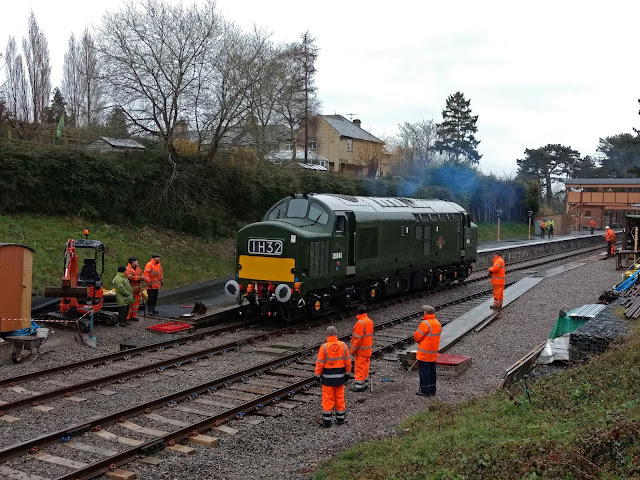 Much to our relief after a while of hard shovelling out the cribs, a large class 37 trundled through the station, right over our work site. We let it drive through, as it was bigger than we were. 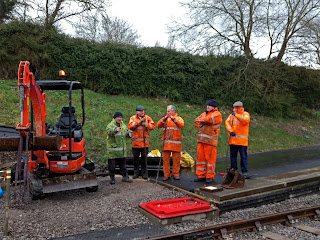 Then rescue arrived in the form of Stevie, with a hired in mini - mini digger. It was so small that it had no sides, just a little roof, which wasn't much use to him. Stevie reassured us that he would get just as wet as we were, and then explained to us how this was all going to work. 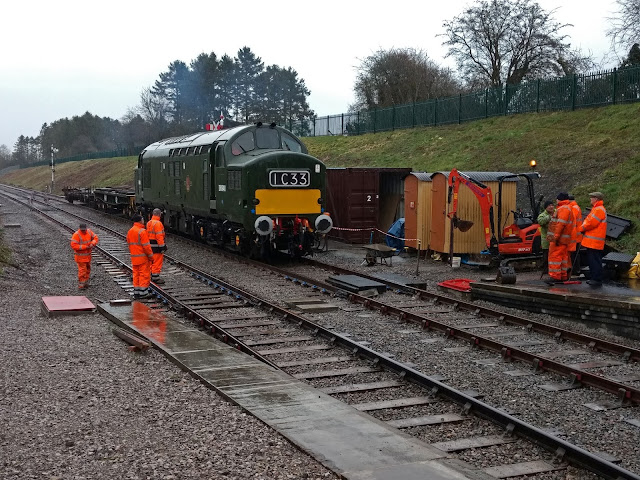 We laid in a pad-and-a-half, then stopped again as that diesel was back, this time with two bogie flats in tow. In fact this was the clearance train, and a Telehandler was waiting for it at Broadway south, ready to follow it down the line and load up concrete sleepers in little piles here and there. 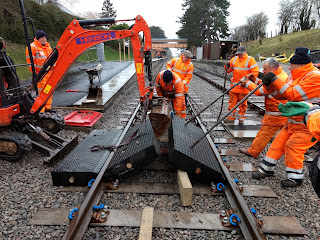 Once the line was clear again we dropped in the first two rubber pads into the middle of the down line. It's a tricky operation, you have to form a sort of house of cards with them, then slowly drop them down together, until they click in between the rails. A clever system. The bosses on the ends are for a second row of pads, if required. 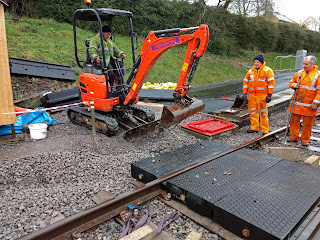 Stevie then pushed some ballast against the end, so that the first, outside, pad stayed in place. 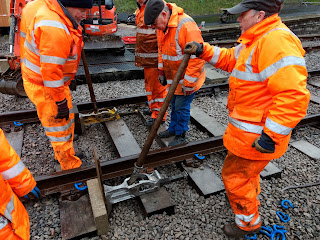 With the down line in, we looked at the up line, where the sleepers were in the wrong place. Stevie had a small bucket with him, which he used to scoop out some of the ballast in the cribs. This enabled us to push the sleepers along a bit using a pair of jacks. Coordinated jacking, some might call this. 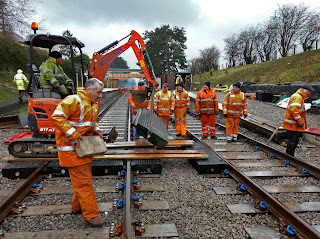 With the up line sleepers pushed into their correct places, Steve went to get the next pad. Rob has picked up a concrete block which will be used to prop it up at 45 degrees. 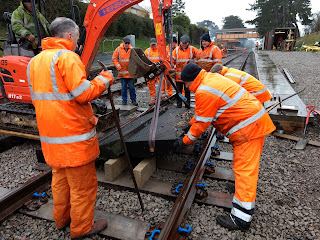 Using the concrete blocks in the middle for temporary support, the second of the two middle pads is dropped in. A ledge on it locks into the web of the rail, and its weight, pushing against the other pad, keeps the whole thing locked in. 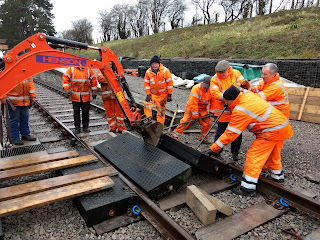 While Steve slowly let down one side with the bucket of the mini-mini digger, four of us with bars slowly let down the other side in unison. The concrete blocks were quickly pulled out first.


We felt pretty chuffed, as in just a morning we had done 7 out of the 8 pads already. Time for lunch at Toddington then. Wonder if there are any doughnuts left? 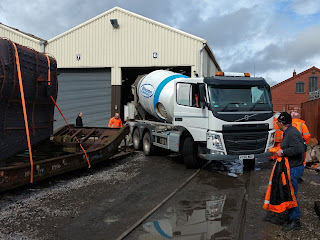 Here we were met by an enormous concrete lorry, which was gingerly reversing into the area in front of the loco shed. It had three rear axles, the last one being a steering axle, and this allowed it to manoeuvre in such a tight space. 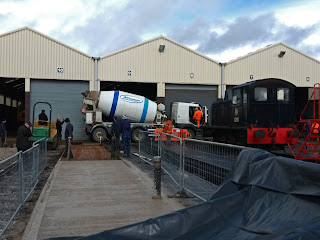 The job it came to do was to fill the last void on the concrete apron outside the steam loco shed. It was the area between roads 9 (steam) and 10 (diesel), and a dumper assisted with bringing the concrete down to where it was actually needed. No more stumbling over ballast now while servicing the kettles outside the shed, another good improvement on the railway. 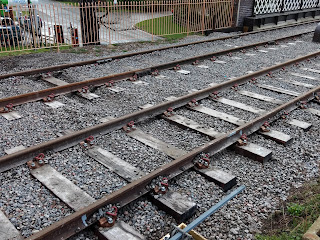 While walking back we came across another small job done by our gang today - digging out a crib on the up line just before the bridge, and moving a sleeper along a bit. This was to allow S&T to run their channel rodding across to the other side in a straight line. We aim to please. 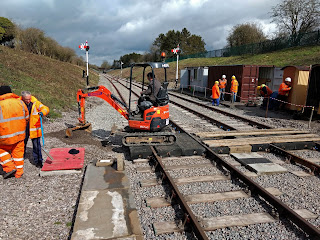 Further along, all change. The sun was out, Steve had shed his jacket - a sure sign of spring, the last pad was in, and Steve was busy pulling some spare ballast together to make a smooth approach to the barrow crossing on the other side. 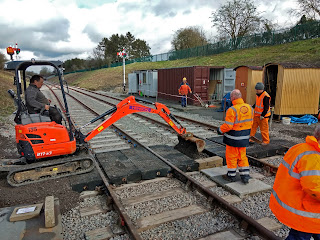 At the same time he grabbed some spare balllast and dropped it into a box in the middle. There is no rubber pad for the middle bit, as that gap can vary, so you fill it in with your own means. 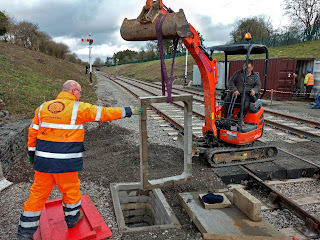 While on the job, Steve decided to take one ring off the platfom end catch pit, as that pit came out a bit high. 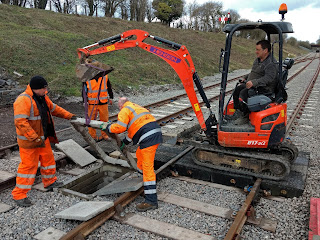 On the other hand, just such a ring was needed in the centre catch pit, which was a bit low, so we were able to kill two birds with one stone. 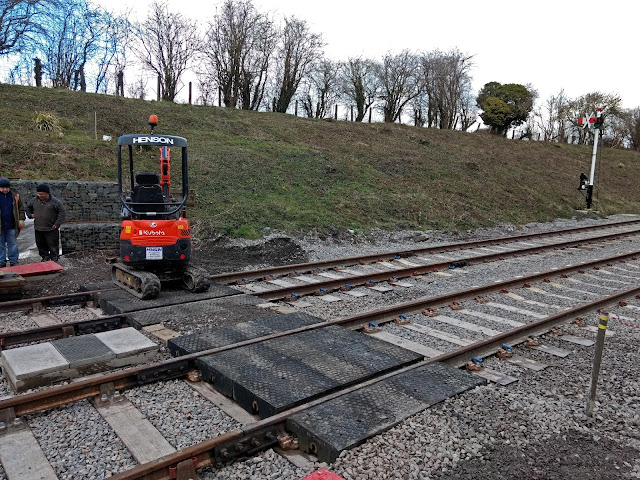 And here is the finished job:  One barrow crossing, if you please.

The one at the southern end is not going in for a while yet though. 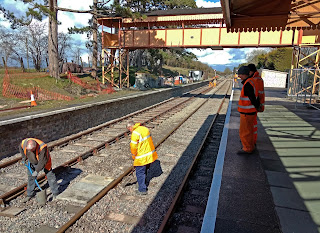 During the day 4 other gang members kept warm by shovelling ballast in between the platforms, from where there was too much to where there wasn't quite enough. It's an amusing activity to watch, particularly if you have finished your job, and they haven't finished their job yet. 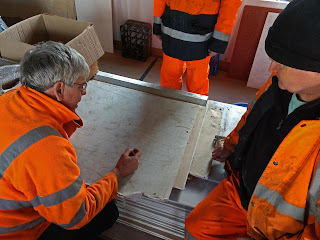 We also had a good look round the now all but completed station. Some of us (who had been away for a few weeks on holiday for example) were amazed by the speed of progress, and had never been inside the cafe before, which was judged to be quite roomy. All the scaffolding planks had just been taken out of it, and now it was light and airy.

Neal is always happy to explain things, and here can be seen drawing an impromptu layout of the canopy-bridge steps interchange planned for the northern end of the building. 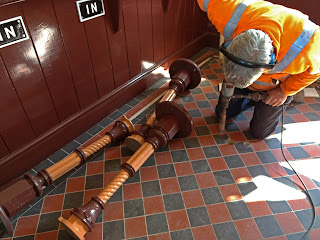 On Monday Neal could be seen drilling holes in the Booking Office floor to take the bolts that hold down the disks underneath the crowd barrier columns. This was a tough job, as the tiles on the floor are very hard indeed, even for a diamond tipped drill. He got there in the end though, and now the barriers are bolted down securely, ready to steady those unruly crowds. 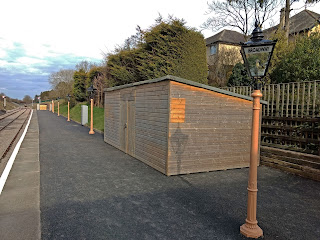 The platform now has the shed re-erected on it. 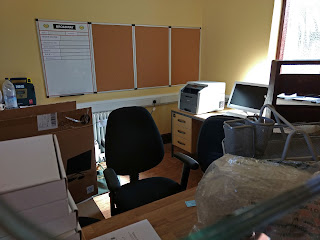 The ticket office has all new furniture and fittings. This is the view a passenger has when buying a ticket. 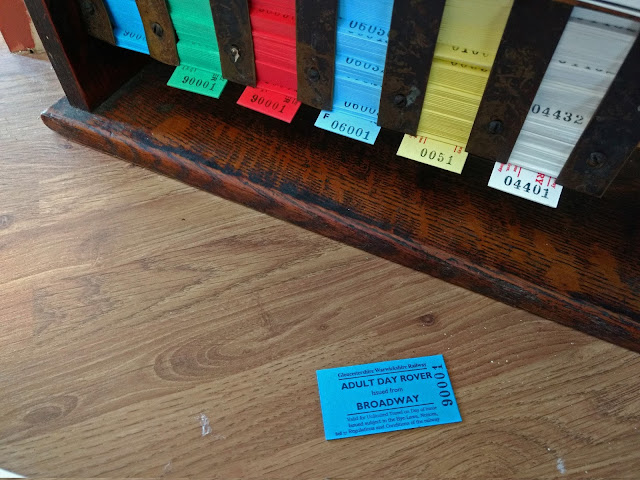 And this is the ticket he might buy - number 90001. It's the first ever ticket with BROADWAY on it. In fact all the bottom tickets, as yet unsold, in each row have No.1 on them. 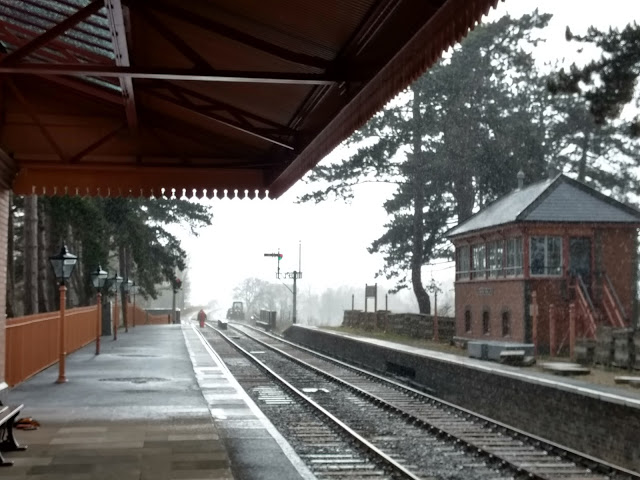 When the furious hailstorm has run its course. One plucky member of the PWay gang is out there though, unfazed.
Posted by Jo at 18:30