Race week ! Didn't we know it too. A delivery of a lamp hut from a garden to CRC cancelled because of traffic, two steam hauled trains in the platforms at Toddington, and lots of well dressed folk descending from buses in our car park. Very smart they looked, and determined to enjoy their day. We will certainly give them a brilliant start.

After tea, our first job was to lift the nut runner into the back of the Landie from the new Toddington south turnout. Punishment for the easy times with tea and doughnuts. We crossed a member of the loco department bearing - a tray of mugs of tea! Great minds clearly think alike.

As the Landie sped off to Broadway with its prize, we took a coupe of photographs of the locos getting ready for the race trains. It's really quite an event. 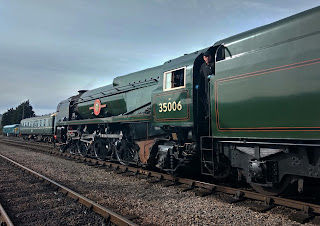 Dinmore came in and dragged Foremarke Hall past the mess coach (craning necks...) and then it was P&O, also in steam, that came out of its stable. We got a wave from John in the cab here, before it moved off to the yard throat. What a great machine. 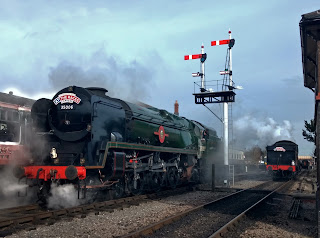 It's a bit unusual to see two locos, both with At The Races headboards together in one picture, but here they are by the signal box.

Dinmore was coming, and P&O was going. 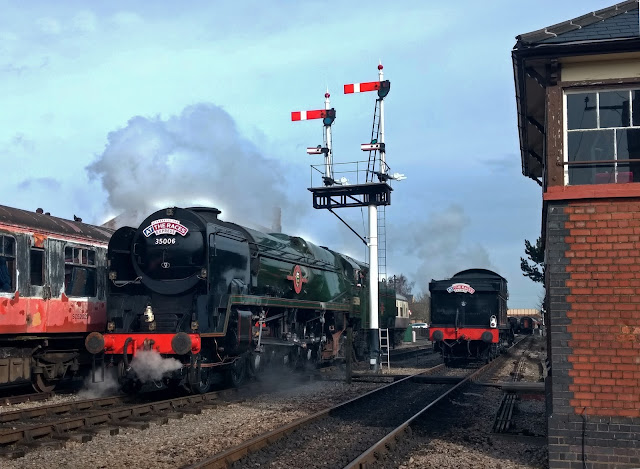 I guess this is what we volunteer for, just look at these magnificent beasties. 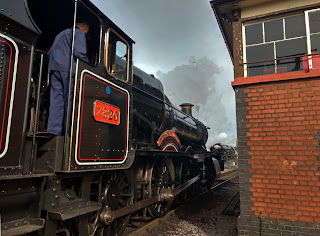 Here's Dinmore Manor up close with Toddington Signal box. They look rather good in BR black. (ouch - who threw that stone?) 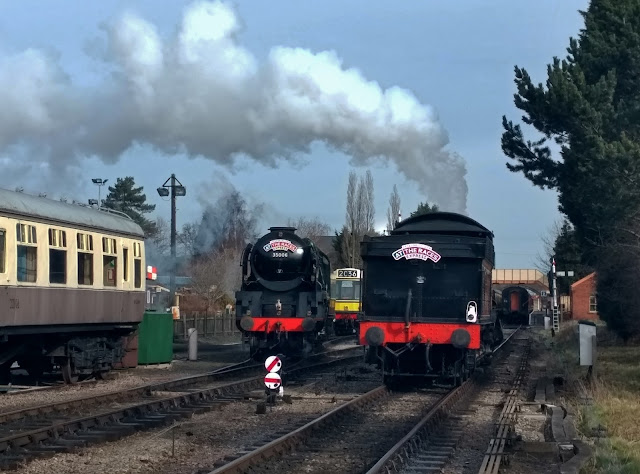 Here are the two At The Races locos, with Dinmore moving up to its train and P&O near the coaling area for a few extra bucket loads. 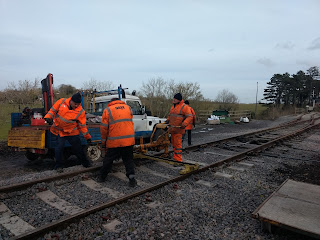 But enough of these distractions, there is hard, physical labour to do.
We are now at Broadway south, the Landie has arrived with its heavy load, and a smaller number of 4 men have dragged the nut runner off its deck and on to its carriage. Now to start it.

But it would not. We tried all combinations of choke, petrol and speed settings, but no joy. 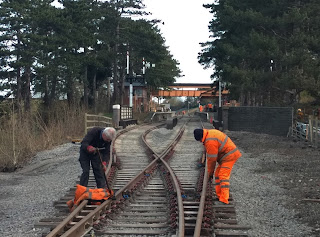 Only one thing for it then, we check the fishplate bolts by hand using large spanners (right) and pull in a few recalcitrant Pandrol clips (left). 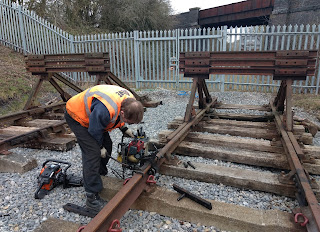 A small gang of two went all the way to the northern headshunt to put in 3 missing bolts. The second and third are being addressed here. They gave us endless trouble, it took most of the day to get them in, due to the big difference in the rails between the worn FB on the headshunt and the very ancient bullhead on the buffer stop. We did not want to pay for a special fishplate for this junction, so we winged it with an old bullhead one, and drilled a large hole for the final bolt to fit. That was the tricky bit. 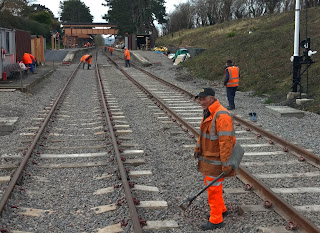 As soon as we took the fishplate with three bolts in it off to redrill the hole, the rail dropped by a couple of inches.
This meant that to refit the plate once the holes was enlarged we would need a jack, but there wasn't one at Broadway. Just our luck. 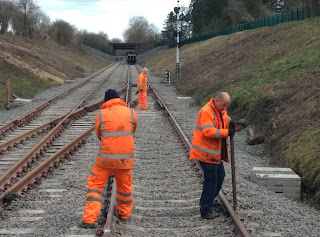 After giving Rick above some guidance on which way up to hold a shovel, we passed this gang of two still on fisplate bolt tightening and headed for the Landie to get the jack, combined, why not, with lunch in the mess van. 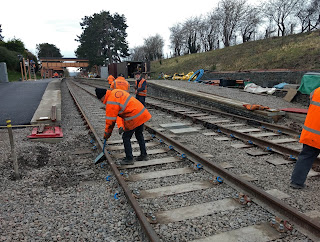 More of us were clearing a space here at Broadway north for the barrow crossing, which needs to sit on a stretch of track that is free of excess ballast.
The blue clips show where the barrow crossing will be located. The bits for it are already there, just off camera on the left. 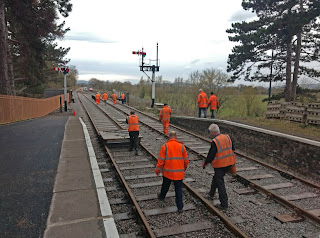 Although we protested that we were off to Toddy to get a jack, the others believed we were off to lunch and followed us. So OK, we were off for lunch. Might as well combine the pleasant with the useful. 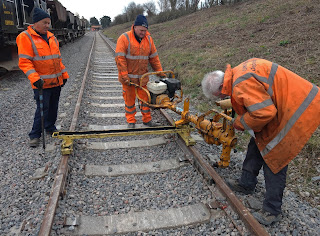 After lunch the TB2 nut runner was working. Congratulations to the unknown mechanic that got it working, but there it was, on the job. That shortened the time taken considerably, and all the fishplate bolts in the area had that extra turn done to them. 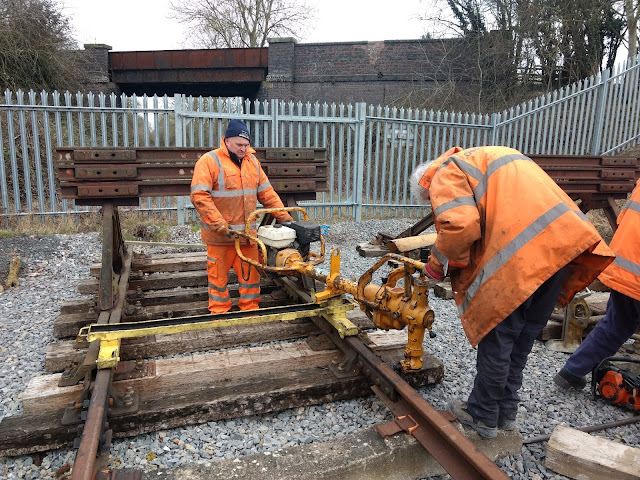 The TB2 machine came right up to the buffer stops at the end of the P2 siding. This machine can do up fishplate bolts with a good helping of useful torque, and it can also do chairscrews. Having found a few of these that the portable 'animal' didn't manage to drive all the way home, we also ticked that job off the list. 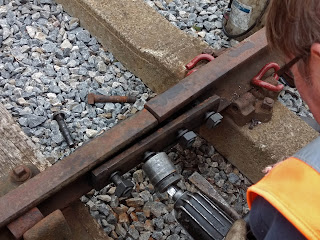 At the end of the day we were finally, finally able to insert the fourth bolt on the two fishplates by the buffer stop. What a lot of effort that went into two small bolts. 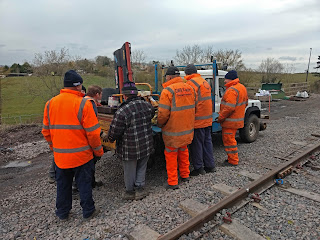 We pushed the trolley and the nut runner all the way back to the Landie, where a tired but happy gang managed to heave it back on board.

While the Landie returned to Toddington, we had a quick look at Broadway station to see progress. 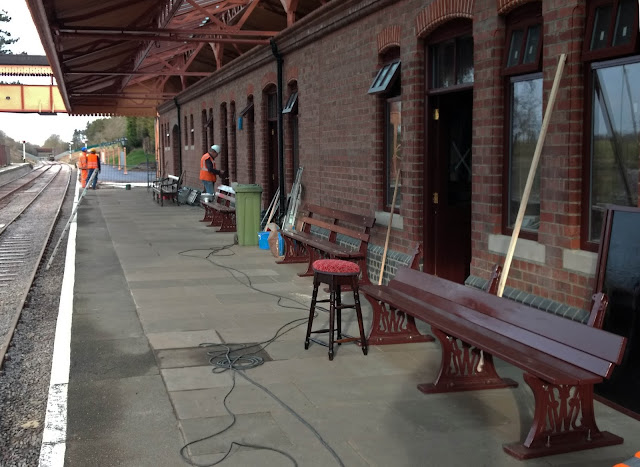 All 4 platform benches are now visible in this picture. The 100 year old GWR wooden bench has come up from Winchcombe after an expert resuscitation by the brilliant C&W carpenters, and in this picture it is parked in the dry at the far end. Note that it must not be moved by carrying it with the arms, as they will get pulled off. Wise words from friends at the SVR, who sold the precious veteran to us as a wreck.
The centre two scripted benches are now fully assembled, while the third one in the foreground is still a work in progress.

The 1904 picture below shows a bench the same as the one repaired by C&W under the P2 canopy at Broadway. 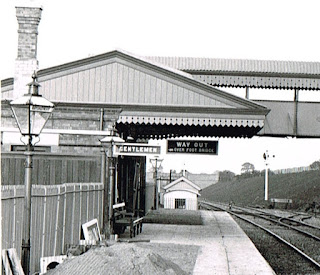 Note also the lanterns on the lamp posts are edge on to the platform, in response to some that wonder why we do this. 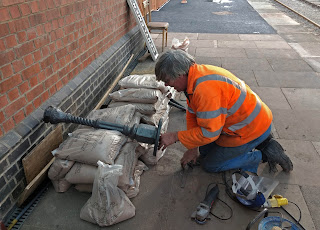 Our last picture shows Neal fettling one of the 4 crowd barrier posts that will stand in the booking office. The replica casting required a lot of his metal working skills, as it did not possess the stabilising ring at the bottom that it should have, and so we had 4 of them made separately out of mild steel.
Neal here smoothed off the surfaces to be mated, and then bolted the disk on from underneath. His left hand hides a steel shaft that will be resin bonded into holes already drilled into the booking office floor. Finally the steel disk will also have 3 bolts of its own, so the whole structure will resist the push from the crowds to buy our tickets.
The posts will be painted in alternating layers of dark brown and light stone, to highlight the details. The tops of two will be joined by a special replica wooden bar made for us by - the carpenters at C&W. Aren't they just masters of their craft?