We reach the station building

Well, that headline says it all! It took a lot of effort to get there though.

First though, some earlier work. 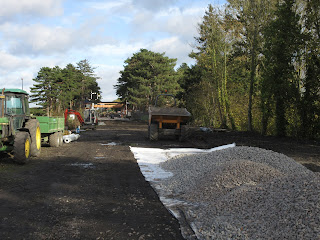 Over the last two days the ballasting has reached the approximate site of the southern turnout. You can see Broadway station just beyond. We don't want to put any more Terram and ballast down until we know which bit is double and which bit is single track. 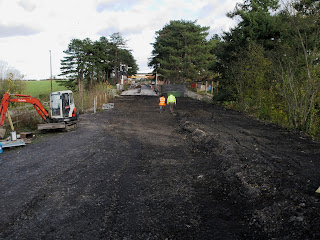 At the same time the fence and gate that used to close off access to Broadway station along the trackbed were taken out, and the trackbed here levelled as well. Now you can look right through, and see the ballast bed approaching from the northern direction. 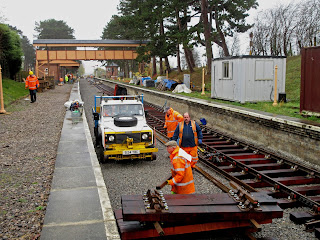 The forecast today was for a steady drizzle, perhaps fading out later. It was waterproof clothing for most of us. The job in hand was to extend the P1 road to catch up with the enthusiastic sleeper laying on the P2 road last Saturday. The Landie brought down the kit, which is always heavy and you don't want to carry it very far. 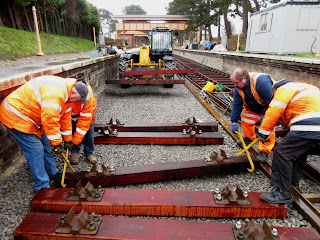 First thing to do was to lay out the pile that was on the end in the above picture. Using the nips, it takes 4 people to lift and move one of the Jarrah sleepers with cast iron chairs on.

Behind, the Telehandler hovers with another load already. 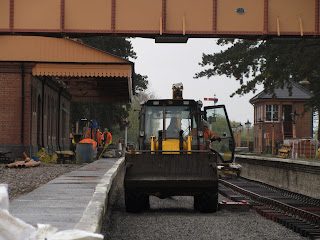 With the Telehandler off to fetch even more sleepers from the Childswickham train, Steve saw his chance and nipped in with a pair of rails.
This picture shows just how narrow the gap is between the side of the JCB and the platform, and the centre drain on the right. In fact, it seemed tighter on the platform 1 road, than the other. That was odd... 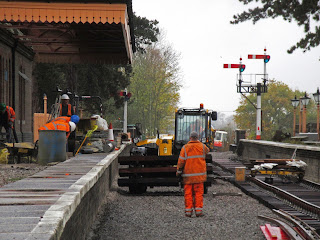 With a pair of rails dropped on the right, the Telehandler came back with a load of 12 sleepers. It too was having a hard time getting through without damage to the slabs. 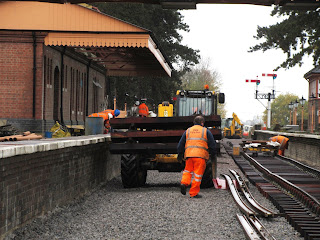 And there you go, it has nudged the centre drain, while the load is now even closer to the slabs. Which way to go? 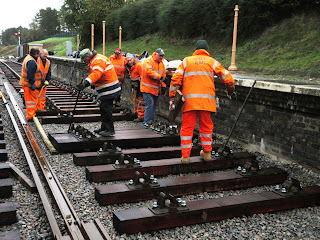 Behind the camera part of the team - it was a large turnout today, despite the rain - was busy spacing out the sleepers brought in. We had to adopt another method today, involving three drops of the 12, at intervals, then spreading them out once on the ground. The plank on the left was cut to length to let the Telehandler know where to drop each set of 4. 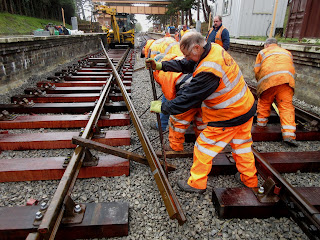 And then, finally, our first rail goes in. Whoo - hoo ! 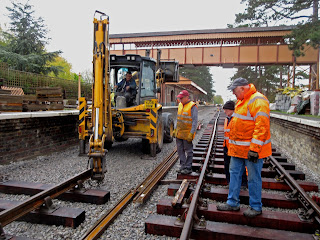 We can then take a breather while Steve nudges it home, up against the previous one.

We're almost under the footbridge here with double track now.


The further we went along into the platforms, the tighter the space became. Very odd. Whereas the P2 road fitted in with the space between catch pit and wall, the platform 1 road ended up much closer, and the sleepers wouldn't fit in. How is that possible?

Nigel was summoned to inspect the lack of space. In the foreground the opposite sleeper fits perfectly, why won't the P1 sleeper fit in? 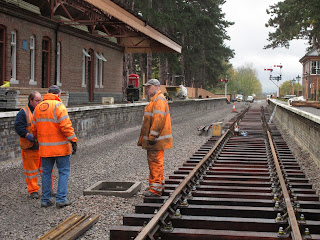 A hasty committee meeting was held. 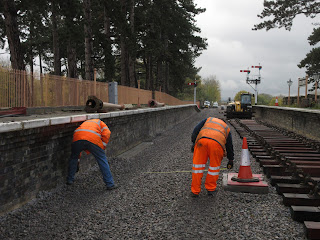 Followed by an official measuring of the distances.

Yep, it's true, one space is much smaller than the other, and that over the length of two catch pits, right opposite the building. 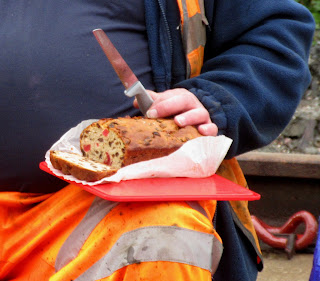 Let's have lunch and talk about it over some cake. Fruitcake today (no jokes, please, about what a suitable cake this is for our gang, thank you) and it was jolly good too, with brandy in it left over from the Christmas cake confection. Just our luck ! 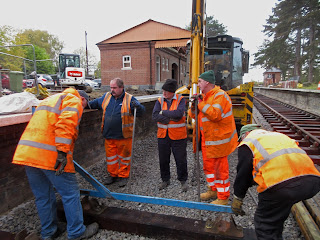 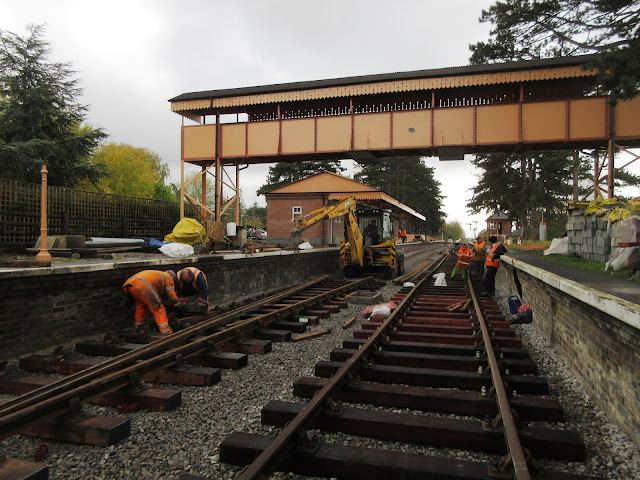 We then laid in a second set of rails, an event always anticipated with great pleasure by the sleeper laying gang on the right, because you can chill out and lean back for a few moments. Too dangerous to go nearer, see? Sorry. 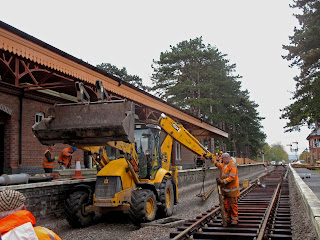 Steve brings in more rail and again a tight situation with that centre drain catch pit in front of the building. 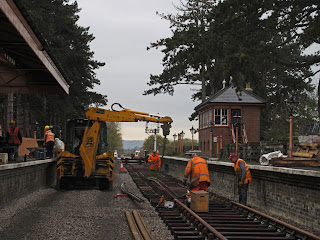 While waiting for more sleepers from afar, Steve an Bert Ferrule take a cheeky chance and quickly lay in a rail on the P2 road, where 3 lengths of sleepers are not yet adorned. 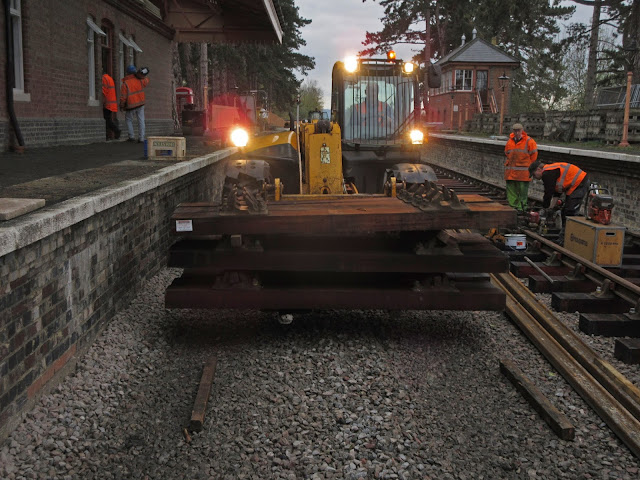 Here come the sleepers again! Another laod of 12, now with extra headlights in the descending gloom. 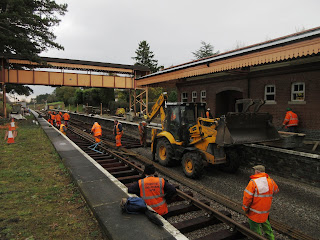 As the lighting conditions get fainter and fainter, the gang advances past the building, thus enabling today's headline. We reach the station building, with double track! 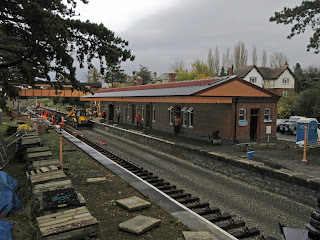 Taking a step back, we can see from the signal box steps how sleepers are laid out in the foreground, and the second track is at the level of the toilets in the background.
The building is now completely clear of scaffolding, what a treat it looks too. Under the canopy the platform is being brought up to slab laying level with dumper loads of spent ballast, originally scraped off the trackbed here, so now it's back home. 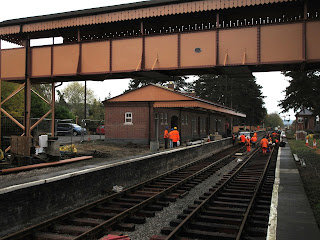 Towards the end of the day the laying team on the P1 road were mid-building. Double track is now in front of the station, and a number of people remarked how much like a station it now felt, with the rails in place. 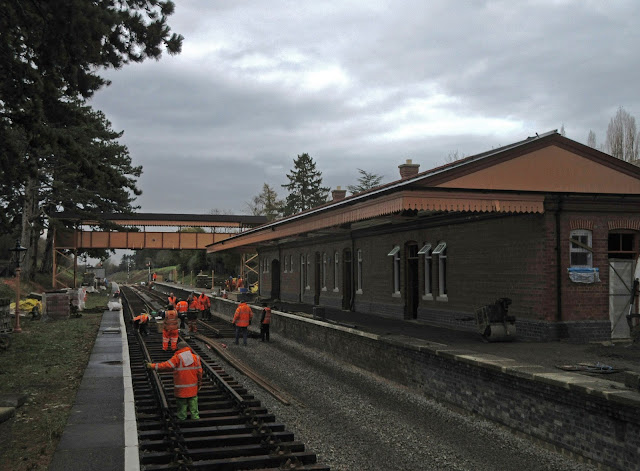 This is how far we got today, as the teams start to collect up the tools. With the extra 'cheeky' length put in on the up line, we are now this side of the buiding here, and half way along it on the down line. All in all we laid 120 sleepers today, and 6 pairs of rail. Next time, we might even be coming out of the platforms again.

The next PWay event will be on Wednesday, when the 'second front' will lay the remaining 100 concrete sleepers on the extension train. There may be a ballast drop too, this remains to be confirmed. 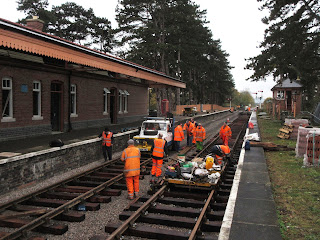 All the tools are now loaded, ready to go home again. A warm fire and a large beer is what we want now. Seen from this angle, the rails appear to have passed the building already. It all happened today, often watched by the Broadway station gang, who were also numerous on site. Altogether there must have been over 30 of us. We don't hang about, there is an opening day approaching! 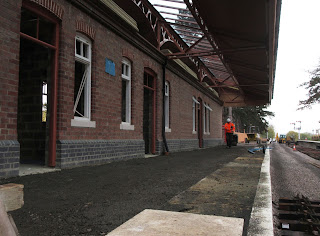 Look at this nice platform achieved by the Broadway gang today, with our trackbed scrapings. All nicely rolled too, and soon it will be ready for the 3x2 slabs that belong here. 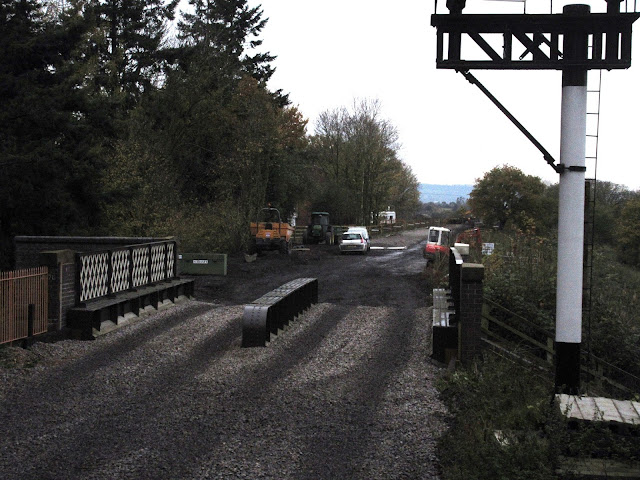 A last look south, this time from the platform end. You can see that the trackbed past the bridge is now completely clear, and not far beyond is the end of the ballast bed. Somewhere in between will be the southern turnout.