Three jobs today for our gang:

- Clipping up at Broadway, both rail heads
- Chairing up sleepers at Winchcombe
- Sweeping rail at Buckland in preparation for stressing, due some time in mid - December. 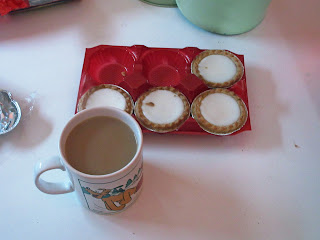 There was another job as well of course: find the mess coach! Once we overcame this hurdle, Paul awaited us with tea and a mince pie with icing on top. Life is good! 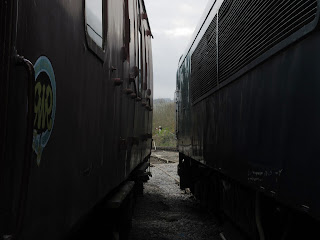 We found the mess coach hidden behind this Peak.
Sneaky, but we found you.

It's parked very close though. 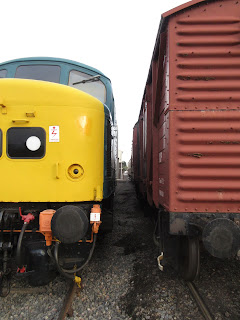 The next job, before we even started at Broadway, was to open the box van doors to get the tools out. Parking a 133 ton weight in front of the doors is a great way to stop theft.

H-o-w-e-v-e-r ...... how do we get in? A very thin PWay gang member (these are very few in number) had to slide in between Peak and van to hand out the brushes and tools that we needed at Buckland. 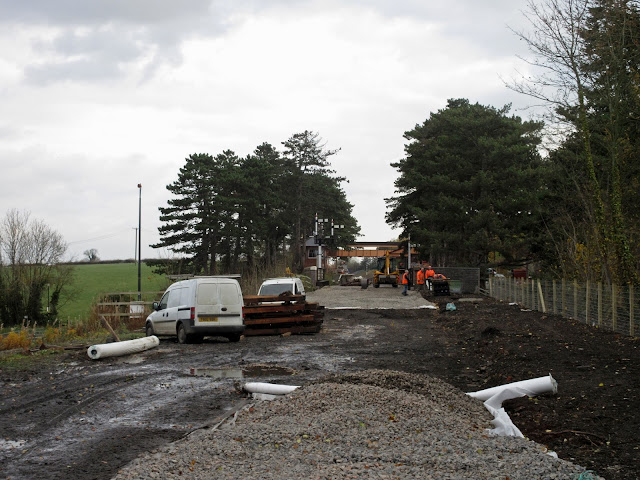 Then on to Broadway for clipping up. Saturday's somewhat moist laying marathon left several panels on both sides still requiring Panlock clips to secure the bullhead rail to the chairs.

A second group split off to do the stretch in front of the goods shed (one sleeper in 5, until the fishplates are on)

Over the last 2 days Steve and Adam have been busy, and the trackbed now ready for laying has been advanced over the bridge with Terram and fresh ballast. Just a few yards now separate the north and south ballast beds, and the gap is basically the site for the future southern turnout. 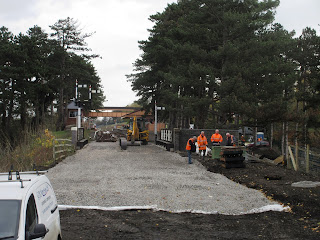 As we sorted out some clipping up tools Steve and Adam were still levelling off the ballast bed over the bridge. This area here is the end of the double track through the station, here fitted with Terram due to the slushy ground beneath. 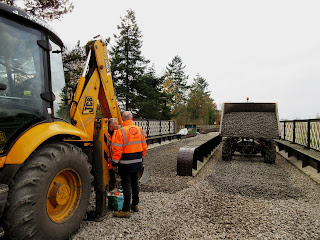 As we chatted with Steve for an update, Adam brought up a final load of ballast, which he spread out over the bridge. They spent the rest of the day moving infill around for the station site, and demolishing the concrete base of the bric-a-brac shed (whose temporary planning permission expires this year). 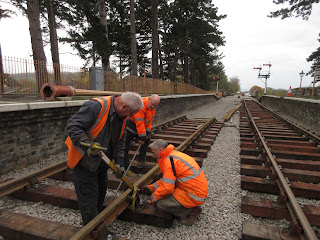 Here's the station gang clipping up. It's a slow job, as the ballast bed undulates very slightly, so some sleepers are lower than others and this makes it difficult to put the rail right down into the chair. There was lots of fiddling around with bars and fulcrums, and one of the Pan Pullers needs some work done on it as it is very loose, so kept slipping off the job. Luckily we had a second. 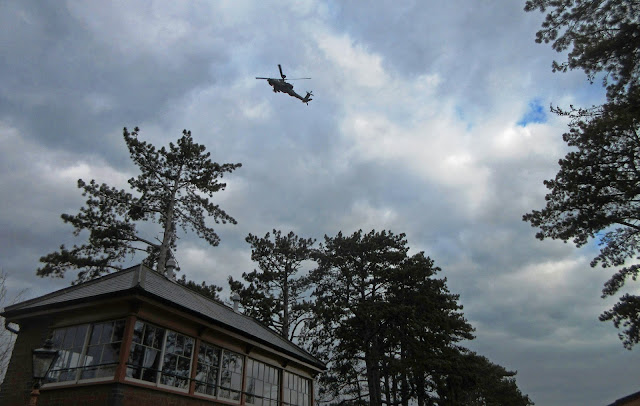 A passing Apache is always very exciting. You can hear its distinctive sound a few seconds before it appears, so giving time to whip out the camera and take a picture with the signal box on.

Ours are equipped with a 30mm canon - can you imagine a gun barrel of 30mm diameter? It seems huge. Those pods underneath also hold rockets, so better give them a friendly wave.

It was very windy today, so we were glad to get away from those breezy embankments and get back to the mess coach at Toddy for a nice cup of tea, and with luck, a warming meal from Paul.
The queue for the teapot formed quickly ...


Julian and Paul had the task of spooning out (forking?  - what is the verb for dishing out spaghetti?) the spag from a huge pot. We were 21 today, pretty much the maximum the mess coach can hold. What a popular gang we are, it must be the atmosphere.
Meatballs that came out of the oven were piled precariously high on a dish on top of the grill. Should one meatball accidentally fall, perhaps rolling under the stove and acquiring a few extra hairs, Maitre d' Paul declared it would be given to the last one through the door. That should teach them to report for lunch on time. You blogger's ears are still ringing from the painful tirade he received for being 10 minutes late last week. Ouch ! 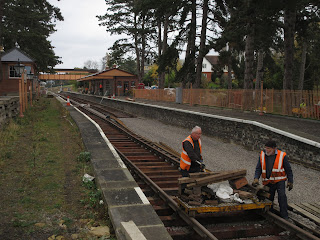 After lunch we completed the station clipping up, with the exception of the last panel, which was not yet fishplated up. We had a little tidy up too, finding a little stash of scrap and the omnipresent bearers for sleeper transport that we are forever collecting and sending back to base. It's a pretty relentless circle.

More concrete sleepers will be loaded in a week's time.

Julian also brought up a number of bags of Panlocks from a dumpy bag full on the other side of the bridge. That's 25Kg to carry over 100 yds each time, a bit like an episode of the strongest man. 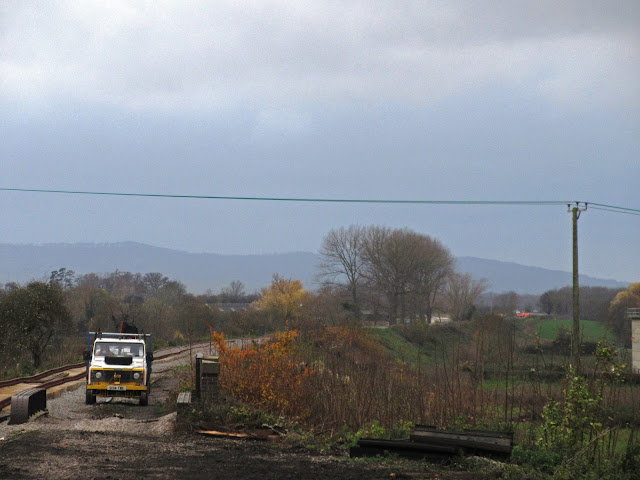 As we go to press news from the other two gangs is sketchy as yet. The little orange dots in the distance here are working between Little Buckland and Peasebrook, preparing the last 1000m stretch for stressing. There are 50 lengths of rail to clean with brushes, and equip with rollers and additional SHC clips ready for final clipping up after the stress. Today they did 4 panels, we learned. Let's hope we can do a big bash on this next Wednesday.
At Winchcombe the third gang was fitting the last of the Jarrah slepers with chairs and/or base plates, and were loading them on the train. The last turnout also has to come up, it's a lot of balls to keep up in the air to get the laying job finished by Christmas. 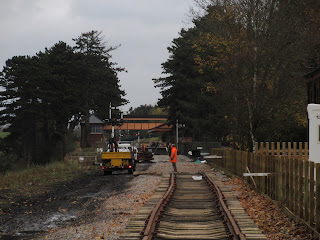 Here's a last view of the southern rail head by the goods shed. This was partially clipped up today, to keep everything in place.

A bit of Broadway history.

First of all, there has been a great response to the suggestion we put people's early GWSR pictures on the Flickr site. Four people have offered to put up a selection of their photographs, mostly seen from a PWay angle, which is what interests us here.

It takes a fair old while to scan a selection of photographs (it would be a huge job to do them all) and then treat each one with Photoshop to remove dirt and try to improve on the effects of age. The first portfolio has now been completed, and uploaded here:
https://www.flickr.com/photos/73536293@N02/albums/72157688389854161

Garry was head of PWay and also chairman of the company, so was able to photograph first hand a lot of what was going on. The comments are currently a bit sparse, so if you can think of more to add, please feel free to do this on the site.

The second offering today is, given that we are working at the goods shed, a couple of historical photographs of the same area, seen through the camera of Brian Parsons. Brian lived in Broadway, often photographed trains at the station, and loved the railway so much that he became a BR fireman at Worcester. A boyhood dream! When steam came to an end he became second man on diesel locos, and this is how the pictures below came about.

Thank you Brian for sharing these. 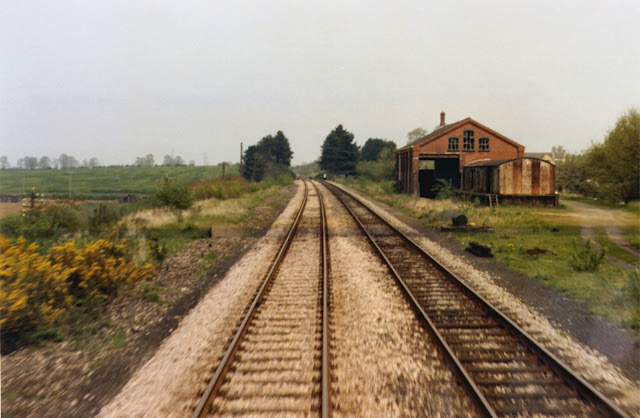 Here is Broadway goods shed, seen from the cab of a diesel loco on the up line, and taken in the summer of 1972. Note the fresh ballast and good state of the track. Broadway station was behind the pine trees in the distance. Note also how the embankment was wide enough for additional siding tracks left and right. This was a high speed main line. 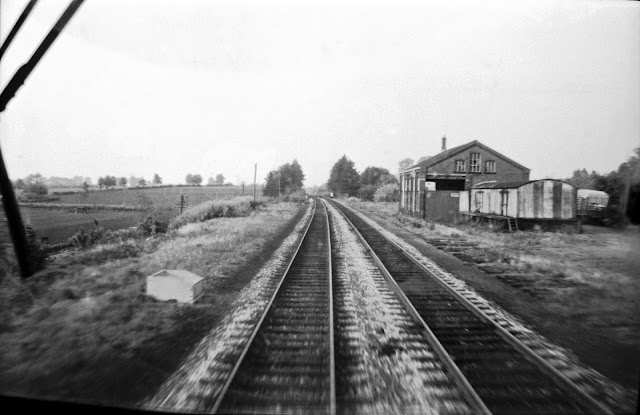 The same picture taken 4 years earlier. This time we know the number of the locomotive: D1749, a class 47 diesel.
Note the lorry on the far right, next to the corrugated iron fruit packing shed. Fruit packing still seems to be going on, although the goods sidings were lifted by then. Assembly of packing crates was also reported in that shed. It is the rubble of the base that we think we removed from the bund by the bridge. 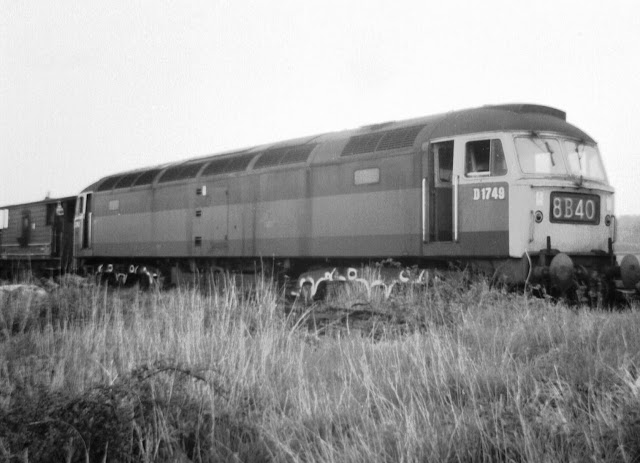 This was Brian's workhorse, D1749, here photographed at Toddington with a brake van. It seems to be parked in the yard, facing south - the Cotswolds edge is just visible in the background.