Along the goods shed

Wednesday's gang was out in force today, with a key question posed at the start of the day to sort out those not up to speed - where was the mess coach? 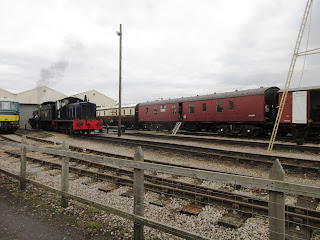 Anticipating eagerly our tea and biscuits this morning, and an invigorating pep talk from Dave, we screeched to a stop outside the mess coach - that wasn't the mess coach. It had transformed into a chocolate and cream Mk 1. Huh? A surprise repaint? An upgrade for the PWay gang?
No such luck. Our coach had been secretly moved to elsewhere.

Elsewhere turned out to be behind the loco shed. Fine for views of Dinmore being steamed up, not so good for walking the heavy lifting bar from the goods wagon over 4 tracks and a fence to find the nearest point where you could park the Landie.
Oh well. It's an innitiative test. 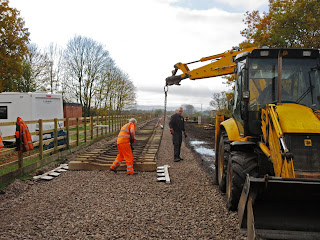 We heaved the lifting bar into the Landie, followed by a heavy basket full of its 8 chains. Then off to Broadway goods shed to allow the JCB to lift in the last 80 or so concrete sleepers on site. 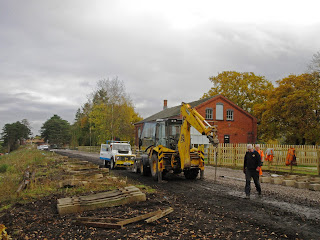 We were beaten to Broadway by Andy and Paul who, undeterred by an absent lifting bar, set out to lift in the 80 sleepers using just a simple chain, one at a time. They were well set when we arrived, having done almost half already.
No matter, take back the lifting bar, heave it back over the fence and the 4 tracks into the goods wagon, then go to Winchcombe and get supplies.
Yes, sir ! 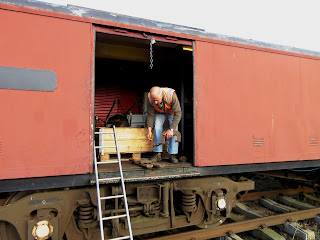 A good rummage round the GUV at Winchcombe produced 8 sets of temporary fishplates and their clamps. We then filled the rest of the load space with PanLock keys in sacks. These were stored in a dumpy bag on the ground. When we had finally emptied the dumpy bag, Doug in the Telehandler kindly offered to lift the entire dumpy bag on the Landie for us. Great idea, but about 15 minutes too late. 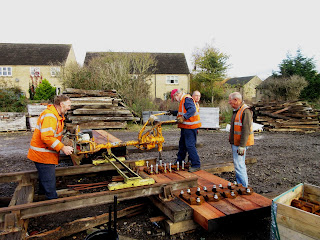 The rest of the gang at Winchcombe were fitting wooden sleepers with Pan 11 base plates, while Doug in the Telehandler was busy reloading the extension train which had been parked here for us.
Lots of logistics to think about. We still need more concrete sleepers at Broadway, to complete the lay by the goods shed. 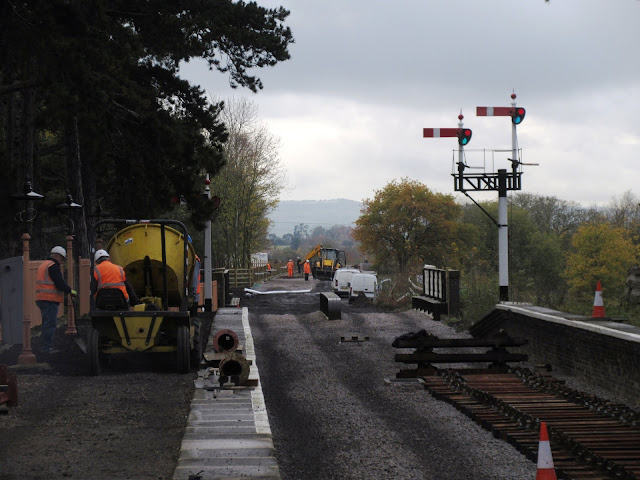 We took the Landie to Broadway, loaded with the fishplates and clamps, as well as a generous supply of Panlock keys for bullhead rail on wooden sleepers..
At Broadway the station gang and PWay gang were within sight of each other. Only 100 yards perhaps now separate the two ballast beds, as you can see in this picture. In the distance about 80 sleepers are being laid out for today, all that remained on site.
The vast pile of ballast scraping from in between the Broadway platforms has now come full circle, as almost all of it was dumpered from the car park back into the platform area, where it is an ideal and cheap infill. Here the Broadway gang are adding a final layer on to platform 1, which has settled somewhat from when it was first back filled several years ago. 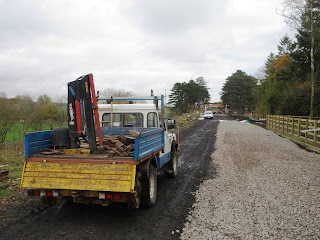 Having off loaded the PanLocks by the platform railhead - where another PWay gang was keying up Saturday's work - we took the rest of our cargo to the southern rail head, so that the loose rails laid a week ago could be plated up. This is a temporary arrangement, as the rails here still have to be drilled, or welded up, alternatively. 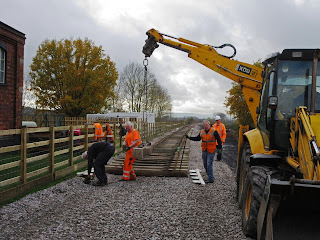 Meanwhile, the laying gang today were coming to the end of the 80 sleepers left to lay. Here Paul is holding off one of the final sleepers, while Andy measures the exact distance required from the fence.
Paul reminded us gleefully that the sleepers had now reached the goods shed itself - it's true ! 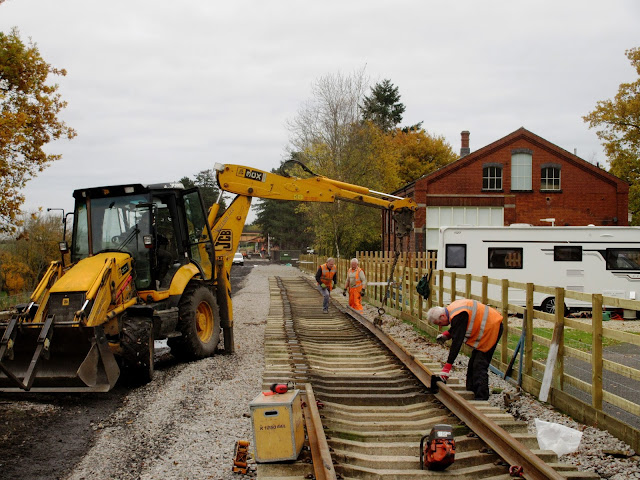 The dear old Landie was then asked to do yet another journey down the line, this time to fetch the rail saw, so that the rail ends arrived here could be sawn off square. As we are working on a curve, the outside rail slowly overtakes the inside one, hence a periodic adjustment.
After the ends were of equal length, the first rail length today was lifted in. 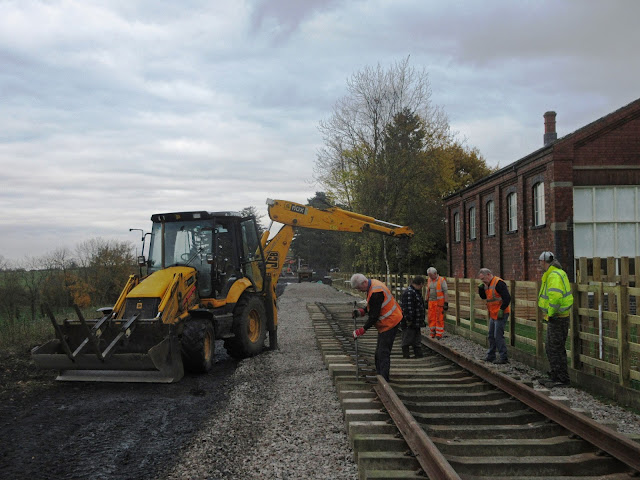 As dusk started to fall Andy and his gang were just lifting in the last of 3 pairs of rails laid today. The rails too have now reached the goods shed. We still have enough prepared ballast bed for another days laying here, before we reach the general area of the southern turnout. 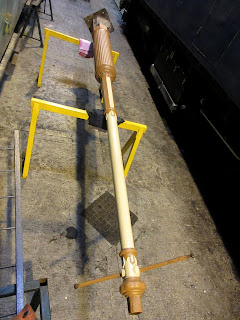 After we took the tools back to Toddington, a member of the loco dept. pointed out to us that the GWR yard lamp had now been stripped and painted. It was in the shed.

Here it is. Sorry about the colour, but it is seen here in the evening, under orange arc lamps inside the shed. It is painted light and dark stone, with the raised pattern specially picked out.

Now to plant it by the water tower.