Five jobs for the gang today! We couldn't believe it, and buried our heads in the tea and mince pies. Minus 1 degree C too.

But it was true:

Busy, busy, busy. We shall have to spead ourselves thin.

In order to close the gap at Broadway, we need one final trainload of concrete sleepers. As it happens, we have just that at Skew Bridge. Three of us ventured down to Gotherington to load them on to the two bogie flats, which had been parked there waiting for us. 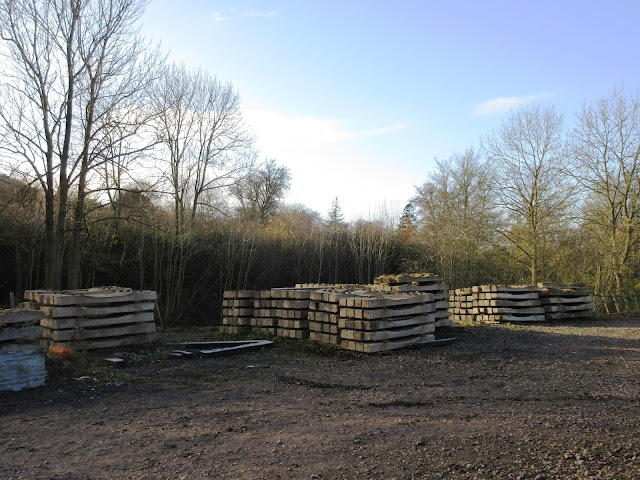 This is all that's left now, and they are not all suitable, so you have to pick carefully. Some are different sizes, and some are broken. 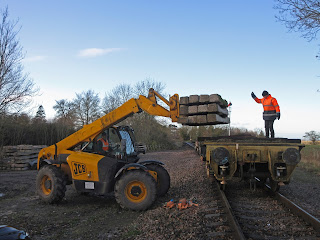 Jules jumped up on to the wagon to be banksman, while Peter continued to hone his growing skills as a Telehandler driver.

Here the first load of 8 goes on. 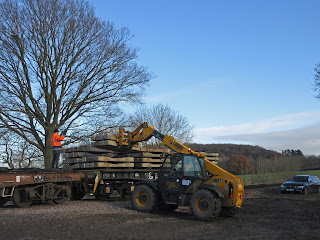 With 8 being lifted on at a time we soon had the first wagon filled with 128 of them. Ideally, we need 240 loaded, if we can scrape enough together.
This team worked through to lunch time, and ended with 194 loaded in all. Then we handed over to the Telehandler refresher course team, who had their theoretical course in the morning, and needed something to practice with in the afternoon. We left them a few more piles to play with.

The three of us then car shared back to Toddington, where a steaming hot meal waited for us. All 20 or so volunteers came back from their individual activities, to find maitre d' Paul in a steamy kitchen with today's delicious offering. What would it be? 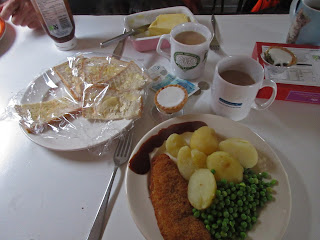 Fish! And you'd better like it, or you know what you can do!

Paul really pulled his finger out today, as we were priveledged to be in the presence of our new volunteer liaison officer Ian Stewart, who came to see what it was all about. We tried to impress. It was haddock filets, with buttered potatoes, peas, bread and butter, tea, and iced mince pies. A cheeky voice demanded tartare sauce and received a swift and stern rebuff, what do you expect for just £2.50. 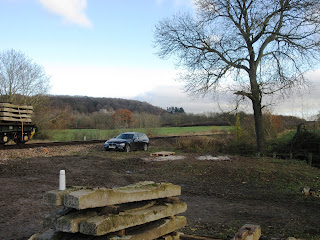 After lunch it was back to the Skew Bridge sleeper depot. There are hardly any sleepers left now. Do you remember the huge piles that were here? Now you can park you car there. There were once 7000 sleepers here, and we have loaded and laid them all. 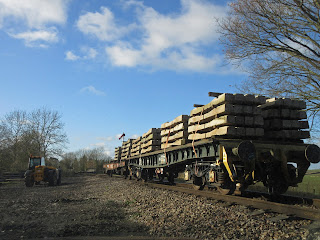 Here is the train, now three quarters full. Half a wagon is still available for loading, we left that to the refresher course team.

After a handover in which we explained what was left and what needed to be loaded / discarded we left them to it. Fingers crossed that they all passed.

Peasebrook farm and the track sweepers next then. 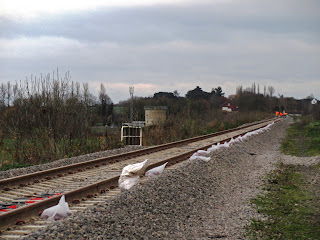 After the passage of the ballast regulator there is a kilometre of track to sweep by hand - two rails, each with two sides. Grab a broom and join in.

The regulator does a fantastic job, but it does leave a line of ballast inside the web of the rail, and in and around the Pandrol clips. When we lift the rail on to the rollers for stressing, the risk is that somewhere some of this ballast will fall under the rail, and then we can't clip it up any more. So better to sweep it clean first. Many sacks of extra Pandrol clips have been laid out, but equally many more are still required too.

The section in the photograph has already been swept, and the little gang of broom handlers can be seen in a knot in the distance. The distance to do seems endless, but they plod on in a steady wind and a temperature only just above zero. Never mind, the job keeps you warm. 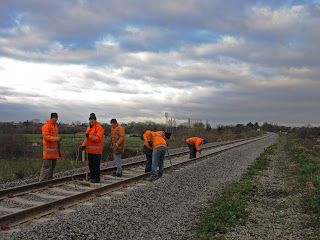 Here they are, armd with brooms, shovels and scrapers. No one tool actually does the whole job, so there is a bit of a division of labour going on here. 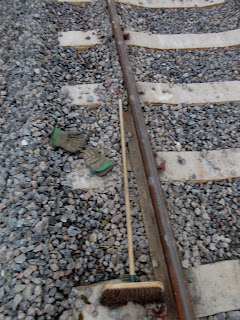 This shot illustrates what's going on. Nearest to the camera is a bit of rail that has been partly cleaned of the worst of it (a final sweeper will follow) while at the top is the ballast around the web before we have done anything to it yet.

This broom here comes from the blogger's own mother in law - she's a test pilot at the broom factory. 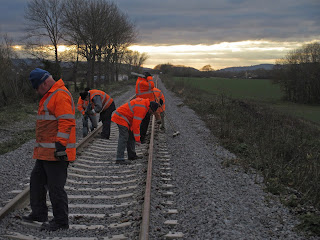 With only one panel left to do (out of 50) there was a sudden consensus to call it a day. It was getting dark, and the constant repetitive action does get to your back in the end.

The last panel shouldn't take long. The concrete sleeper wagons now have to pass over this stretch, then it can be unclipped and lifted on to rollers for stressing.

The stressing itself is due in a fortnight, followed by a mammoth 'Clippathon' the very next day (a Wednesday) in which we need as many volunteers as possible to clip a kilometre of track up again, all at once. Many hands make light work, so do consider joining in to help.

We hope to get all the rails to Broadway laid by the end of the year. Ballasting, tamping, sweeping etc requires fewer people, so that the main gang can then turn to to this year's closed season task,  a job in Toddington yard involving two turnouts, which will give the loco yard better access. That will take place in January and February.

Over the last 5 years we have assembled all sorts of heritage kit for Broadway station. It's not something you can just go out and buy, because when you want it, it is not there. Patience is required, and a lot of luck.

In this way we have collected amongst other things two original crowd barrier posts for the booking office, and with the help of a friendly neighbouring railway, we had two more cast. When they are in position, they should look like this: 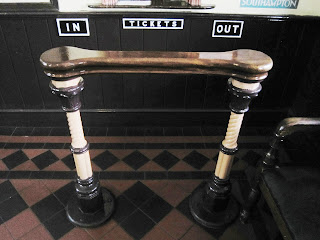 We have the cast iron columns then, including the four base plates at the bottom, but not yet the wooden tops.

In a great act of cooperation, our Winchcombe carriage and wagon department has very kindly offered to make the wooden tops for these crowd barriers. This is great news. To help them see how the tops fit on to the posts, we took one of them to Winchcombe today, so that work can start without delay, ready for the opening. With a bit of luck, there will be crowds at Broadway for them to manage too.

The 'IN' and 'OUT' plates have also been found and copied, as well as the small 'TICKETS' plate for under the ticket hatch. The original for this was found in the estate of a supporter at Willersey (for which once again our thanks) and you can imagine where it might have come from. Which station with a booking office was the nearest?