We had a dire weather forecast today, but heigh-ho. Nothing ventured, nothing gained. At least it wouldn't rain until 11 am, but then it would kick off.... 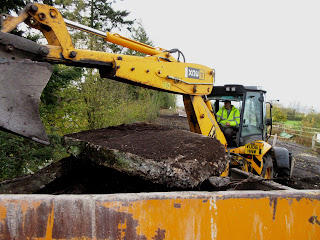 Let's get something loaded, make hay while the sun shines (or while the clouds hold back).

In the rubble along the bund were some major pieces of broken concrete, probably from those demolished corrugated iron packing sheds. We collected these in one load and put them to one side. 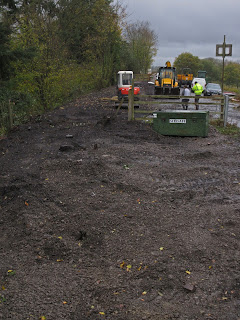 These lumps came from the area to the left of the green site safe.

As you can see, the former bund on the left has now been removed, and Steve will shortly build a new fence along the shoulder on the far left.

Dark grey clouds are gathering on the horizon. 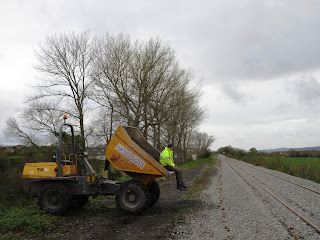 At 11 o' clock we got a phone call from Steve to say that he had just finished loading a ballast train, would we go down to Peasebrook and help empty it. We went down to Peasebrook. No train, just a biting wind from the left. We sat on the dumper, tipped forward to shelter us. 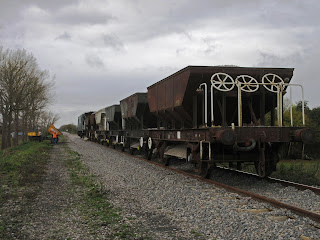 The train of 6 Dogfish duly came, and we wound open the wheels on each one to get ready to discharge the load. 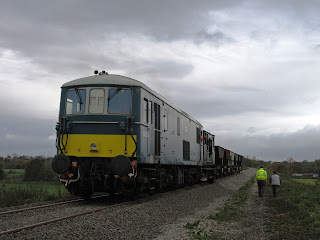 The class 73 then pushed the train back up towards Broadway, with the Shark between loco and Dogfish positioned to plough the material out of the four foot.
The darker grey shows the progress being made.

The driver remarked that it was now uphill towards Broadway, and he had to give the old girl a bit more welly to overcome the resistance. 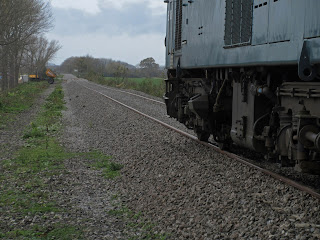 Looking back, a good pass here, with most of the sleepers ends covered, as they should be.
Another pass with the plough, and with a tyre attached in front to encourage more ballast to be swept over, and it should look even better. 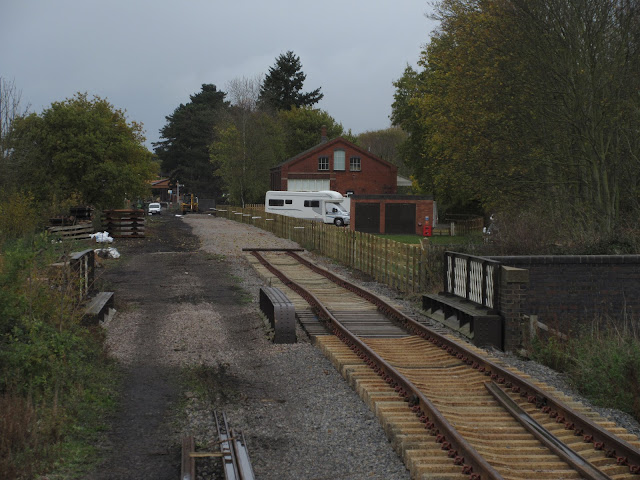 We returned to Broadway to resume scraping the top of the embankment, in preparation for Terram to be laid down. Beyond the rail head you can see the new stretch of ballast just laid down, and this will be used tomorrow to extend the track. Good forecast too. 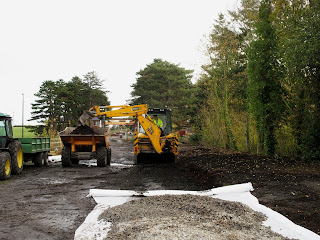 Here's the end of the Terram so far.

Adam's mini digger is crippled with a torn caterpillar track, so we see him here in Steve's JCB, scaping the sticky wet dirt into the dumper. 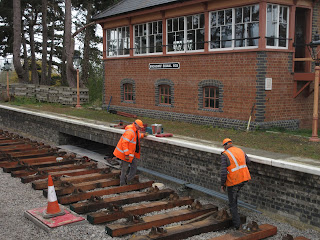 We dropped into the BAG 'cafe' for a quick lunch, passing the S&T gang trying to puzzle out their rodding cranks. No, the rodding cranks are not the chaps in the picture, it's the elbow shaped bits of kit that are bolted to the base plate by the slot under the box, which allows a change in direction for the rods running down to the northern two turnouts. 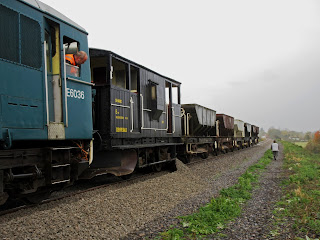 After lunch, another call from Steve: back to Peasebrook for a second train load of ballast, to be dropped on the last 1000m of CWR, up to the breather, or expansion joint. It's now definitely started to rain. 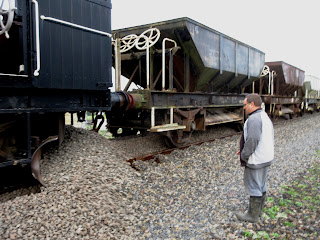 A slight worry was that the Shark would hit the breather installation, here just in front of the pile being pushed along. Steve was there to make sure it didn't catch. No worries, it just cleared with about half an inch to spare. 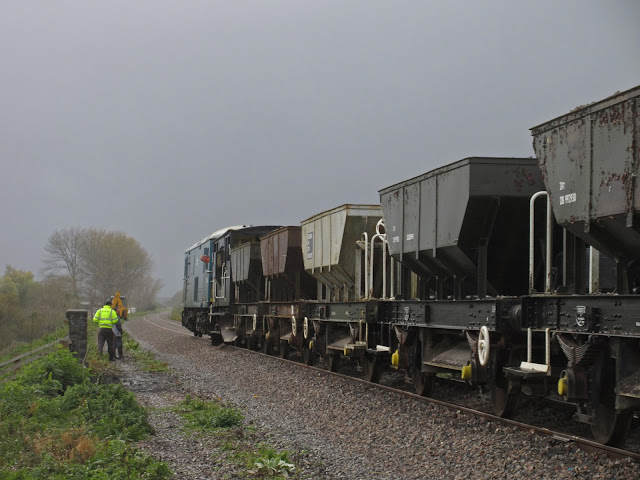 Here 's the second ballast train slowly grinding back south towards Toddington, with a tyre attached to the plough just behind the loco.
The sky is now so dark that you can't see the hills, which is bad news for those staying outside. But we came down in the JCB this time. 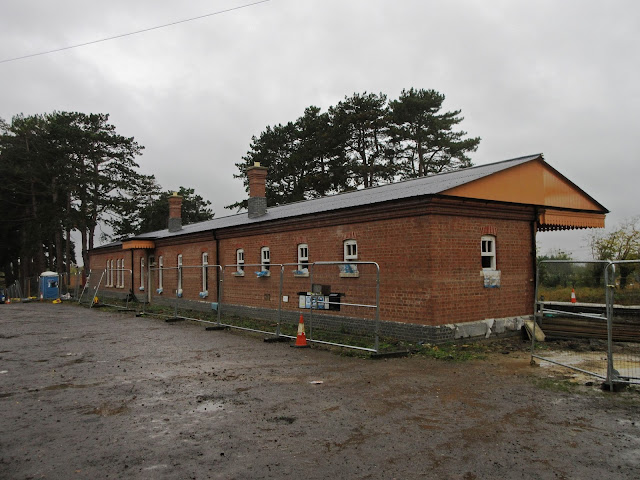 Back at Broadway, the first ceiling panels were being installed in the station, in the Gents toilet.
Outside the scaffolders took down the rest of the scaffolding, revealing the station on its own for the first time, partially hidden only by the Heras fencing. This is what it's going to look like, chaps. With a canopy overhang still to go on to the right. That should be a big dry circulation area under there.
The cafe was designed to occupy the space behind the 4 windows on the far left. The 4 small windows in the foreground all concern the toilets.

No developments on our Broadway cafe, other than that the subject will be discussed at the next board meeting (see boardroom blog update).
If you are a stakeholder you can always use the GWSR plc website to share how this affects you.

The foundry that casts our replica GWR lamp posts, ball topped gate posts and finials offered us a tour of their installations, which two heritage minded volunteers gratefully accepted. 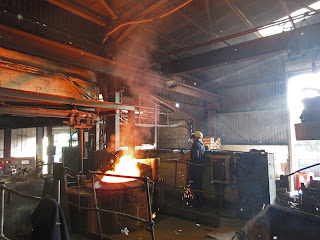 This is the 'cooking pot' in which raw scrap metal is melted by the 'cook' (as we are tempted to call him) standing by on the right.

We were saddened to see among the scrap items a number of cast iron railway chairs - lets hope they were LMS !

Could we deliver our scrap chairs directly to the foundry, and cut out the middle man? 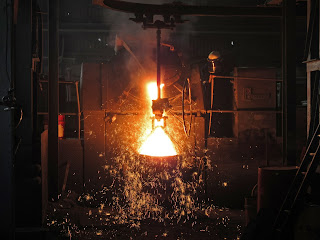 Below the raised platform that holds the 'cooking pot' is a system of overhead mono rails that allow pots of molten metal to be transported around the foundry.

Here you can see the contents of the 'cooking pot' being emptied into a transporter crucible, while the 'cook' looks on top right, controlling the pour. 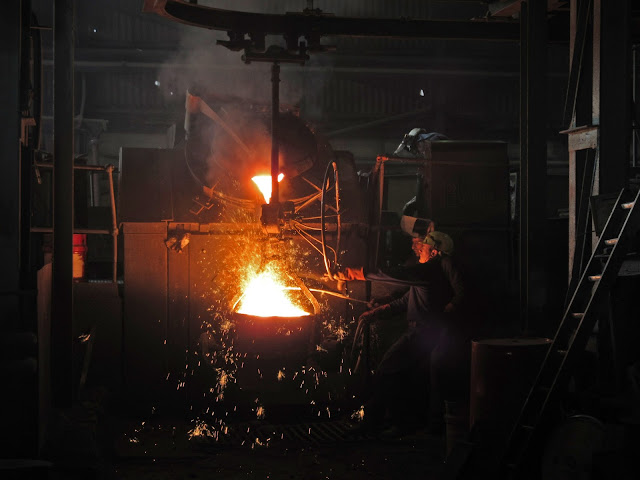 When the crucible is full the melting pot is returned to its level position, and two workers get ready to roll it to the next stage, suspended form the monorail at the top of the picture. 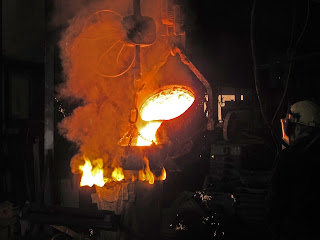 The molten metal is then disbursed into a secondary crucible (the purpose of which was not immediately clear, keep up at the back there).

Everything is still supended from the monorail, a whole system of overhead rails with its own little switches to change direction, and large handwheels (top left) to raise or lower the crucibles. 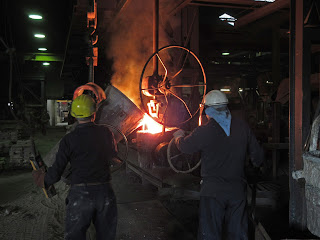 A little further along and the secondary crucible is used to disburse sufficient quantities of molten metal to smaller units that travel along the monorail to different casting activities about the site. Two are being filled here. One area (of several) casting activities was here, where a worker was removing the tops of moulds recently filled with molten metal. Many different types of molten iron are available, depending on end user requirements. We saw parts for hydraulic pumps and sewage pumping stations being cast.

The moulds are made up by another team behind the camera, using wooden patterns from a stock of over 2000, and sticky foundry sand (most of which they manage to recycle). 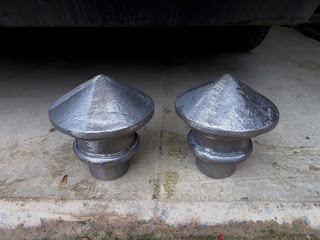 And here's one they made earlier. Perfect reproductions of the finials that go on top of GWR running in boards. These are for Broadway, two more for a private customer who asked to us to make some for him. 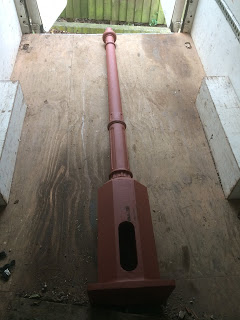 And here's a GWR platform lamp post casting, one of 3 recently supplied.

One was a supplemental one for Broadway (it now stands in the middle of the hole that used to grant access to the trackbed from platform 1), one went to a GWR station and another was for someone's garden.

You can order some for your own railway project through this blog (breva2011 at hotmail.co.uk). This is a volunteer effort; profits go to the GWSR.