The regulator is back

We have the ballast regulator back to sweep one or two odds and ends, but principally to clear the last 500m of the next section to be stressed. This had extra ballast dropped on it to deal with low spots, and to give more support to the sides. 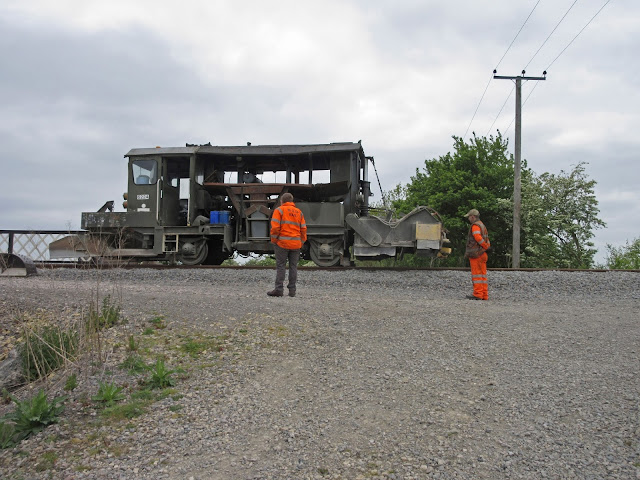 After dealing with a couple of spots near Laverton, the regulator arrived at Little Buckland to consider the job. 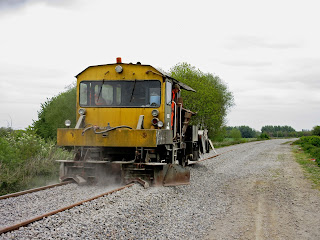 It was decided that a first pass with the ploughs out would be helpful, so these were swung into position, dropped down,  and the regulator then moved off in the direction of Peasebrook Farm, crunching and squealing as it went along. 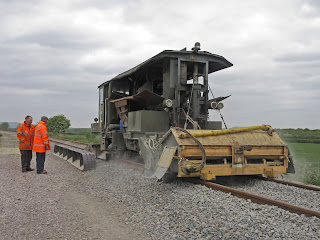 After returning from Peasebrook, the ploughs were withdrawn again, and the brush box dropped, just north of the bridge. 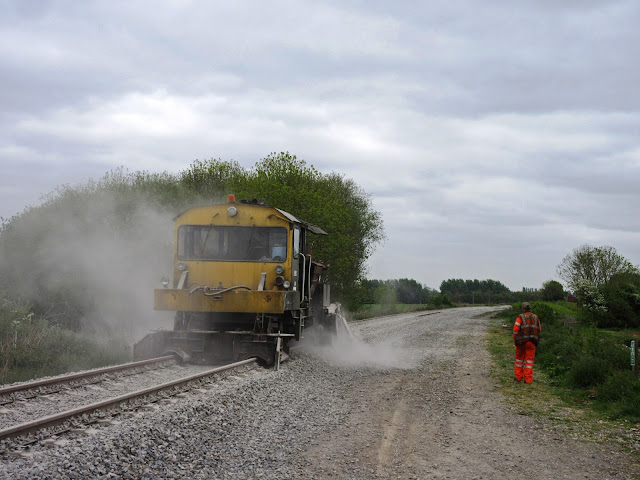 The regulator then moved slowly north, creating its own little dust cloud. The bed it left behind is already much cleaner, and now just needs some manual sweeping over 500m to get it perfectly clean, ready for lifting.

We will be doing this tomorrow, and inserting the rollers that permit the stressing to take place. 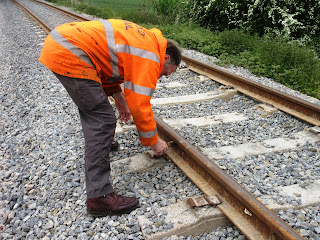 As this next 1000m section is almost entirely on a curve, two sets of rollers will be used. The normal flat rollers go under the rail on every 8th sleeper, and to prevent the rail from moving towards the centre of the curve, additional side rollers are attached to the hoops, as demonstrated here by Steve. All very interesting, it should be quite exciting when they do this next Tuesday. Wednesday then is the big clipping up day. 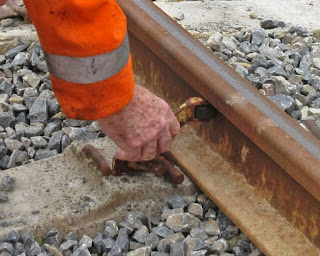 Steve shows us the special side roller that's used in curves on CWR. It attaches to the hoop on the SHC sleeper.

Riveting at Toddington continues to do well. 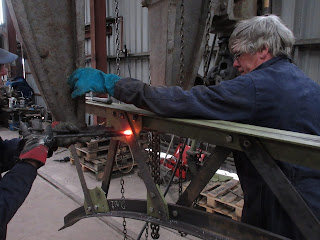 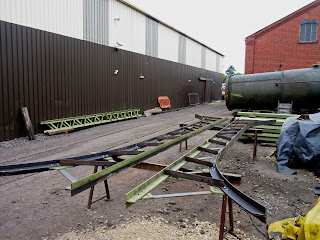 Outside, the two completd ridge purlins are ready for painting, which may happen tomorrow (Broadway being a bit blocked with the container movements)

On the right is the stack of fascia boards, and on the left some of the other purlins, all riveted.

Some more gusset plates have to be made, before trial assembly can be entertained. 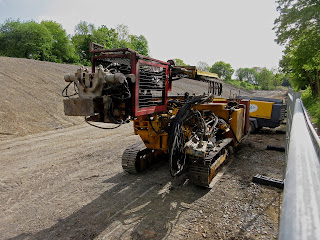 The soil nailing rig at Broadway is ready to go. Other kit was being delivered late last week; the first soil nails are being sunk today. 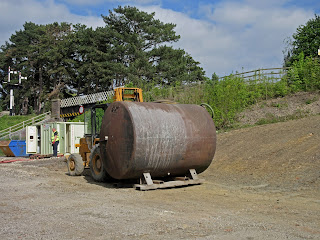 This is the 'water tower' being delivered on a fork lift.

It will be filled with water which will provide the drillers with cement mix that will be injected down the holes. 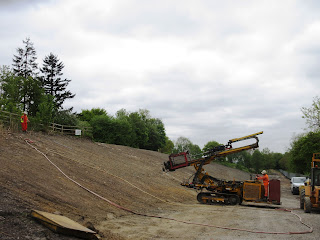 This morning the drilling rig set off to climb the embankment towards the first hole, located top left, where the worker is standing.

There will be about 500 of these soil nails, spaced 2m appart over a 150m embankment, in several rows. The top row has nails 9m long, the middle 14m and the bottom shorter again.

If the rig starts to climb, won't the rear end overhang jam on the ground? 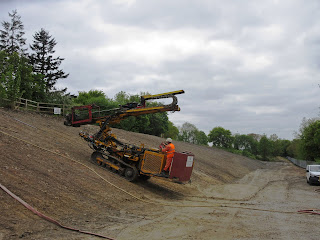 Aha, the manufacturer (German) has thought of that. You can lift the platform hydraulically, so that it is always horizontal.

And up it went. 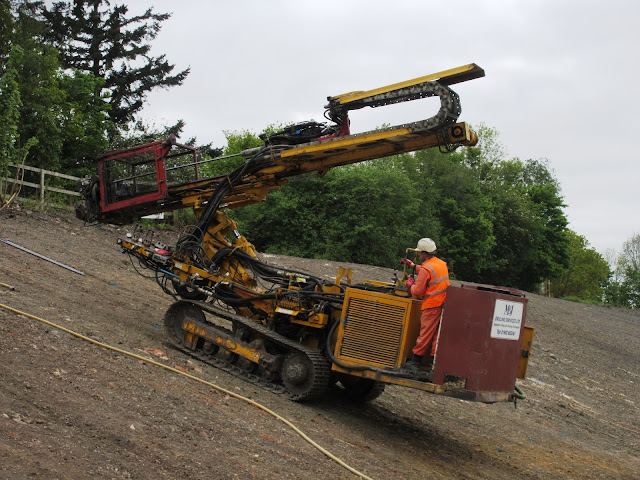 Here's a close up of the beastie. It's already fitted with the first rod; a second (silver) lies top left, ready to be fitted. This rig can drill though most types of soil including rock, but obviously things are simpler if the terrain is soft clay like ours, so no great problems are expected. 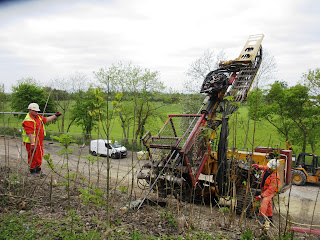 Arrived at the top, the rig is positioned so that the bit points at the desired hole. It is then drilled down like a big version of your domestic drill, except that here the bit can be lengthend, as in an oil well, by adding additional lengths of pipe.

The drill head and pipe are sacrificial, i.e. they are single use and stay in the ground. 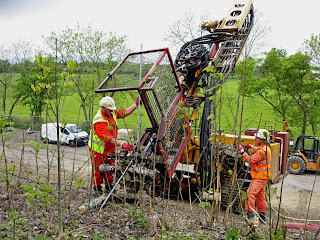 When the first length is in the ground - it didn't take very long in our case - the operation stops, the cage is opened and the next length is inserted, attached to the first by a sleeve. The pipe is hollow, and down it a cement slurry is pumped. This comes out through the drill bit at the bottom, the rises back up the holes outside the pipe, sealing this in cement, and at the same time filling in any fissures or voids around it. You end up with a concrete rod which is a couple of inches in diameter.


The end of the pipe that sticks out of the ground is finished off with a big plate and a cap. Over the whole area a net is pulled, and this unites all the ends of the rods into one unit. Finally, the whole area is hydro seeded. 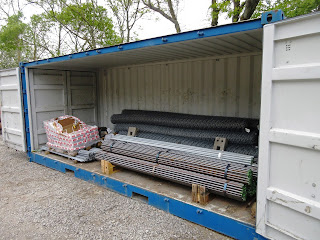 There's a big box of parts at the bottom - drilling pipes at the front, galvanised pipes that protrude at the surface, wire netting to cover the site. 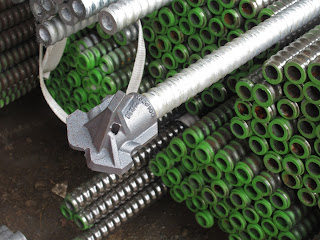 The site manager was kind enough to show us what a drill bit looks like. There's a bag full of these, and one is fitted to each of the lowest pipes that go in the ground. The cement slurry that is piped in at the top flows down the pipe, and exits at the bottom through the square hole in the middle of the bit. It then flows back up, filling the voids as it rises.