Our gang today split into two: One to do sleeper stacking at Gotherington skew bridge, the other to lay out rollers for stressing on the extension, and to clip up the track laid on Saturday.
As this news is hot off the press and your blogger can only be in one place at a time, this report is from - Gotherington.

Sleeper stacking then. Although we kick off at 9am at Toddington, we have to drive to the site (wherever it may be that day) and before that, we have to find the kit, get the Telehandler, and find or load the forks. There is always something unexpected to hold you back as well. What would it be today? 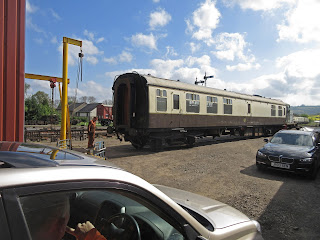 Surprise! A railway carriage parked across the access road to our yard. It was cunningly placed just around the corner of the shed, so that you had to drive right up to it before you realised that there was no way past. A queue of volunteers and Telehandler soon formed. Eventually it was hauled away by the 03 shunter.
Tools found, and the stillage for the track gang lifted into the Landie, we finally set off for Gotherington. Not before we were waylaid at the gate by the B&S mob, would we please just do a little lifting for them. Oh alright then. 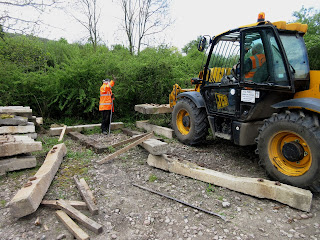 We found the yard at Skew Bridge scattered with abandoned sleepers, left over from the previous loading session. We tidied these up, then laid out new bearers for the first few stacks.

The target for the day to beat was 80 sleepers extracted from the jumbled pile, sorted and stacked. 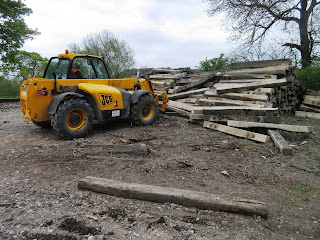 We had two Telehandler drivers in our little gang of 3.

Here is Peter, charging at the pile in the hope of netting one or two desirable sleepers.

The other two were on bars, to straighten them up into neat sets of 4, after which they would be stacked in groups of 20. 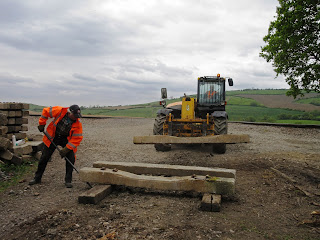 There is a temporary stacking base by the gate, to which crooked, upside down, unsuitable or broken sleepers are brought. The men with the bars check the quality of the sleepers offered, and make the rest into neat piles of 4. That's hard labour on the bars, those sleepers won't slide along very easily. 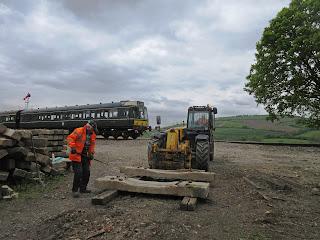 While we do this, various trains go by. Here's the DMU heading north, just after pulling away from Gotherington. The trains did not seem very full today, perhaps people have had a surfeit of days off after the bank holiday? 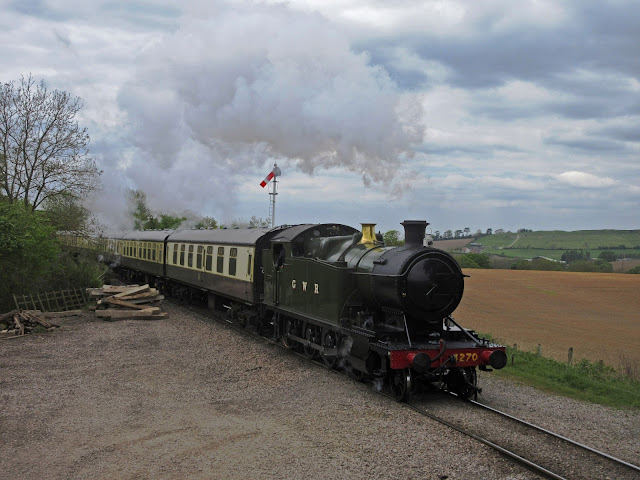 By careful study of the timetable, it is possible to take one or two interesting snapshots of steamers going by. Here's 4270 accelerating out of Gotherington. A word of thanks here to Bob, for moving the Telehandler out of shot a few seconds before 4270 came chugging round the bend. You can still see the wheelmarks! It was a hasty departure, but the result speaks for itself. 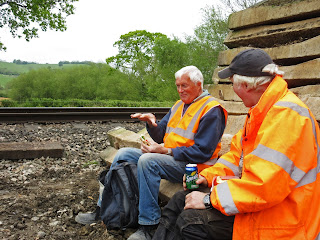 It was breezy today, cold if you stood in the wind, and hot if the sun came out.

For our sandwich lunch, we checked the site for wind, and found the shelter of the sleeper pile to be the warmest place.

Peter told us of his trip to Japan, the bullet train and the sight of Mt.Fuji (from a distance of course). 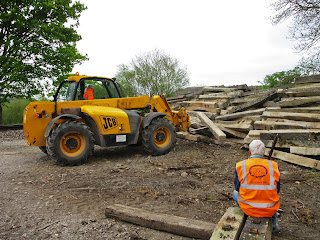 After a short sandwich break, we swapped Telehandler drivers and it was Bob's turn on the forks. Peter has decided to watch the spectacle from a seated position. Bob is trying to extricate a single sleeper at an angle, and with forks that are on two slightly different levels. Tricky. With the cab offset to the left, he can see only one fork at a time, the LH one, so what the RH one is doing is always a bit of a guess. 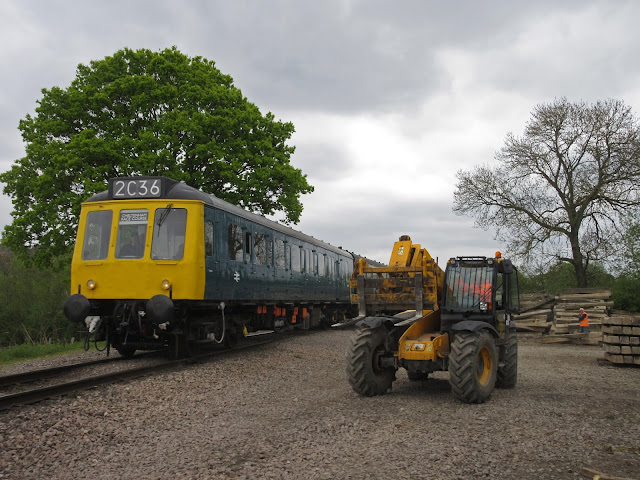 We warned Bob whenever a train was due, so we see him here paused while the DMU trundles by. 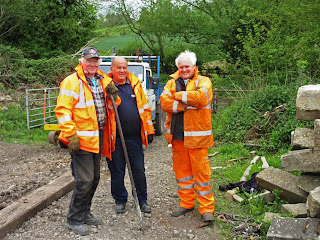 Towards the end of the day, as tiredness began to set in, we received the visit of two more of the gang. They said they were bringing tea and scones, but they lied. It was a load of bearers, recycled from Peasebrook. Damned. Hopes raised, then dashed again. 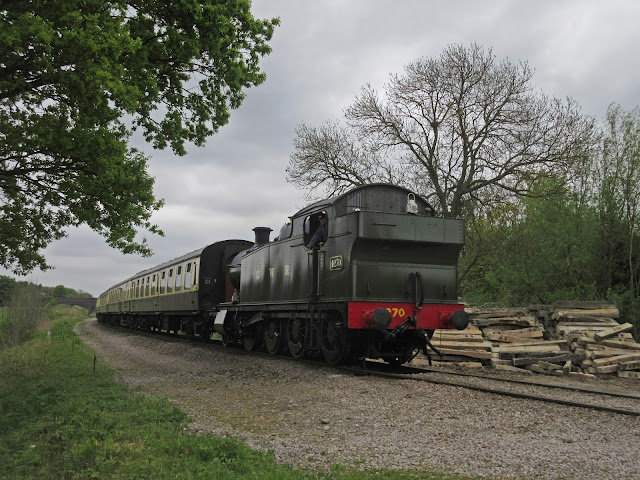 4270 came by in both directions of course, so here's a shot fom the other side, with the train heading south. The slightly diminished but still sizeable stack of jumbled sleepers is on the right. There's a good few more sleepers in there. 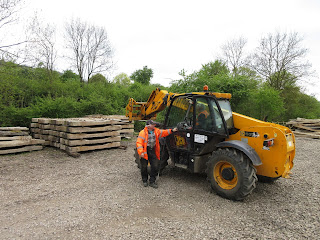 At the end of the day, we had made up these neat stacks, seen here in front of the Telehandler. Bob and Peter are congratulating each other, because we managed - 120 of them. Tiredness began to set in, so we called it a day with this total, with which we were very pleased.

The riveting of the 7 trusses for the Broadway canopy was completed yesterday. 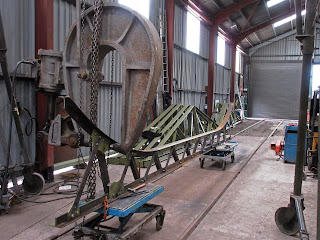 You can see them stacked at the back here. The trusses alone swallowed some 500 rivets, and to that you can add those in the purlins and the fascia boards. There must be well over 1000 of them, all done individualy by the great horseshoe riveter in the picture. Next on the menu, and last of all, are the ridge purlins supplied by a contractor. One of these is shown set up here. They go in at the apex, in between two trusses.
Glazing and corrugated iron are being discussed at the moment. 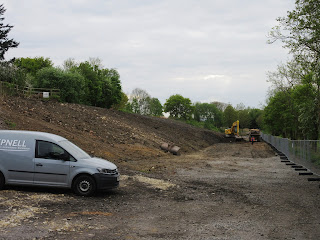 On the Broadway embankment, our contractor has continued clearing the slope of vegetation, and making it smooth and accessible for the soil nailers, which are due next week for a period of a month. 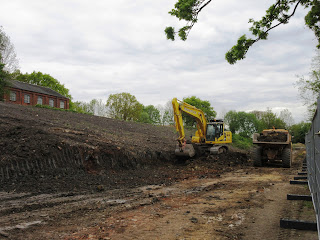 The bottom of the slope is being straightened as well, and at the foot a strip of level ground is being created which is 11m wide. All the voids have been filled in up to the trees in the background, and the surface made level.

Cars could park here in a herringbone fashion, but it isn't a formal car park yet, and we don't have planning consent to use it as such. With the limited funds we have, that's a project for another day. 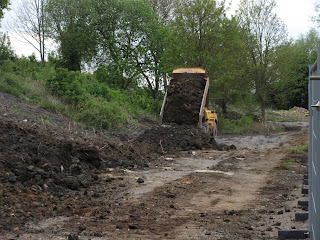 The excess from the middle is being dumped at the rear, by means of the large 25T dumper.