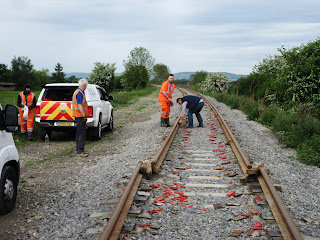 We see them here at the mid point of the second kilometre, which is also mid way round the Little Buckland curve. No, we're not changing from Brunel gauge to standard gauge here, the track has been prised appart due to the changing weather, so that the rail can expand past the opposite ends. This eliminates the potential risk of buckling. Hot sun, followed by a cold rain shower, can have nefarious effects on uncompleted CWR. 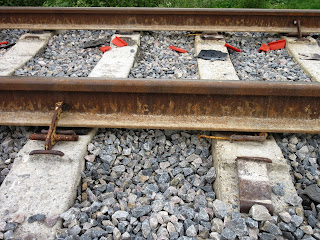 This being a long curve, we have both rollers under the rails (on the right) as well as side rollers (on the left).

You can see that, due to the rollers, the rail is 'floating' above the pads, and in this way can be pulled to the right level of tension. 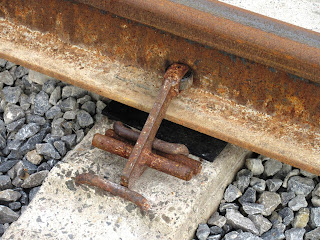 Here's a side roller in place. The new rail, delivered only a few months ago, is already rusty and dirty, the latter due to the ballast dropped on it, then swept away by the ballast regulator.

You can see that we don't want any bits of stone under it, hence the additional manual sweeping to get everything clean. 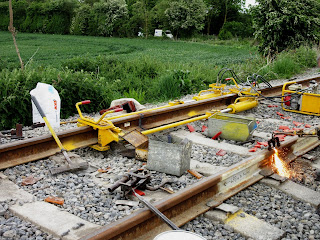 The actual stressing was very efficiently executed, and didn't take very long. The Malvern side rail, at the top here, was done first. The outside temperature was 15 degrees, while the rail temperature was a completely different 21 degrees. These temperatures are fed into a model and the resulting gap to be cut out was 110mm today, plus the gap for the weld. This is the state at the back, which has just been stressed and is awaiting welding. In the foreground the gap for the Cotswolds side rail is being cut. 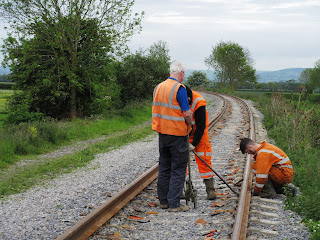 While this is going on, other members of Haigh Rail, and our small GWSR gang, work down the 500m south to remove the rollers, which are now no longer needed. They are at 8 sleeper intervals, and each removed roller has to be replaced by a pad - on a clean surface, mind. No stones or mud underneath (otherwise it is impossible to clip up) and no fingers underneath either. It's all poked  out using one of the pads for a stick. 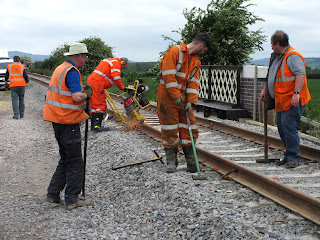 Next to that, we have to quickly clip up the 5 lengths immediately to the north and south of the weld, so that everything is secure. The rest then has to be clipped up as soon as possible thereafter - that is tomorrow's job. A huge clipping up excercise is due then - 35 volunteers are expected, 5000 clips to be done.

Andy and Nigel can be seen clipping up at Little Buckland Bridge here, while in the background a bump on a previous weld is being ground out. 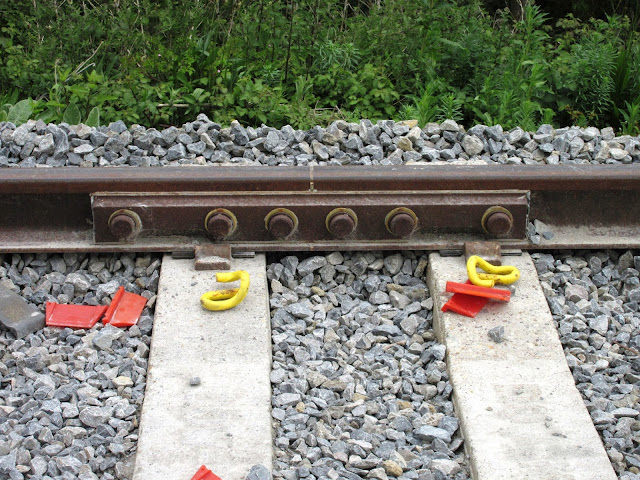 This stressing, even for the measly 11cm today, results in the IBJ moved a similar distance to the left. It means we have to dig out these two sleepers, move them sideways, and dig them in again. Very tedious. The special clips for these joints have been laid out in readiness. You can't do anything about this while alying the track, or while ballasting. 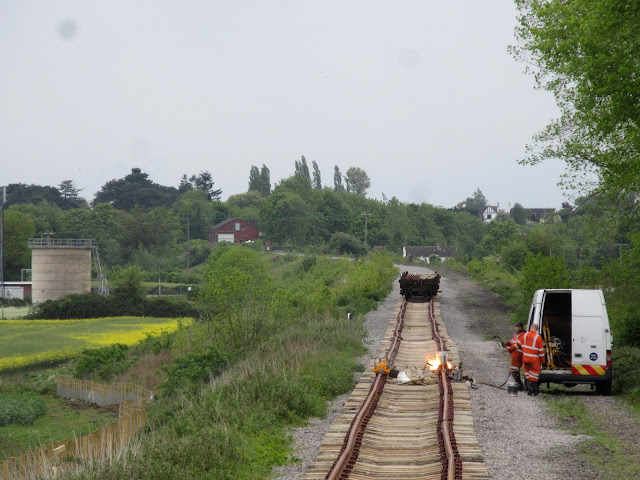 More work was done by Haigh Rail near the rail head. The rail wagons have been pushed to the end of the rails themselves, while the next 6 panels are welded together - 12 welds were done in all here today. In the picture you can see one of the crucibles in the middle of its chemical process.

Not much further now, in this telephoto shot, before we enter the long curve into Broadway itself. We will have one more 1km stressed section to weld up, then we will continue with 120ft lengths; a mixture of welded and fishplated rail. 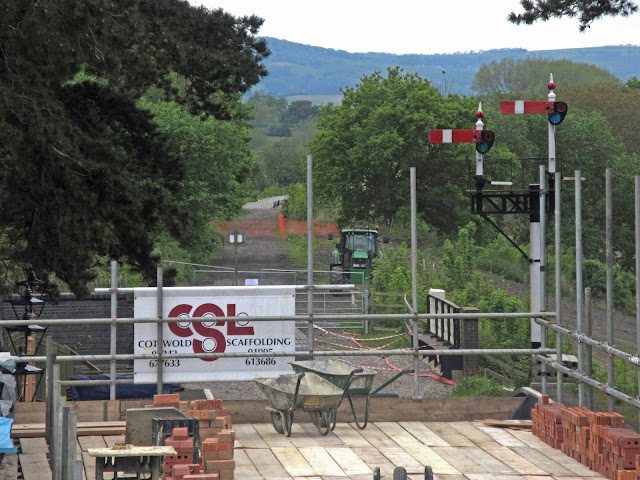 To finish with, here's an unusual shot taken the other way. It's from the Broadway footbridge, looking over the station roof, past the goods shed embankment, the soil nailers' orange fence and in the distance you can see the end of the ballast, at the Childswickham Road bridge.

By the way, we are considering having some of these cast: 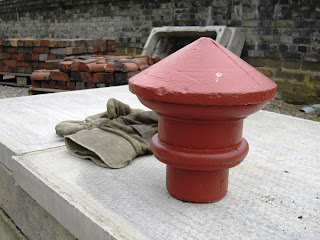 It's a finial for a running in board, or from a support for a modesty screen by the gents'. Depending on interest, we will either have some cast directly off this original (which would replicate its inperfections) or have a pattern made at extra cost, which would  give castings that are perfectly round. As it's not every man that needs one of these in his garden, the former is most likely option.

If your railway needs some of these, get in touch with breva2011(at)hotmail.co.uk. Any (modest) profits will go to the railway.