Sleeper sorting for next week

More sleeper stacking at Gotherington today - we need to have enough to fill the supply train again, so that we can continue laying, now that the second 1000m of track are clipped up. 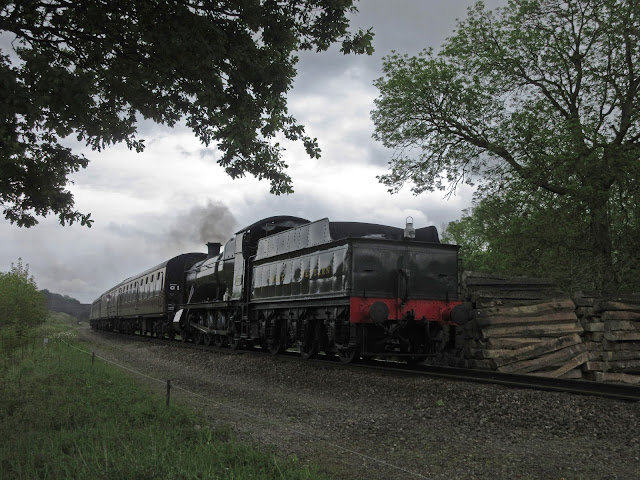 Sleeper stacking is always a pleasure, because for once, you get to see the trains go by. Out at Peasebrook, they are far away. Here 2807 drifts into Gotherington with a well filled train. 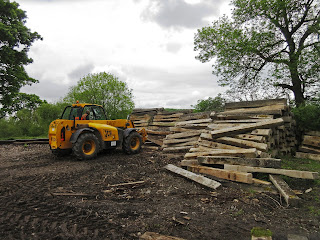 Once the train is out of the way, work can start. There are three of us here today, two on bars and one in the Telehandler. We made a super quick start today, and were on the job by 09.30. You could see the results at the end of the day too, we did really well. 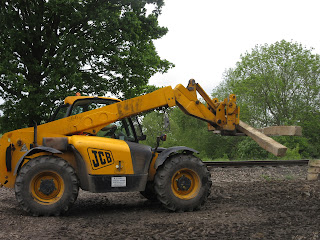 Alan was in the Telehandler, and charged the quivering pile with gusto. There isn't really a right way to get into the pile, as it's such a jumble, but often he did well, and fished out between 2 and 4 sleepers each time. Not all made it to the sorting pile; as you can see, some fall off on the way. 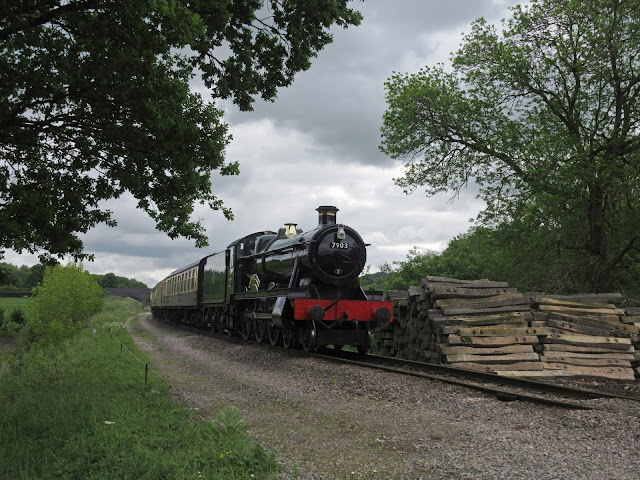 Whoa, got to stop again, here comes another train, where do they all come from? It was 2 steamers on duty today, and it was pleasing to see lots of passengers on the trains. 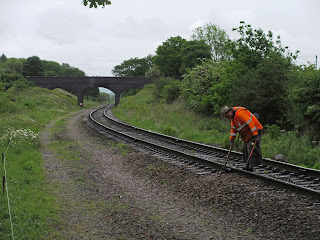 After a while, a little orange dot was sighted in the distance, slowly getting larger. This turned out to be our plucky track walker Dave F, seen here on the curve just traversed by 7903.

Dave is seen tapping each bolt on the fishplates, to make sure they are well done up, and that the fishplate is not cracked.

Believe it or not, this duty along the whole length of our line is undertaken quite regularly, by a small gang of volunter PWayers who walk miles, for our security. Think of them, as you glide by in comfort up there. 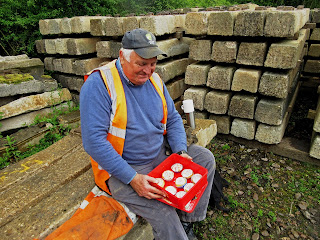 Because we split off from the main gang today (they were laying in the big rubber crossing pads at Little Buckland foot crossing, and dealing with snagging issues on the recently stressed and clipped up stretch) we did not have lunch together, but Mrs. B did make cupcakes for all of us, and those that were at Gotherington had their own, special box labelled 'Alan's gang'. That's us!

Here Neil is admiring the feast that is about to be.


Along came our plucky track walker (who has a certain food consuming reputation, aka Gluttonus Maximus)  and enquired whether the rumour that we had cakes was true?

Neil defended the cakes bravely, and denied all knowledge of them. But what is in that big red tin behind you, Neil?

Too late, the cupcakes had been spotted, they were doomed. Their lifespan was to be drastically curtailed, as were their numbers. 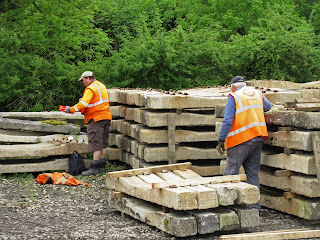 The Viking plunder of Lindisfarne was nothing compared to the ransacking that our cake tin was made to suffer. Neil could only look on. 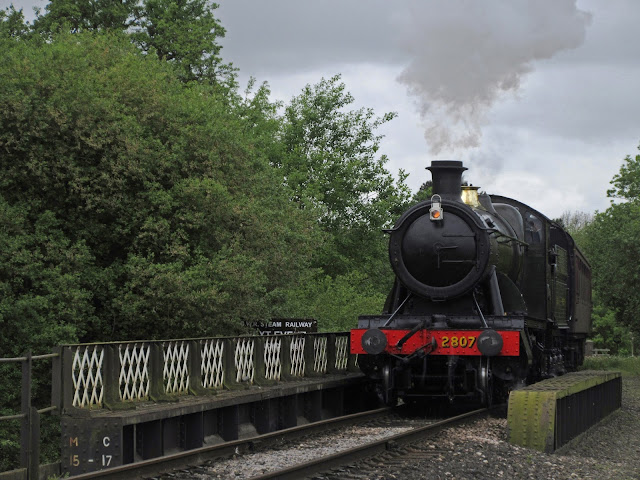 A clank and a whistle announced the return of 2807, this time the right way round for a photograph, as it steamed out of Gotherington and over the Skew Bridge, which gave its name to our little sleeper depot. 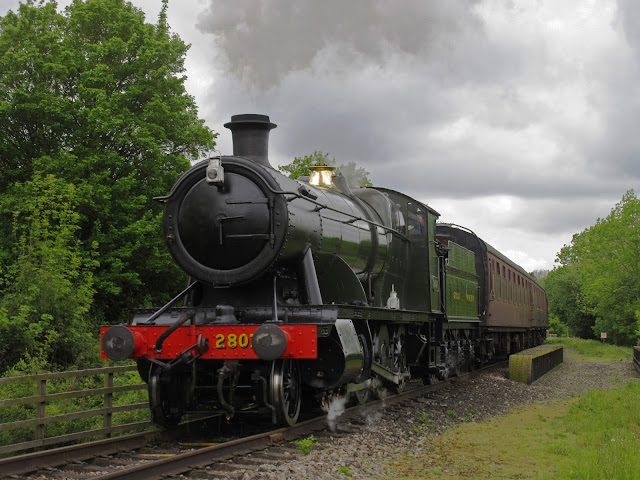 The joy of working in the PWay not only resides in laying track on the extension, but also in the ability to photograph working steam trains from unusual locations. In fact your blogger was actually obliged to stand here, to warn the Telehandler driver of the approaching train. Really. 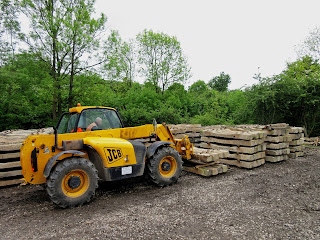 We made amazing progress today, thanks to an early start, a practised team, and good weather. By lunch time we had done 100 sleepers, and by the end of the day, another 90, so that all in all we had stacked what we think is a record for a day: 190 sleepers.

Ready for loading at the end of the day then were 400 sleepers, which should fill not only the two bogie bolsters with 160 each, but also the Conflat with another 80. 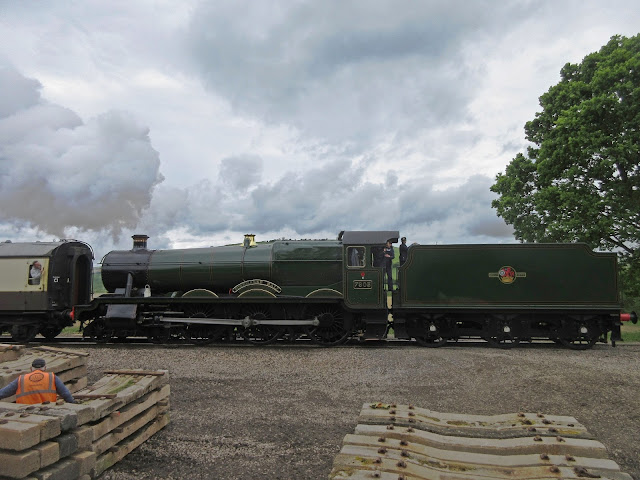 During our lunch, we were able to observe 7903 chug past out of Gotherington, here framed by some of the work we had done. We had set out a little bench of sleepers for us to sit on, in between the two piles here. That was a good idea, spoiled however by the drizzle that then lasted throughout our break. And the boots hadn't really dried out yet from their soaking from the mega clip up on Wednesday.... 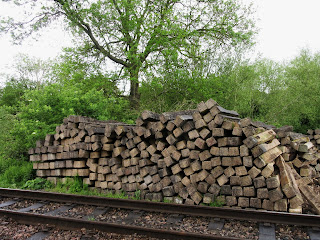 We're going to give you a little puzzle to solve. Some people have asked, how many sleepers do you actually have at Skew Bridge, and we said we didn't know exactly. So here is a through section of the piles. Count how many sleepers you see in this pile, then multiply that by five piles, and the total remaining at Skew Bridge is? 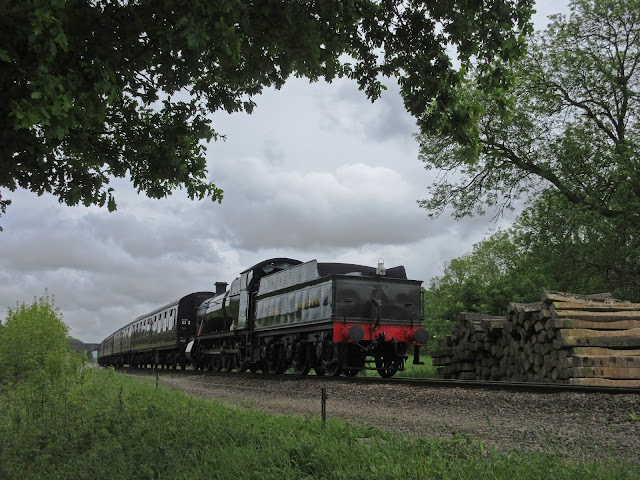 Our last photograph today shows 2807 again, with an early afternoon train of happy, fare paying passengers. The outer of the 5 sleeper stacks is just next to it.

We may well lay more extension track next Saturday - watch this space.

The soil nailers at Broadway are making good progress. 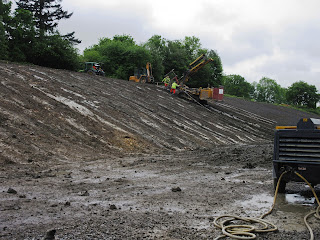 On Friday, two days after the heavy rain, they were in action near the top of the slope. You can see on the picture how wet it has been, the flat ground at the bottom is now all churned up. 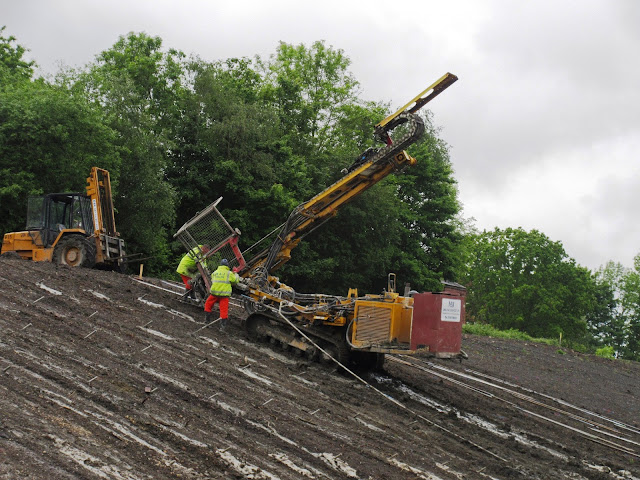 On normal days, they achieve between 25 and 30 nails in the ground, between 9m and 14m in length. At the 30 degree angle, most of their length is in the embankment itself. They've set themselves a target of 5 weeks to do the job, which sounds reasonable because at 25 nails a day, a month @ 20 days gives you 500 nails bored in, and in reality they have 518 to place. So we're doing OK at the moment, with the exception of Wednesday, when it got really wet and only a few were achieved. At a rough guess, they've done about a third so far.

The pipe leading up to the drill is the feed for the cement, which is pumped up from a hopper below.
In the foreground, you can see numerous pipe ends sticking out of the ground. They have yet to receive their caps. 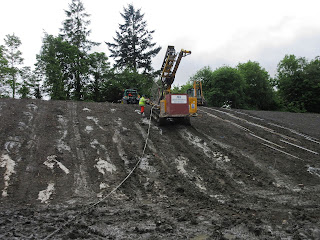 Here's a picture from below. To the left, numerous bits of rodding stick out of the ground, work already done. Above is a tractor with a winch. The slope is now so slippery that help is needed from above with a hawser to keep the machine from slipping all the way back down again, despite the caterpillar tracks. 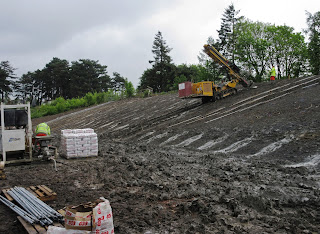 You can see the state of the ground at the bottom here. It's been raining, see?

In the foreground is a row of nails already achieved; they decided to do the bottom ones first, after a while.

On the left is the hopper and the pile of bags of cement for the pump. 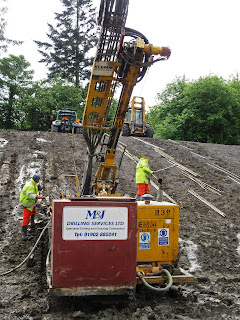 Here's the drill back down at the bottom, and the tractor on top pulling on the hawser.

The man on the right has laid out lots of soil nails ready for use, and feeds them into the machine one by one.

The manufacturer of the machine, Klemm Bohrtechnik,  has a video here:
https://youtu.be/ktxEE-PHsbQ

It's a bigger machine, and instead of a bod holding the pipes, they've got a mini digger with something rather larger, and the whole thing is hydraulic, not mechanical. But you get the idea.

The guys on site reckon the job will take them 5 weeks, which is pretty good. After us, it's the turn of the SVR. Their river valley is known for its unstable ground. In 1952, a severe slip occurred at Jackfield, a few miles further up the gorge. You can read about that here:
http://www.bgs.ac.uk/landslides/IronbridgeGorge.html