Four signal posts were taken to Broadway today, and three of them were placed in the ground in their new locations in our new station. 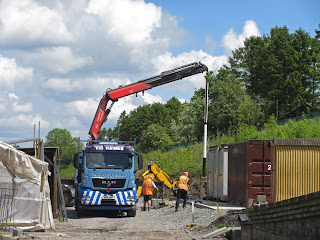 Things are starting to happen at Broadway north.
In a case of 'here are some we prepared earlier' four brightly painted signal posts were taken from Winchcombe to Broadway north, where Steve was waiting in the JCB, ready to dig the holes in the predetermined places. 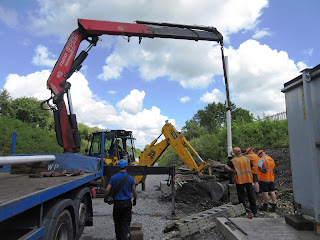 Two signal posts are going in next to the 'Future Maintenance Facility' containers.

Placing these is surprisingly easy. In a few seconds the JCB has dug a nice deep hole, the heavy HIAB on Vic Haines' lorry drops a post into the hole, the JCB backfills the hole and pats it flat. Job done. Max 5 minutes! 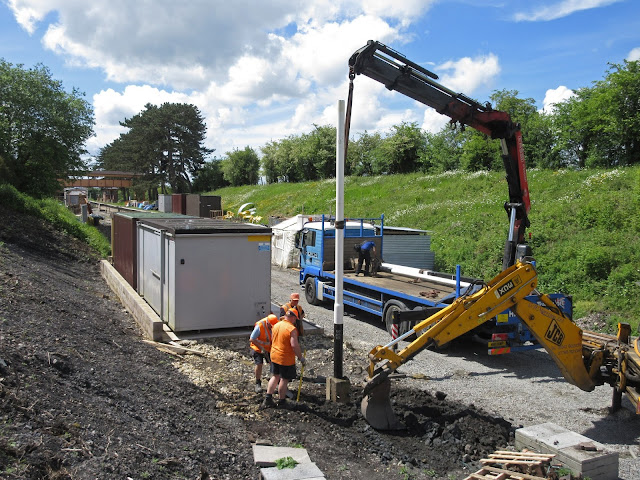 The weather was glorious, what a change from yesterday's washout. Here the JCB bucket is just patting down the second post, as the men from S&T check it one last time for level.

The two signals going in here, one on each northern end of the two platforms, are starter signals, although since the line will go no further for the time being, they will have short arms to indicate a shunt. 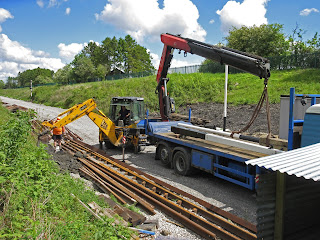 Steve then turned round and dug the hole on the other, platform 2 side.

In the foreground is one of the two turnouts formerly at Laverton loop.

All the rail and timbers from Laverton have now been brought to Broadway north, while the embankment by the good shed is in the hands of the soil nailers (who were working again today). 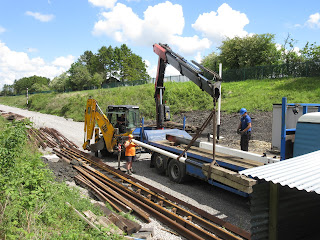 Steve has withdrawn here, and the second starter signal is gingerly lifted off the lorry and placed on the ground, for a repositioning of the slings. It's all done by remote control by the man on the flatbed - like a model aeroplane in fact. 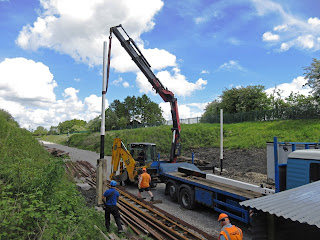 With the sling repositioned higher up, the signal post is lifted into position.

Rails stretch out into the background. 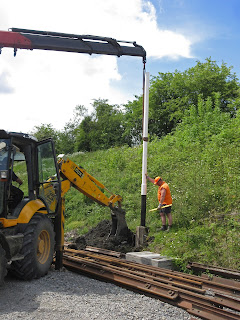 Finally the last of the three posts is dropped into its hole.

Neil is ready with the level. There is no concrete involved, these posts are already equipped with their own jackets.

As the ground settles around the infill of the holes, it becomes harder and harder, until they are quite stable. 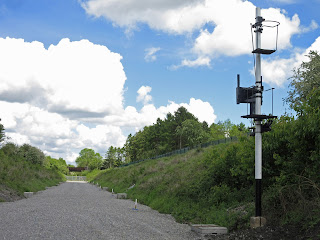 This scene is also starting to look very railway-like. About a thousand tons of type 1 and fresh ballast have been placed here, and now there is a new signal post for 'incoming ' trains. This one has an interesting route indicator, so that the loco crew heading south know which platform they are being directed to. The finial and signal arms have still got to be placed. In the background you will soon see two tracks and a crossover. 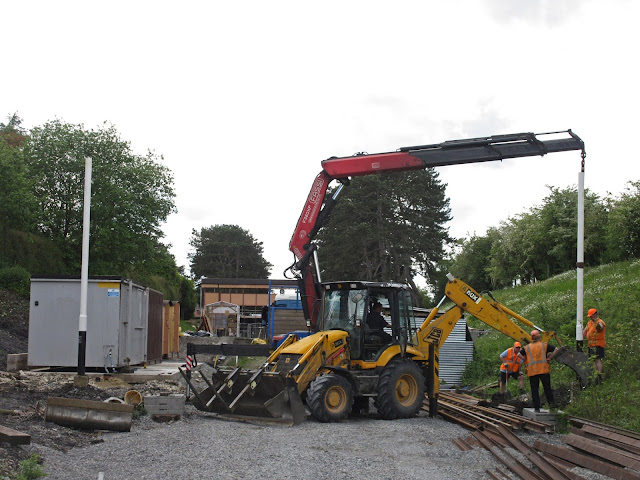 A final picture to show you what the two signal posts now look like, in situ at their new locations at the end of the two platforms.

There's one more post on the flatbed. This is an original wooden one, obtained from a member's garage, which will be located south of platform 1, to act as a starter signal. This post will have a concrete foundation, so it will be inserted at a later date. Today, the post was simply delivered to its future location.

In the afternoon the plan was to remove the shipping container at Hayles.

Following a tip off last week that there was a GWR waiting room bench in a local antique shop, we hastened to take a look. A bit sceptical at first, we were amazed to find that the report was true. There was the bench, covered in suitcases and an old blanket.
. 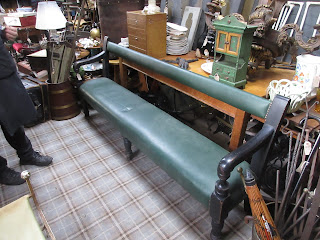 It is one of the rarer upholstered type, with the typical GWR arm rests at each end. It's been knocked about a bit over its 100 year life, but is still recognisable. The woodwork has been painted black, and it has been reupholstered in green vinyl. If we can find someone who is good at upholstery, we might be able to restore it to an even better condition. Its length of 7 feet is ideal for the booking hall at Broadway, where it fits perfectly against the back wall between the open doors.
The reported provenance is a pub opposite Swindon station. It seems that the pub acquired it from the station itself. True or not, we checked it with two experts, and they confirmed its identity. You'll be able to wait in comfort now, in true style, while your partner buys the tickets.