Just a quickie tonight, but the valiant PWay gang managed to get all the rails in today on top of the 400 sleepers we laid out. Should be about 17 lengths laid in all. Brilliant stuff, guys!

The first half of the day was characterised by high winds and squalls of heavy rain. Nonetheless an initial 7 pairs of rails were laid in, and fastened temporarily on every other sleeper. The gang then retreated to the mess coach at Winchcombe to dry out and sandwiches.

After lunch there was a remarkable improvement in the weather, and the gang returned, invigorated and with rather easier conditions to work in. 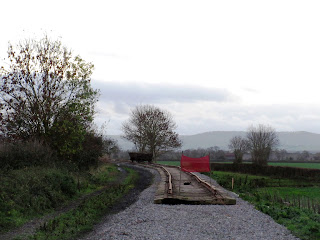 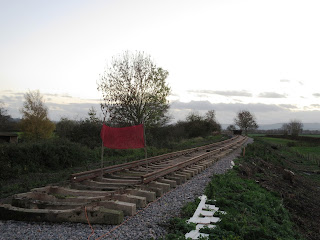 The good news is that they managed to lay all the remaining rails required to catch up with the sleeper laying again, about 150 sleepers short of Little Buckland Bridge. These pictures show the limit reached at the end of a long wet and windy day. Peace now reigns, but it was tough this morning!

In the background is the rail carrying bogie truck, with the spacer boards for sleeper placement in the foreground. 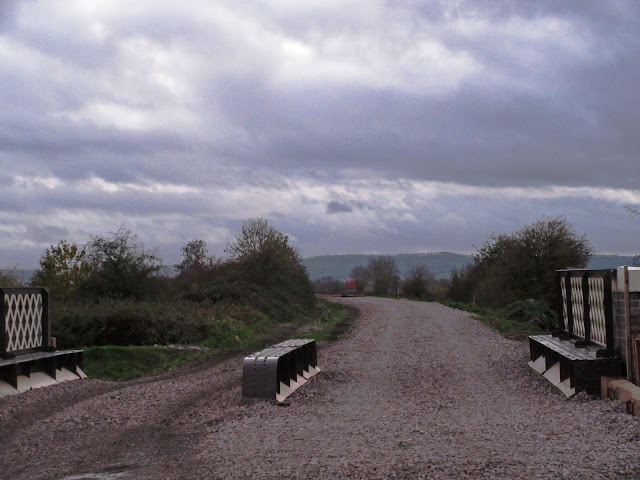 Here is Little Buckland Bridge, with the new rail head visible in the backround. Phase 1 ends at the spot from which the picture was taken. We have enough rail for this, then no more.

Phase 2 takes the line up to Peasebrook Farm bridge a further 800m away. Volunteers heard today that this is just one mile from Broadway, which happily matches the purpose of the vitally important share issue next Easter, Broadway - the last mile.

More ballast will be spread next week.