Back at Little Buckland today, with a dire weather forecast but high hopes of a second, larger dumper. Alas. No second dumper available, maybe tomorrow (a bit like the sign in the pub, Free Beer Tomorrow)

There was a new element today - mud ! The rain did indeed come, and the shuttles to the tipping area near Peasebrook Farm made a mudbath out of the trackbed, which resulted in great Catherine wheels of spatters being flung from the wheels. But an early start, all the materials on site and the tipping area now slightly nearer meant that we made great progress. 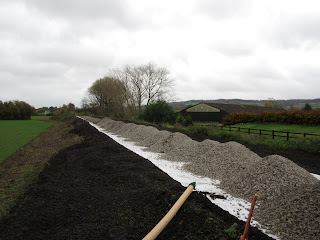 Steve was on site at 7am to oversee the delivery of a further 80 tons of ballast, which were tipped in the area we cleared yesterday.

By lunchtime - picture on the left - we had moved these loads away again, thereby allowing us to make the original long pile somewhat shorter still.

Steve also levelled out yesterday's tippings, as you can see in the picture. The ballast piles in the foreground represent new material brought up this morning.


After a while Steve was called away to fill the PWay train of 6 Dogfish at Stanton, which they are using along the running line to supply the tamper which is arriving shortly. Adam took over in the digger, leaving yours truly to drive up and down with the loads and rolling out the Terram in between. 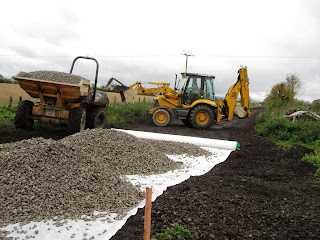 After lunch Steve was back, and we see him here clearing some concrete sleepers that were in the way of the non-terrammed track side. 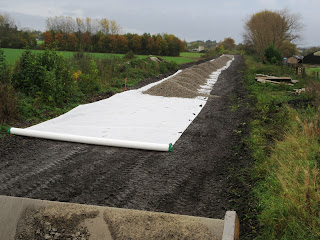 More and more piles were dropped today, about 44 in total. This gives us another 120 meters of ballasted track, or about 2 tons per meter length. We need a depth of ballast sufficient to prevent the tines from the tamper penetrating the Terram underneath.

Steve will spread these piles out tomorrow morning. 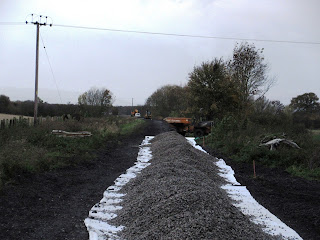 Here is the point we reached at the end of the day, you can see that it is getting dark.  There is probably another 3-4 days work here. Our base with the ballast and digger is seen in the distance at Little Buckland bridge.

Various visitors came out to say hello, with interesting snippets. One bit of news is that a window has been found to lift in the rail into the 400 sleeper section laid out on Saturday last. This will happen in the next few days. If all goes well, up to 16 lengths could go in, thus advancing the rail head to about 6 lengths short of the bridge, say a bit over 100m. Quite close to the end of phase 1 therefore.