Slowly the newly ballasted section from Peasebrook Farm gets longer.We put in another good day of dumping today, bringing the end of the ballasted section to within a stone's throw (!) of the supply pile at Little Buckland bridge. 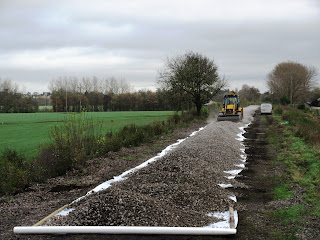 The tree marks the half way point,and you can see that at the start of the day we are well past it. It was breezy today, with the forecast giving 'moderate to strong' winds. We had strong. There is no shelter in the Vale, with the trackbed at this point on a rising embankment so we were well exposed. OK for Steve in his nice warm cab, and his parting advice to yours truly, before he set off to grade the piles, was to reverse back to the ballast pile, because going forwards as before exposed the driver to a sandstorm of sharp dust particles. And it was true - one forward return trip was enough, the others were in reverse. Steve knows best! 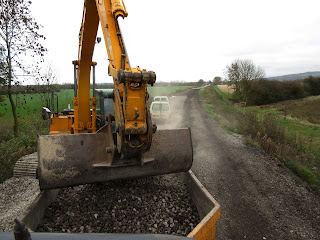 Filming the dust wasn't easy, maybe this shot gives an impression during loading?


The other issue with the wind is that the Terram won't stay down. You roll it out by kicking it along some... 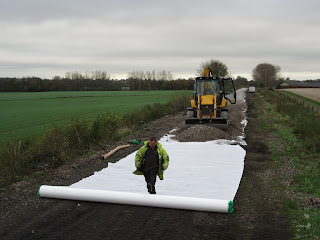 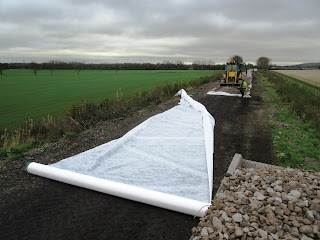 ... then turn round to go back to the beginning, and this happens. Dang ! Originally we were given a set of giant staples with which to spike down the Terram, but in practice this didn't work very well (staples bent, or wouldn't go in due to stony underground) so we took to using lumps of anything we could find along the way to weigh it down. 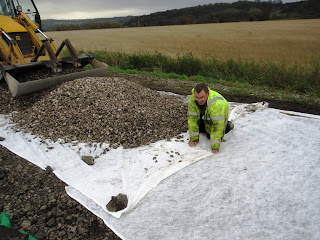 Finally you find yourself on your hands and knees, trying to keep the stuff down - it has a mind of its own, and keeps ballooning up.


A clearance contractor was on site as well, strimming the fence line ready for a larger flail machine to do the embankment side.

Lunch was taken on the hoof (there is no site hut) but coffee was in the luxurious and warm interior of the company Estates Manager's 4x4, which drops in daily for a visit and a chat. Hot drinks were provided too, and 1980s copies of the GWSR bulletin for perusal. Fascinating stuff, did you know there had once been a derailment at Toddington of two locos at once? A steam crane from Gloucester soon got them back on the rails, but while waiting for it to arrive a visiting area manager suggested they drive themselves back on. Well, that didn't happen. 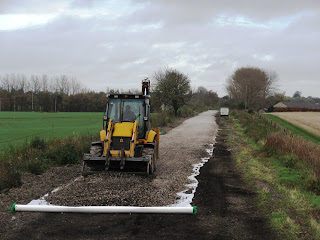 We laid about 100m of ballast today, until we ran out of supplies. Yes, the long pile has now gone, all ferried up towards bridge 4, six tons at a time. No quarry lorries came to us today, they were needed to resupply the ballast train at Stanton. With a bit of luck we can bag some more tomorrow, so that we can carry on ballasting on Thursday (the JCB being required at Broadway tomorrow). Here Steve is spreading out the last bits of it. The bit we have done over the last 5 days stretches out into the distance, about 500m of it. 300m to go behind the camera. 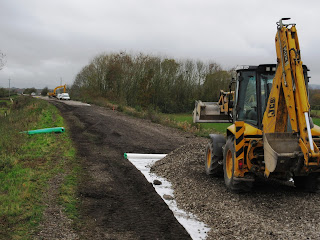 .... talking of which, we could just turn round and show you. This is how far we got today, the ballast pile is (was) by the 360 in the distance. That next roll of Terram should reach there nicely. 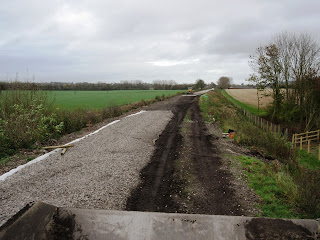 Two more shots form the ballast pile end for you:


On the left is a bit of trackbed with a small amount of ballast on it already, but it needs more. It was only put there, in a hurry, to narrow the pile to let vehicles pass through. 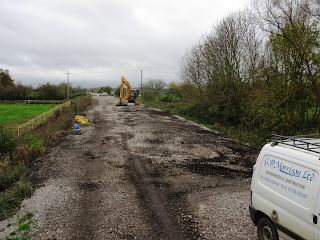 ...and the other way - this is where the supply pile was. Although more ballast is expected in, we will eventually have to lay Terram here too, and cover it with the required 8 inches.


Finally, a plug for a new Blog set up yesterday. It's for our valiant little Building and Services department, who are relatively little known, yet who have built so much around the railway. Check them out, see what you think, and you might even like to join them?

Here is the link: