Get up early, the scaffolders are coming! They are going to complete the scaffolding round the P1 stairs, where we have been unable to fit the boarding so far. 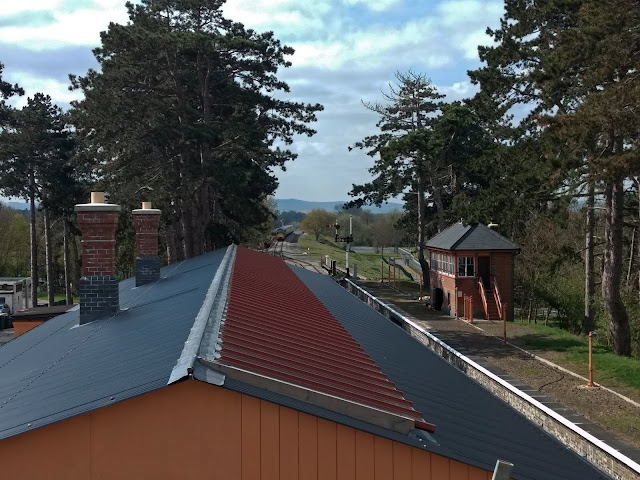 At the appointed hour the scaffolders didn't come, but this diesel hauled train did. Unable to continue with the woodwork until they came, we spent quite a bit of time photographing D6948 as it arrived with its trainee drivers, ran round, and pulled away again. 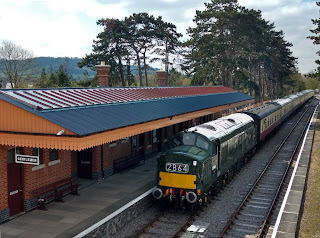 D6948 pulls into Broadway, seen from the footbridge. 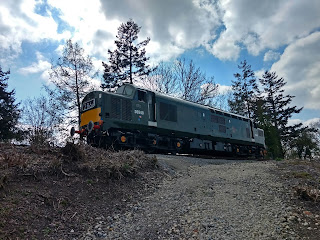 This shot was meant to be a lot more imposing, but the Growler, paused to change the points, pulled away before we could fully line up the shot from underneath. 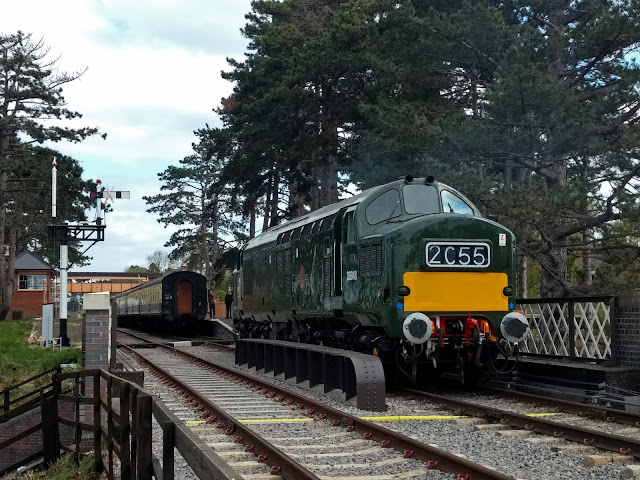 It then backed on to the train very cautiously.

The angry departure growl didn't happen, so no video (that is worth uploading). The train just pulled away on tickover. It's a powerful locomotive, after all. 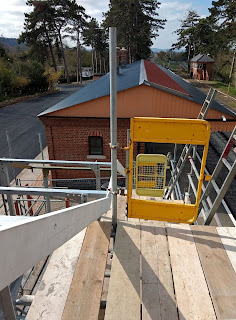 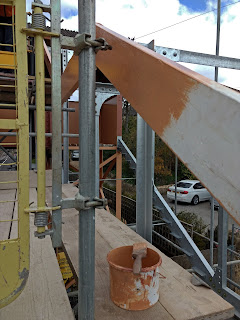 It was a day of waiting for the scaffolders, and painting the timbers already fitted in light stone undercoat. 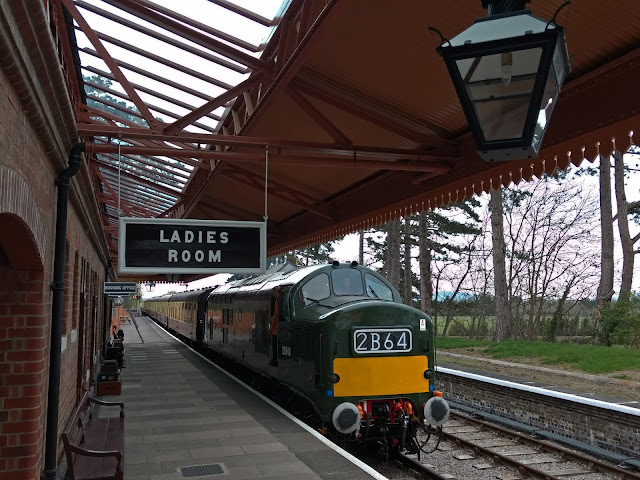 In between painting the Growler returned with a new crew of happy candidates at the controller. 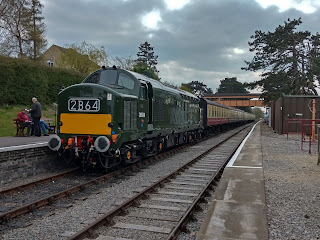 The train arrived a second time. These movements are not in the timetable so little known, and there were hardly any people about. 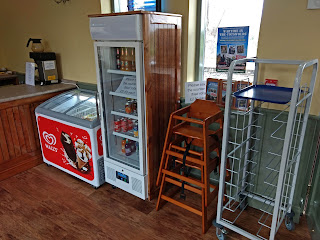 A look inside the cafe found that the boarding, beautifully made by C&W, had been fitted to hide the modernity of the chiller cabinet. 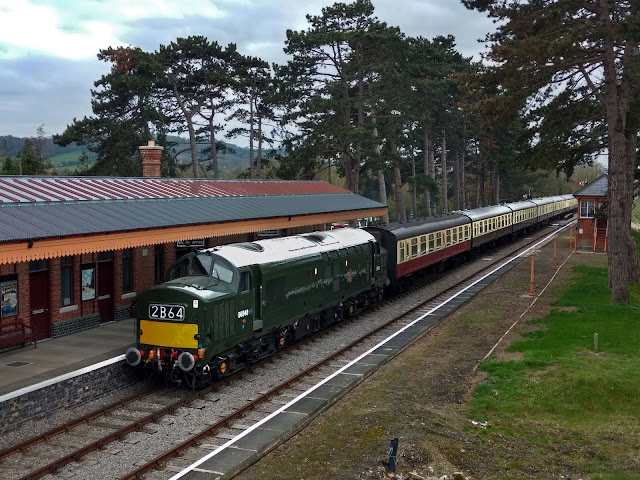 A third arrival took place mid afternoon, and by this time the scaffolders had come, somewhat unexpectedly by now. But count your blessings, they did what we asked and we can now continue fitting the timbers along the edge of the roof of the steps. 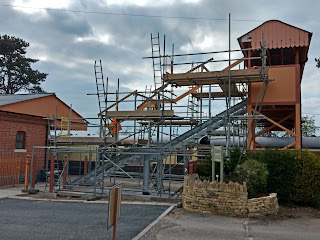 Here is the Cotswolds side of the P1 scaffolding, finally completed.

Note how the third level has been cantilevered out a bit, so that we can now work on the corner of the centre span. It was the upper, outer timbers that were holding us up, as their tops need to be integrated into the corners. 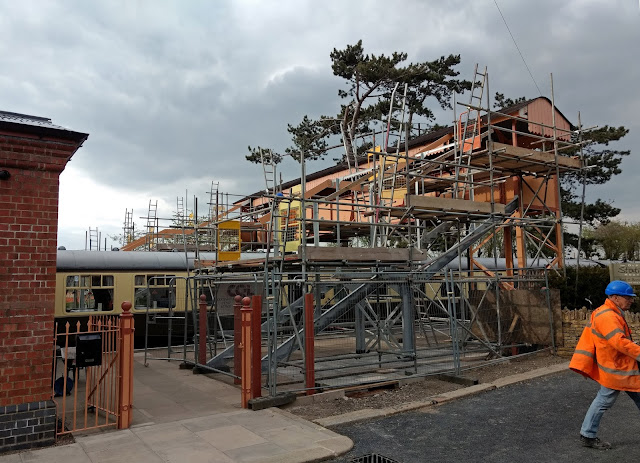 At the end of the day - can you see the difference? It's admittedly hard to make out.  The P1 steps are now fully scaffolded, and an extension has been built into the outer top level, on both sides. Three of the four runs of timber fitted are now in light stone undercoat.

Sunny today, but minimum temperatures and an icy wind. Hats were pulled down low over eyes, as we ventured out on to the exposed embankment at Toddington south to continue with the sleeper replacement on siding No.1.

The big wheels stayed in the mess coach at Winchcombe and went into a huddle, to which uz workers were not invited.

Diana enjoys a large bacon roll, obtained somehow from a passing train, we know not her secret.

Ill gotten gains are the best though, like stolen apples. 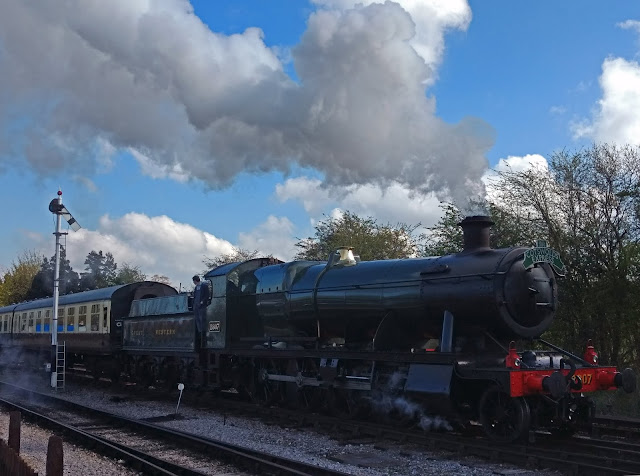 While we waited for clearance from the bobby to work on siding 1 - it still had the DMU waiting on it - we watched the first passenger train south leave the station. In general the trains seemed quite well filled today, and of course it's half term and Easter coming up.

One couple was observed at the window with a gin & tonic each - now that is civilised! 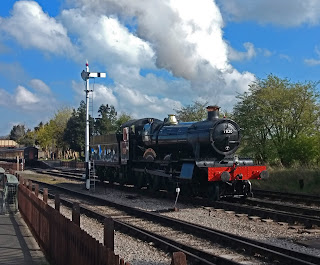 The service train with 2807, back on the road again after a hot bearing last Sunday, had hardly gone when Dinmore Manor shunted by.

Dinmore had been heating its train (in the background) and it looked like two steam hauled 8 coach trains were about to depart south.

In fact once the first service train had left, Dinmore stopped heating its train from the south, ran round, and coupled up to the north end.

There's a lot to see on the GWSR. 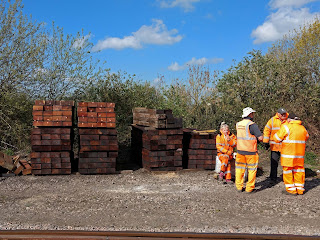 After the arrival of the Landie and other members of the gang we waited by the sleeper pile for the green light to start work. 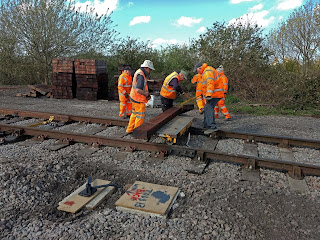 We helped ourselves to six of these new softwood sleepers that were left over from the main line relay earlier this year. They were dragged on to the Permaquip trolley. 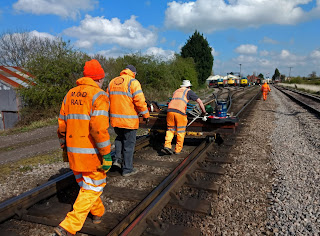 All the tools went on top of that too. We have so many tools that we need, it was a delicately balanced pile of 'Pickup Sticks' and it wasn't long before the front side of the pile slid off and into the four foot with a clatter. Dang ! 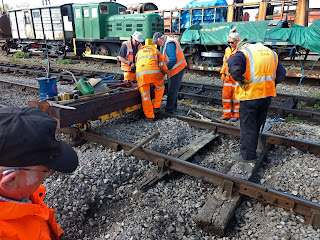 Our first candidate of the day was this one, and you can see why it was marked with an 'X' for removal. Not much left of it at this end.
Last week we gave ourselves a head start by excavating two more beds at the end of the day, so we had a flying start this morning. This one was ready to go straight away. 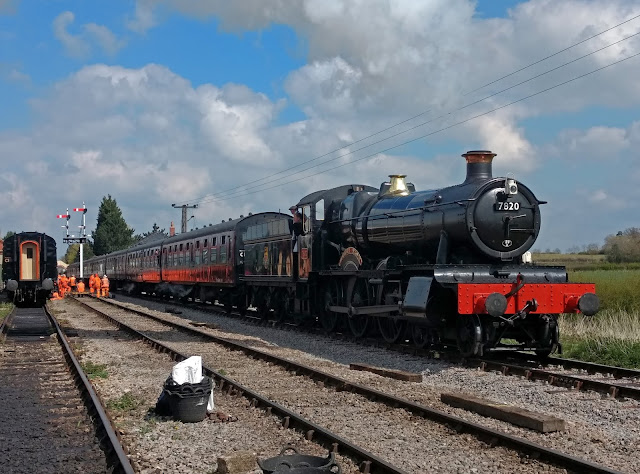 Periodically we had to stop and wave, like when Dinmore returned from Broadway, where, we noted on returning home, the new car park was well filled. 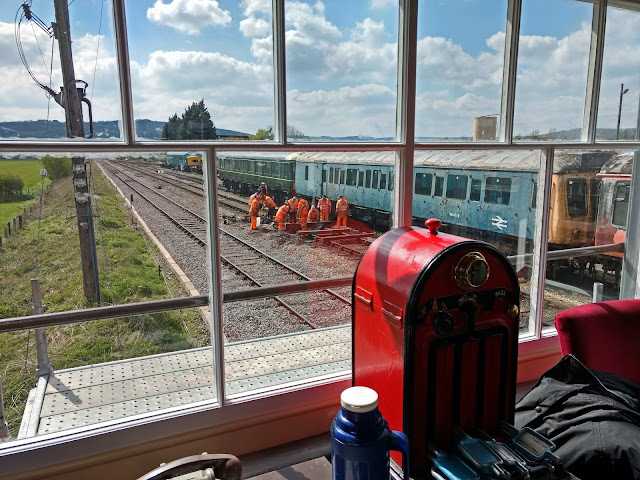 Just before breaking for lunch, we ventured into Toddington signal box for this atmospheric window shot.

It's polite to ask the bobby, a bit like asking permission of a captain to come aboard. Permission was granted, but whoa! What are your shoes like? We scuffed our dusty boots around a bit on a mat, feeling a somewhat guilty. A bit like Thora Hird telling Wesley (in Last of the Summer Wine) to come right in, it was his house after all, and then quickly laying a sheet of newspaper under each step he took. 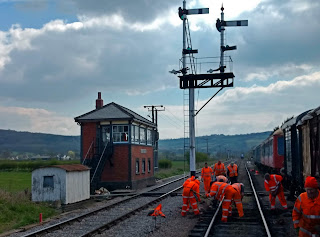 Lunch was taken in the mess coach, and crowned with two cakes provided by Bert Ferrule. There was a small worry that the 12 of us might not consume all 16 slices, but fear not - Dave 'Dangerous' was there and everything was hoovered right up.

After lunch we continued, and thanks to our brilliant start we were now past the signal box and in sight of the end. Well almost, there were 6 more sleepers to do, and they were all bunched up.

Four of them were in this row, and they were all GWR thoughbolters, so needed replacement chairs. From the far end of the yard, of course. Thank goodness for the Permaquip trolley, we got 4 more sleepers with it too. 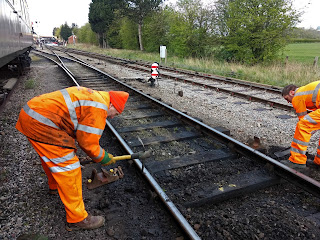 Finally, a brace of Steves here attacked the last sleeper to be replaced and dug it free. Next week then we will have another head start, and should be able to finish them off. Today we achieved 8 replacements, so just these 4 to go.

Then there are all the fishplates to review. One was so ill-fitting that it derailed the Permaquip trolley today. Well, it does have very small wheels, which have a tendency to do this with the slightest track unevenness. 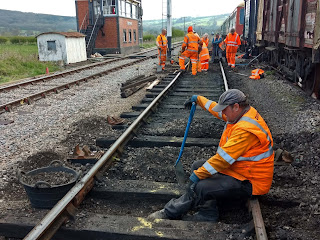 At the end of the day tiredness began to set in. But we had a great sense of achievement, the job is almost done, next week looks like the last day. We will be working on Easter Saturday, we stop for no-one! 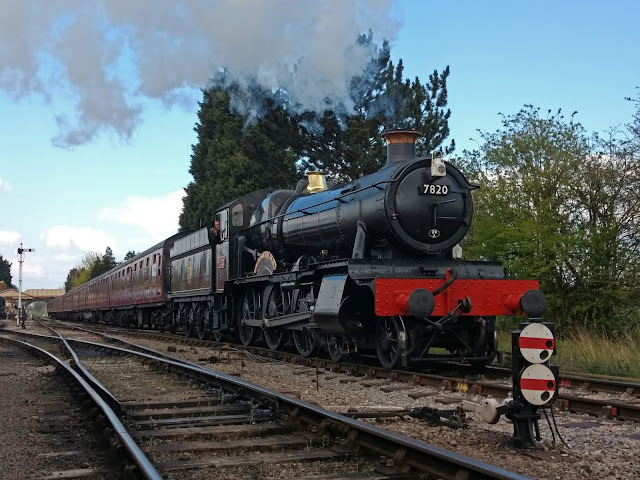 A last shot of Dinmore Manor, steaming well as she draws the long 8 coach train out of the station and up to the signal box to obtain the token.