Easter Monday, and lots of people on the railway. 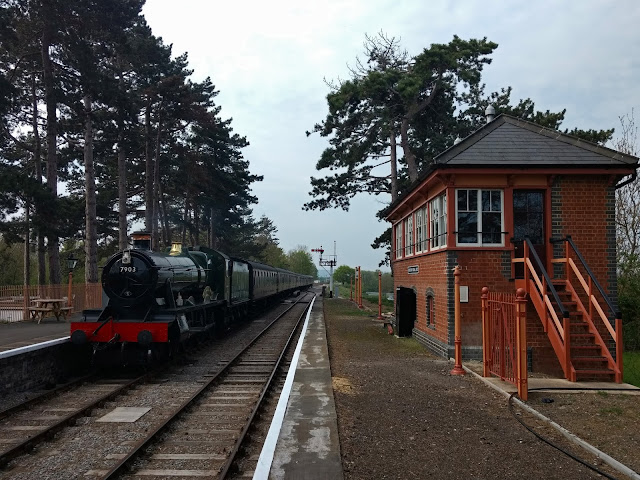 The first steamer rumbled in under a strangely grey sky, whereas full sun was forecast. 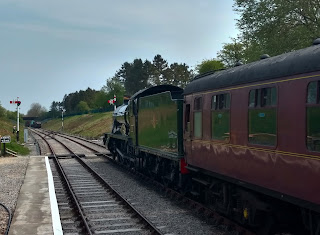 It paused on P1, seemingly intent on carrying on up the line. 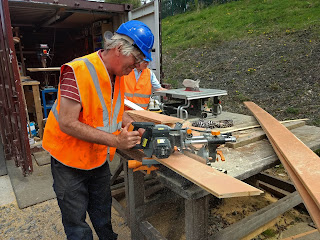 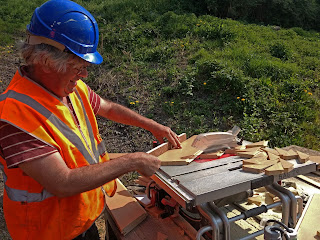 Neal cut himself several lengths, and then proceeded to trim the bottom ends to a sort of off-set triangular tip.

We said before that these dagger boards are a bit weird, as they rise and fall on the steps. 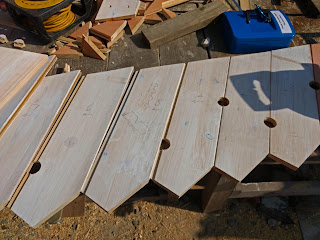 We put a few test ones together. On the right you can see how they rise, and the holes sort of bounce up and down as they go up. Each board has two half holes in different places.

Put two boards together though, and suddenly you see how it is meant to work.

There was a remark about bending the corrugated iron on Saturday's blog. To explain - a pictures tells a thousand words - we think it easiest if we show the 1904 opening picture (which isn't the opening day at all, but the day after, when there was an excursion to Stratford, hence the queue). 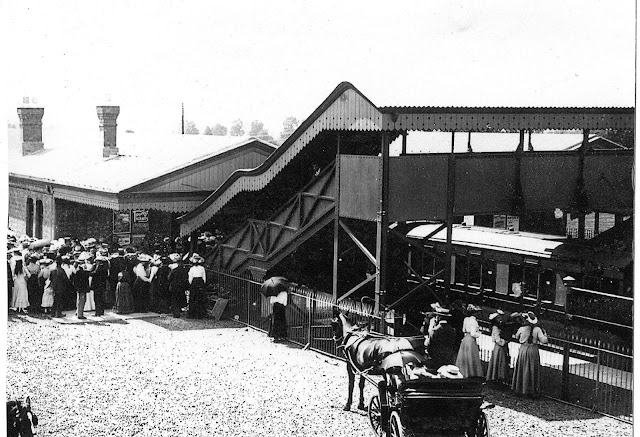 Check out the roof line of the steps, it curves. The dagger boards follow it down, with alternating holes that level out at the intermediate landing, and then resume.

This picture also shows the original canopy overhang, and a vast crowd underneath. It was the original entrance to the station, and you then had to go down the platform to the booking office to buy your ticket, then come out again through the same door. Not handy when there are crowds (which Broadway only ever had once, on this day!)

Under the canopy overhang you can see a quad poster board. That has 4 standard posters on it. We can't replicate that, as the builder put a window in that wall. A similar quad poster board can be glimpsed in the same spot on the P2 building end wall, just visible under the centre span.

The surface of the forecourt can be seen to be gravel. The forecourt was big enough to drive up with your pony and trap, do a U turn and set down your passenger. That's all - no parking in those days. 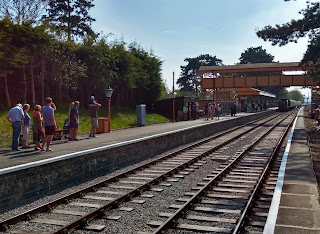 Our platform today was a bit less busy than the day after opening, but our business is regular... this is the second train coming in (Red timetable, two steamers, and one DMU). 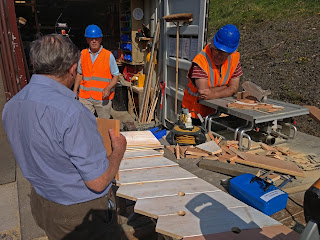 Neal is cutting to boards to size, while John is cutting the holes. Those two activities took quite a lot of time to set up.

Brian (in the shop today) came over in between trains to try out what we had already made. 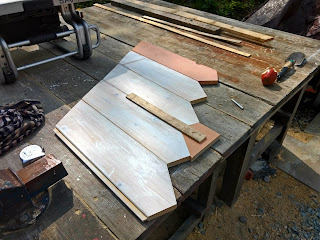 For example, they made this guide up, which also shows what sort of bits they cut off from a square end. 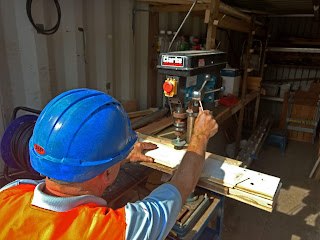 John on the column drill, finally equipped with the right sized bit. It was worth waiting for.

It's just like  'Balham - Gateway to the South' and Peter Sellers explaining his craft of 'Toothbrush Holesmanship'...  John here displays dagger board holesmanship. 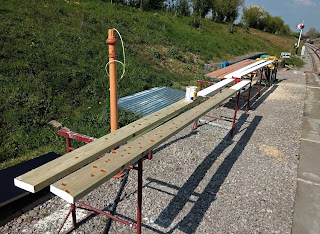 With the T&G painted last week and used on Monday, it was time to ready the next lengths of wood that we will need.

These are stout timbers that will form the cross members of the roof of the steps, and on these the corrugated iron sheets will rest.

They were primered today, and once that was dry, we put on a first coat of light stone undercoat. 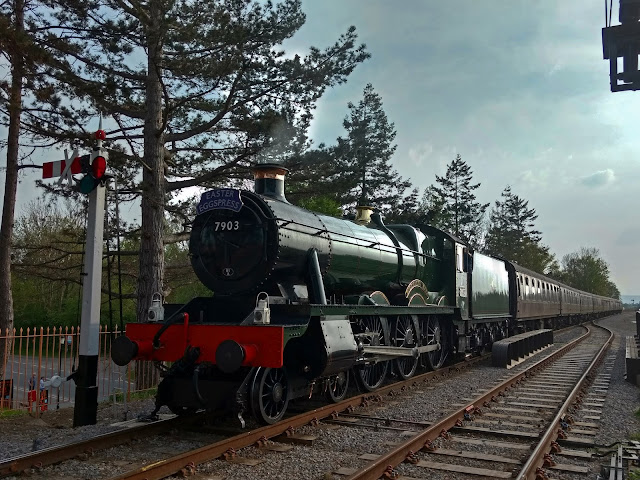 The last train to rumble in was the 17.06, which would do a return to Toddington only.

There's no glint, OK, but still a nice reflection on this late afternoon shot.

An unexpected opportunity came up to acquire some big bull nosed edging bricks for a friendly price. Tyseley had salvaged them many years ago, but now can't really see a use for them. We have some ideas for them, although we are also pursuing other options. Ultimately they will go either along the Usk goods platform, or round the turntable. You have to seize the opportunity when it comes up, as they don't come up so often (in a state where they are actually available). 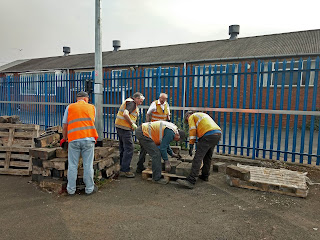 We are going to have them collected by a haulier, but as they are their pallets have completely disintegrated and are in no fit state to be moved, let alone lifted.

The purpose of the day was therefore to re-pallet all 470 of them. Quite a job, they weigh 25 Kg each! 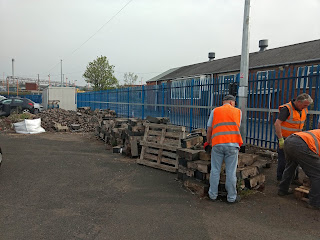 In the top picture, we are starting out with a new pallet.

In this picture, you can see a whole row of bricks that we have to shift. It's probably 12 tons of them in all.

How long would all that take? Perhaps 2 trips over 2 days? Better get going then. 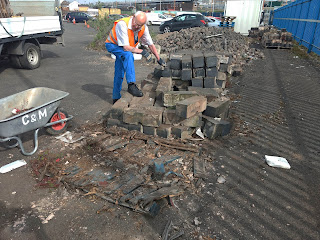 The state of the existing 'pallets' can be seen in this picture, after we took off the bricks it once carried. Just dust and mouldering wood remains, and a dead rabbit under one. Yuk ! 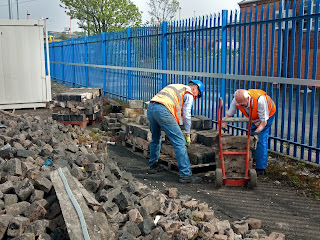 Half of the old pallets were on the wrong side of a large pile of cobbles, but we had thought about that, thanks to Jim's prior site visit. We had brought with us two sack trucks, and they were just the thing. 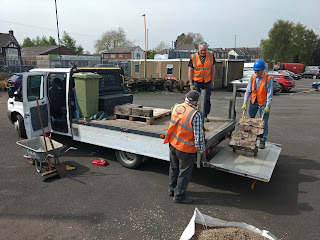 We decided to take one new pallet home, to get the ball rolling. It's all our transit can take.

Luckily it had a tail lift, so several sack truck journeys ended up with a comfortable ride up.

Jim is receptionist (of bricks), Roger is on sack truck duty and Neil - well, he put his finger to good use with the 'ON' button. 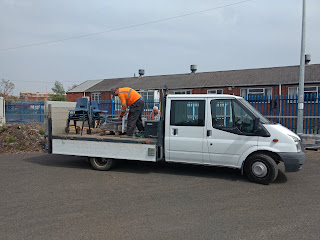 Dave climbed on board the truck and shrink wrapped our take away pallet. Normally we gave a pallet 40 bricks to make a ton, but watching the rear tyres compress we thought better of it for the Transit and gave it only 28. You never know. 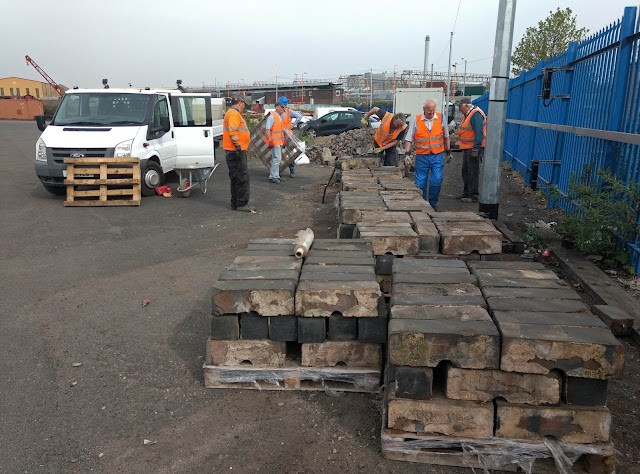 On the stacking side we were making good progress. We had an amazing 7 volunteers (after a slow start and some pleading) and thanks to this good number the job didn't take two days, but two hours. yes, hours! We were finished by lunch time, so had a good picnic, a good old chinwag, and the opportunity to feel very pleased with ourselves.

Here are all the new pallets, 11 of them, and a 12th on the Transit. They are shrink wrapped and ready to be loaded. 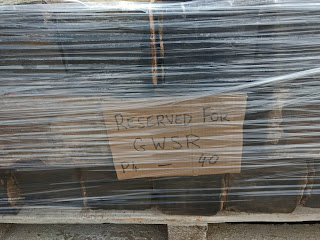 Each pallet was carefully labelled, we didn't want any to go missing. 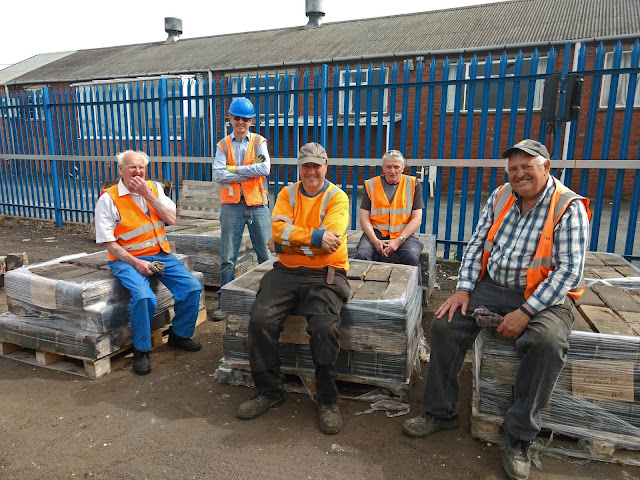 Here is the team of 'lifters' who lifted 470 x 25Kg bull nosed bricks and stacked them somewhere else.

For Wednesday's activity, check out the Heritage Herald blog.