A good, dry and not too cold working day for us. Unfortunately the morning was a bit of a write off as two of us were in a meeting, while the third (a-hem) had a rare appointment with a plumber, and rarer still, he turned up ! So we made a very late start. 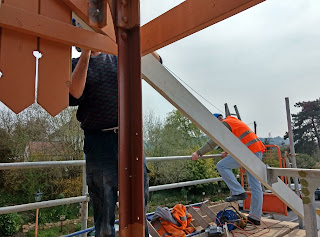 Just before lunch we all met up on the platform, and thought we'd get an hour in before attacking the sandwiches.

With the scaffolding now cantilevered out, Neal was able to make a start on fitting the outer, upper boards to the corners. We spent some time making room for the last board; it took a while before we had that sheet of corrugated iron off.

With the sheet stored in the centre span, Neal was able to cut into the corner to fit the upper length of timber. 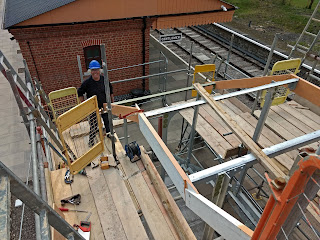 And there we have it, at the end of the afternoon the three missing boards on the forecourt side of P1 were fitted.

A beaming Neal can be seen looking at the camera, proud of his work. 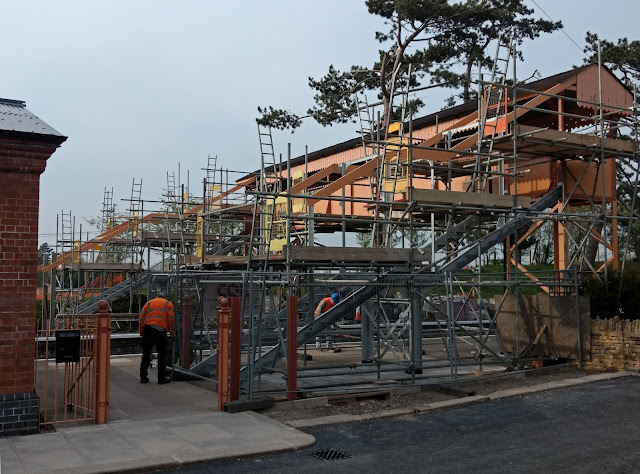 In this overall view, taken as we were tidying up, you can see that all but one of the timbers for the roof of the steps have been fitted, and indeed primered and put in undercoat.

What are the next steps then? In principle the fitting of the dagger boards, up and down the steps. They are a bit more complicated than those along the canopy, there are 4 different types to make. The dagger boards will be produced by the Broadway gang, and as soon as they are ready, we will fit them.

If there isn't (yet) a supply of dagger boards next week, we will be fitting timbers across the roof boards, and these will support the corrugated iron sheets when they go on. And of course we have the final timber to fit on P2.

Now, looking forward, the station needs some fire buckets. We have a location for these, which is up against the wall under the canopy extension. Here they are out of the way, yet accessible in case of fire. They will be in the dry, so not prone to rusting or leakage. 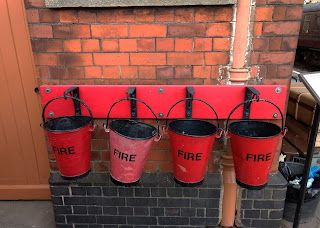 This is the rack at Toddington with 4 of them on, and this is what we would like to reproduce at Broadway. 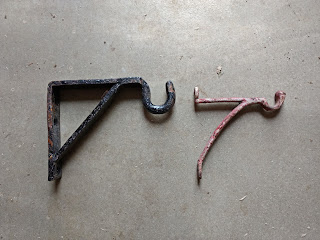 Over the years we have accumulated the parts for such a rack, but they are not all the same.

In fact we have enough brackets, but they are of three different designs. Some are welded steel, some wrought iron, and another is cast. 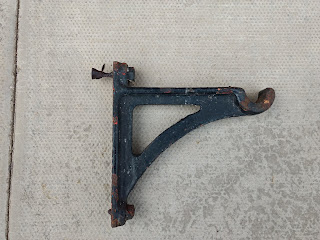 Our question to readers of this blog is, is there anyone out there who can give us one or more of any of these brackets, so that we can try to assemble a set of identical ones?

Possibly we could swap?


We already have three original fire buckets, thanks to two donors. One even has GWR embossed on it. We need one more. Note that fire buckets are a bit longer than normal buckets. Anyone out there who can help us with a spare? Email: breva2011 (at) hotmail.co.uk


History corner:
On the Early GWSR Flickr site more of John Lees' track laying photographs have been scanned in and published.

You can see the latest batch on pages 7 and 8:

17 years later, the first PWay train (with many of the same gangers) rumbled into Broadway!

More news on the Winchcombe goods dock on the Heritage Herald blog: