No, not of this blog (although a short jolly to Scotland on the Statesman is planned for this weekend) but it's a reference to the last gatepost used at Broadway. For the time being anyway, until we buy some more for P2. 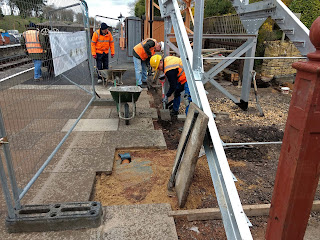 Friday saw a joint effort between the canopy team, and the regular gang from Broadway. We planted the last 2 posts, and a start was made on slabbing underneath the steps. 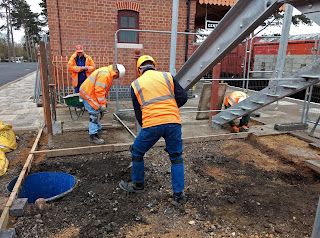 A start is being made on the end nearest to the building, so as to cover the area underneath the bottom steps, before the scaffolders come in 10 days or so.

A lot of time was spent on grading the ground, and removing high spots, such as those in the concrete around the newel posts. 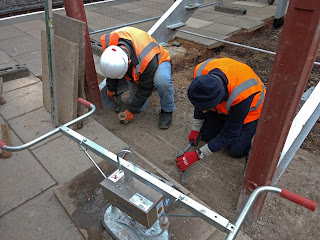 Rod was plugging away manfully but making only slow progress, until Keith jumped in and doubled the chipping speed.

Four volunteers then walked the two posts from their storage area by the footbridge tower, and tipped them into the two holes with the concrete poured into the bottom the previous time. 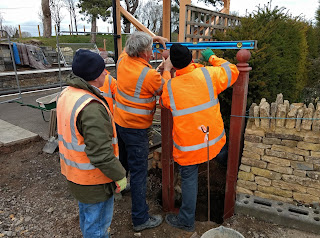 When both posts were more or less vertical, they were checked for level.
Half an inch difference! Oh-oh.

The lower post on the left was packed with pieces of slate until the level gauge said 'yes'.

A distant toot told us that the train free Monday wasn't train free after all. 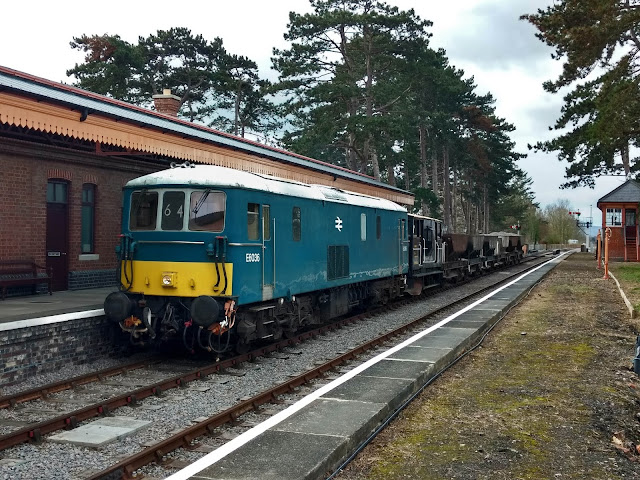 The class 73 rumbled in with the ballasting train. This was followed by much shunting, and running to and fro between the levers in the signal box, and the northern siding. 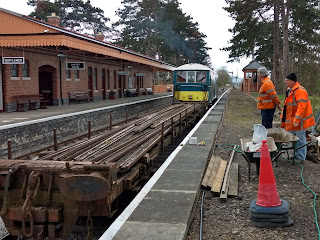 The ballast train was parked, and the bogie flat with the rail on it came out of hiding.

John here spent half the day on P2 building the supports under the bottom of the stringers with more bricks, and then concrete blocks. 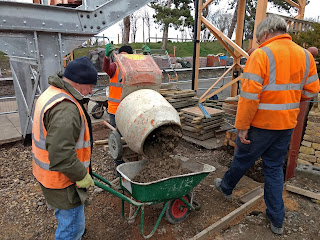 Back on P1 Minnie the Mixer coughed up a barrow load of concrete for the two gate posts placed earlier in the day. 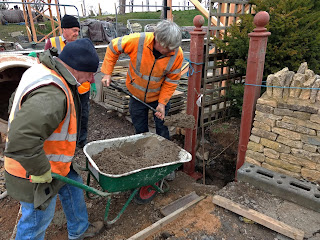 Neal then shoveled the concrete around the bottoms of the posts, and after some last minute adjustments they were well and truly in.

Now to wait for the concrete to go off, and then the measurement for that short piece of spearhead fence can be taken. 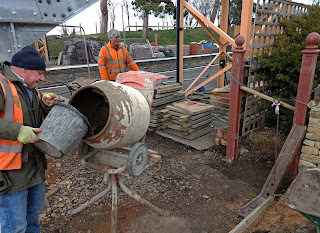 Mid afternoon the two posts were in, and looking good. Neal stepped back to check that they were right. You can see quite an arrangement of string, bits of wood and a rail end holding them perfectly in place.

We're having a last blast at fishplate greasing, to get as much done as possible before trains start running again on Wednesdays.

We need to do the whole line every 4 years, and it's not a fun job. Today we were lucky with 12 volunteers, although on a non-fishplate greasing day we can be as many as 22. Mysterious, that. 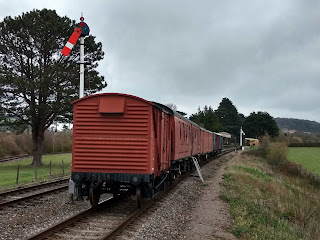 We had our PWay train with mess coach stabled at Gotherington.

This meant that we had access to everything we need right on site, which was just as well, as we found a cracked fishplate, which we were able to replace on the spot.

We parked our cars at Skew Bridge and walked through the station to the train, where the early arrivers made the tea. A couple of packets of Jaffa cakes went down well, but gosh, aren't they small nowadays. Very disappointing.


After most people had arrived, Clive gave us a brief lowdown of the At The Races trains.

These, with an extra train from Broadway this time, were a great success, both for the race goers and for the railway. We earned good income from the charter fees, as well as on board refreshment sales. All in the low season too.

Then it was time to unload the tools. It was a bit special today - the vans stood high up on the track, and we had to use doors we don't usually open. Getting in without a ladder was a challenge, our usual ladder was out of reach on the other side. 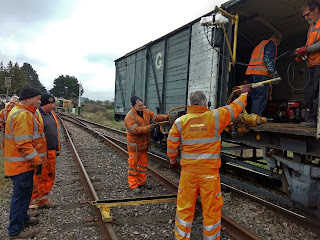 Luckily the hoist for the heavy stuff works both ways, so we were able to drop down the TB2s straight on to their trolleys on the loop.

Today's starting point was right by the last wagon. We did the main line earlier, and today it was the turn of the loop. 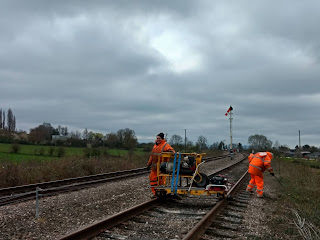 This little snapshot shows Peter and John half way along. The brambles on the right were throwing out long tentacles and burying their heads in the ballast, and we tried to thwart their efforts by yanking out the ends of the tentacles that had sprouted roots.

The day was overcast to start with, and while we heard several large, heavy aircraft passing overhead, we could not see them. Two gang members at Winchcombe, where they unloaded another shipment of s/h BH concrete sleepers, reported that they were indeed B52s as we suspected. 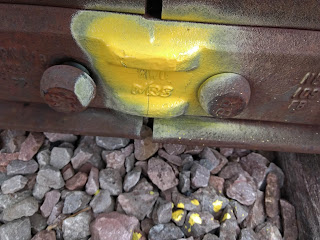 And here is that cracked fishplate that we discovered. You can see the crack travelling upwards from below, the classic pattern in a dipped joint.

We changed this side for a new one but not without difficulty as the gap was a large one, and the bolts in place were already 'S' shaped. 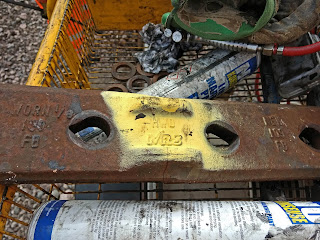 The combinations of 'lifter' fishplates are almost endless, and some of the rarer ones (as used at Broadway) are so unusual they have to be specially made for us, at great cost. It's one of the drawbacks of using mostly second hand materials, it doesn't match. 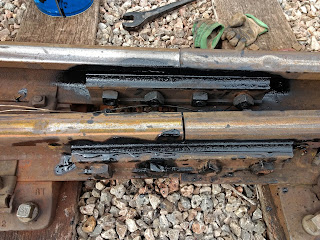 This set of fishplates is trouble, as it sits by the crossing of a turnout and the nuts are on the inside, so the TB2s cannot be used to undo or tighten the nuts. We got there in the end. 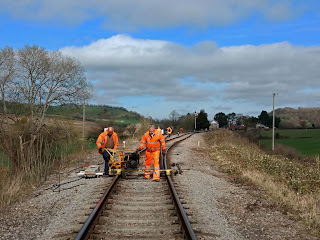 By about lunch time the team had made it to the end of the loop, with the do-er uppers just rejoining the single line. Behind the camera, the greasers and the undo-ers. Gotherington signal box can be made out in the background.

For lunch we trudged back to the train several hundred yards away. 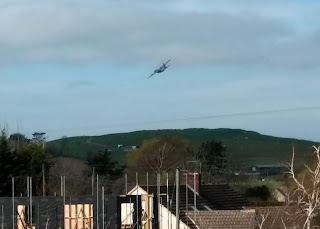 When we returned, we were wowed by the sight of this low flying Hercules. It had a large Union Jack covering the rudder, which made us feel very patriotic.

The Hercules roared overhead and then banked steeply, to fly down the valley of the Severn. 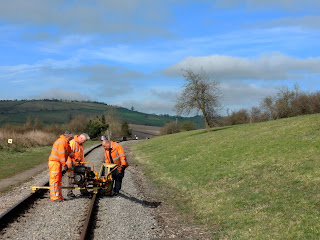 Our time on site was limited by the appointed hour for removing the train back to base, to avoid any risk of burglary or vandalism. Here we are coming off the curve from Gotherington, with our Manor Lane access point on the rear left. The lawned area on the right is being kept beautifully short by the drainage team, we believe to see what effect this has on weed growth. Certainly none of those awful brambles in there now.

Given that the train pickup was arranged for 15.30, we stopped at the end of the curve by the Gotherington fixed distant signal. From here it is a straight line down to Bishops Cleeve, about half a mile away. We intend to address this section in a week's time. 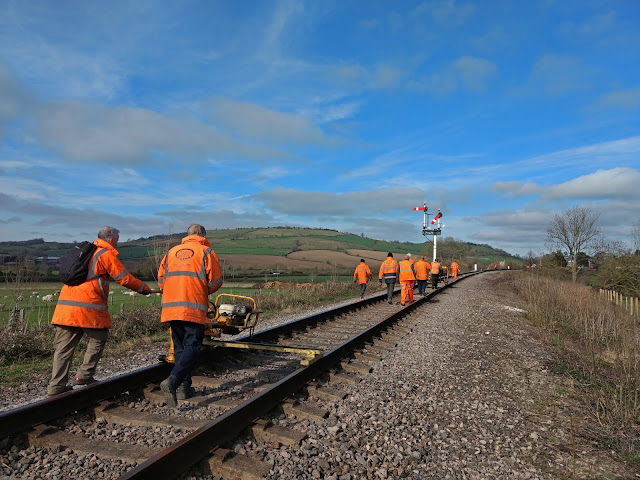 Wearily the whole gang pushed their respective machines all the way back to the start of the loop. The countryside is very beautiful here, but for how much longer? Huge housing development at Bishops Cleeve is moving northwards and has arrived just behind the camera, two fields from Gotherington. 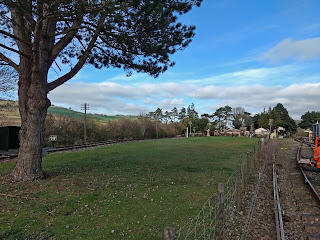 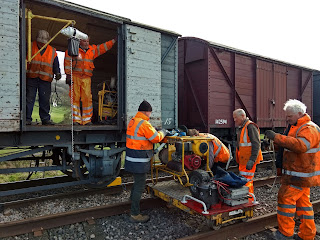 At three o'clock we arrived back at the train and started loading the compressor and TB2s back into the wagons.

Strange cries came from the other side of a field below the embankment on which the train stood. Not unlike seagulls, which have been seen here since the storms, or even sheep. But they also sounded like cries for help.

Your blogger made his way down the embankment through the brambles, through a barbed wire fence, a stream and two more barbed wire fences to the far side of the field below. There was nothing there, however. Strange. After a long silence came another cry for help, this time quite near by, and there was the source, a damsel in distress. It was a lady walker stuck in the mud, the deep, glutinous variety that builds up in gateways where cattle congregate. She was covered in mud right up to her waist. 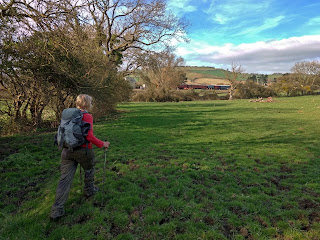 Relieved to see us, she took our offered hand and we led her to firmer ground, from which she was able to continue her journey.

On the photograph you can see a tiny line of orange dots in front of the train in the distance. It's the rest of the gang, observing the progress of your blogger on his apparently fruitless mission through the brambles and mud.


Plenty of shouted advice was offered, although little physical assistance as such. There was plenty of banter on arrival though. 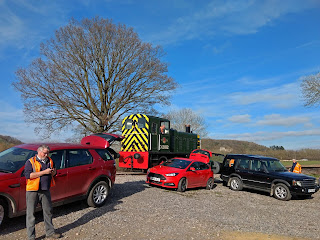 We assembled back in the car park at Skew Bridge, just as the 03 trundled by to pick up the train, perfectly on time. 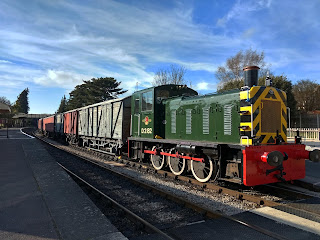 Soon afterwards the shunter had brought the PWay train back to Winchcombe. Here we noted the arrival of sand and concrete blocks for the construction of the little goods platform by the Usk hut-to-be-built. A 60ton crane had also come to disassemble the bramble covered pile of turnout components in the yard for removal, but due to circumstances part B of the plan was not carried out and the lorry to take away the materials (belonging to a third party) did not arrive.

Better luck next time, it's beyond our control.
Posted by Jo at 20:31