A superb sunny day, and a full turnout of members of the gang. Free cakes and tea, we eagerly consumed.

'Now that I have your attention, we are doing fishplate greasing today' - Dang ! 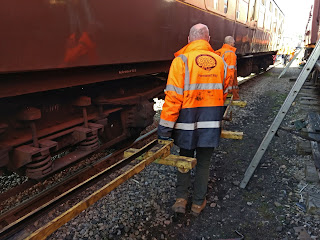 Good naturedly, as is our wont, we loaded up the two Landies.

It takes two people to carry one of the TB2 cradles, but you can save one volunteer by sticking Jules in the middle between both. 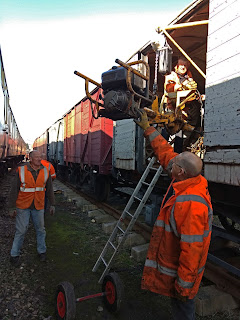 Then the heavy guns came out. Of course, only if you can start the generator to power the lift.

It does help if the generator has a full fuel tank. The diagnosis is easily made, but not until some fruitless pulls at the starter. 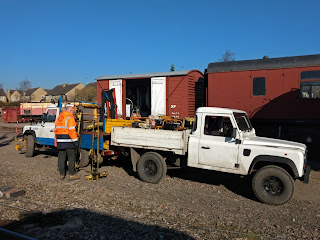 It's quite a long process. No, not the tea and biscuits (although....) but the loading of the two Landies with all the fishplate greasing kit.

TB2 for undoing the bolts, TB2 for doing them up again, a cradle for each, a Permaquip trolley, a mobile compressor, the spray kit and its pressure vessel, and the normal tools of the trade such as bars, jemmies, spanners, a liberal supply of grease etc. 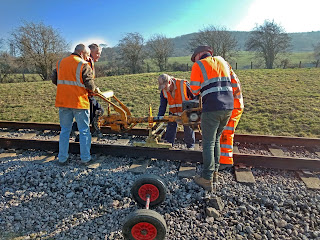 Entrance to the line was made at Manor Lane, Gotherington, and the plan was to work north from near there to the point where we left off last time (just north of Gotherington station). Then back again using the loop to the point of departure.

This is within sight of Bishops Cleeve, albeit a very distant one at the end of a long straight. 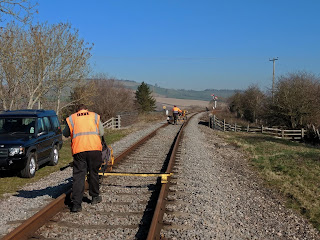 We then set off to the point of departure, the south end of the loop. TB2 in the distance, then the trolley with the compressor on it and the grease, followed by TB2 (2) to do everything up again. 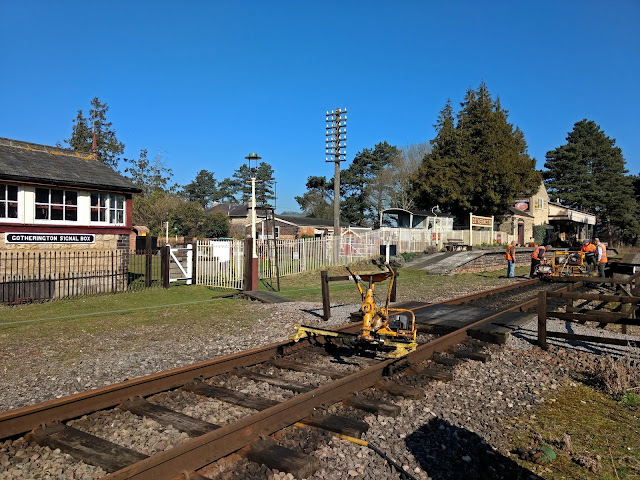 We set ourselves a little target of lunch in the platforms of Gotherington station. What an ideal day for a picnic too, gone are the heavy winter jackets.

It was a slow start, as a fair bit of the main line here is laid in short 45 foot sections (instead of normal 60 foot rail) so more joints to do for any given distance. Then, on to the 60ft lengths, faster progress, and even a few 'freebies' in the form of insulated joints, which we don't have to do.
Precisely at lunch time, and under a brilliant blue sky, we reached the platforms at Gotherington. 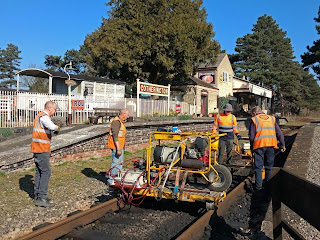 Here Dave and Jules are just undoing the first joint inside the platforms, while the greasing team and their compressor on the trolley look on, waiting to do the two joints. 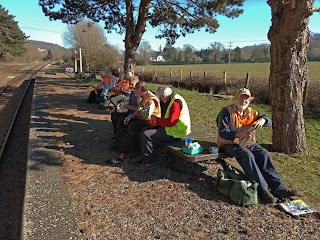 Isn't this a wonderful pace along our line to sit and have a picnic! Somewhere to sit, a bit of shade, and a lovely restored station to admire on the opposite side.

That pine tree in the distance is the target, the place we reached last time coming south.

After lunch, the gang, slightly reduced by two members who had meetings in the afternoon, plugged on, reached the pine tree, and made a start on the loop heading south again.

Another smaller group started the day at Broadway where a set of fishplates was changed, and then headed for Toddington where two ballast drops were done. 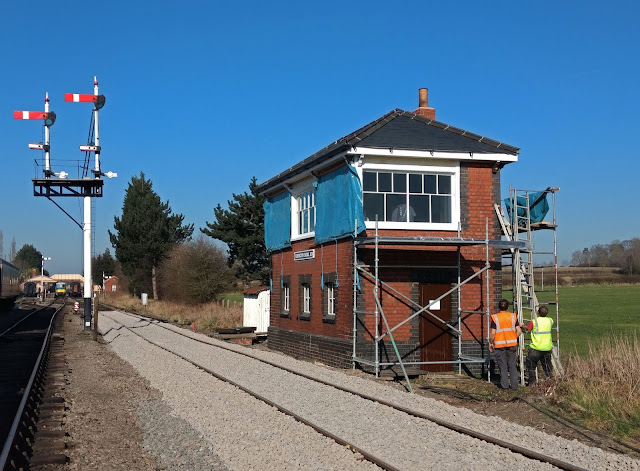 Thanks to the removal of the scaffolding trackside, the last new sleepers could be pushed into place and the first train trundled over the winter relay section.

You can see the class 73 in Toddington station in the background, where it was waiting for Stevie to fill the Dogfish a second time for an additional afternoon drop. This section can now be tamped, ready for opening on 9th March.

The replacement signal box windows are looking good too. 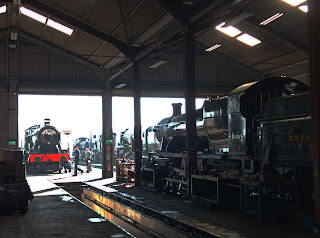 There was a real air of busyness about the railway, everybody was getting ready for the resumption of services. Time to get that cash flow moving again. There's been no money coming in since Santa flew back north.

Foremarke Hall was in steam and the whole loco shed was abuzz with people running about. Lots of locos to be seen too. 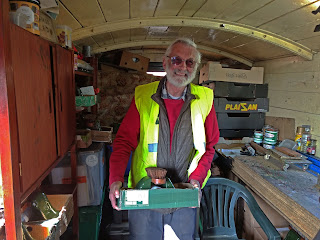 We spotted Roger, key boot scraper manufacturer for the 2807 gang, with a trolley load of recently cleaned GWR chairs. We seized the opportunity to introduce a new customer, so that was £40 quickly earned for 2807. 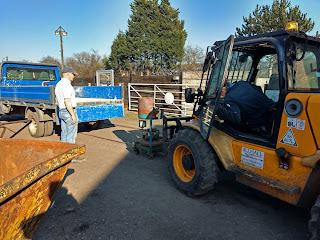 Outside the shed the canopy gang was loading the riveting equipment for Broadway. Yes, that riveting on the footsteps is really going to happen. We've got the compressor we need all lined up as well, on hire at a friendly rate.

To finish this balmy sunny day, what better place to drink a Cappucino than the terrace of the fruit farm above Hailes Abbey. Stretch your legs, listen to the birds and admire the new blossom.

As we were not able to bolt down the newel posts we decided to wrap the whole darn lot in a big lump of concrete. That'll hold them. 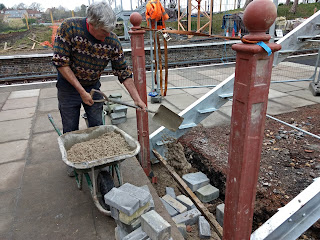 Today was the concrete day.

We had a dumpy bag of ballast, a few bags of cement, a mixer and three volunteers. 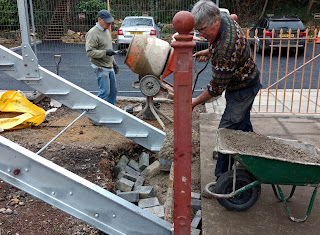 The mixer turned out to be 'Minnie the mixer' from Hayles, and she was still moody. A year in storage did not affect her propensity to die after a few minutes use.

Luckily we know your petulant ways, Minnie! A lump of wood under the legs made the engine more horizontal, and after that she purred away happily. 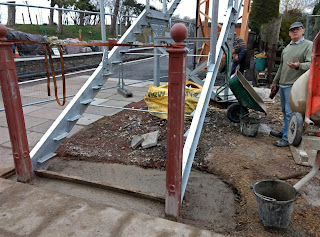 At the end of the day - OK, a short day - we had the concrete in and it is going off as we write. By Monday we should be able to remove the ratchet strap and the posts will be firmly vertical. We checked with a level...

We had a big gang today.

We filled this Landie with tools, the other with ballast, to take out another twist discovered in the RDA area at Cheltenham Race Course. 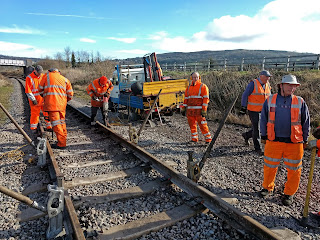 We car pooled as there isn't much car parking space down there. That, and with both Landies, gave us a respectable team of 15 on site.

Today we had the Kango hammers out. 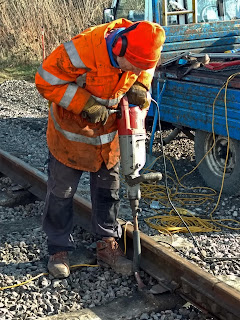 Where the ballast is already deep it would be a lot of work to half dig out every sleeper and pack by hand, so today we brought the generator and two Kangos, which punch through the ballast, as Steve here demonstrates.

It's a noisy job, hence the ear defenders. 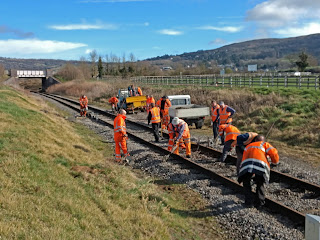 This is where we are, just south of Southam bridge. Last week we marked out a series of 21 sleepers at 4 sleeper intervals, and this is the stretch that is affected.

Even with the Kangos there is some digging required. 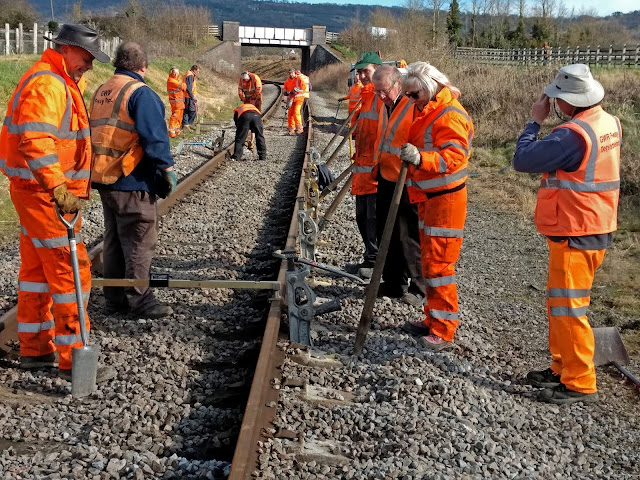 Basically the outer running rail had dropped a little here, so this row of 5 jacks reinstated the cant on the curve into CRC.

In the background the Kangos are being used to pack the 4 sleepers dug out last week. 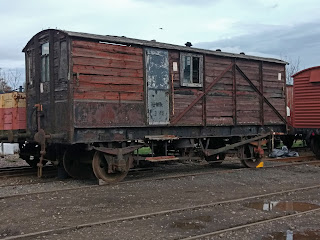 This job didn't take so long, and was completed in the morning. We then returned to the mess coach at Winchcombe and found that it had a visitor, recently parked on the same line.

Not sure why this wagon was singled out and parked here. We think it's a riding van, possibly converted from an old brake van? The shuttering at the nearest end and steel plate below look odd. 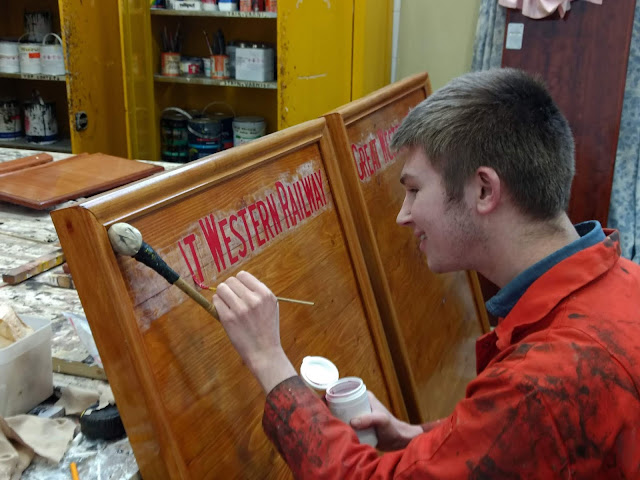 The return to Winchcombe also offered the opportunity to see how Alex was doing with lettering the replica GWR poster boards we made. The answer was: he's doing just great! You can see how much he enjoys doing this.There's some black shading to come too.

Does a LH person paint backwards, and a RH person forwards, we wonder....

The two boards with their specially manufactured replica moulding are of the 'indoor' type and are destined for the Broadway booking office. An original example already hangs on one of the walls there. We have a replica poster and GWR timetable promised for them, to achieve the period look.

Four 'outdoor' type poster boards are also in the course of manufacture. These will hang on the platform walls of the building, as per original 1904 photograph. They are of the same shape, but painted, with cast letters. 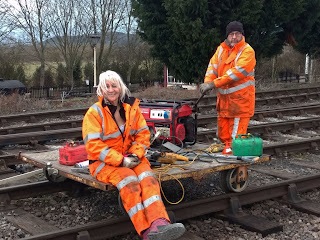 After lunch, a genny, tools and Diana were wheeled out to the Toddington relay site. 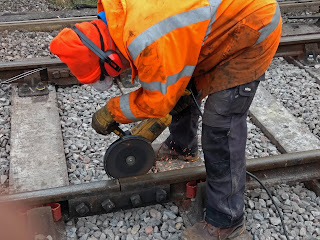 The genny powered a disk cutter, which Steve used here to grind down some edges on the joints, caused by the different wear patterns on the SH rails we have had to re-use here for cost reasons. 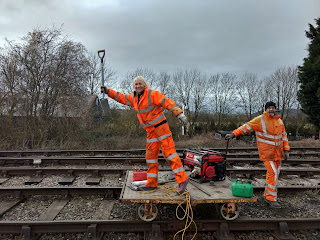 Diana also posed for the PWay gang's new motto : FORWARDS ! She'll need a certificate for that shovel though. 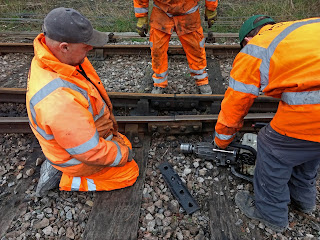 While walking to the relay site we noticed two cracked fishplates along the way. It never rains, but it pours. We tackled those as well. 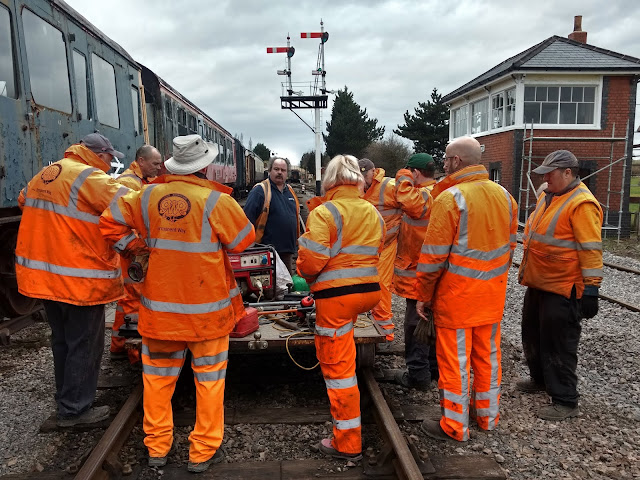 At the end of the day the group gathered round again - we fancied having a group photograph of ourselves.

Notice also the reinstated signal box windows on the right.

So, gather round people, let's have a group photograph: 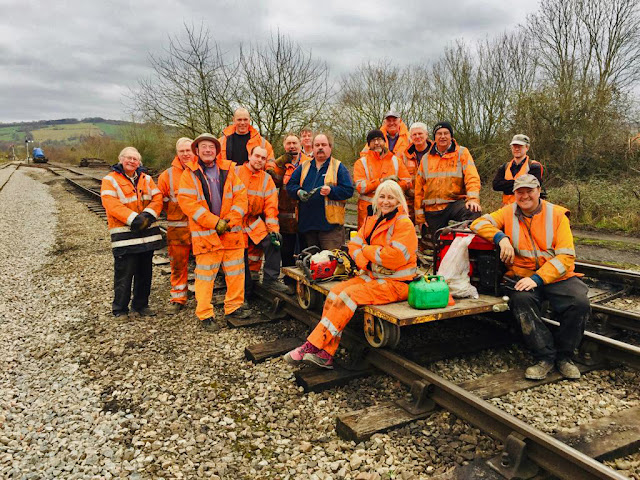 Afterwards, Nigel treated us all to a beer at the Pheasant too, what a special day it was.