Our highly motivated railway graffiti hit squad took a Landie down to Southam bridge today, to address the remaining graffiti not dealt with when we first did the Gretton area. 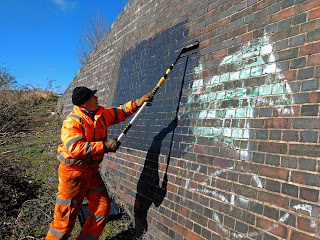 The stuff at Southam was so large that it was not practical to remove it, so as an alternative we covered it in a layer of black wall paint. 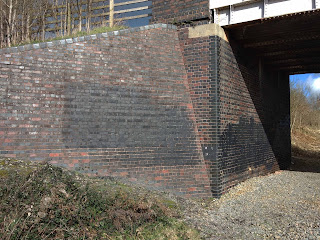 The paint was really quite effective, we almost had a colour match with the Brindle bricks. It went on in a very satisfying manner with the roller on a stick.


A second area that needed treatment was an underbridge next to the new housing estate north of Bishops Cleeve. 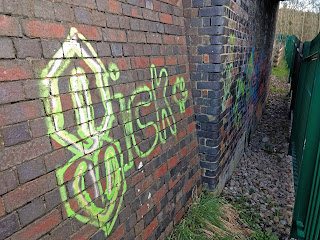 Previously we did the pilasters above, but the wing walls and abutments, albeit out of sight to the trains, were also heavily covered.

The drainage gang have already built an anti vandal fence inside the passageway, so all we had to do was to remove what there was, and there is a good chance it won't be put back again.

If so, we will just paint it out again, we have lots of paint and two rollers on a stick.


Aerosol paint is not cheap, about £12 a can, and we think we can keep this going longer than the individual who is doing this. 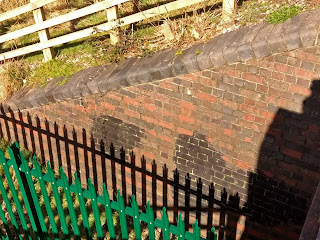 Here is the same wing wall after treatment. 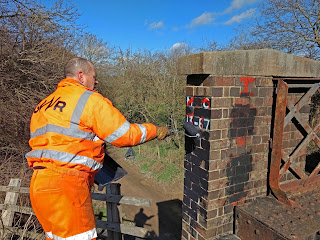 Just in case, we checked the rest of the area up to Gretton, and found one or two bits we missed the first time round, like this bridge identification marker.

We may have to re-visit after the school holidays, but this exercise really wasn't very onerous and we are happy to pounce again if required. If you see any more, let us know. 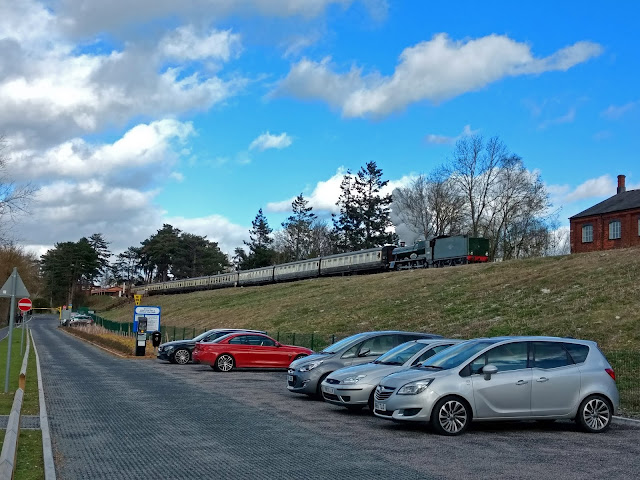 On the way home we had a look at the new car park, mid afternoon on its second day of operation. We're pleased to say it was indeed being used by passengers, with about 20 cars in evidence.

The embankment has recently been cleared again, so we can get a full view of the last Broadway departure for CRC being hauled out of the station by Foremarke Hall.

The car park has a one way system with its exit at the Childswickham end, where there is a one way trap in the ground to prevent cars entering. In the 10 minutes we were there two cars tried to drive the other way past the no entry sign in the picture. We'll have to see how this works on busy days.

The canopy gang is waiting for additional quotes for the scaffolding. These may take another week or two for scaffolding to actually arrive on site 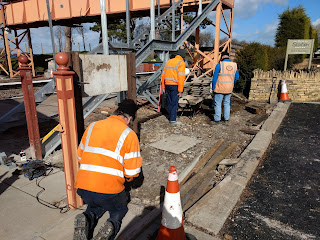 In the meantime we drilled the holes for the 'Passengers are requested to cross by the bridge' sign.

In the background the Broadway gang is preparing the area under the steps for slabbing. This really needs to be in place before the scaffolders come. 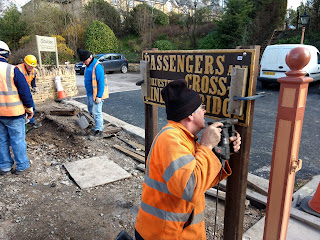 We've got the one cast iron sign we have out for a test fitting. We drilled the holes into the rails set last week, but decided not to finally bolt on the sign until it is needed.

We remain hopeful that a second sign, with the same text, will surface as a gift, or at an auction. That would be for P2. If you see one, let us know. 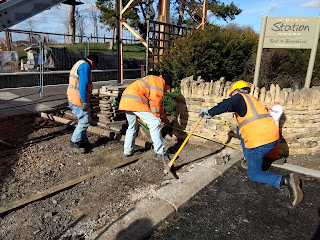 Once we had drilled the bolt holes, we started to dig the holes for the two cast iron gate posts that will effect a return to the spearhead fencing that will run along the kerb here. The others were levelling the area ready for slabs - just visible at the rear - and barrowing away quite a bit of excess spoil. 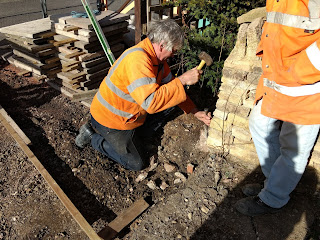 The first of the two cast iron gate posts, the last two of ten replicas we had cast a couple of years ago, will go on the end of the B&B wall here. Neal is squaring up the hole in this picture. 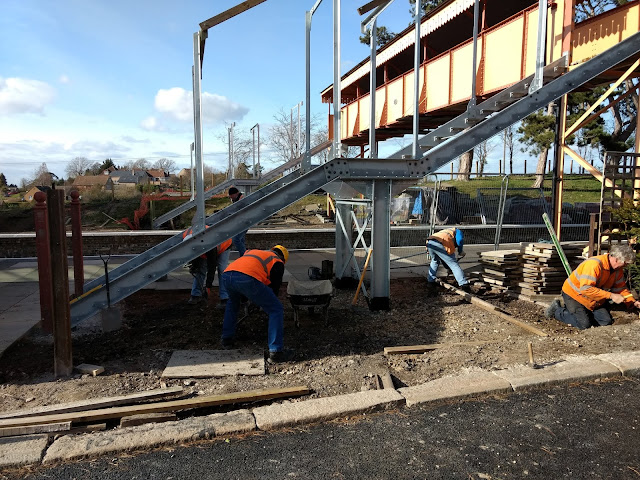 In this overview you can see the Broadway gang busy levelling the site under the steps, with a shaped board on the right which is pulled along to get the desired level for slabbing.

Neal is still hammering away on the right. 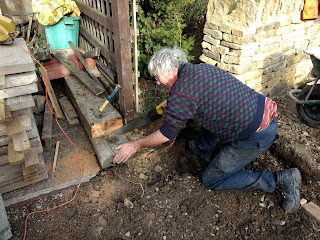 The sleepers were in the way, so Neal cut the ends off. It took quite a while, with that hand saw.

The three of us took it in turn to excavate the two holes, which we eventually realised were easier to excavate as one big one. It was a hell of a job, as we hit the slag stones originally placed by the GWR when the station was built. These blanket the original clay underneath, and are very hard to extract when jammed up together at the bottom of a narrow hole.

Next time we will put a concrete base in the two holes, then the posts themselves.

A smaller than usual gang today, as several of the regulars were helping with the race trains, being stewards in the train, rattling buckets, or even as a signalman for the three trains.

We kicked this rather windy day off with tea and some second hand magazines brought in. Eventually Dave rose and outlined the programme:

Two teams today, one to replace plain fishplates at Broadway with insulated ones (part of the signalling installation), the other team to work on the north carriage siding at Toddington. 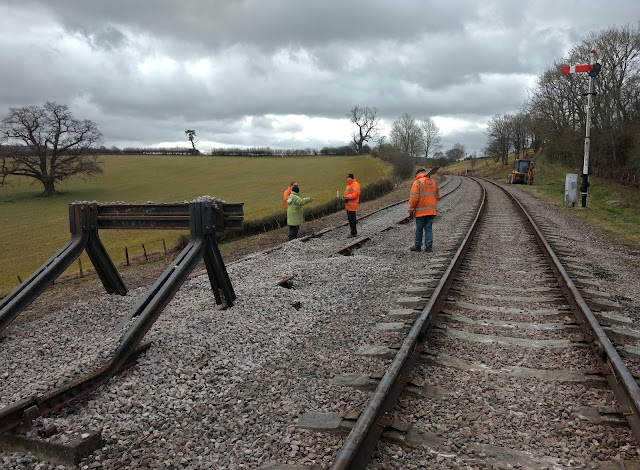 We have worked on this siding before, fettling it up for regular use with the stabling of two of our rakes of coaches here.

A ballast drop and a run by the tamper have got us this far. The tamper was unable to do the last 20 yards, and some of the lifts required were so high that one pass by the tamper was visibly inadequate to get the siding anywhere near level at the end.

Our job today was to jack and pack the last 100 yards of the siding.

Quite considerable lifts were required, some lifting the sleepers well clear of the ballast. 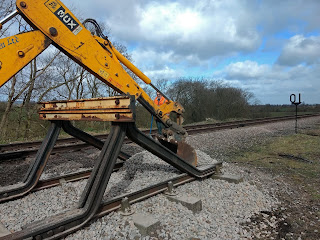 Extra ballast was retrieved by Stevie from the stop block area, a tricky bite for the back hoe. 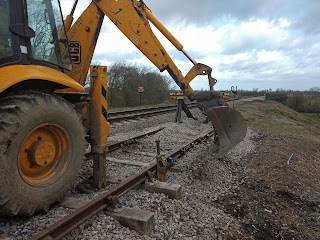 Stevie in the JCB rolled forward a few yards and dropped what he had managed to retrieve on the shoulders here.

It's hardly a main line, but we like to do a good job. 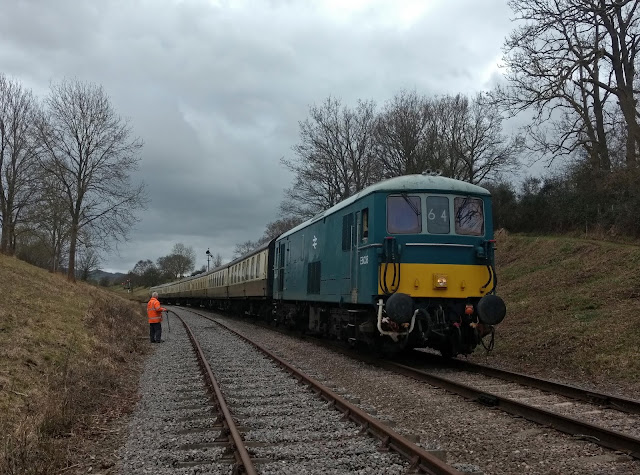 Further towards Toddington the tamper had worked well, but some ballast was covering sleepers, which Robert was clearing in a one man effort as the class 73 came by with an ECS working for Broadway.

This is a positioning move for a race train tomorrow. 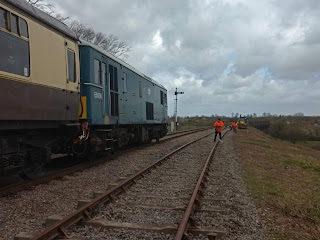 The ECS train trundled slowly by, as still in the 10mph station limits area. 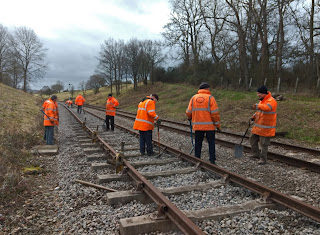 We then moved our trip jacks to a second low area, where again quite a lift was achieved, and you can see the sleepers rising out of the ballast. 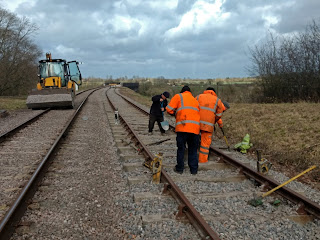 This was the low bit that had been tamped, but the modest lift wasn't high enough the first time round.

Stevie also brought a front bucket full of fresh ballast, fetched up from Stanton a mile away. 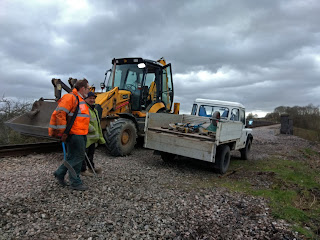 At the end of the day we achieved what we set out to do - spread the lumps of ballast at the end, and lift and pack the final 100 yds of the siding so that it is now level.

Job done. Now to put all the heavy tools back in the white Landie, and reverse it back up the line to the nearest foot crossing. No chance of a three point turn here, it's very tight and a long way down.