As the temperature rises, the number of volunteers falls. There must be a correlation in there, as it was 28 degrees today and after counting all the heads in the mess coach first thing, and waiting for ages in case someone else turned up, there were just 5 of us. And that on a Saturday too.


But that was enough to do the job in hand, to wit, repair a twist at Didbrook.

This was not on a track walker's report, but was reported by the loco crews so was a bit more urgent.

A twist is when alternating sides of track show a dip, resulting in a rocking motion on the train.

We already had a look last Saturday, so knew the lie of the land there. In fact it has had track unevenness before, thought to be caused by a boggy piece of ground at the foot of the embankment drying out in the heat we are currently experiencing.

To locate and identify the problem and its size we packed the Landie with its tools and drove out along the trackside.

We are here between the two Didbrook bridges, not unreasonably referred to as Didbrook 1 and Didbrook 2. Didbrook two was replaced with a concrete deck in the last days of BR ownership and is in the distance by the trees here. 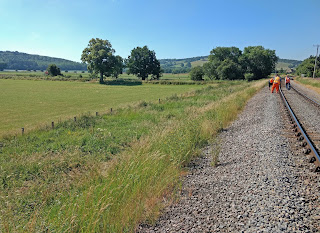 Suspect No.1 for these twists is this boggy piece of ground below, on the Cotswolds side. As our line acts like a dam for all water coming off the Cotswolds edge (on the left here) it needs good drainage at the foot of any embankment. The wealth of fresh looking vegetation in the strip of land below suggests that it is wet down there, and that it could do with an additional drainage ditch. Indeed the next strip of land (beyond the trees in the background, by Didbrook 2 bridge) has a drain emerging on the road which was running even with the heat we have had over several days now. 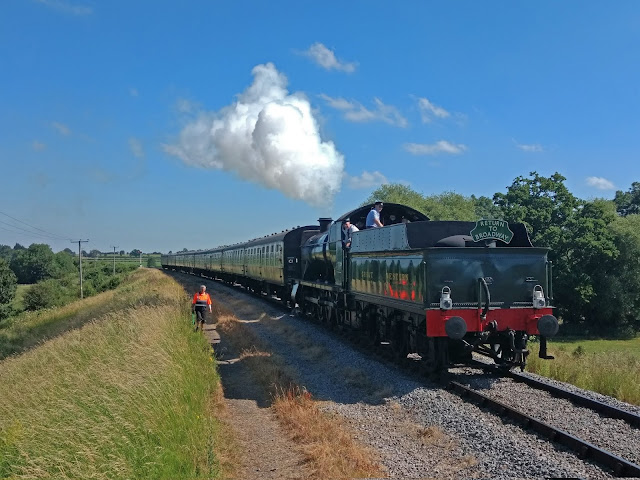 Before starting work we let the first train of the day go past, the 10.00 off Toddington, on its way to fetch a large crowd of waiting passengers at CRC. Here you can see a section of track jacked up, and a resulting void under the sleeper in the centre.

You have to shovel that sleeper free first, before packing it with stone underneath. 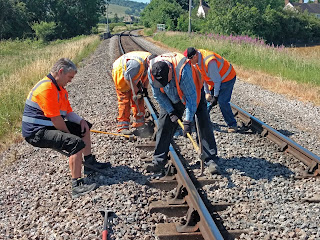 Not all of the sleepers want to play ball. This is some of the earliest track laid in 1983, and some of the chairs have play in them meaning that you have to bar them up from underneath.

Paul is using his body weight here (some say he is resting, but no, he is hard at work) to force the bar down and the sleeper up into the chair. The void under the sleepers is then packed, here by Neil and Bert, further back. 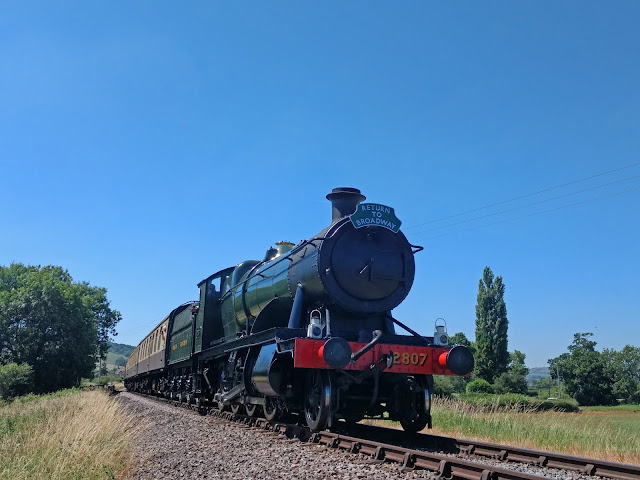 After an hour the CRC train came back, now fully loaded with passengers intent on a day in the village of Broadway. 2807 has just stopped at Hayles Abbey halt round the bend, as has restarted for the last mile into Toddington. 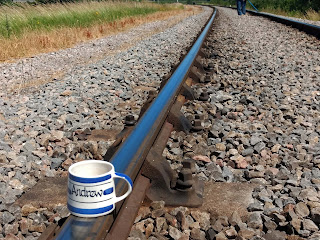 The heat had one benefit, other than the impressive tans we are all getting. As well as getting a leathery skin, you can put your mug of coffee on the rails and it will warm up again. Handy ! Mustn't forget to take it off again before the next train comes.

And it wasn't long either. 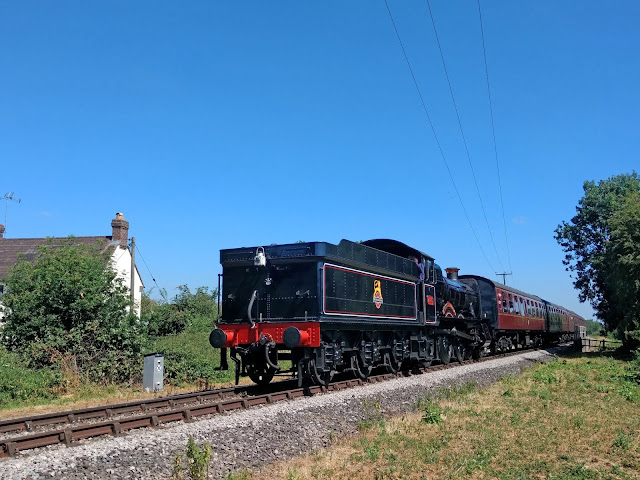 It was Dinmore Manor off Toddington, but we had already almost finished. We did the twist, and a number of fishplate dips in the next two lengths, just for good measure.

Then it was back to Winchcombe for a picnic lunch. Alas, no cake today, as Mr & Mrs B were off on holiday to the Cake district (Ed: pse check spelling) 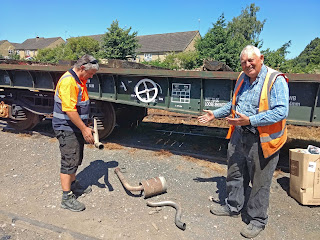 Back at the farm, Paul showed us the special Landie exhaust as was, with a new one fabricated now under it.

Our Landie is a bit of a one-off, as it has rail wheels and a crane. It's the crane that causes trouble for the exhaust system, as it has to climb over the bottom of it, resulting in a complicated arrangement of bends and resulting welding work. But we are now roadworthy again, thanks to Paul. Neil can't believe it.


A promise of rock cakes from Bert Ferrule, acting HOD today, turned out to be a wind-up so we had to resort to a packet of double chocolate digestives. These had spent hot day in the back of your blogger's car and had to be prised apart with a knife, but they were still biscuits, so counted.

A heated (in more than one way) debate followed in the mess coach about various topics raised in Thursday's Plc AGM. This was a much cooler affair, as it was held in a room under one of the stands at the race course at Cheltenham. 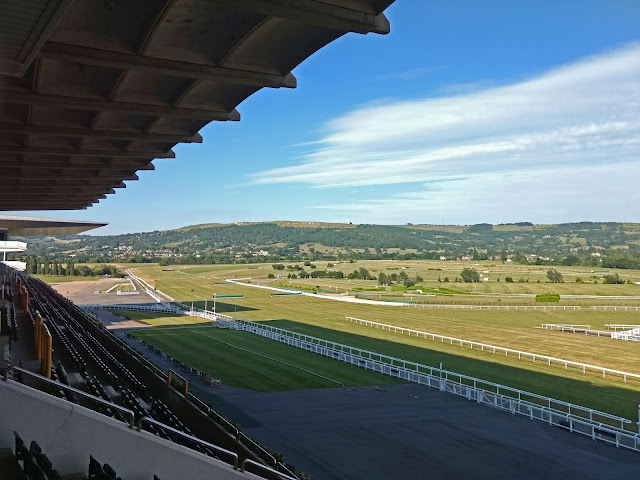 What a fabulous view ! We are looking at Cleeve Hill here, which has Winchcombe behind it. Our CRC station is off the picture to the left, and the line makes a big loop round this hill. When our line was built a straight line option would have been to tunnel right under Cleeve Hill, but the expense persuaded the GWR to dodge round to the west of it, resorting to a much shorter (693yds) and cheaper tunnel at Greet. 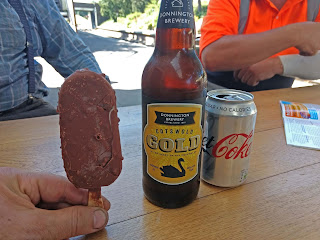 This was our reward at the end of a very hot day - a Peppermint magnum, bottle of Donnington's and a diet Coke, each to his own.

Just a snippet from Broadway today, but on Friday Neil in the S&T Baguley-Drewry inspection car visited the station to take away two of the 40 or so stacks of concrete troughing stored on platform 2. The troughing is needed at Winchcombe, but it is the intention to load the remainder of the troughing on to two bogie flats and then store them up the headshunt until they are used in the stretch of track by the goods shed. Removal of the troughing will boost the appearance of the signal box area enormously.

We took a little film of the Baguley-Drewry inspection car, in case you haven't seen it in action.

More fishplate greasing on Monday, do come and help us if you can.