Just 11 of us today, but we finished off the spot resleepering of the C&W back siding. 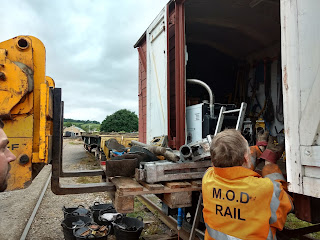 Nigel offered a palette up to the tool van, and we loaded it full of the heavy stuff needed for changing sleepers, or harder still, changing point timbers. 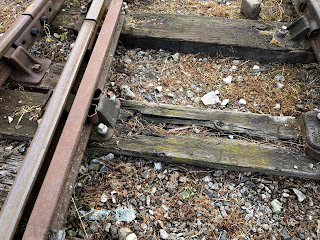 The pallet was dropped near where we were working, followed by two long second hand timbers and three plain second hand sleepers.

This is the sort of thing they were due to replace. A point timber with a hole in the middle, soft enough to stick a spade right into it. 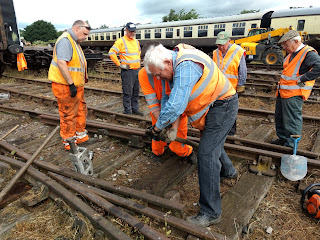 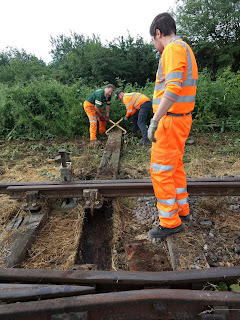 Eventually the rails were high enough to extract the recalcitrant timber, but not without considerable prodding with bars from the near end. As the people on nips pulled, the near end reared up and jammed itself under the chair. More heaving on the jack handle eventually sorted that out. Note the remaining bed of perfectly formed humus and garden soil. There was no ballast when this was laid in 1989. 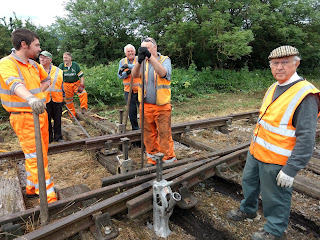 Work paused to watch the first train of the day drift in. 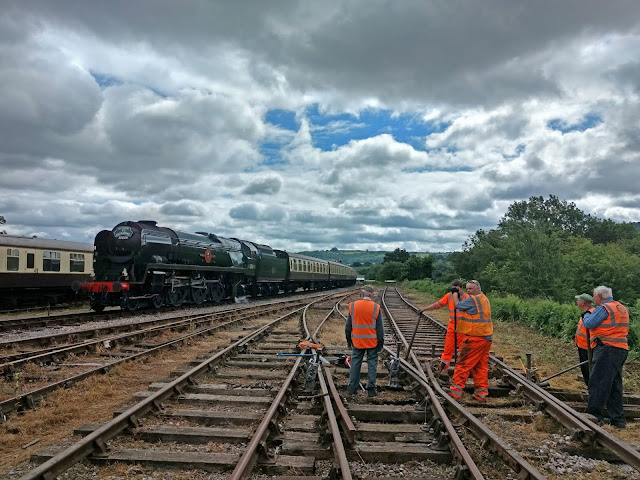 This was 35006 with a partly filled train. It got busier as the day progressed though, there were faces at most windows staring at us. 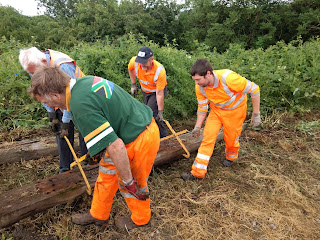 The rotten timbers were not so heavy, so four of us were able to drag them away without too much trouble. 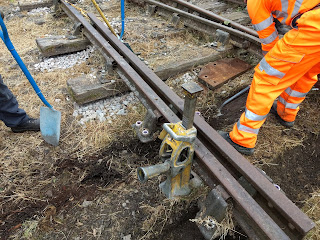 To make room for the replacement timber the crib had to be dug out. This wasn't too hard in principle, as humus and garden soil are light, but every now and then we would meet a rock or a brick embedded in the bottom, which, according to Pete who had actually helped lay all this in 1989, is how they packed things in those days to get the levels right. Needs must, but those were grim days. 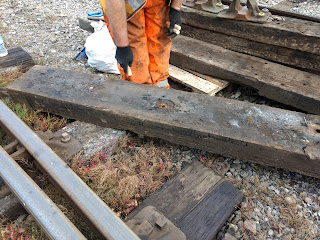 The replacement timbers were turned over and the holes from the previous chair screws were sealed with lengths of broomstick of similar size. 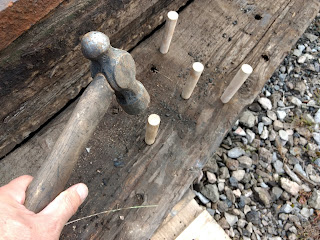 These were hammered in as far as possible, then sawn off to give the chair in its future position a level surface to sit on. 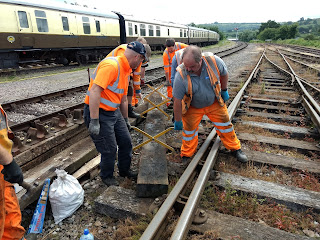 As the replacement timbers were considerably heavier than the rotten ones it took six of us on nips to carry them over to where we were working. 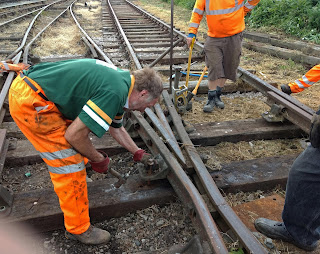 With the old bed dug out the timber was dragged in successfully and marked from above to designate the positions of the new holes for the chair screws. 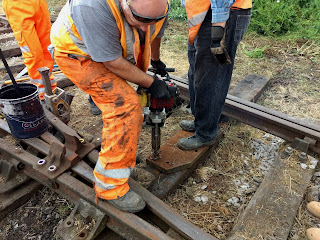 The timber was then pulled out again a few inches to reveal the marks for the new holes, and drilled accordingly.

After lunch we were treated to a very tasty sponge cake with home made jam filling. A tour de force from Mrs. B. It is the custom to put 50p on the table in exchange for a slice of sponge cake (or perhaps several, if you are cheeky enough) and today was the day that arrives every once in a while when everyone had to scratch around at home to find his 50p, and instead ended up with a pile of small change rather than the desired angular coin.
Came cake eating time and a fulminating Nigel found himself with a vast pile of small coins to take home. Until.... Steve, last to pay, proffered a £10 note. Bingo ! Steve got the pile of small change, and Nigel the £10 note, everyone happy. Well, except Steve.... 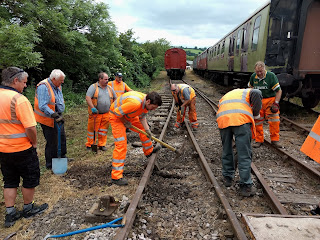 After lunch we moved on to replace three more sleepers. As punishment for bringing a £10 note for a 50p transaction Steve had to dig out the next crib while we all stood and watched. 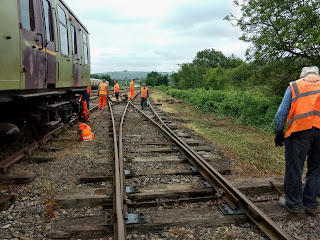 The three sleepers didn't take so long and we soon made a start on putting away the tools. Steve L and Neil took a closer look at the point lever here, after finding it reluctant to lock. 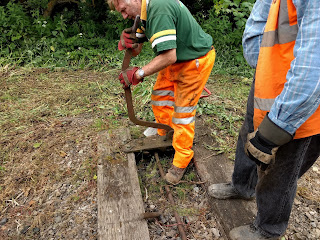 The point levers have an interesting mechanism which switches the blades alternatively to the right or the left, always with the same pull backwards. 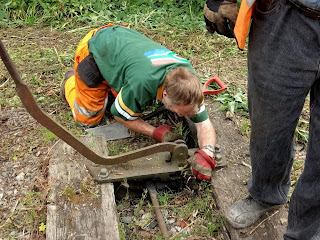 Except that today it wouldn't lock.
Steve got down on his hands and knees to investigate.
His diagnosis was: old age, leading to loose joints. How fitting for this gang! 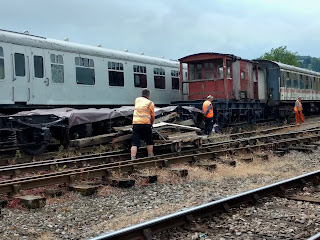 This should be the conclusion of our little excursion into the C&W back siding, and next week we'll be doing something else. Here's Paul wheeling the trolley back to base, filled with leftovers. At least we get to add to our scrap pile, as we exchange GWR throughbolters for S1 chairs with regular chair screws. Today the oldest chair spotted was a GWR one dated 1892. They all go to the 2807 group, unless broken, when we can sell then remains for scrap. 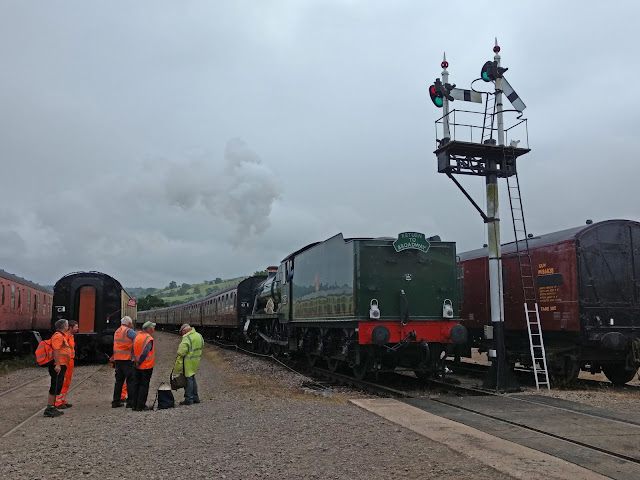 As we tidied up, ready for a final fling at the Coffeepot, we watched Foremarke Hall steam past.

Behind us there was a deep droning noise in the sky, what the....? 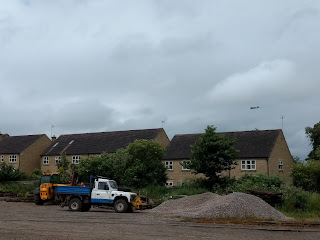 A WWII aircraft flew across the housing estate behind the yard. If we zoom in, we can see what it was: 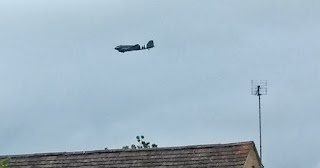 A Douglas C47, Aka the Dakota.

If you want to hear what we did, check out this video:
https://youtu.be/h4XzzKbFH6U 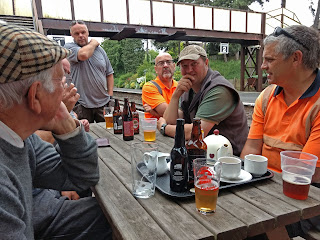 Then it was all hands to the Coffeepot for a social drink:


An report on the excursion to the NYMR will be posted tomorrow.
Posted by Jo at 18:17