Only 8 people volunteered today, perhaps as a result of the Thomas magnet? Our first thought was to do stone blowing at Manor Lane, but that needs more people than 8. 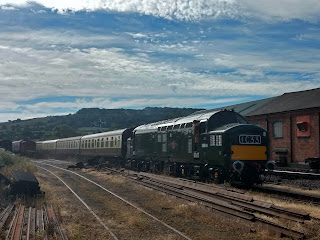 Plan B was to change 2 rotten sleepers, right by the mess coach. Not too far from refreshments during a hot day.

Today was unusual, because it was Thomas weekend. There were two class 37s out, Foremarke Hall and of course the little blue engine.

Here is the Green Goddess extracting one of the rakes from the sidings at Winchcombe. 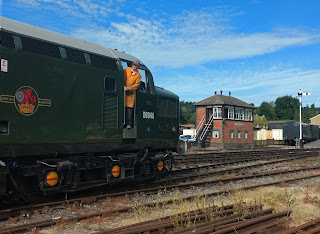 The second man on D6948 looks back to make sure that the rake is coming out cleanly.

That face looks familiar... hey, it's Dave F, one of ours! No wonder we are down on numbers today. No doubt we will see him when there is cake around at lunch time. 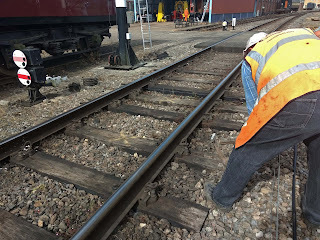 With the loco vacating that bit of the yard in front of us, we were finally able to get going with the job. These sleepers, marked with an 'X', don't look too bad, but we watched them pump up and down when a train ran over them, so they are indeed coming out. Neal makes a start with digging away the ballast. 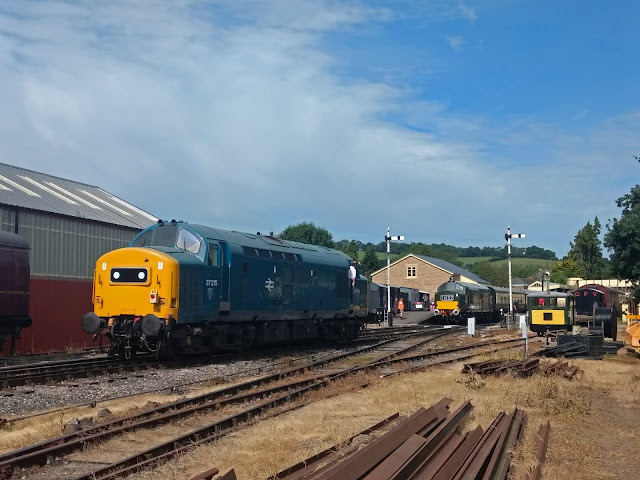 Then another class 37 arrives (37 215), it ran right over our work area so we had to stand aside. Now you can see two of these beasties in the same picture. We all agreed we like the sound of their 12 cylinder 'Vee' type engines, also known as 'tractors' in view of the agricultural roar they sometimes produce when accelerating. 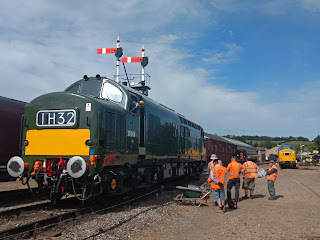 So that was a blue one going over our work site, now this is a green one a few minutes later. Each time we downed tools and stood to one side. Not much progress here then. 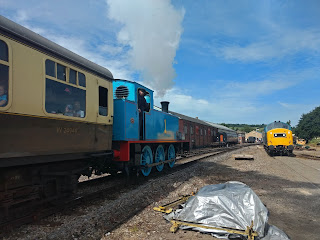 With the green one gone again, the road was free for the next interruption - that cheeky little blue engine. We stood to one side again. 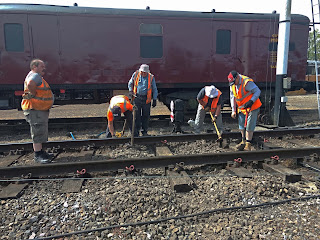 As soon as Thomas's train had passed we jumped back into the four foot, and not liking the look of another sleeper a few yards away, we decided to yank that one out too while we were at it. Here is the gang working on both at once. 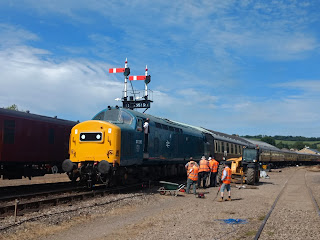 Then, out came the next train heading back north again. Heck! Can you see a bit of a theme developing here? 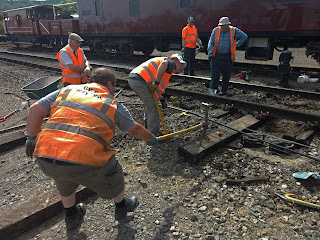 Once this train too was clear, we managed to pull out the two rotten sleepers. While some look OK from above, they have been marked as life expired by the track walker and it is therefore somewhat gratifying the see them fall to pieces when you do finally pull them out. We weren't wasting our time then. 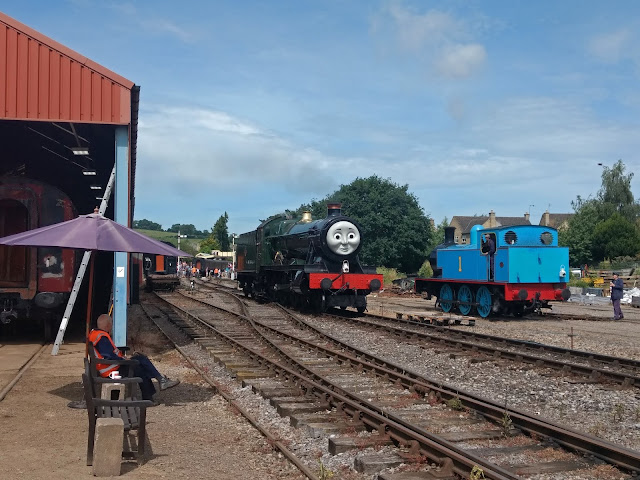 Mid morning the first Cheltenham train arrived, headed by Foremarke Hall with its Thomas type face on. Maybe 'George the GWR engine'? The actual Thomas had retreated to the siding in the PWay yard for a short time, until it was his turn to star in the show that was organised between service trains. 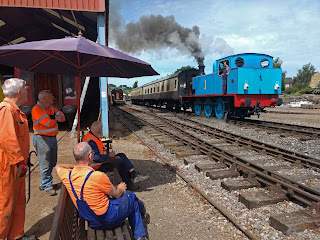 The best view of proceedings was from C&W's little sitooterie*, from which trains could be observed at leisure while sipping tea from under a parasol. Yes, a C&W parasol. It was brought out first thing in the morning.

These people know how to look after themselves... 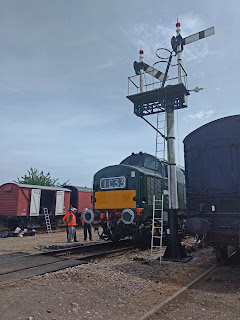 As soon as the Thomas train had passed the work site, it was the turn of the class 37 to shunt out to just beyond the bracket signal  - precisely the spot where we were working.

After changing ends, the crew took it back into the station, so vacating our area again. 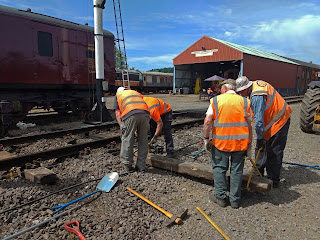 Quick! Get that replacement sleeper in. We found two innocuous looking second hand sleepers, pegged their old holes and shoved them in under the track. 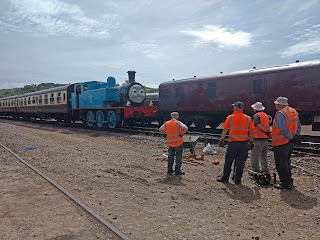 Back came Thomas, we stopped again. Thomas was shuttling up and down between Winchcombe and Toddington, performing at each station before moving on to the next. 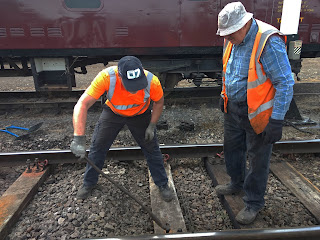 Having dragged the two sleepers in and redrilled them, we hit a snag. The bolts would not go in. The 'animal' got so far, gave up, and then was unable to get them out again. We had to resort to the old fashioned 'hand spanner' to undo them and scratch our heads over the reason for the non compliance.


Eventually it emerged that the replacement sleepers were hardwood ones, and this required a larger section drill. The holes were drilled again. The bolts would still not go down. This was a mystery to us, and it was not resolved. What we did do however was search the yard for more worn bolts, and these did eventually go right down, with a lot of insistence from Bert on the 'animal'. After a spot of packing the ballast, it was job done. 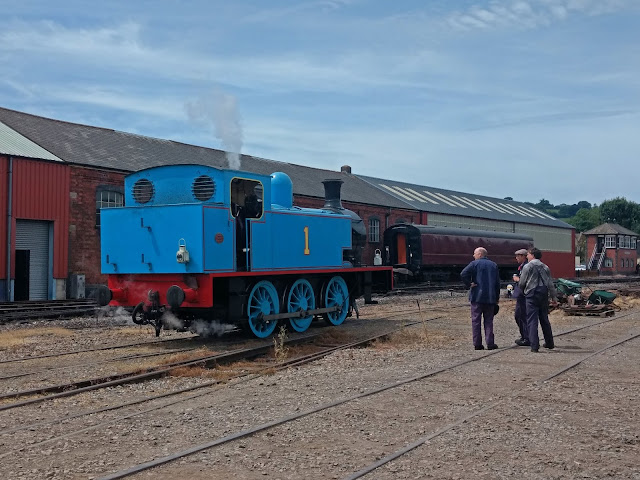 Thomas meantime was having a well deserved rest in the yard, with his crew looking on as the safety valve began to blow. 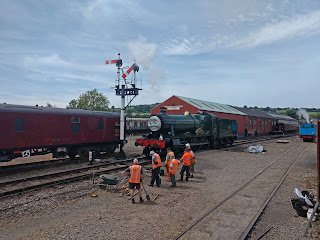 Thomas seemed to be waiting for Foremarke Hall, another visitor to our work area for a few moments at a time. 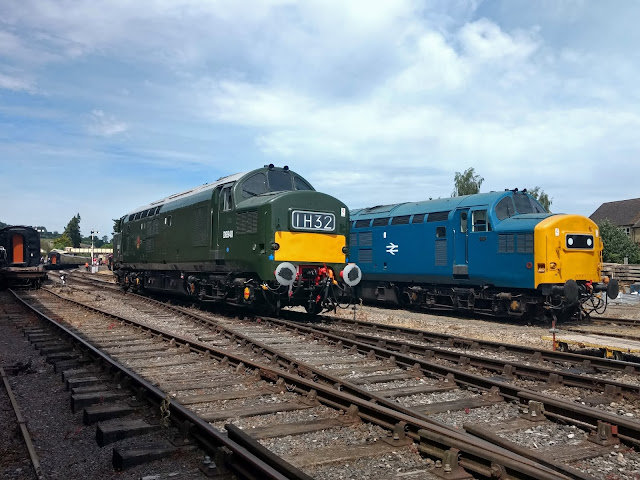 During some idle hours for the two Growlers we managed to photograph them next to each other. Two generations here, with different colour schemes. 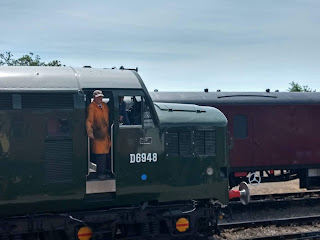 After our lunch we had several slices of Mrs. B's excellent sponge cake left. Such left overs are usually hoovered up by Dave F here. By waving the remnants of the cake out of the mess coach window, we hoped to tempt him back into our fold, but the diesel draw was too strong.

You can see that Dave was tempted though. Nearly. Nearly !

At Broadway on Friday two of us had a relaxing time attending to outstanding jobs on the station. 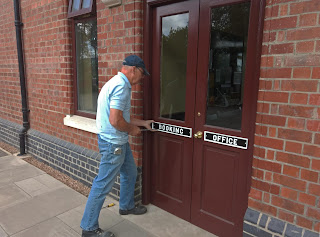 Number one, pending for a long time while we got the length of the door plates right, was the 'BOOKING OFFICE' on the outside of the front doors.

As these are exterior plates, we have used 'clutch' type screws to prevent unkind visitors removing them, even though they are replicas. 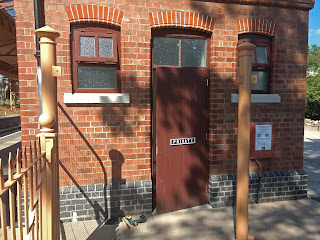 This was once the entrance to the Gents in the original station, hidden by the modesty screen being built here. Today it is the kitchen door, so we have equipped it with a 'PRIVATE' plate, also a replica of a pre grouping original. The woodwork for the modesty screen is in the course of manufacture; it's half way done but Neal has a lot on his plate at the moment (not cake, we hasten to add).

More fishplate greasing is pencilled in for Monday, if we can get 4, or better still, 5 volunteers. Please try to help.