The King is dead, long live - the rail motor?

The King left today, now it's definite. It's gone. We would find out more at the end of the day.

But first - we met at Winchcombe first thing, to split into two gangs. Both on the same job: track defects repair. Dave took a gang south to Gotherington, while a second gang took the Landie north to continue along the Defford straight between Chicken Curve and Didbrook bridges. It's a routine job, but you're helping the railway and the company is excellent. 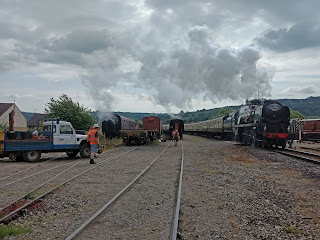 While loading up the Landie P&O steamed into Winchcombe station, loaded with happy punters. 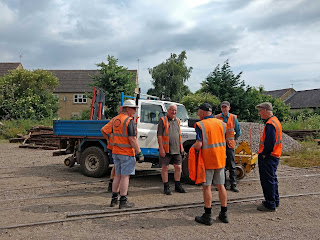 As you may have read, 12 of us are off tomorrow on a jolly over 2 days to the NYMR, all by public transport (for the challenge). Tour leader Robert here is giving a last minute briefing, what alternatives exist if you miss your train, where we are staying, and don't forget to tip the tour guide (ahem). 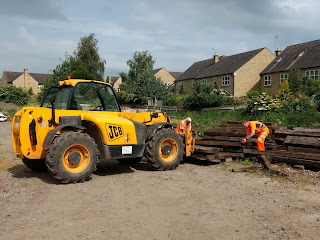 Peter and Jonathan loaded a handful of second hand sleepers for use by the Friends of Winchcombe station. 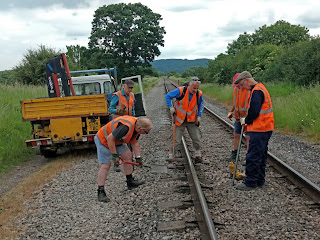 Then we were off, armed with a list of defects. We decided to concentrate on the missing clips (as last week) as the initially planned replacement of a cracked fishplate was deemed a bit risky in this hot weather. 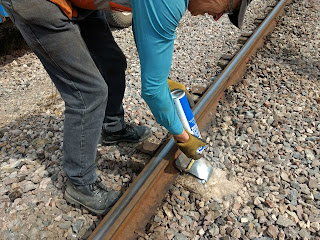 A clip that was replaced by a newer, stronger one was painted white, so that it could be identified if it should come out a second time. Others were replaced with additional pads underneath. 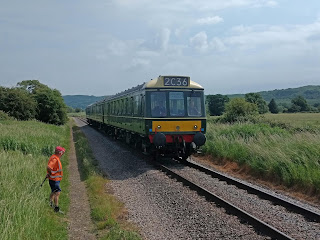 John worked on ahead and made additional checks by tapping each clip with a hammer. Prevention is better than a cure.

We stepped aside to let the DMU trundle through, here at the start of the Defford straight.

We slowly worked our way up the line, ticking the items off as we went along. 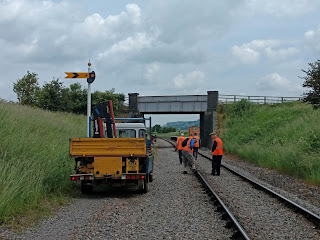 Here we are at the fixed distant for Toddington, with Hayles Abbey Halt just beyond under the bridge. 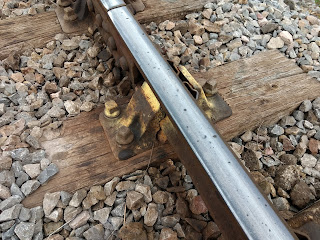 Approaching Toddington, near the Didbrook bridges, the track walker had identified this broken S2 chair. We needed some extra kit for this (eg a new chair) so decided to do that one after lunch, armed with additional tools. There's always one that you want, but didn't pack. 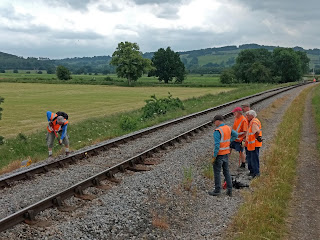 Rob was keen do dig the holes for the pan jacks - very keen.

A technical supervision committee was formed to oversee this.

In the background is the valley in which the mighty Hailes Abbey once stood, until demolished under the instructions of Henry VIII. 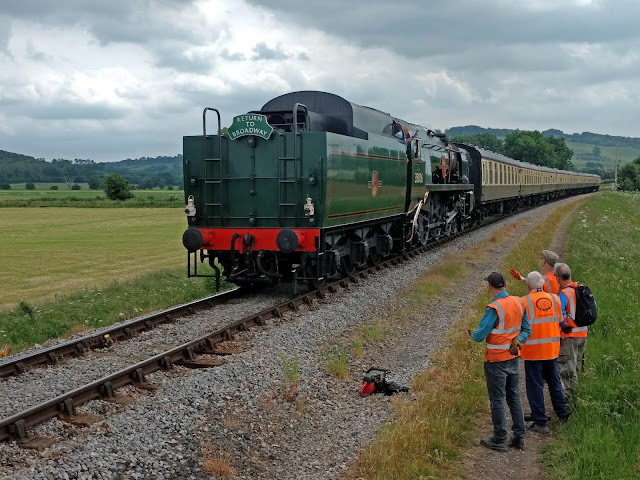 Hole dug, Rob stood aside to let P&O glide past and into its home base of Toddington. The errant chair is marked in yellow on the left. 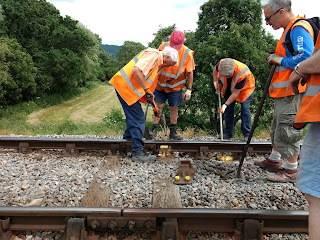 With the train gone, we had an hour to work in peace.

Here the pan jack is being inserted under the rail (it can stay in place even with trains passing) while the others remove the broken chair, or the bits of it. 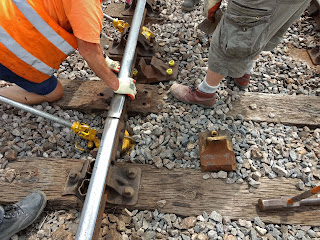 With the broken chair in the foreground, the replacement one is slid under at the back.

These chairs come in three sizes, so you need to rummage through the pile at Winchcombe to retrieve the right one. Get the wrong type, and the bolts won't go in the holes in the sleeper. 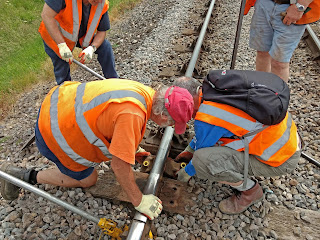 Here the new chair is coaxed in under the rail with fingertips, and, if the pan jacks have been pumped high enough, it can be slid into place under the rail. 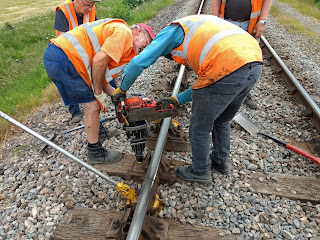 The bolts fit - Yesss - are hammered down and then screwed down tight with the 'animal'.

Pull out the pan jacks, dump on the Landrover, and head for the Coffeepot. Our little treat at the end of the day. 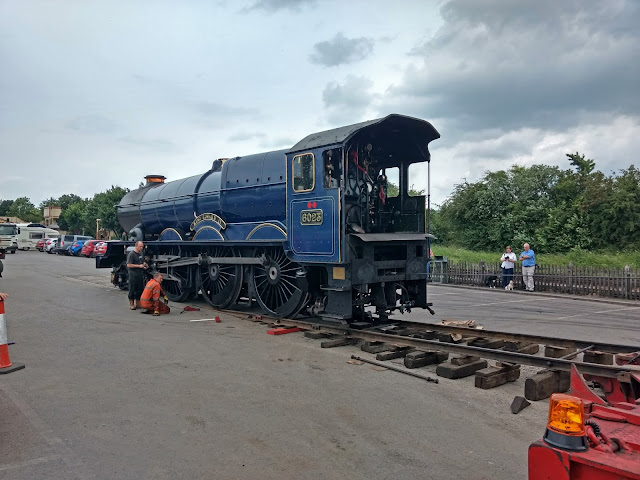 But first we have to turn the Landie round at Toddington. The car park is rammed, as often now, and in the middle are two Allelys low loaders, one for His Majesty, and the other for the tender. 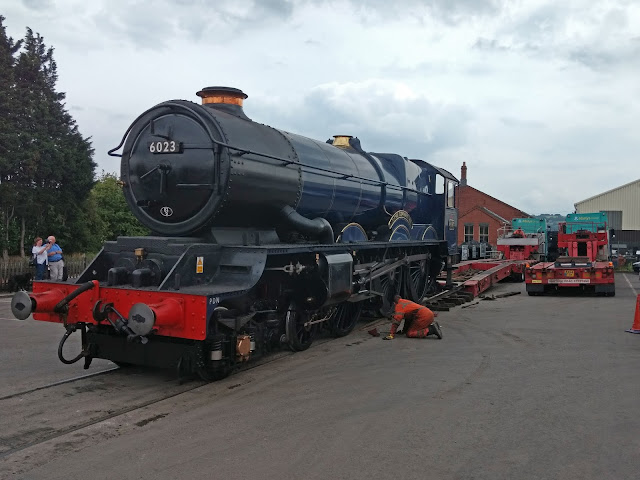 The huge machine is slowly winched on board, with men on both sides on hands and knees, making sure it doesn't disgrace itself by coming off the rails. But all went fine, and we say goodbye to this magnificent visitor.

Next, a Castle? Or: The Rail Motor. Did you know it was photographed at every one of our stations in 1905, except at Broadway. Surely we have to put this right!

Back in the mess coach, Jim and Dave are pouring over paperwork. 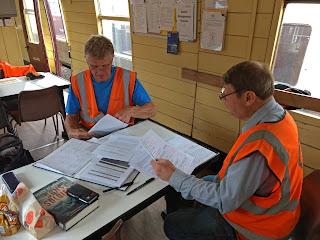 We've finally got a new Heritage project in the starting gates. It has taken a long time to get this far, but we are not quite there yet, so there will be more news as soon as we are ready to get up a working party.
In the meantime, it's forms to fill in, pencils - and: a bag of doughnuts. Well, you need fuel to feed the fires. And we are in expert hands here.

Before we go today, an interesting statistic from Blogger. They have been having trouble with message notifications recently, as well as with the page counter. It's not working. Relief is promised on their help forum, but no sign of repairs so far. The administrator can go into the setup page and retrieve the page views manually, and this gives the following statistics for the lifetime views of this group of blogs:

Over one million views.... who would have imagined that in 2014?

Thank you all for your interest. You might have noticed that the blogs are free of ads, despite Google's prompts to monetise the pages with annoying advertisements. As a quid pro quo, do consider making the occasional donation to our trust, a charity which supports the railway.
https://www.gwrt.org.uk/Make_a_Donation.html
Many hands make light work.

See you on Saturday, with news of the trip-by-public-transport to the NYMR. Will we get there with Northern Rail?