Eighteen joints remained to be welded on the Broadway extension, all on the fish plated section by the goods shed. Here we are welding one joint in two, to save on wear and tear but still have the flexibilty of fishplates, albeit with 120ft lengths. 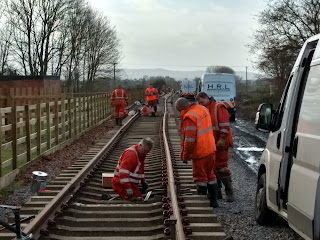 A fleet of vans from Haigh Rail descended upon us, intermingling with the people from the contractor repairing the damage from a bridge strike. It's all go here. Thank heavens we had a good commercial year in 2017, with just over 100.000 visits, 500 up on 2016. It doesn't make us rich, but it means we can afford some work on infrastructure.
In the picture above the vans are strung out along the length of track where the welds were due to go. 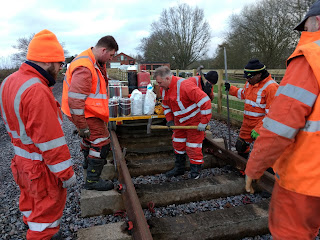 A problem issue was the fact that the rails had crept along since we laid them, only a few weeks earlier. We were most careful to apply the correct spacing between the rails laid, but it wasn't there any more today, despite all the Pandrols that we put in. Those temperature changes are very powerful.

The first job then was to move the rails along a bit using wedges. 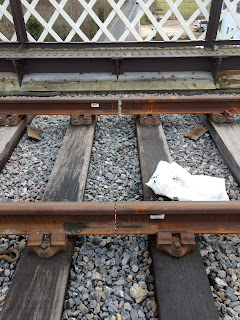 On the bridge over the Childswickham Road you can see an example of the incorrect spacing.

It's closed right up in the foreground. The one in the background is +/- OK.


This one in fact is going to be a weld as it's right on top of the bridge. We don't want too much hammer blow up here.

Pandrols have been removed on several stretches like here to facilitate the rearrangement, but now they all have to be put back again. That is a lot slower, we noticed, sadly. 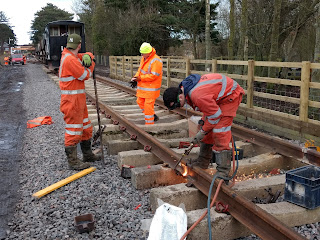 The welding process demands its own spacings (much wider) so they always cut a slice off to get a space big enough to receive the flow of metal from above.

We admired the neatness with which these experienced people cut off that slice, using a torch with little wheels on. 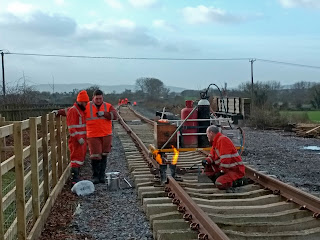 Once the space between the rails is the right size the moulds go on, and are made 'water tight' (or should that be metal tight?) with special clay patted round the cracks. They then heat the space with torches which give that lovely 'Vee' effect as the flames blast out. The pot with the mixture is ready by the side of the track. 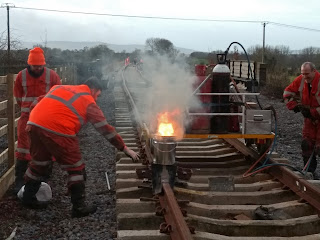 The welding now seems to be done with single use crucibles, and it suffices to pop one on and start the intense chemical reaction inside with a taper from above.

Best stand a bit further back then..... 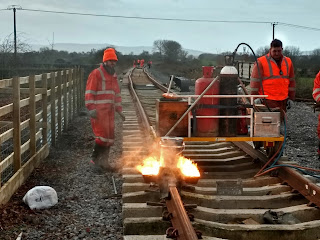 The reaction quickly zooms up to 3000 degrees Centigrade and the metal runs down into the gap, spilling over into two cups left and right. That's what's burning fiercely here. 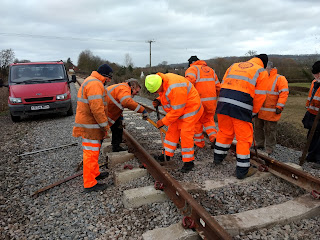 Out beyond the bridge the GWSR gang, not idle either, set about clipping up the initial basic railway up to the bridge, and, once the welders had gone, also alongside the goods shed. This took most of the day, and there is still a bit left to do (remember all those Pandrol clips hammered out first thing to allow the rail to be repositioned?). In places this was very slow, as the rail that was moved along a bit took quite a few of the rubber pads with it, which stuck to the underside worse than limpets. It took ages to get the pads unstuck each time, and juggled back into position on each sleeper. And you don't want to stick your fingers under the rail either, however tempting it may seem to juggle the pad that way. 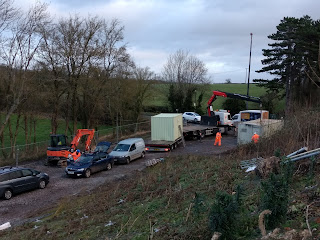 During all this time the contractors to repair the bridge strike were setting up camp in the 'car park' below. A couple of containers arrived and were put on the ground, just as the GWSR track gang and Haigh Rail arrived to drive right through the middle. Oh well, we are still good friends. 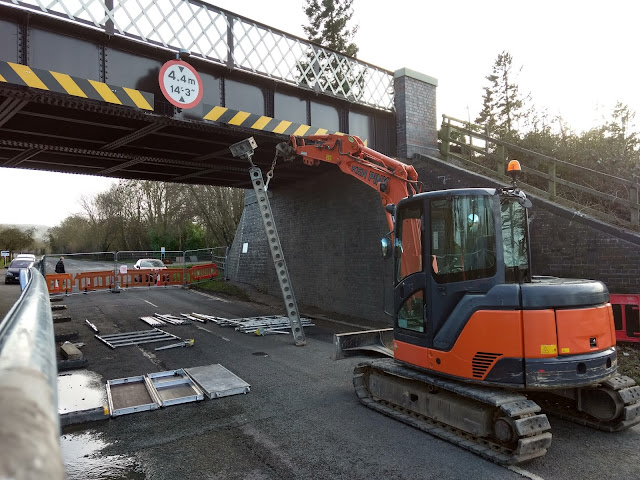 Today was the first day for the bridge strike repair. The strike was caused some weeks back now by someone carrying a 360 on a trailer, without ascertaining what the height of the load was. According to industry research (reported in the December issue of a leading railway magazine) an appalling 43% of lorry drivers admit to not knowing the height of their vehicle, while 52% do not take low bridges into account when planning their journeys. The circular sign giving the height as 14'3'' is not a mere warning notice, it is actually a prohibition. To no effect though if almost half of lorry drivers do not know the height of their load. 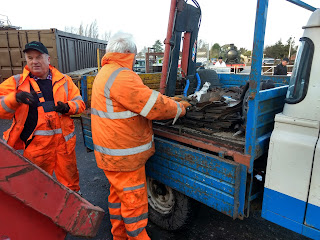 Elsewhere today the GWSR PWay gang took up the track on Gotherington Skew bridge, which is due some regular repair and maintenance with its deck exposed. Trains have stopped running now.

Here they are taking some track components to the recycling skip, as the track will be relaid over the bridge after the works with more modern materials. 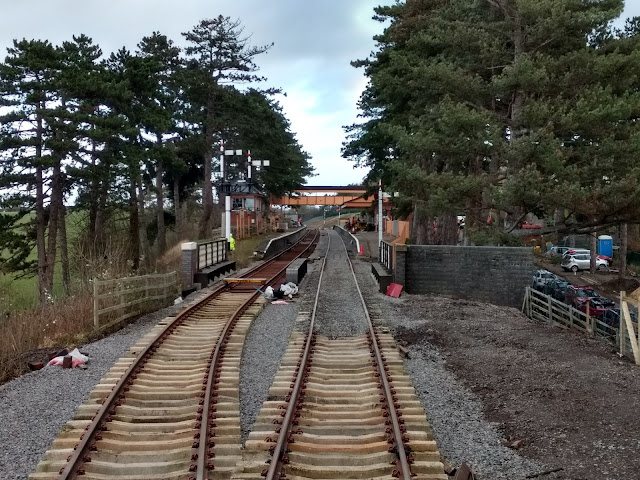 At Broadway you can see that the track over the bridge is on wooden sleepers. This is to save weight, and to give some more elasticity to the stresses imposed by the passing of a heavy steam loco.
In the picture you can also see that the ballast drop a couple of weeks ago has been levelled off by Stevie in the mini digger. More ballast will be dropped shortly. 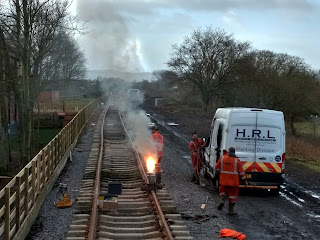 Looking the other way, this time from the balcony of the SHARK brake, you can see that one of the Haigh Rail crews has just set off their reaction, with evidence of the immense heat released coming out of the top of the vessel. 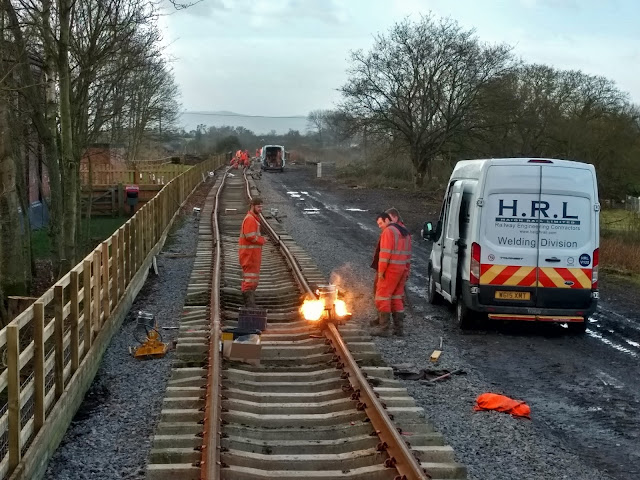 Shortly afterwards the surplus flowed out into the two side vessels. All 18 welds were completed today, so this bit of track is now ready for final tweaking and some ballast into it. 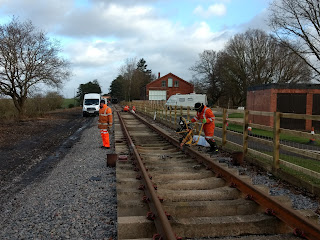 The last job after welding is to get the grinder out to smooth off the excess metal on top, and to make it undetectable by the passing wheel. 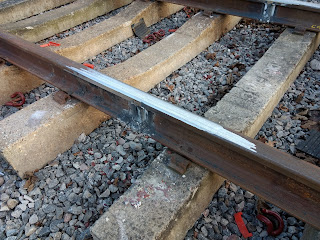 This is what it looks like when it's finished. very neat, and smooth.

The two adjacent Pandrols were not fitted so as to allow the crew the chance to position the two rail ends exactly in line. All these welds still need to have the pads, plastics and Pandrols put back on. A job for next week.


At the end of the day we were happy that all the welds had been completed, despite the initial misgivings about the expansion and contraction of the metal moving the gaps about. All is now well; there's just more clipping up to do (not to mention the 3/4 clips to be put in near Peasebrook on the last CWR stretch). So plenty of work still on our plate.

Before going home, we popped in to Broadway station for a chat and a picture, which we will share with you here. 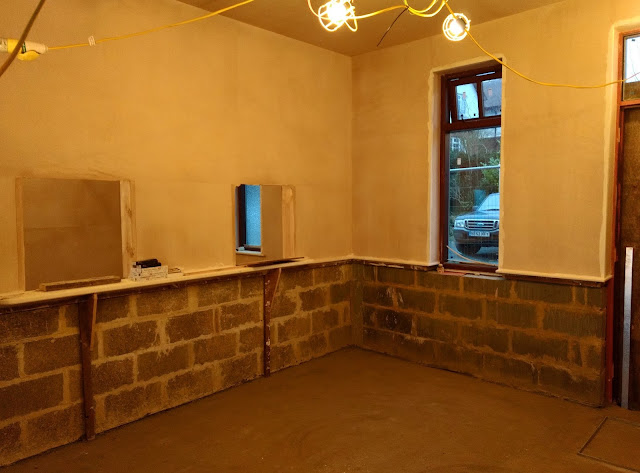 It's the booking office, really starting to look like something now. The walls are plastered, the floor screed is in, a mat well has been created, the supports for the wainscoting are fixed to the walls, and the holes for the ticket hatches are in place. The hatches themselves will be copies of originals found, after much searching, further up the N Warwickshire Line into Birmingham at Yardley Wood. We think it is the only original left on the line. The hatch at Toddington is not original, being merely an opening for ticket sales made into an outside window. The original booking office was where the shop is today (which was knocked through into the original ticket office/stationmaster's room). Perhaps one day this could be restored, and a new shop/restaurant/admin block built in heritage style across the drive to replace the containers there? Now there's an idea....