Strange trains in the mist

It was a misty, very atmospheric day today. The night was clear until 5am, and then warm air met cold and the Cotswolds were shrouded in a damp, eerie blanket.

It hid our mess coach. Where was it? It wasn't in front of the loco shed any more. Who knows where it's gone? Anyone? 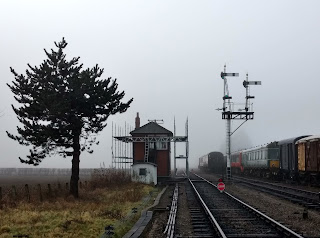 Then there was a toot in the distance - ah, the shunter's about. It turned out to be propelling the RATS coach and our mess coach with it - see it?
The signal box is now surrounded in scaffolding, and there is indeed (blog comment previously) a STOP board out. And you can see why too, the scaffolding goes right up to the rails. 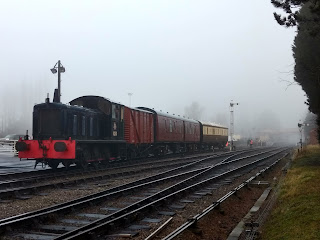 The train in the mist slowly trundled past, and propelled our mess coach back into the bay siding.
Paul was in a foul temper, and told everyone so. We stayed well clear. We have been warned! There was no electricity on site, so the tea was made exclusively with gas, and we had to hook the water suppy up again all over. 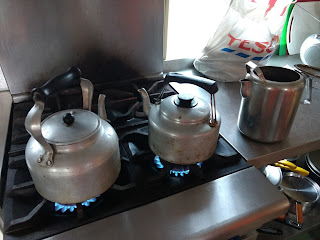 Here are two kettles bubbling away merrily, and next door 20 faces are straining to see where it is. The teapot is next to them, and if you hurry, you get a weak tea, and if you are patient, you might get a strong one, or none at all. 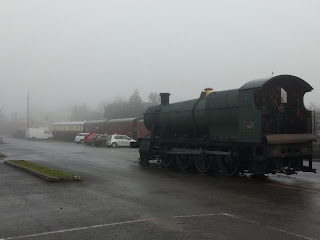 Outside was the strange silhouette of 2807 covered in a dull blanket of misty droplets. Was it coming or going? We didn't know, but it was very atmospheric. 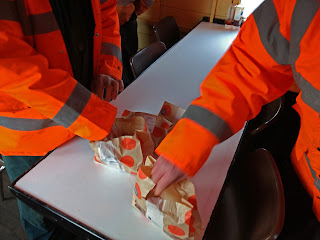 Back inside, Paul threw 4 bags of doughnuts into the baying crowd. They were soon gone.

Who'd miss out on a doughnut with his tea? 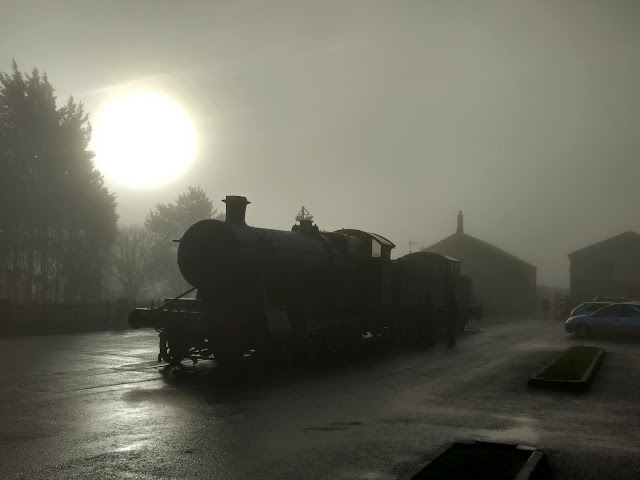 Outside, the shunter now brought a tender up for 2807. The sun was a huge ball in the misty sky, trying but not quite managing to break through. Spooky.

Inside, Dave got up to make his daily briefing. We had lots of small jobs today, so you could choose. The Landie was taken to Winchcombe, the Telehandler came to Toddy to wait for a delivery of point timbers, another lot went to work on the diesel shed road again, and the main gang went to Broadway to walk south while checking the track as we went for missing clips or pads, until we reached the main 'Clippathon' area at Peasebrook. Here thousands of pandrols remained to be pulled in after the stressing excercise. 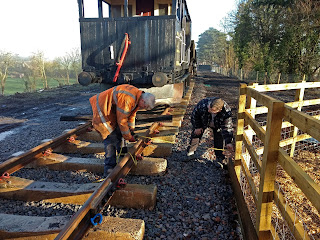 Stevie was going to dig out the canopy / footbridge steps foundation holes at Broadway, but at the last minute the job was deferred to next Monday, and instead he set off with Andy to 'tweak' the goods shed stretch into an orderly curve, to make it ready for ballasting.
Here you can see them checking the first distance from the fence, with a bit of left over tape measure, discarded on site. Well, the inches are still correct! 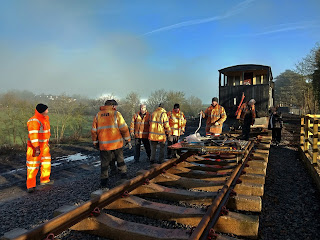 The main gang took the Permaquip trolley and loaded up the tools required for clipping up at Peasebrook. Rick was the 'propelling loco' but soon complained that the brake, recently fitted with a replacement but much stronger spring, was very heavy to hold down as he went along. 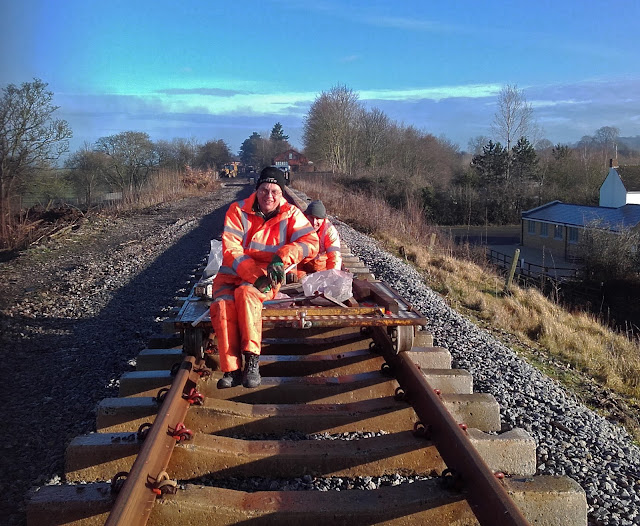 A volunteeer soon stepped forward, willing to sit on the stiff brake lever. Incidentally also having himself pushed the half mile to Peasebrook. Ah, so not so selfless as it first seemed. 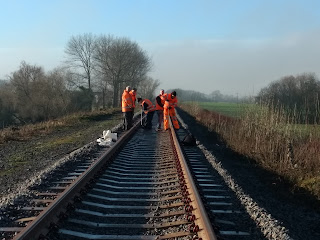 This was the northern end of the clipping up section. Nice row of clips in the foreground, and a bit of a battleground behind where clips and plastics were scattered about rather randomly, needing to be inserted into every sleeper before pulling in. 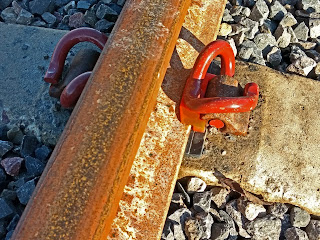 This is what we are trying to achive: An orange  plastic spacer under the Pandrol clip, which fits nicely into a gap between the foot of the rail and the loop on the sleeper. It needs a gap of about 5mm. If it fits snugly, you can pull the Pandrol clip in on top of it. Job done. 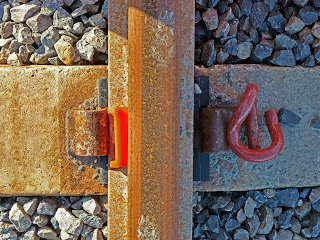 Then along comes real life. The sleeper is a bit to one side, so a big gap on the right, and no gap at all on the left. The plastic spacer won't go in.

You need to move the sleeper along a few mm, but it resists, having been tamped solid, and ballast dropped at each end, precisely so that it doesn't move. But we want it to move. This conundrum is what makes the job so slow. 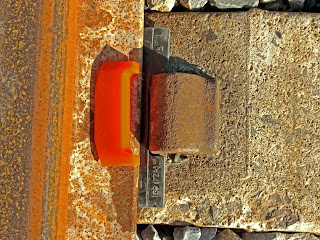 Here's the correct space required, and a plastic spacer ready to go in.

It took is ages to work out the best way of moving the sleeper sideways, a combination of special 'lifters' and, if the rail was found to be resting squarely on the rail, Duff jacks next to the sleepers to lift the rail up a bit to ease the weight. A bit of persuasion with a bar and a keying hammer also worked if there was reluctance to move. Blunt, but effective. 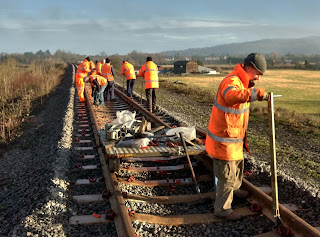 Here you see the team split into two units, with Rob in the foreground working the puller where it worked, and frustration in the background where it didn't. It meant carting the heavy Duff jacks back and forth and heaving on the 'lifters'.
We did eventually sort out each case we met, and so doing achieved a tick off of about one third of the Clippathon section. We are now in sight of the central pulling point. More next week, but we broke the back of it today.
Further pictures of this job were frustrated by the new camera, which uploaded 6 pictures to the desktop on which the blog is written, but which proved to be corrupted on arrival and could not be used. We suspect an issue with the Micro SD card where the pictures are saved on camera, as most pictures seem to get through OK. But....

... we have other interesting pictures, which did make it off the camera and on to the production PC: 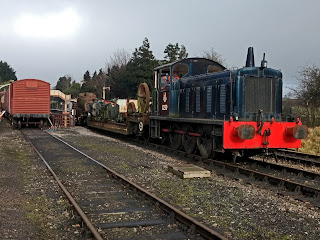 As we went to lunch in the mess coach, this train trundled by cautiously. What was it doing, we never get this sort of movement? Got to be something special. 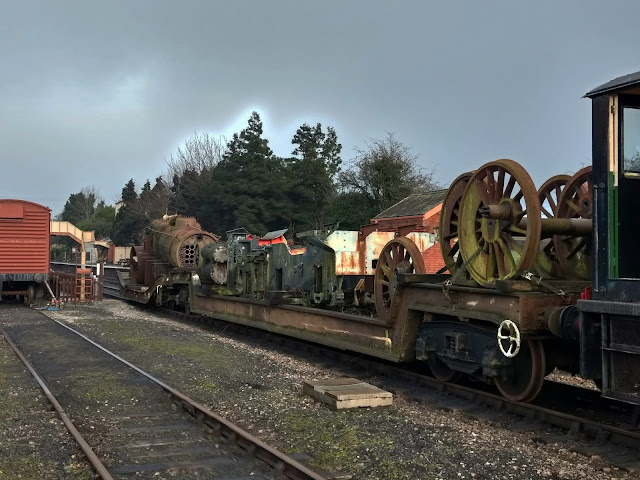 It was indeed something special, it was 76077 in kit form being taken off the Toddington headshunt after years and years of storage there.

Look at the 31.12.2017 loco dept blog for the story, but there's been a breakthrough with the Standard 4 76077, and work will now start on it. If we understand it correctly, the parts were being taken to the loco yard so that the frames could be dispatched to Loughborough for reassembly. Brilliant ! 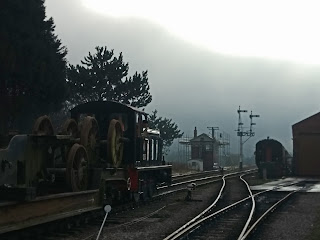 The little 03 shunter trundled off into the mist, with a kit of parts for an 11 year old locomotive in tow. Yes, that's all the time it was ever in service. The pieces in kit form are said to be in quite good condition as a result of this only brief period in operational service. 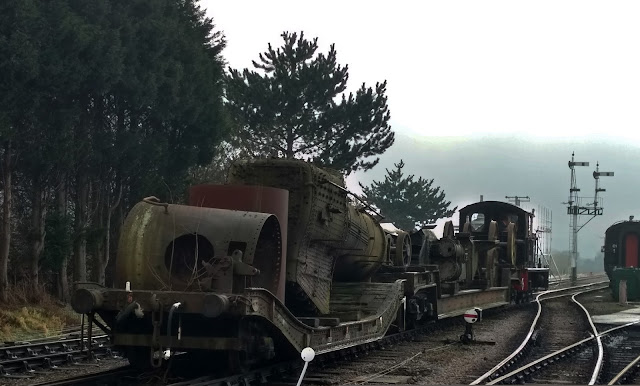 Here's the back end. Check out the next issue of the Cornishman for the full story of this thrilling development. 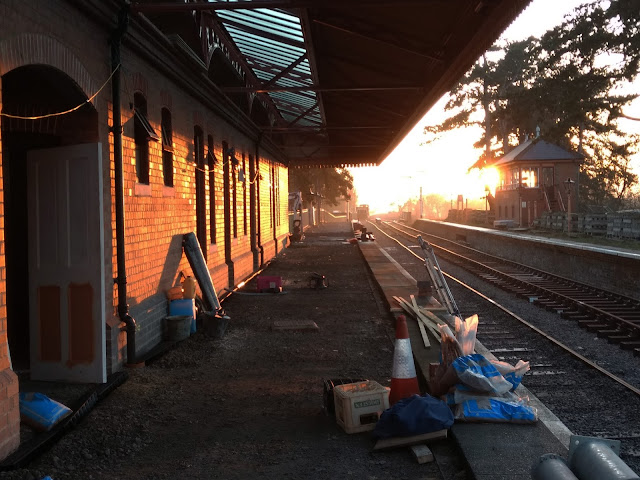 After the close of play we made a quick visit to Broadway for an update on various items on which we have lent an hand. The tilers have almost finished the red clay tiled floor of the gents, and were starting on the white, brick shaped tiles that are going on the walls. Check their station blog for more details:
http://broadwaystationgroup.blogspot.co.uk/ 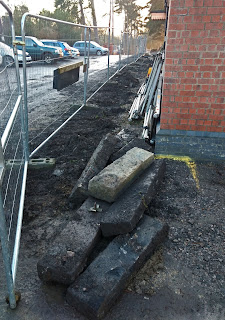 On the forecourt outside the building, excavations were held today to see if any more granite kerbs could be found from the original station. The answer was yes! Another 7 were found underground. These will be added to those found during the excavations of the building foundations, plus a lot donated by the Toddington loco dept, and a balance bought from a reclamation yard, to give the forecourt a complete set of granite kerbs all along the replica building. No modern concrete in front of our 1904 station! 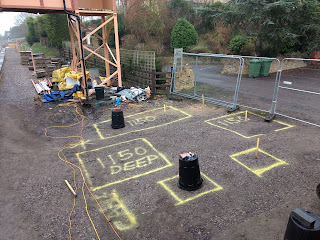 The second piece of news is that the foundations for the footbridge step supports, and the canopy overhang, have been marked out. A design has been agreed and signed off. The foundations will be dug out next week and filled with concrete, so that the platform and circulation areas can be made ready for public use. While we now have an agreed design for a near replica for the canopy overhang, there is currently no money available to actually build it. 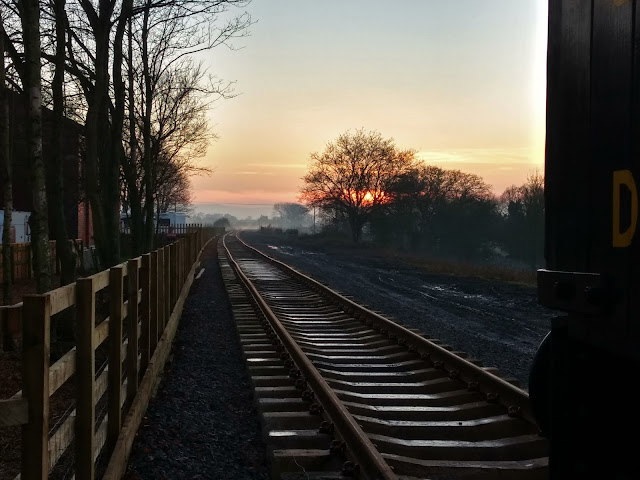 As the sun went down, there was just time to photograph the work done by Andy and Steve on the curve into the station. They have 'tweaked' it to perfection. The tamper will do the rest. 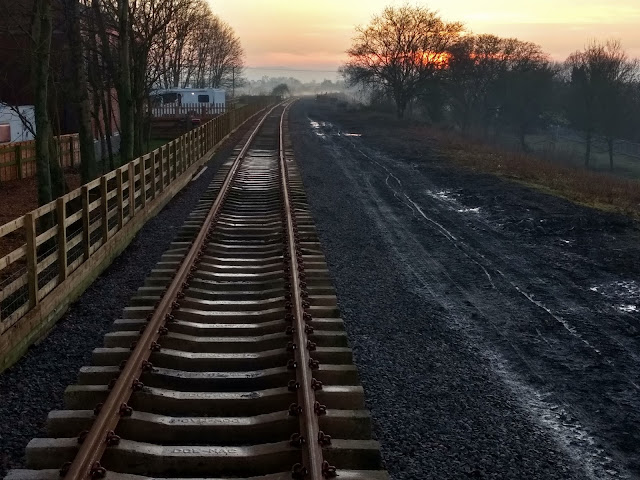 You can see how the curve stretches into the distance in one continuous line. No more kinks here! Now it's time for ballast, which we hope will be dropped some time next week.