Wasn't that a cartoon character somewhere? It's how our day felt today - two whole degrees plus in the morning, and one-and-a-half in the afternoon. And almost incessant rain. We ploughed on at Toddington, there not being enough volunteers to form a splinter group for Broadway. We were barely more than a dozen today. 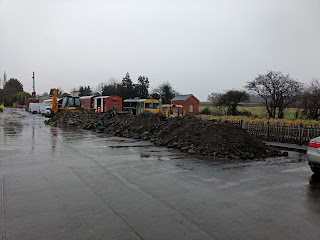 We couldn't park in our usual place by the mess coach, because that space was occupied by the material excavated from the trench for the sewage pipe being dug up the station appoach.

We loaded our gear into Stevie's front bucket. Steve was sitting pretty, high up in the warm and dry cab of his JCB. We mortals plodded to work in the rain. 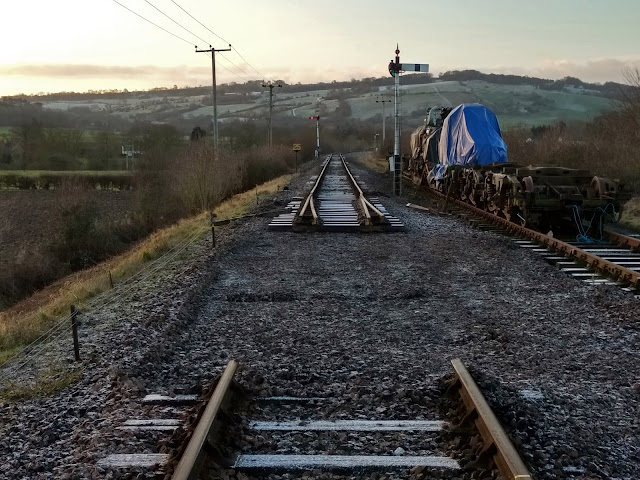 This was the site at opening today (actually photographed on a nice dry but cold day a few days ago).
The two switches of the main line have been laid in, but are not yet screwed down. 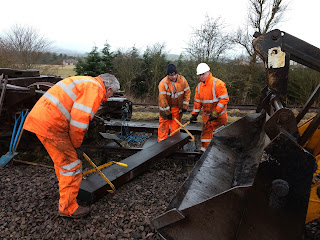 There were two missing timbers at the south end, which need to be longer so that the point operating mechanism can be attached. These were dragged in with nips, and with the rain the already heavy Jarrah sleepers seemed even weightier still today.

Here a short one is lifted into the front bucket of the JCB. One more lifter required... 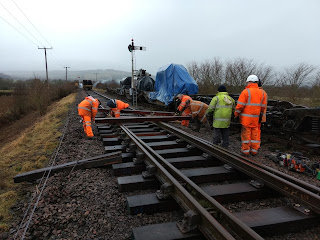 The correct, much longer timbers were then positioned on top of the switches and dragged in with the nips. 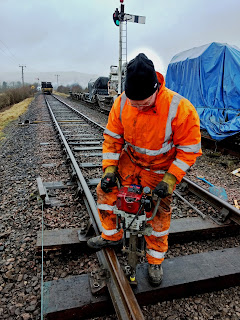 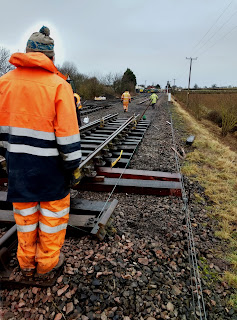 A line was drawn from one end of the turnout to the other, to allow the timbers to be correctly positioned. At the southern end Tony had the drill out and was drilling through the chairs into the Jarrah sleepers. This was also hard work, the wood is very tough, but that's why we buy them! 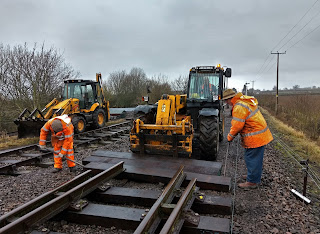 At the northern end Alan was delivering sets of timbers, which we laid out along the line on the right. There were long gaps between deliveries, as for every two or three timbers he had to drive all the way back to the station car park and pick out the right ones - their lengths are written on the ends, but what it said there was not always true... 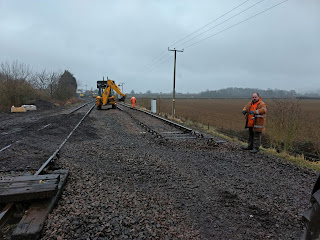 Eventually we ran out of space, and it was decided to left the next length out as well. This area will eventually be relaid anyway, and with the crossover going in here it will be difficult to reach, so we could usefully do it now. Steve is giving the rail a good tug, to get it out of the chairs. 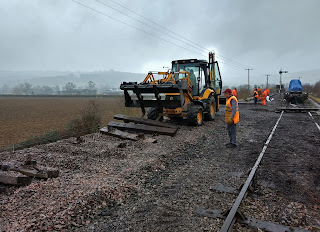 With the rail removed Steve returned to lift out the sleepers in bunches. These were taken to one side for revaluation, and those that are really scrap had their chairs removed, in particular the old GWR type throughbolters.

Old hand Ivor keeps an eye on this process.


Richard here had seen the grimly fiendish weather forecast, and had armed himself with a flask of lovely hot coffee. Just the thing on this cold and rainy day, a bit of hot coffee. 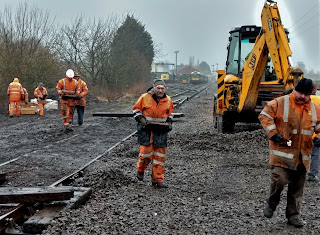 We waited and waited for the next load of timbers, and finally decided that to keep us warm we would form a sort of bucket chain and go and empty a pallet in the background of heavy Pan 11 base plates. That certainly worked, for a few moments we were indeed much warmer.

Another option was to look at our watches to see if it wasn't lunch time. 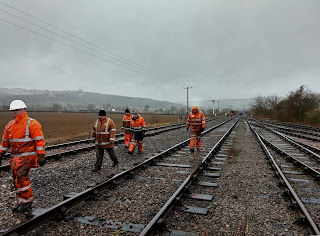 And it was! Now there's a coincidence. Wearily the sodden wet workers trudge back to the mess coach, where it was warm and dry - and damp, with all the wet clothing being brought in. In fact Chris noticed that when he left after lunch, he was steaming as he stepped outside. Strange phenomenon. 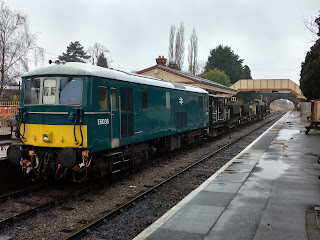 Behind the mess coach at Toddington the class 73 was seen parked in the platform with the empty ballast train.

The date of the next ballast drop is not yet known, but we can do at least another one before we need to cross bridge 1.


Did you know that there is a bridges blog update on the repairs to bridge 1 at Broadway? You can click here to read a progress update:

In a few days we will also post an update on the repairs to bridge 34, the skew bridge at Gotherington. 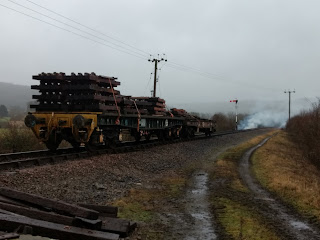 South of the work site a couple of Warflats have been brought up loaded with sleepers, and the crossing for the turnout we are building.


While the gang at the switches end was devoting considerable effort to drilling the holes into the tough, hardwood sleepers, Nigel was consulting the master plan which shows him the exact position of every rail and sleeper on this C9 turnout. 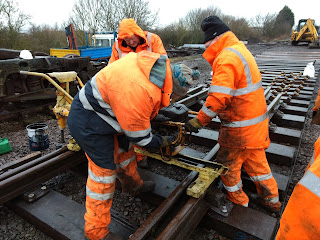 Our usual 'Animal' motorised nut runner proved somewhat underpowered on this job, and a couple of us set off in the Landie for Winchcombe to get heavier guns - a diesel powered Stumec chairscrew unit.

This was heaved on to its trolley on the track, but it then resisted all efforts to start it. Mean thing. 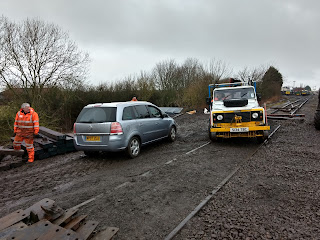 We had 3 vehicles on site, a narrow single track road alongside a double track railway. To our amazement a Vauxhall estate car suddenly appeared in the deep mud and wanted to get past. Both Steve and Stevie obliged by squeezing to one side, whereupon same car reappeared again a few minutes later to drive by the other way. 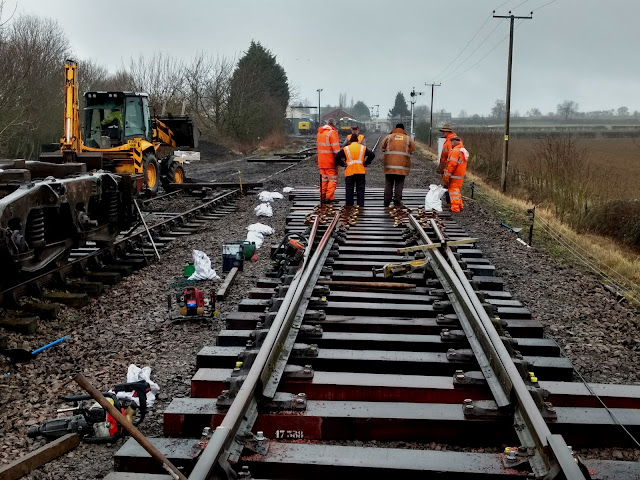 After lunch and a few more timbers fetched by Alan the construction of the turnout was sufficiently advanced to try and position the central crossing, which was loaded on the Warflat as mentioned earlier. This was duly retrieved. 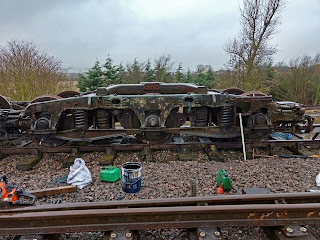 Did you notice those strange bogies on the left? They are huge. What an interesting design.

They are spares for a class 47, we ascertained. 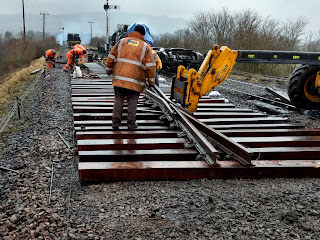 A few minutes later the crossing was more or less in place in the middle of the new turnout, but still needed tweaking into its exact position, as specified in the frequently consulted drawing. 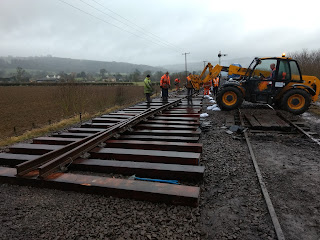 Alan was asked to give it some final prods here and there, and Stevie also lifted it along a few inches. Not bad for a first attempt.

Next we have to replace some base plates on it, and move the timbers under it fore and aft, so that they are exactly underneath a base plate each, ready for drilling. Closure and stock rails will link the crossing to the switches. They are short, and can be lifted in a lot more easily.


At the end of the day the two switches were fully drilled (see the orange shavings around each base plate), the next lot of timbers located, sorted and laid out, and the crossing roughly positioned on top.

Next week will see us screw the crossing down, and fit the 4 stock and closure rails. We also need to relay the panel of plain track we lifted today, and then the through line will be reinstalled again, but for ballasting and tamping.

Then it's time to start work on the other half ot he crossover, the turnout on the headshunt. This is currently somewhat lower than the running line, and will need to be raised to the same level.
Posted by Jo at 20:19