The smell of the grease, the roar of the crowd

Medium sized gang today, dare we split it into two? We dared.

The main gang trudged in the rain over to the pointwork being relaid at Toddington south. 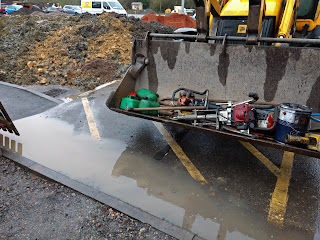 We had the generous bucket of Stevie to help us carry the tools the 500m or so. Notice the sneaky puddle into which you will step when you have something heavy to drop into the bucket. Too late ! The squelch will follow you for the rest of the day. 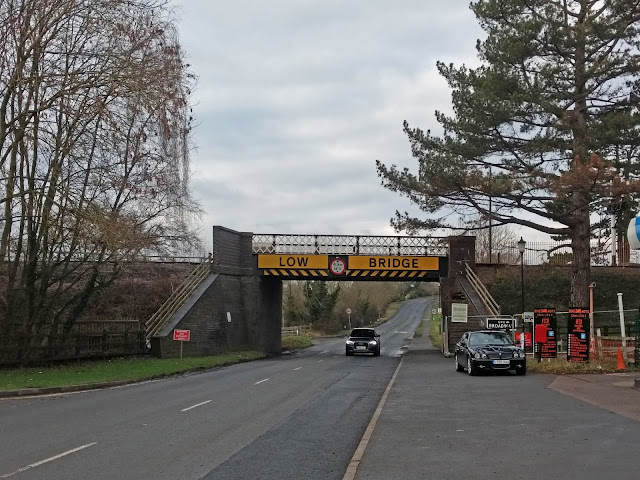 A smaller delegation of two repaired to Broadway on a special mission to check the clearances on the P2 track, so that a ballasting train can safely pass ('safely' here means without scratching Neil's cherished class 73!)

On arrival - whoa! - the bridge is open, and what a great and very striking warning sign it now bears. In fact on leaving Broadway village half a mile away, the first thing you see as you drive down station road is the word 'LOW' in the distance. It should prevent a few strikes, and further measures are being seriously contemplated. It's a bit early still to say what, so let's wait until things are signed. 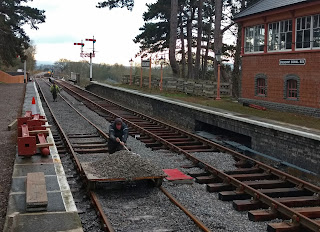 Between the platforms a barrow of ballast was propelled into the station. 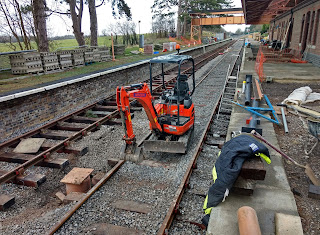 The destination was this mini digger, which had just installed an extra catchpit where the station storm drains feed into the track centre drains. 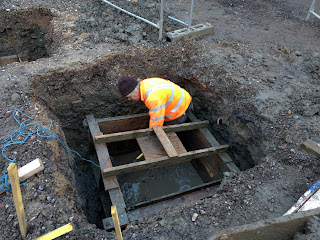 Even on non-working days at Broadway there is someone on site now. Here Neal is giving the shuttering for one of the canopy extension supports a final tweak so that it sits exactly in the right position. It's wet down there, we are in original clay here and water seeps in all the time. There is a submersible pump to keep things dry-ish; it won't have to work long because the concrete pour is taking place on Tuesday. 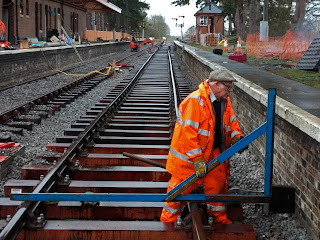 On to the track for the job that we came to do.

We have to ensure with this gauge that the rail is at least a certain minimum distance away from the platform edge, all the way through.

It's not the final position, because the proximity to the edge will change when the track is tamped. If the level part of the gauge changes, then so will the upright. 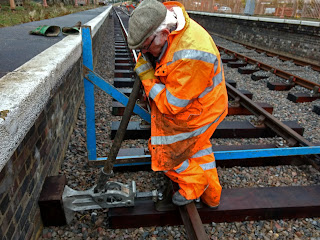 At this stage all we are interested in is a proper clearance all the way through. More ballast trains are in the air, date to be confirmed, but it will be next week.

Most of the track was indeed a bit tight, so we jacked it out an inch or two most of the way along. All in the rain, while the Broadway gang ferried slabs in the dry. We're in the wrong gang here... 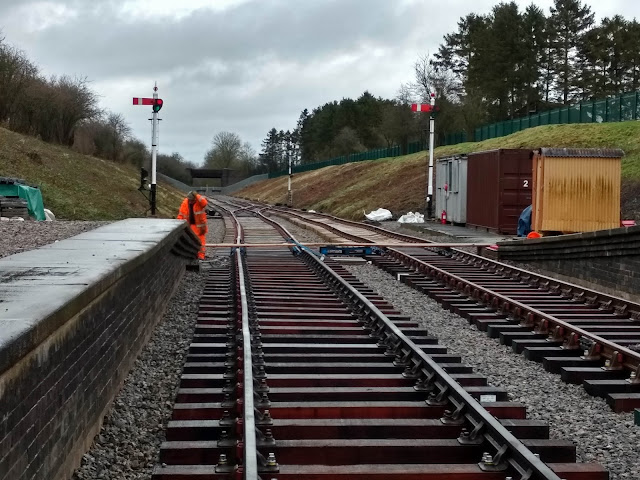 At the southern end there is a bit of a kink, caused by the proximity of the catch pit in the centre, and the fact that the track laid followed the platform slabs, which swing away a little here. You can't see that, but they do. We managed about three quarters of the 200m before it was time for lunch in the mess coach. We didn't want ot miss any of Mrs. B's most excellent cake, so hurried back to Toddy. 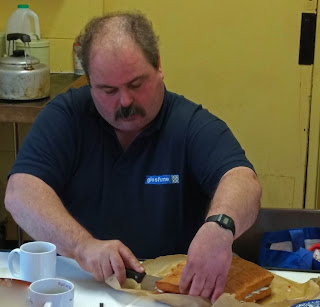 Just in time, as it turned out. Nigel was already cutting it into slices. If you were really fast, there was actually a choice of chocolate or vanilla. Or both... 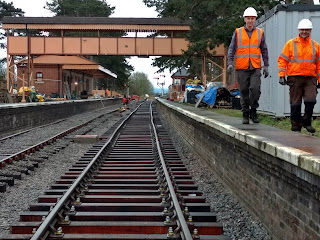 Back to work after lunch, to finish off the last 50m or so. Behind us in this view here the track looked pretty straight, but what mattered was that it was always sufficiently clear of the platform edge.

During our work we were intercepted by a security patrol from the Broadway gang. We managed to persuade them of our honest intentions. 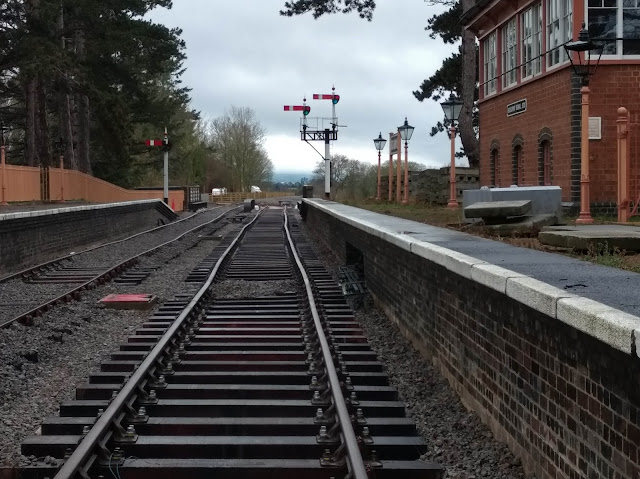 We did the whole platform length, except for this bit outside the signal box, which was buried in ballast and could not be shifted by mere mortals such as us. Stevie will nudge it into place on Monday with the mini digger here, no probs. 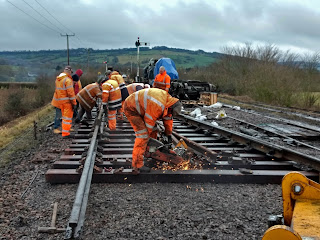 For the last hour or so we went on to Toddington south, where the main gang was in full swing, in now drier weather. Here is Chris adjusting the length of one of the rails in the crossing. 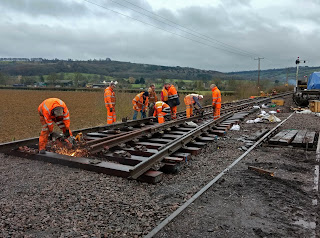 It all sounded very busy indeed - Telehandler, JCB, disc cutter, rail drill, and 'Animal', at times all going off together. But now you can see how nicely the new turnout is shaping up. 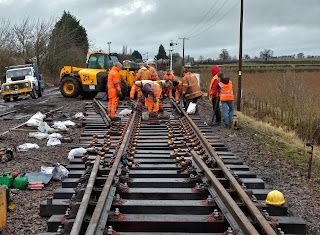 On the right two stock (straight) rails have been fitted, the second with check rails where the gang is standing. It's not as easy to assemble as it looks. Obviously it was a turnout before, but when you fit it with new sleepers and reassemble it from a kit of parts that's been lying in the undergrowth everything seems to have moved a bit. 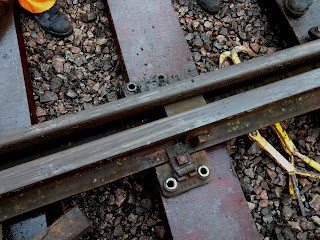 Here's an example of something that's moved. This base plate was pushed under and on top of the new sleepers, but it won't go any further because the clip on top is interfering with the nut on the check rail. Now the top LH chair screw hole is off the sleeper. We 'put that one in a box' and will come back to it later. 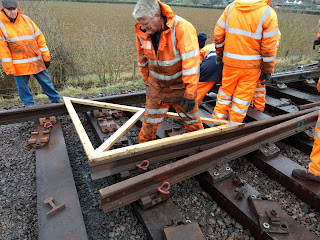 The stock rail at the rear is too long and needs cutting to size, parallel with the end of the crossing. To check the position we resort to Pythagoras and his right angled triangle.

It still works! After all these centuries.

Chris was about to cut the stock rail to size when a warning came from the centre that the crossing was going to be nudged an inch towards Toddington. Just as well he hadn't started yet. 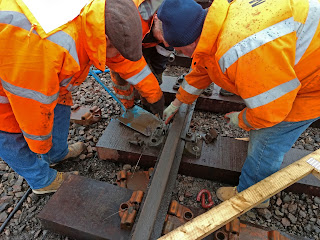 Meanwhile, Jim and Paul were doing up the base plates but found that the bolt for the clip wouldn't go into its holes. Remember that these rails have been dragged out of the undergrowth and through the mud on site. The culprit was eventually found and removed from its hiding place at the bottom of the bolt hole - it was a stone. Of course. Cheeky thing, but we found you! 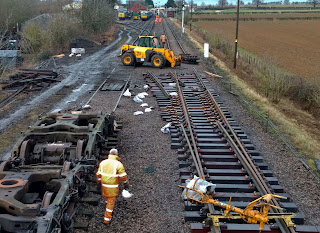 Four o'clock soon came. The evenings are brighter now; we used to knock off at dusk at three o'clock. Here's a view of the turnout so far - can you see what it is yet? We've got a closure rail and another stock rail still to go, and most of the bits at the far end to be screwed down too. Then replace the plain track by the Telehandler, then start on the other turnout, and associated raising of the headshunt, which is currently lower than the main line. Plenty of fun to go still. 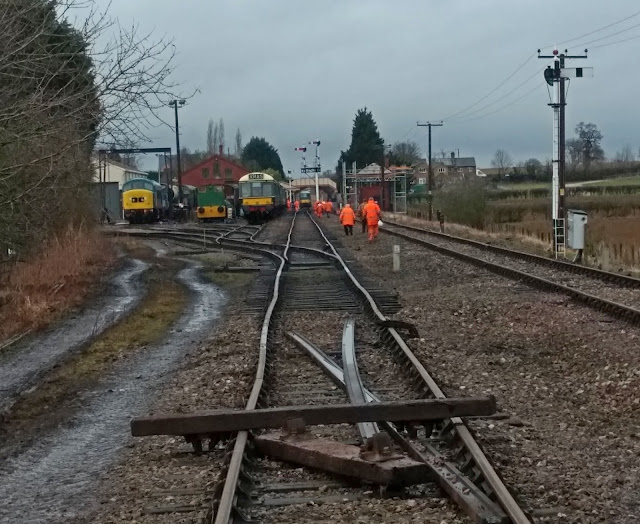 The gang trudges home as the sun goes down. That's not quite right though, as there was no sun, but it got less bright and that light would soon go out. Now to strip off the oily, sodden clothing, and try to keep that car clean too, for the ride home. 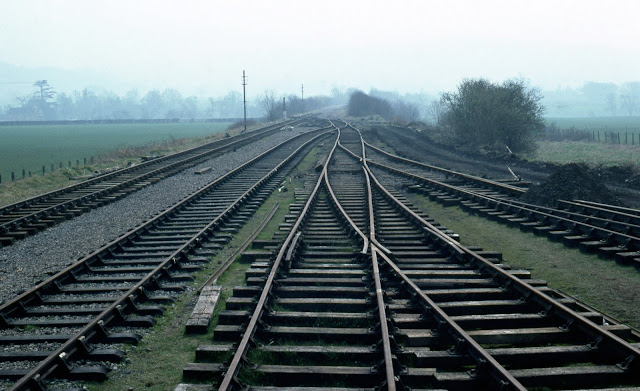 To finish with, here's a blast from the past, with a shot of the same area (in the distance). It was taken in 1982 by John Lees, a PWay gang member then, and a PWay gang member today. There must be something about the spirit in this gang to stick with it for so long. Certainly there is excellent cameraderie.

The track in the picture was laid during 1982, and prior to the start of laying the running line out towards Winchcombe, so in this picture the track laid peters out beyond the yard throat. By the big bush, that's where we are working today. It doesn't look quite right, it looks as if in the distance they used a RH turnout where they should have laid a LH one. Means must in those days, we mustn't crticise. You laid what you had, and were glad of it.

Last but not least, here is an interesting BTF film made perhaps in the late 1950s about how track replacement can be (sort of) mechanised.
https://youtu.be/8I3QM0PBn0A

Hope you enjoy it, as we did. Such nostalgia...


PS Last, last thing: an update on the bridges blog, take a look, as it's no longer on the main website blog list:
http://bridgestobroadway.blogspot.co.uk/2018/01/work-on-bridge-34-at-gotherington.html