Under a blazing blue sky the track gang returned to Peasebrook Farm bridge today, to resume track laying, interupted by the stressing process the last two weeks. An exciting prospect was the expected arrival of the mess coach and two wagons at the railhead. Would they be there? The landie had to be retrieved from Toddington, the Telehandler from Winchcombe, and the JCB from Broadway. 'Meet at Peasebrook' was the message, but this was a good half mile walk from the nearest road access point. 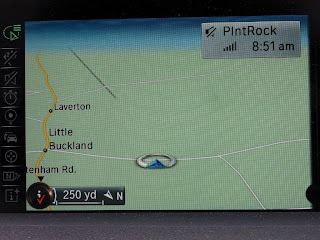 This screenshot from the SatNav in the car shows you that, parked up at Little Buckland bridge, we are indeed miles from anywhere, and the limit of operation at Laverton ends in the middle of nowhere. In fact track now actually extends to below the bottom of the screen, so need to update the SatNav data!

To our delight, the mess train was indeed at Peasebrook. Happy days ! Without having to wait for transport or the full gang, three of us set about assembling the tools we needed for the day. 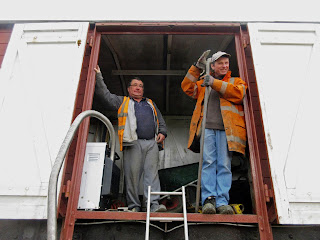 Of course Steve has seen it all before (after 28 years of working with the railway) but Phil was happy enough to give a wave, before dishing out more bars. 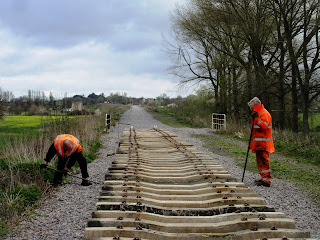 The situation at Peasebrook was such that 150 sleepers had been laid last time, and this extended to within two sleepers of the Peasebrook farm underbridge. The first job then was to straighten up those 150 sleepers, so that rail could be laid on them. Not only do we want to continue laying track, but we need to clear the bogie flats of rail for the next delivery later this month, and for further sleepers to be loaded at Gotherington.

Here Pete and Tony react to calls of 'Malvern' and 'Cotswolds' to get the sleepers straight enough for rails to be dropped into their beds. The actual line of the rack is adjusted later, once it is partially clipped up. 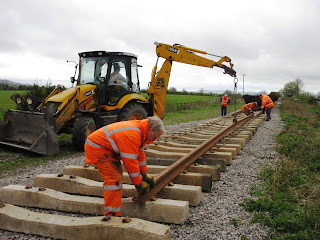 Behind the camera, another team is laying rails on to those same 150 sleepers.
Wait, didn't we see Tony in the previous picture?

Well, this is the sort of photographic trickery we have to resort to to swell our modest gang, 13 souls strong today.

It's volunteer recruitment day tomorrow, and we will have a stall at Winchcombe in the C&W shed - fancy joining us? Do drop in and say hello. 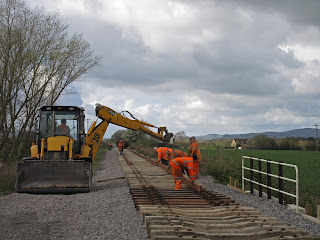 The sleeper laying gang has now moved on to laying additional sleepers, with 9 hardwood ones on top of the bridge itself, then carrying on in concrete again. 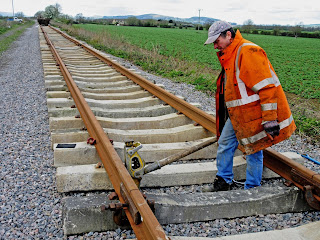 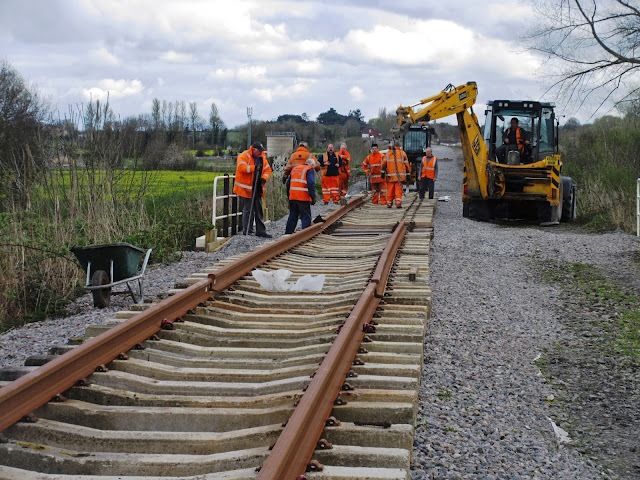 Most of the gang today seemed to have accumulated in this picture, as the first rail beyond Peasebrook Farm goes in. The wheelbarrow is needed to move Pandrol clips to the advancing railhead. A pandrol clip is not that heavy, but 100 of them are. They all come out of that box van, which is about 1/4 mile away, when it's near. 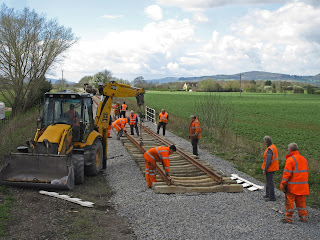 By lunch time, the rail laying team had caught up the sleeper laying team, which only had the less convenient Telehandler to work with. It was decided to stop for lunch, and after lunch concentrate on clearing the bogie flats of the remaining sleepers, of which there 170 at the start of the day. 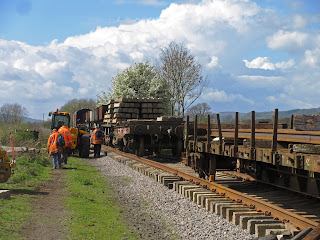 The team made off for the mess coach, now only a short walk away, past the rail wagon and the sleeper wagon. The 6 Dogfish are also up here, waiting to be refilled. 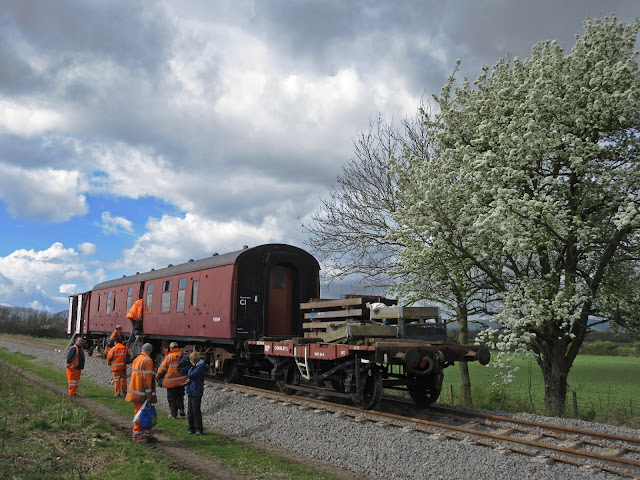 Here is the mess coach at last, parked up on the Gloucestershire-Worcestershire border. We're in the middle of countryside here, and spring is upon us. 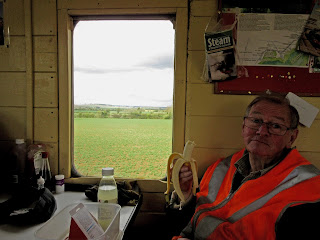 Look at the view we get now! No more staring at rusty wagons in Winchcombe while we eat, this is the Vale of Evesham now.

Why aren't you looking out of the window, Pete?

It seems those on the right were looking out of the windows on the left (and vice-versa) so Pete was enjoying the view of the Cotswolds edge, behind the camera (if only it would get out of the way).


Sadly, no Maitre Jim and his gastronomic tours de force today, we're all allowed a holiday. We were however treated once again to slices of Mrs. B's most excellent cake, which went a long way to make up for the bread and pullet most of us were on. The lucky ones had a banana..... 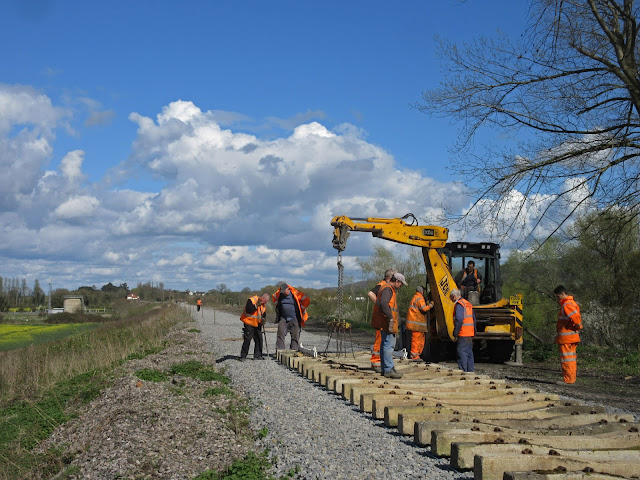 After lunch, we all concentrated on sleeper laying, with the much more efficient combination of Telehandler on supply of sleepers, and the JCB on actually laying them. In the background, the sewage farm starts to come into view. 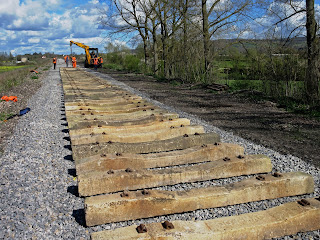 Laying 4 sleepers at a time, it really went quite quickly, and they were in a nice straight line too. The job can be done by the Telehandler alone, but the result is a more wiggly track, as the Telehandler driver is less able to see the line, and the line is often pushed out of position by its wheels. 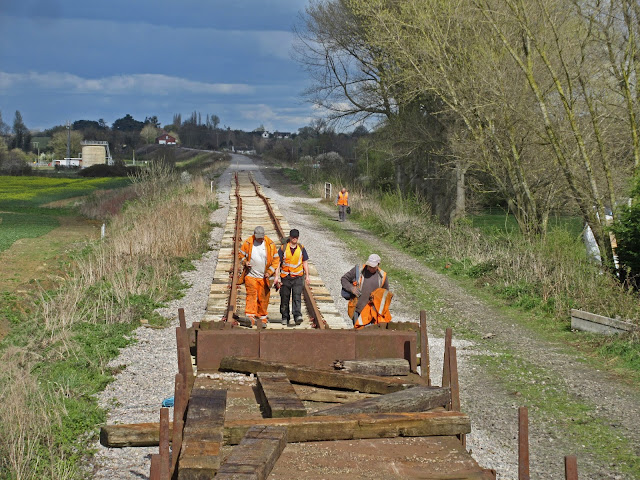 We got rid of all the concrete sleepers, and started on laying more rails again, when the JCB failed with a broken control rod. So in total we laid 170 sleepers, and 9 pairs of rails (162m) with another 8 rails left on the wagon for next time.
Here the team heads home. We could have laid all the rails, but this was already a good result. 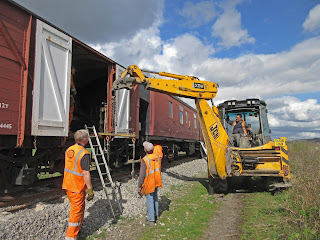 Tidying up the site and putting the tools away was a breeze. We put everything in the front bucket of the JCB, and drove it to the box van. The heavy stuff was lifted in directly by the jib!

The first day with the mess coach on site was a big success.

On Friday our little gang of 4, one loading, one levelling, and two on dumpers ferrying, had another good day bringing in the type 1 infill to Broadway north. 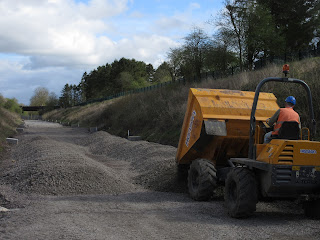 The lighter patch in the background is the track ballast, and the darker piles in the foreground is the type 1 sub base. This is cheaper than ballast, and is used to raise the levels, before the ballast goes down. The need is greater at the platform end, hence bigger piles. 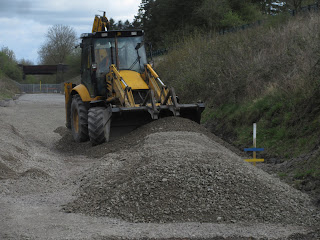 Steve then came along and spread the type 1 across the trackbed, and made sure that the height was correct, bearing in mind the indications on the post on the right. The JCB is perfect for the job, especially as it has a split front bucket, with which it can also rake. 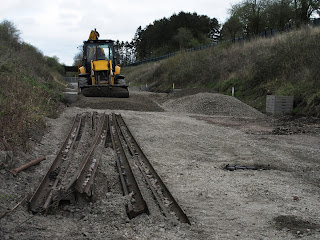 The piles of type 1 have now reached the new storage area for rail, here in the foreground. 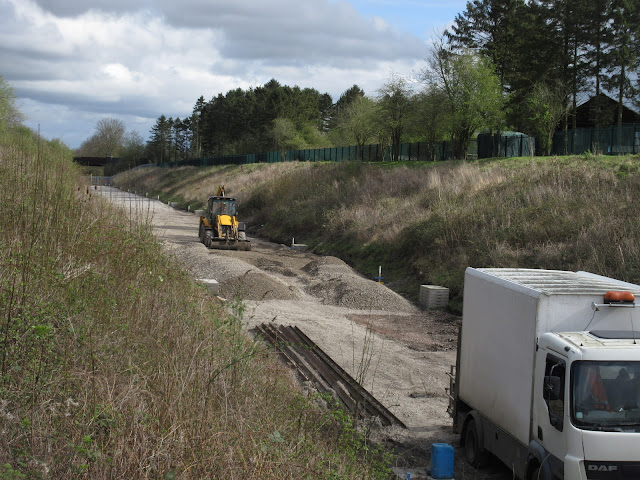 In this picture you can see almost the full 350m to be treated by us. By the end of Friday, we had almost achieved this. The type 1 then has to be rolled, and once compacted, the actual track ballast will go on it, up to the blue indicators on the posts. We will do this early next week.

We could have done a bit more on Friday, but once again, a plant failure held us back. This time it was a puncture in the tyre of one of the dumpers, so in the afternoon, we were down to one dumper, still OK, but slower. 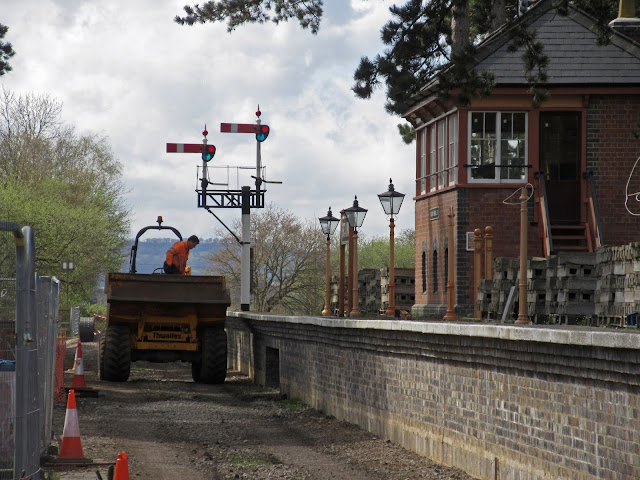 A call to the plant hire company was answered. Phew! Good service too. Permit us a small niggle, but this is a big 9 tonner. Will it fit my garage? Have to get it down this trackbed first....

What a magnificent sight this now is, with the bracket signal, GWR signal box, ball topped gate posts, running in board and replica lamp posts with tops. All installed by us, where there was nothing but a bare site before. We hope that the concrete troughing will find a new home before opening day.

Finally, this is not an April fool, but we suffered yet another bridge strike on Friday, only a month after the last one. 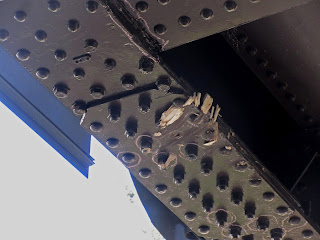 Looking at the wreckage stuck to the main girder and down on the road, could it be that the culprit suffered more damage than we did? The circles round the missing rivets are from the bridge inspection the previous day.

Work will continue at Broadway north on Monday.
Posted by Jo at 18:38